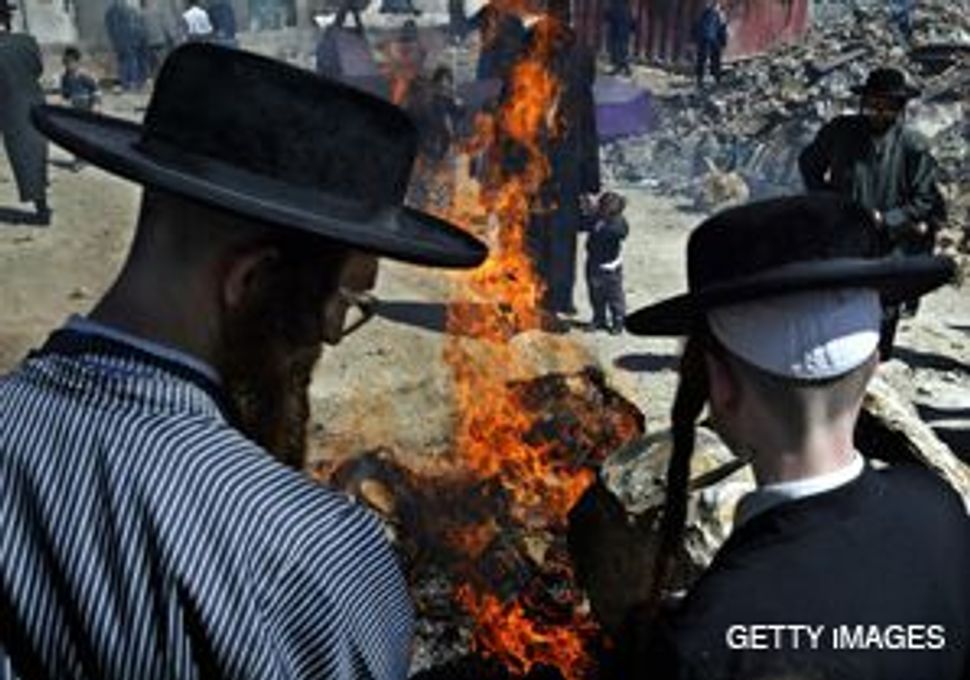 NO TRACE: Ultra Orthodox burn bread before the start of Passover at a ceremony in Jerusalem.

Haifa, Israel – Israel’s restive religious parties exploded in fury last week after a court gave an apparent carte blanche to shops and restaurants to sell bread and other leavened goods during the Passover holiday. 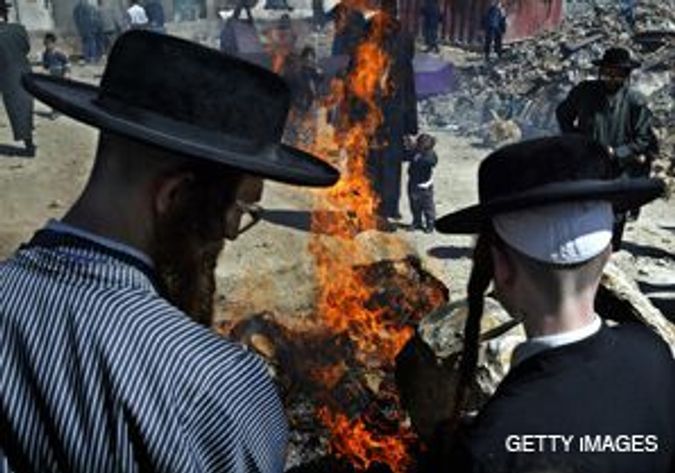 NO TRACE: Ultra Orthodox burn bread before the start of Passover at a ceremony in Jerusalem.

Jewish religious law forbids the possession during Passover of bread and similar products, known in Hebrew as hametz. In Israel, the sale of hametz in Jewish areas on Passover has been universally considered illegal since the enactment in 1986 of the Festival of Matzot Law. This law, seldom enforced, states that bakery goods may not be displayed in public during the weeklong holiday.

In a landmark ruling, however, a Jerusalem municipal judge ordered on April 3 that indictments be dismissed against four restaurant owners charged with displaying bread and leavened goods last Passover. The judge, Tamar Bar Asher-Zaban, ruled that shops and restaurants are not “public places” and therefore owners are free to do as they wish. She maintained that the law was never meant to ban the actual sale of hametz, only its display.

The judge further challenged the common understanding of the law, saying that many forms of hametz are completely exempt, which means they could be traded in truly public places such as open-air markets. “Hametz prohibitions as they are outlined in the Halacha,” or rabbinic law, are not relevant, she ruled. The Israeli law, she said, is a symbolic law that only prevents the display of goods that epitomize hametz, such as “bread, rolls and pitas.”

The reaction has been swift. On April 7, 40 Knesset members from the three religious parties, Shas, United Torah Judaism and the National Religious Party, together with the Likud, moved to introduce legislation that will nullify it.

The four parties sent the Knesset speaker a demand to recall lawmakers from their spring break for an emergency session to discuss Asher-Zaban’s judgment. They submitted proposals to replace “public” in the law with a less ambiguous term that would cover food outlets.

“At Sunday’s Cabinet meeting, we checked with ministers to see what they are prepared to do, and expect the government to give its backing,” Shas spokesman Roi Lachmanovitch told the Forward.

He predicted that government backing would be confirmed at the next Cabinet meeting, and that legislation would pass through the Knesset within days afterward, in time for Passover.

According to local media reports, Shas is promising to quit the government — in accordance with its threats to do so, for which it is renowned — unless this approval is forthcoming. If this is true, it would mean that after Prime Minister Ehud Olmert managed to keep Shas on board through months of stormy debates over talks with the Palestinian Authority, anger at negotiations on the fate of Jerusalem and constant wrangles over settlements, the religious party could leave — and the government could crumble — over bread.

Lachmanovitch said he is so confident the government will back the religious parties’ bill that he was reluctant to consider a scenario where it did not, and denied that any plans exist to leave the government.

The NRP does not share his confidence. While backing the bill, party leader Zevulun Orlev is trying another channel. He disclosed to the Forward that he has petitioned attorney general Menachem Mazuz to keep the law as it stands on the statute books but to challenge Asher-Zaban’s interpretation.

As the attempts to counteract Asher-Zaban’s ruling swing into action, the war of words goes on. Israel’s minister of religious services, Yitzhak Cohen of Shas, released a statement: “We must get rid of the court like we get rid of hametz.”

It continued: “The court must rule on what it knows, and not on halacha. The court’s ruling points a gun at the head of the Jewish people.” The Shas party leader, Eli Yishai, went even further, calling the ruling a “black stain on Israel’s Jewish identity.”

The NRP, too, “is very angry about this,” Orlev said. “Almost all of the Jewish people want to keep Jewish tradition — and not only in their homes but also in public places,” he said, citing a new poll commissioned by Aviv, a major matzo firm, as support. The poll found that 69% of Jewish Israelis will not eat hametz during Passover, though it did not canvass attitudes toward public display of hametz.

Orlev said that his party is worried about employees in supermarkets being forced to work with hametz on Passover when they are not prepared to do so.

Opponents of so-called “religious coercion” praised Asher-Zaban’s ruling and pledged a fight to uphold it. Lawmaker Avshalom Vilan of the Meretz-Yachad party said he was amused by the irony that the ruling came about during an attempted prosecution of hametz vendors. “I said to myself that somebody who tries to control these issues by law has gotten it in the face,” he said.

“It is against basic civil and human rights to not be allowed to buy something in a shop because of religious demands,” Vilan said. He added, “The demand of the ultra-Orthodox parties to change the law immediately is ridiculous.”

Vilan added, “If they go ahead with this attempt, the secular people of Israel, who are the vast majority, will start fighting against them, and use every parliamentary method we can.”

Shahar Levy, who owns Restobar, a restaurant in Jerusalem’s Rehavia neighborhood that was in the dock before Asher-Zaban, said he is “very happy” with the judge’s ruling. “However,” he added, “there is a part of this that upsets me. While it is good for us that we won, it makes me sad that it hurts relationships between the secular and the religious.”