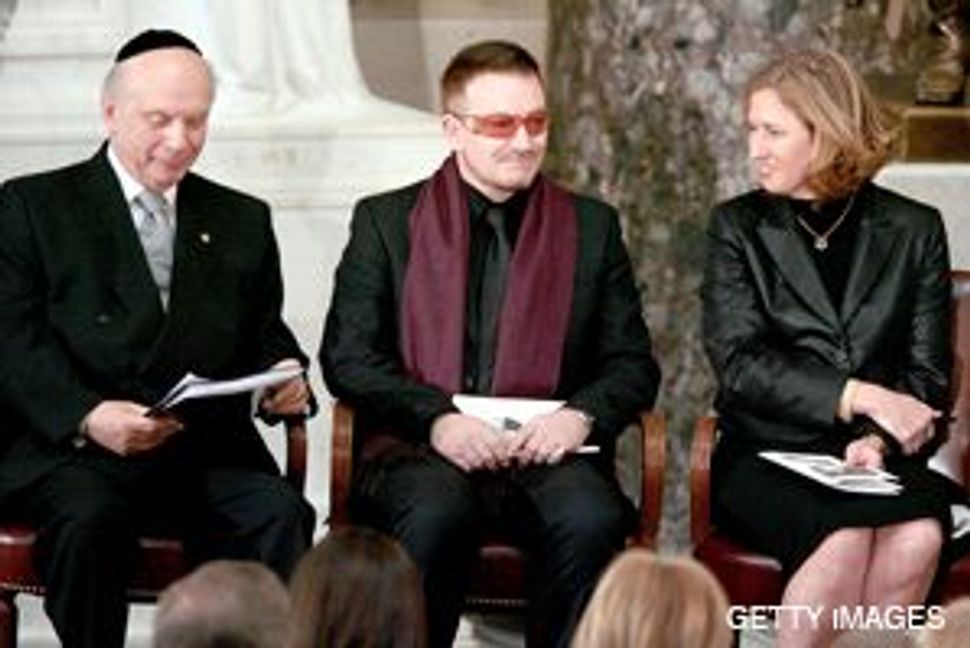 YOU KNOW SCHNEIER, TOO?: Bono and Israeli Foreign Minister Tzipi Livni with Schneier (left) at a memorial service for late congressman Tom Lantos.

When Benedict XVI pays his respects at Manhattan’s Park East Synagogue on April 18, it will be the first visit by any pope to an American synagogue. 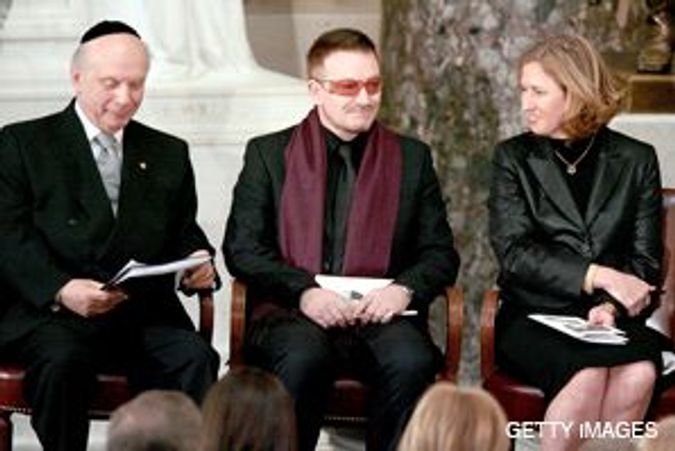 YOU KNOW SCHNEIER, TOO?: Bono and Israeli Foreign Minister Tzipi Livni with Schneier (left) at a memorial service for late congressman Tom Lantos.

It will also be a crowning achievement for the man who greets him: Rabbi Arthur Schneier.

Yet Schneier was not selected for the honor because he represents America’s organized Jewish establishment. In fact, his selection bypassed official Catholic-Jewish channels. Rather, Schneier was reportedly chosen because, while visiting the Vatican as the pope’s American itinerary was being planned, he knew where to tender his invitation.

Where Pope Benedict XVI represents the embodiment of institutional power, Schneier, to those who have followed his career, is, in a sense, the opposite — a self-made man who has attained his current level of prominence not because of institutional clout but through old-fashioned diplomacy. Over the past four-and-a-half decades, he has risen to prominence in the fields of interfaith dialogue and international affairs by combining a knack — detractors say a hunger — for publicity with carefully nurtured contacts with elite figures. In doing so, he has become one of the most prominent voices on tolerance and interreligious dialogue, while remaining a pulpit rabbi and the head of a small foundation.

“He demonstrates one person with a lot of energy can make a difference,” said Rabbi A. James Rudin, senior interreligious adviser at the American Jewish Committee. “He’s shown that one should not underestimate the one-to-one personal relationships.”

Schneier’s office on the second floor of the Rabbi Arthur Schneier Park East Day School is a testament to his success, its walls encrusted with photographs of Schneier shaking hands with the last three American presidents, the last two popes, Henry Kissinger, Kofi Annan and scores of others.

This success has been almost entirely of his making. He was born in Vienna in 1930, to a respected and well-to-do rabbinical family. (Schneier is the 17th consecutive member of his line to enter the rabbinate.) When Schneier was only 6 years old, the Nazis killed his father. Schneier and his mother were forced to flee to Hungary, where they spent the rest of the war in hiding.

Schneier came to the United States with his mother in 1947. He later told his family that for a year he would stand in front of a mirror daily, practicing his elocution until he had eliminated his continental accent. He subsequently attended college on scholarship at Yeshiva University, where he was eventually ordained as an Orthodox rabbi.

One former colleague suggested that Schneier’s ambition was driven in part by a desire to re-create the eminent position that his family had held in Europe before the Holocaust.

“I think that he was driven to create himself and where he felt that he belonged,” said Rabbi Fred Hyman, a former assistant rabbi to Schneier at Park East. “In the rabbinate, he was able to do that.”

In 1962, Schneier took the helm at Park East, then a historic synagogue with an aging, declining membership. In 1965, he established himself at the forefront of the nascent movement for the rights of Soviet Jewry. He took out a full-page ad in The New York Times and staged a demonstration at Park East, featuring Robert Kennedy.

Schneier also worked to cultivate relationships with Soviet officials, an approach that didn’t always win him friends in the movement. Jacob Birnbaum, founder of Student Struggle for Soviet Jewry, one of the early organizations to protest the treatment of Jews in the Soviet Union, recalls that he and Schneier were at odds over how to take on the Soviet government.

“He had to be against us, because he believed in the quiet diplomacy stuff and we believed in confrontation,” Birnbaum told the Forward.

But Schneier’s diplomacy also gained him political clout, which he was able to put to use. Throughout the 1970s and ’80s, Schneier used his political ties to Soviet officials to ship tons of matzo and thousands of prayer books to Jews in the Soviet Union, Communist bloc nations in Eastern Europe and Cuba.

In 1965, Schneier also founded the Appeal of Conscience Foundation, an organization dedicated to promoting human rights, religious tolerance and freedom of conscience. Run by Schneier and a small staff, the foundation dedicates itself to periodic seminars on interfaith issues, missions abroad to promote interfaith dialogue, the issuance of joint statements with other religious leaders and a lavish annual awards dinner that draws such high-wattage guests as Henry Kissinger, Paul Wolfowitz and Charlie Rose.

Those connections became a part of both Schneier’s social circles and the life of his synagogue. He has for years invited heads of state and diplomats to speak at Park East Synagogue, announcing the weekly Sabbath speaker with ads in Jewish newspapers.

With the pope’s visit, Schneier is entertaining his most prestigious guest to date.