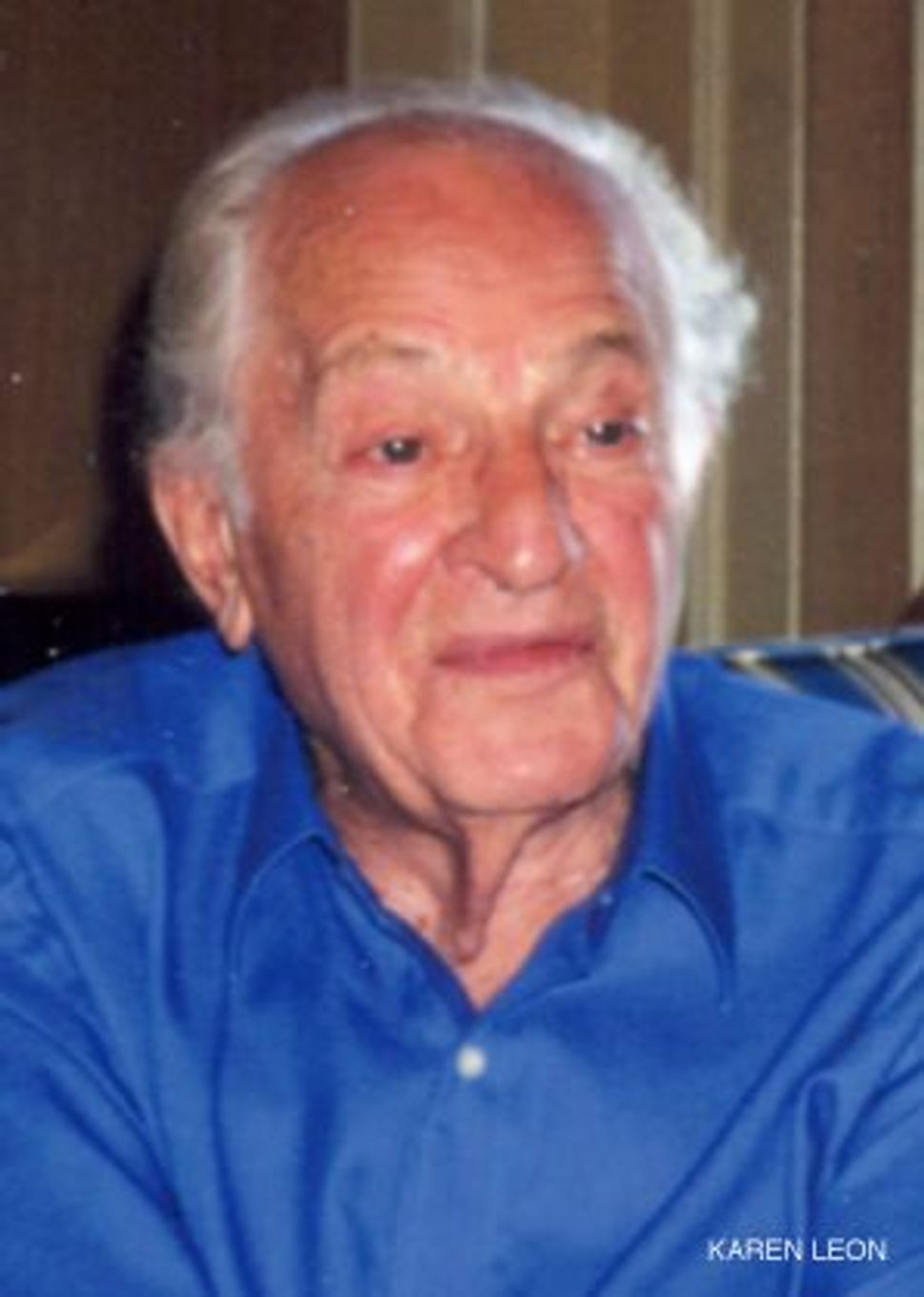 Legendary: Filmmaker Jules Dassin directed ?Rififi,? among many others. 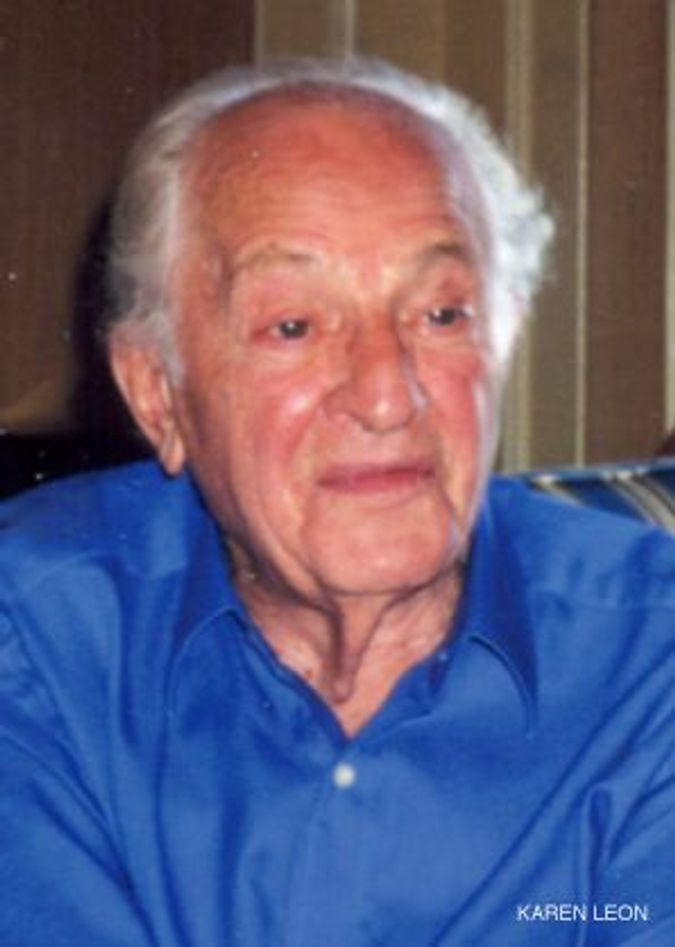 Legendary: Filmmaker Jules Dassin directed ?Rififi,? among many others.

“During my 2000 interview with filmmaker Jules Dassin, who died in Athens on March 31 at 96, he told me, “Jules Dassin was a Napoleonic soldier in Paris who, during the invasion of Russia, fell in love, impregnated a young woman, and years later walked from Paris to Moscow where he found his 12-year-old daughter.”

Dassin was in New York for the release of his 1955 French masterpiece “Rififi,” which he directed, co-wrote and starred in. Because of my Yiddish greeting and association with the Forward, Dassin told his handlers to “hold” the other press people, and so we spent a haimish afternoon at the Plaza over bagels and cream cheese, which he had ordered from room service. Lolling on a striped chaise, Dassin — in Hellenic splendor in white slacks and Aegean blue shirt, pink cheeked and agile for his then 89 years — told me, “My father came from Odessa and my mother from a town she called ‘Piston-bay Kolomey.” Bronx-raised, Dassin — whose filmography includes “Brute Force,” “The Naked City,” “Topkapi” and “Never on Sunday” (which starred his late wife, Greek actress Melina Mercouri) — began his acting career in Camp Nisht-Gedayget (Camp Without Worry) and Camp Kinderland. “Kinderland!” I exclaimed. “You mean the leftist one across the lake from [Workmen’s Circle/Arbeter Ring’s] Camp Kinder Ring!” “That’s the one,” he said, chuckling. “In the 1930s, I got $15 as the social director, and we starved there during the season.”

I asked about his stint with Artef — the Yiddish acronym for Workers’ Theater Group — founded in 1925 under the Communist daily Freiheit (Freedom). “My problem with Artef,” he said, “was that my father insisted we speak English in the house. ‘We are Americans,’ he’d say, so I heard and spoke little Yiddish. I had to learn Yiddish, and Dudl [David Opatoshu] and Lalla [Stella Adler] helped me. I made my reputation as the understudy to the star in Moyshe Kulbak’s “Boytre Gazlen” (“The Robber”). The first night I was wonderful. The next two nights were disasters. The thought of doing this every day dissuaded me from being an actor. Though the theater was always full, for four to five years we never got paid and we lived by playing poker with money we never had. When we got to Hollywood, we were all embarrassed that we’d sold our souls to Hollywood.… To save our souls, we played shocking, dissolute [poker] games.”

I mentioned to Dassin that I had recently interviewed Peter Ustinov, whom Dassin directed in “Topkapi.” Dassin nodded. “Oh, yes. Originally I cast Peter Sellers for the part. He asked who else was cast, and I told him Maximilian Schell. ‘I heard it’s impossible to work with him,’ Sellers insisted.” An agitated Dassin continued: “Now I lived for a number of years in Hollywood and saw people destroyed by bad rumors. I saw Paul Muni being bad-mouthed. So when Sellers said, ‘It’s either Schell or me,’ I cast Peter Ustinov.” Dassin, who left the United States in 1953 after being blacklisted, lit his fifth — or maybe sixth — cigarette. The interview was over. “Zay gezunt — be well,” I said in parting. Dassin waved, put down the cigarette and turned to the platter of bagels. I promised to send him a copy of my interview with David Opatoshu, his Artef colleague, whom he starred in his 1948 film “Naked City”. Coincidentally, Dassin’s Athens address was Melina Mercouri Street, named after his late wife.

“Behind every successful man there is a surprised woman,” said Roger Ailes, chairman and CEO of Fox News Channel, to the more than 500 guests at the March 11 Jewish Community Relations Council of New York’s gala at The Pierre. Before introducing JCRC honoree Lawrence Jacobs, senior executive vice president and group general counsel of the News Corporation, Ailes (himself a 2005 JCRC honoree) joshed about Irish Alzheimer’s as “an affliction where one only remembers the grudges.” Waxing serious, he said: “There is a 23% increase in antisemitic incidents in the U.S. More than ever, [we need] a strong voice for Israel, a strong force advocacy for Israel, strong hearts for Israel.” Seymour Sternberg, chairman and CEO of New York Life Insurance Company, thanked honoree Matthew Goldstein, City University of New York chancellor, for “giving our city and state university back [to us] without lowering standards, returning the university to its original mission to give immigrants opportunities… [a university] with students from 188 countries who speak 100 languages.” After touting Jeff Weisenfeld “for his help as a [CUNY] trustee, Goldstein urged the need for “a rigorous education… students will be facing a punishing future as fewer are earning advanced degrees….We are experiencing a slippage as other countries invest in education — in Europe, East Asia, Down Under” — whereas in the United States “there is an unrelenting retreat. [It’s] a national security issue.… What is at stake will be “the prosperity of our citizens and… our country.”

The gala also honored Mark Wagar, president, of Empire BlueCross BlueShield, who delighted the assemblage by positing: “What is a 6-foot-9-inch Methodist doing here?… I should be out there raising premiums, denying claims.” Touting BCBS’s investment “in your community,” Wagar declared, “For the past 75 years, BCBS has been your partner in good times and bad… JCRC’s picking health as one of its issues [is] what brought us together tonight.” The guest roster included City Council Speaker Christine Quinn; public relations maven Howard Rubenstein and his wife Amy, and a strong representation of CUNY headliners among whom were Frances Degan Horowitz, president of CUNY’s Graduate Center; Eduardo Marti, president of Queensborough Community College, and Hunter College’s president, Jennifer Rab. Also in attendance was Peter James Johnson Jr. of Leahy & Johnson, last year’s JCRC honoree. Michael Miller, JCRC’s executive vice president and CEO, declared the evening the largest to date.

‘MARRIED LIFE’ — AN INTRIGUING FILM THAT KEEPS YOU ON THE EDGE OF YOUR SEAT “Married Life,” a film by writer/director Ira Sachs set in 1949, recently opened in New York and is now distributed nationally. The movie is a romantic romp, a suspenseful melodrama, and a psychological thriller about complex relationships among the married and single. It sizzles while keeping you on the edge of your seat. When I asked Sachs if he was single or married — since he got some of the nuances of married ennui so right — he informed me that he was gay, single, had had a number of relationships that, in their own way, mirrored mainstream married tensions. Growing up in Memphis, Tenn., in an upper-class German Jewish family, where “Jewish” [Yiddish] was spoken, Sachs said he felt “separated from the place, while belonging and being outside of the culture,” and that he “felt different.”

Chris Cooper (who was superb in last year’s “Breach”) portrays Harry, a husband who plots to kill his wife, Pat (Patricia Clarkson), so that she will not be devastated when he leaves her for young, pretty Kay (Rachel McAdams), who is romanced by Harry’s friend, Richard (Pierce Brosnan). Crystal ball-gazer that I am, I could not have predicted the ending!

Maybe the reason I enjoyed the film so much was that — with its unpredictable turns and surprises — it reminded me of a true-life 1960s scenario. Two couples — members of a synagogue our family occasionally attended — lived in adjoining houses. Unbeknown to the husband of one couple and the wife of the other, their counterparts had dug a tunnel between their two houses, thus enabling the cheating couple to have liaisons that never saw the light of day until an explosive confrontation in the synagogue’s lobby. It was the talk of…