A Vine in the Sky 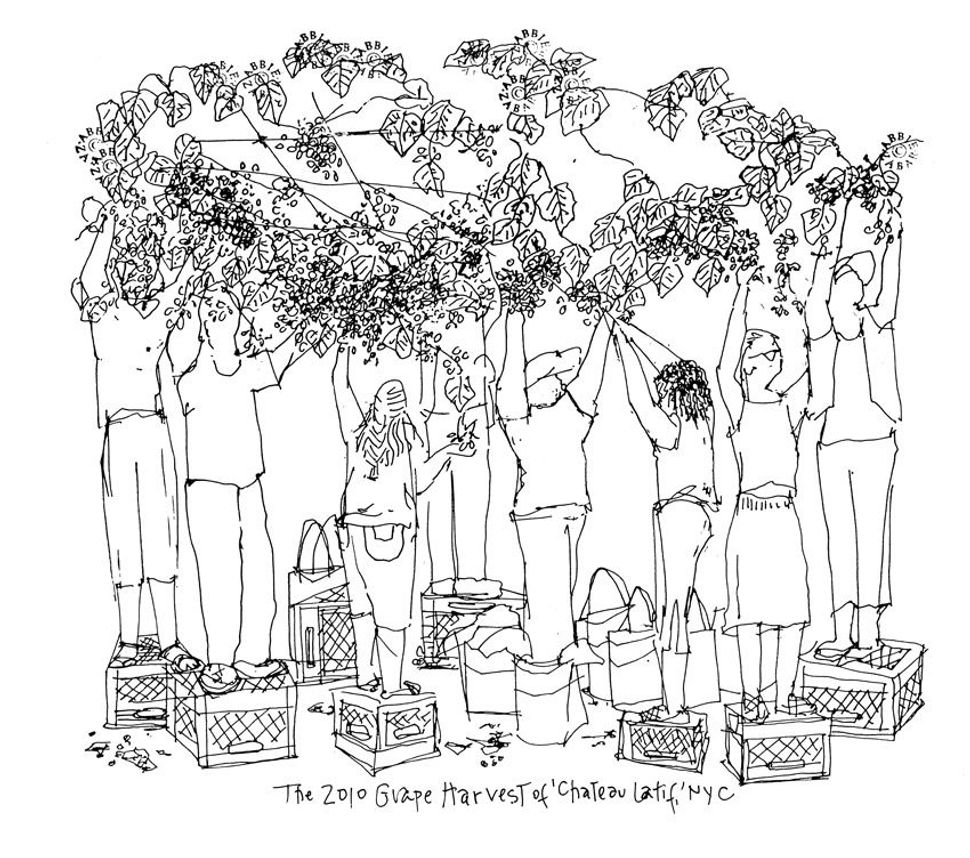 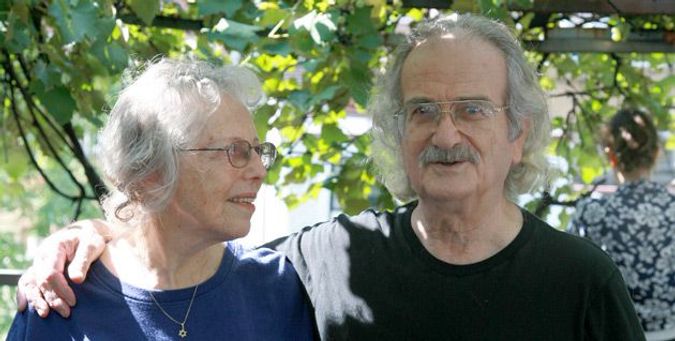 Family Affair: Vera and Latif Jiji planted the vine in 1977.

For 12 months of the year, a few steps below the sidewalk, a fig tree grows in nothing more than a polyvinyl container filled with New York City dirt. The canopy of leaves looks about 10 feet high, and every morning, on my way to swim at the 92nd Street Y, I check it out — sort of like a mother marking her child’s growth on the kitchen wall. In September, hide-and-seek fruit cozy up to leaves so large that you know why Adam and Eve wore foliage for their going-away wardrobes. 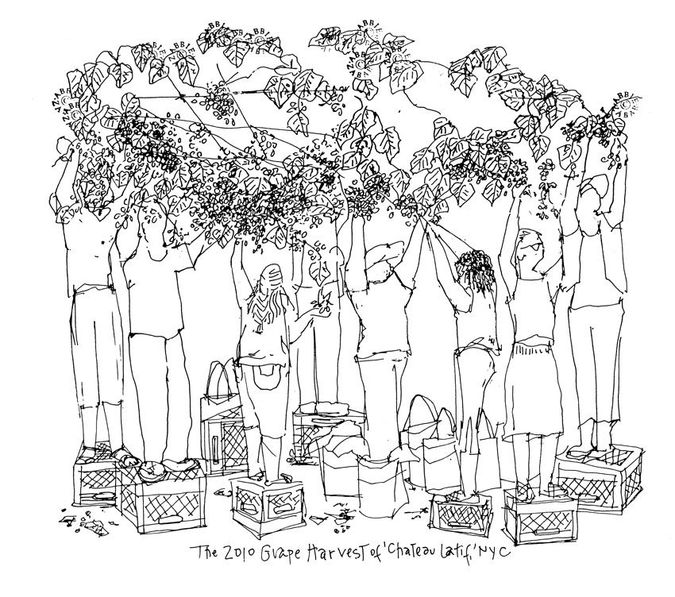 One day, I slip a handwritten message, “To Proud Owner of Gorgeous Fig Tree,” under a carved oak door at the top of the townhouse stairs. It’s a Full Corn Moon, and I’m feeling lucky. No matter that I grew up in a city where you quickly learn never to make eye contact with strangers. Or that I’m a big success with containerized olive trees. I needed tips on Ficus carica ‘Brown Turkey’ — supposedly one of the easiest figs to grow — because I’ve killed a few already, and someone here is doing better than I am. Or maybe I just want to reach over the garden gate. A few days later, Latif Jiji calls. He is happy to chat about his fig tree, but says if I really want to see something impressive, I should come over and look at his grapevine growing on the roof. I let it drop. Luckily, Latif doesn’t give up. Almost a year later he calls again, this time inviting me to the annual harvest. Along with pruning shears, I grab my drawing pen and pad and head for his place.

After the hottest three months in a row, there is a breeze on Saturday, August 28. There also is delightful shade up on the roof, under a vine that resembles a nonstop sukkah with a singularly vigorous crop, and where I’m sitting on a milk carton. Bunches of Niagara grapes, a variety of the North American species, Vitis labrusca, commonly served as table grapes or to make jams and juices, are coming down all around me; every time I look up I see more sky. I’m drawing as fast as I can.

Latif, 82, is a proud amateur vintner with an extremely generous soul. He left Iraq in 1947, when it was clear that the future of Jews in his homeland was grim. “There are others who buy grapes or juice and make wine in this city. But ‘Château Latif’ is the only winery in Manhattan that grows its own grapes and uses them to make their own wine,” he explains.

From a little nothing of a twig nonchalantly stuck in the ground, back in 1977, Latif’s grapevine has climbed five stories — “Jack and the Beanstalk” style — and is now cutting across the roof and racing to the front of the building. Certainly not how they train the world famous vines at Château Lafite Rothschild in Bordeaux. Nevertheless, the juicy pale-green baubles haven’t lost their vigor, and the ultimate count for this year will be 636 pounds of grapes, with an expected yield of 140 bottles. Tricky as it is to harvest an overhead crop, dozens of feet are firmly grounded on the ubiquitous plastic milk cartons you see abandoned around the city. The air is redolent with a musky aroma, team spirit is contagious and “Quit talking, start cutting” becomes the chant of solidarity. All ages and techniques are in evidence, but slinging a plasticized gunnysack with long straps over the shoulder seems the way to go when cropping grapes above your head and the sticky juice is dripping and the arms are aching.

At ground level, a path of thick construction paper protects beautiful wood floors leading to the backyard, where a rope pulley lowers a basket loaded with grapes gathered on the roof down the south side of the townhouse. As they’ve done since 1984, when their first crop yielded 23 pounds, Latif and his wife, Vera, a retired English professor and the author of “Cello Playing for Music Lovers,” ritualistically set out breakfast, lunch and dinner for the field hands. Which means if you aren’t picking grapes, or feeding bunches of them to a stainless-steel crusher near the cherry tree, or hosing off the wine-making equipment for next year, then you are milling around a communal table for fortification. Morning bagels, croissants and muffins, roasted eggs, lox and fruit give way to one of Latif’s aromatic specialties, T’beet, an Iraqi Jewish meal that was traditionally eaten on the Sabbath. Out come platters of spicy vegetables stuffed in dough, along with hummus and sweet-and-sour ratatouille — another recipe from his childhood; plus heirloom tomatoes brought by a new guest, from her garden in the Brooklyn Navy Yard. Desserts are Vera’s ricotta cheesecake with a granola crust and a gigantic lattice-topped fruit pie, baked and contributed by a repeat “picker.” Bottles of wine from previous vintages are flowing.

Even though he knows he is never returning to the land of his childhood, the yearning does not stop. For Latif M. Jiji, Herbert Kayser Professor, Department of Mechanical Engineering, Director, Sustainability in the Urban Environment at CCNY, and recipient of the National American Society of Engineering Educators Award for his outstanding contribution to teaching, the wine harvest is as meaningful as the Iraqi dishes he cooks for his family and the sepia photographs he’s enlarged and framed to line stairway walls.

Activity winds down, and you can hear the chorus of cicadas in the summer night. Eventually everyone leaves with a bottle of last year’s vintage, but we’re all due back at Hanukkah — around the communal table again — to decorate, draw and paint homemade wine labels for a homegrown wine: Chateau Latif, 2010.

Sometime in April and following other hocus-pocus, the juice in the five-gallon glass jugs will be completely clear. Fermentation will have converted sugar into alcohol, and the white wine will be poured into bottles, stopped up with natural corks and sealed with gold-foil heat-shrunk capsules. Each bottle is then carefully laid on its side, down in the cool wine cellar that extends under a New York City sidewalk and just below the most glorious fig tree.

Abbie Zabar is an artist, writer and designer. With occasional success, she attempts to garden in New York City. She is the author of five books, two and a half of them on gardening. Her illustrated stories have appeared in American and British publications. Her drawings are part of the permanent collection of The Jewish Museum in New York City and the Hunt Institute for Botanical Documentation.

A Vine in the Sky