How Christian Are the Tea Party’s Political Candidates? 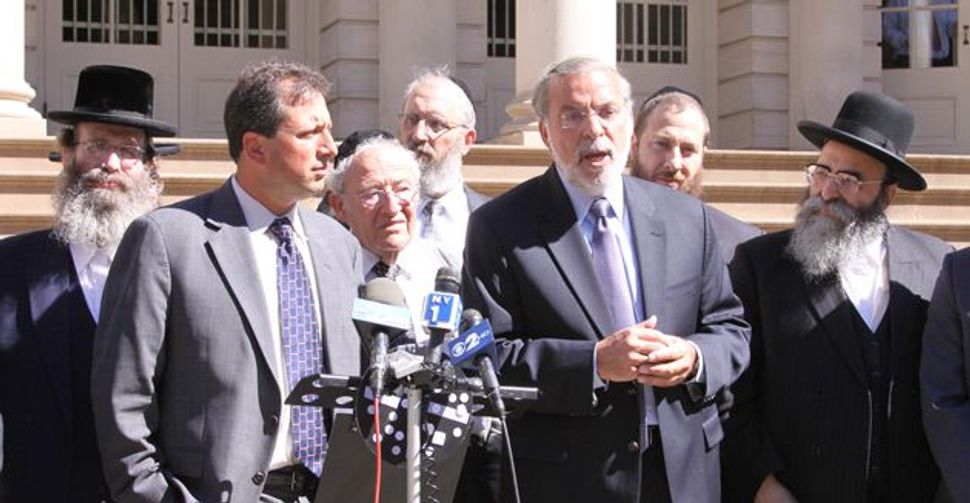 Not Drinking The Tea: Jewish leaders, including Dov Hikind (center), spoke out on September 20 against comments made by New York gubernatorial candidate Carl Paladino, who had defended another?s view that State Assembly Speaker Sheldon Silver was a ?Hitler? and an ?Antichrist.? Image by SHUlAMIT SEIDlER-FEllER

How should Jews respond to an angry movement whose candidates include full-throated supporters of Israeli West Bank settlements; others who would end foreign aid, including to Israel; one who excoriates church-state separation as a Nazi invention, and others who urge setting aside such divisive social issues to focus on fiscal conservatism and radical government cutbacks?

The success of Tea Party candidates in Republican primary races has put the Jewish community on alert.

Jewish activists are trying to look beyond the movement’s fiscal conservative agenda and make sense of the new gallery of largely unknown politicians and activists who espouse ideas ranging from social conservatism to international isolationism. Of special concern are the common use of religious themes and the frequent references to God. This could cause some discomfort for Jewish voters who are traditionally suspicious about public expressions of faith.

But just how Christian is the Tea Party movement?

Public opinion surveys confirm that the threads unifying supporters are anger and disappointment. Tea Partiers feel outraged by government spending, they strongly oppose President Obama’s health care reform and they are deeply disappointed with the people who represent them in Washington.

But the polls also reveal other lines of commonality. Though less distinct than the movement’s fiscal concerns, these commonalities clearly place Tea Party supporters on the conservative end of the political spectrum on broader social and domestic issues.

A New York Times/CBS poll conducted in April found Tea Partiers to be more Republican, more likely to own a gun and older than average voters. It also found them to be more likely to attend religious services: Fifty percent of Tea Party supporters attend services once a week or almost once a week, compared with 35% of those in the general public (and 15% among Jews, the least frequent worship attendees of all American religious groups). Among Tea Partiers, there is a higher proportion of Protestants and of those who define themselves as evangelicals or born-again Christians. Jews, according to the poll, make up only 1% of the movement’s backers, compared with their 2% share in the American public.

Researchers caution that the higher share of churchgoers among Tea Party supporters could simply be a product of their older-age profile, because religious services attendance increases with age.

Nevertheless, the fact that Tea Party supporters live a more active religious life — which is a Christian life — could explain the comfort that candidates associated with the movement feel when discussing religion, faith and God on the campaign trail.

These remarks range from libertarian Kentucky Senate candidate Rand Paul’s assertion that Christianity is “the basis of our society” and that laws would not be needed if all followed religious rules, to Nevada Senate candidate Sharron Angle’s condemnation of Social Security as a “violation of the First Commandment.”

For Jewish listeners, statements of this sort — not to mention those from Angle and Paul — could be seen as cause for concern. Though they are not part of any official or unofficial Tea Party platform, they come amid other remarks by some candidates, suggesting a lack of sensitivity on ethnic and religious issues. In one case, Carl Paladino, the Republican candidate for governor of New York, defended a local official’s description of New York State Assembly Speaker Sheldon Silver, an Orthodox Jew, as a “Hitler” and an “Antichrist.”

In defending the official, Paladino was quoted in the Niagara Gazette as saying: “If I could ever describe a person who would fit the bill of an Antichrist or a Hitler, this guy [Sheldon Silver] is it.” Paladino also was quoted as saying he was sure the local official “had no — absolutely no — intention whatsoever of insulting the Jewish faith or ethnic group or religion.”

“Every movement has a few meshugene,” said political scientist Benjamin Ginsberg, of Johns Hopkins University. “I don’t see any anti-Semitism in the Tea Party movement.”

Still, Marshall Breger, a law professor at the Catholic University of America who served as the Jewish community’s liaison during the Reagan administration, said that this kind of talk turns away most Jewish voters. “They are scared of such comments,” he said. ”These comments bring to the surface Jewish fears of mass populist movements that historically were not favorable for Jews.”

Underlying these fears is concern about the separation of religion and state. Urquhart’s statement attributing the concept to Hitler is extreme. But Angle was quoted as saying that the separation is not grounded in the Constitution. She later explained that “Thomas Jefferson has been misquoted” on the issue. Marco Rubio, the Republican Tea Party candidate running for Senate in Florida, voiced a similar thought, claiming that Jefferson never intended “to remove Christianity from government.”

“If Jews have something to worry about regarding the Tea Party, it should be in their capacity as liberals, not as Jews,” Ginsberg said. He explained that while stands on religion among Tea Party candidates and activists are sketchy and inconsistent, the group’s economic agenda is coherent and largely opposed to the broader liberal domestic agenda shared by many in the Jewish community.

The Tea Party’s opposition to government spending on entitlement programs seems to run contrary to the social justice goals of most Jewish communal organizations. “Small government and social justice are opposing ideas,” said Rabbi Steve Gutow, president of the Jewish Council for Public Affairs. “Their views on social policy appear to be different from ours,” he said, adding that it is time for the community to “be vigilant and find out what their policies are.”

Other statements made by Tea Party candidates and supporters were also a source of concern for Jewish activists. These include strong opposition to abortion rights for women, fighting against funding for stem-cell research, and harsh anti-immigration rhetoric.

On questions related to Israel, the Tea Party runs the gamut from Rand Paul’s isolationism to Sarah Palin’s support of Jewish settlements in the Israeli-occupied West Bank. While foreign policy issues are rarely raised by Tea Party candidates, some, including Paul and Alaska Senate candidate Joe Miller, have expressed support for cutting American foreign aid, an act that presumably would include the almost $3 billion provided annually to Israel.

“We want to look at the candidates as they mature, and see how they develop and shape their views on the issue of Israel,” said Jason Isaacson, director of government and international affairs at the American Jewish Committee. Isaacson stressed that currently, the Jewish community has “questions, not concerns” about the Tea Party movement.

“In terms of elections, it all turns on [whether] the Democrats are successful in branding the Tea Party people as Christian extremists,” Breger concluded. “If they succeed, Jewish voters will run away from the Tea Party as far as they can.”

How Christian Are the Tea Party’s Political Candidates?