It’s a Mall World After All 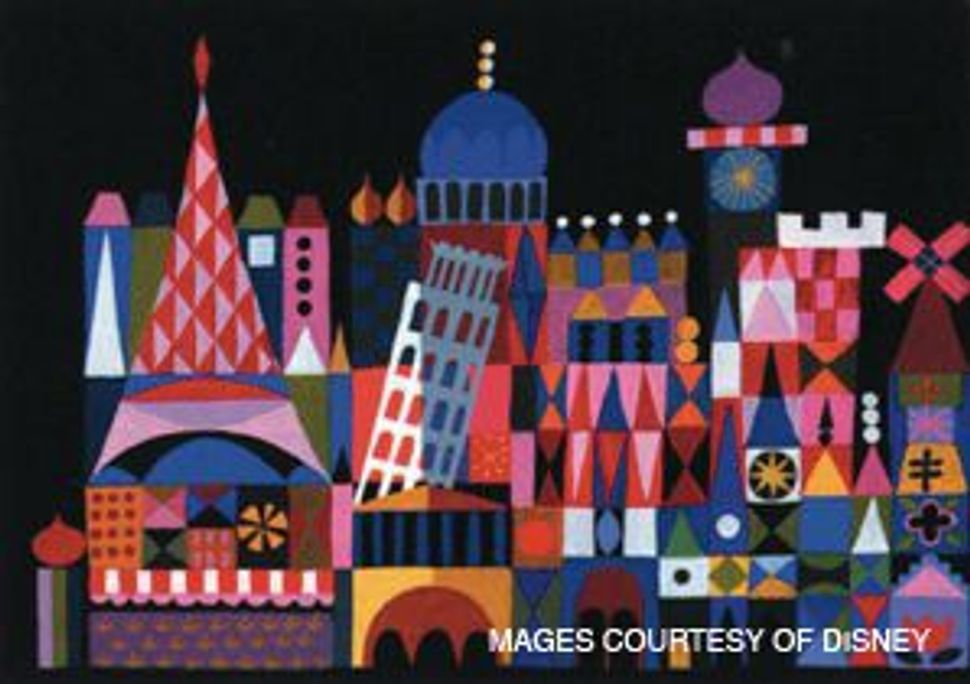 MAGICAL KINGDOM: Mary Blair?s illustrations for ?It?s A Small World? (above) and ?Alice in Wonderland?appeared in a recent exhibit at the Cartoon Art Museum in San Francisco.

I have written of my Disney evolution. I used to sneer at the company and its products. I used “Disneyfied” as shorthand for “cleaned-up, dumbed-down, soulless mass-market consumerist cheese.” 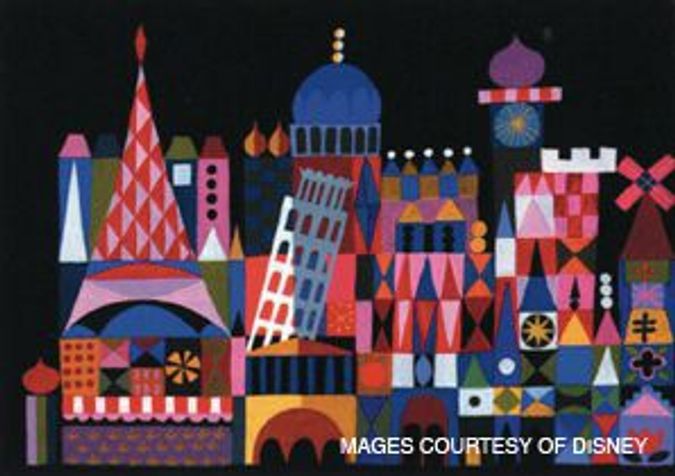 MAGICAL KINGDOM: Mary Blair?s illustrations for ?It?s A Small World? (above) and ?Alice in Wonderland?appeared in a recent exhibit at the Cartoon Art Museum in San Francisco. 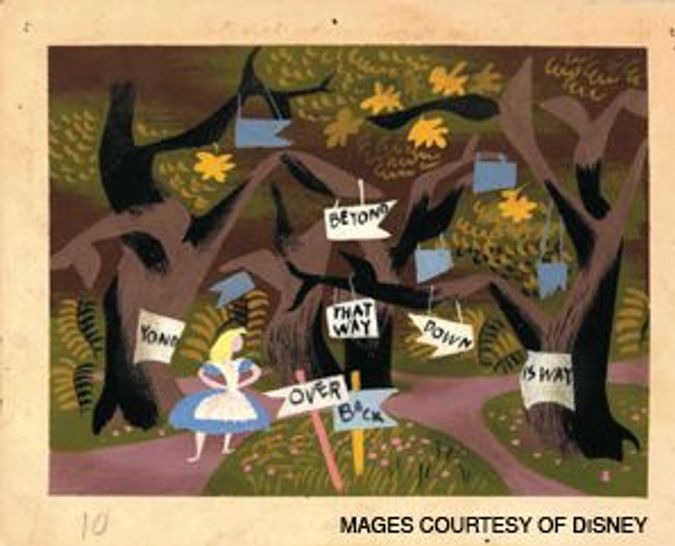 And then I had kids. Okay, I still think the movies are uneven (and sometimes sexist and racist); we prefer kid sister Pixar’s wit and complexity. And okay, the ubiquity and crappiness of plushy, costume-y, princess-y merch is irksome. But ohh, the parks. Seeing your kid overcome with joy is pretty excellent. And Disney does a great job at making kids comfortable. There are small sinks in most bathrooms! Rides are designed to let parents cope with different-aged kids: One parent can ride with an older kid, then jump off and switch places with the other parent, who’s been waiting while holding the baby, and the older kid can ride twice and the second parent needn’t wait in line again! Healthy snacks are available everywhere! You can get “fast passes” for popular rides with long lines, returning a couple of hours later without having to wait in line at all! And did I mention the fun of seeing your wee beloveds all blissed out?

And oh yes, there is Mary Blair. I discovered her work as an adult; she was an artist responsible for much of the look and feel of such movies as “Cinderella,” “Peter Pan” and “Alice in Wonderland.” She also created eye-popping mosaics and murals for Disneyland, designed fabulous non-Disney textiles (her handkerchiefs go for big bucks on eBay), and illustrated a number of children’s books. Maxine’s favorite is “The Up and Down Book” (Golden Books), in which each page is a bold, broad-lined, acid-colored delight. It was the one volume my book-indifferent baby would sit still for. Blair’s work was kinetic, poppy, trippy, folky but also clean, appealing to those who love a mid-century modern aesthetic and those who simply love cuteness. And you can see her influence on so many children’s book illustrators and animators today. I know little about her life (the one book about her, “The Art and Flair of Mary Blair,” is somewhat workmanlike); I wonder what it was like as a working woman in a male-dominated field, earning the trust of the notoriously perfectionistic and controlling Walt.

Blair is perhaps best known for her design of the “It’s A Small World” ride. It began its life at the 1964 World’s Fair, designed to reflect the values of UNICEF. Both my children were spellbound by it as tiny babies, and both still love it today. You board a boat and enter an immersive world of gorgeously designed children from many lands, spinning and waving and dancing, wearing sparklier versions of their native dress. You can argue that it’s willfully naïve, but it doesn’t read as condescending. It’s a wishful image of planetary harmony. It’s also deliciously psychedelic. Yes, the theme song makes you want to stuff stuffed Mickeys in your ears, but hey, Mary Blair didn’t write it.

There are currently four versions of the ride at four Disney parks; a fifth will open at the end of this month in Hong Kong. (The original, at Disneyland, is currently closed for renovations; the moat is being made deeper to float the boats of our porkier populace.)

But now, word is trickling from a number of Disney blogs that big changes are in store. The Re-Imagineering Blog is run by Disney and Pixar employees, who comment on design flaws and a lack of historicity in Disney’s theme parks. (“Imagineering” is Disney’s term for “designing parks and rides.” Other fun Disney jargon includes “in the magic,” which means “on property”; Disney “cast members,” aka “employees,” are urged to keep guests “in the magic” for as long as possible. “Friends with” means “costumed as”: if you’re the cast member in a Goofy suit, you refer to yourself as “friends with Goofy.” A “protein spill,” in Disney parlance, is a puddle of vomit. And “plussing” is the act of gussying up a ride by zhuzhing it, modernizing it, adding little touches.)

Disney plans on plussing “It’s a Small World” by adding a bunch of Disney characters (designed to look Blair-esque) to it. Images of the Hong Kong ride (opening on April 28) indicate that the additions may include Alice in Wonderland in the London scene; Mulan in China; an Aristocats cat in Paris; Aladdin and Jasmine in the Middle East; Ariel, the Little Mermaid, in Polynesia. Rumors are also swirling that the penultimate New Guinea rain forest scene will be severely cut back and that a “Hooray for the USA!” scene will be added.

You can’t make this stuff up. They’re gonna chop down the rainforest to add a jingoistic big-finger-pointing, grunting “USA! USA!” scene? Haven’t we done this enough in real life? The ride was designed without a USA scene for a reason; we’re the host country. The ride encouraged kids to welcome others, learn about others, appreciate the culture of others. Now the point of the ride will become a treasure hunt for hidden, familiar American-designed cartoon characters. And fuggedabout the rainforest, let’s talk about our nationalistic awesomeness!

Mary Blair died in 1978; her survivors have released an open letter to the Walt Disney Company protesting these changes. “They should leave the ride the way it was, with the children of the world, and leave all the Disney characters out,” wrote Kevin Blair, the designer’s son. “It just bastardizes the whole ride. Furthermore, ripping out a rainforest… and replacing it with misplaced patriotism is a public relations blunder so big you could run a Monorail through it.” Walt Disney Imagineering Executive Vice President Marty Sklar released his own open letter in response, saying that the rainforest won’t be removed (he didn’t answer the rumor that it will be cut way back) and insisting that adding Disney characters is a good idea, one “more relevant to our guests.”

Numerous well-known animators — from “Ratatouille,” “Monsters, Inc.,” and “The Incredibles” — have spoken out against the changes. A new online campaign urges fans to “Save the Rainforest. Save the Small World.” The site (www.savethesmallworld.com) provides contact information for Disney execs so fans can urge them to back away from the Blair.

Change happens. It’s in my own stomping grounds, not just in Mr. Disney’s neighborhood. I just passed a former shul on the Lower East Side, with Hebrew letters and a Star of David still visible in its stone façade; it now houses a restaurant called Chickie Pig’s. A pig-shaped sign hangs below the carved Yiddish words. The former CBGB’s is now a John Varvatos store, selling designer white cotton T-shirts for $198 each. The vile, putrid CB’s bathrooms with their multiple layers of grafitti and effluvia are gone; now there’s a chandelier the size of my first apartment. I’m glad I live in a neighborhood that’s safe for my kids, but I want it to have a soul and a sense of history, too.

One blogger mourned, “It’s a mall world after all.” I hope he’s wrong.

It’s a Mall World After All