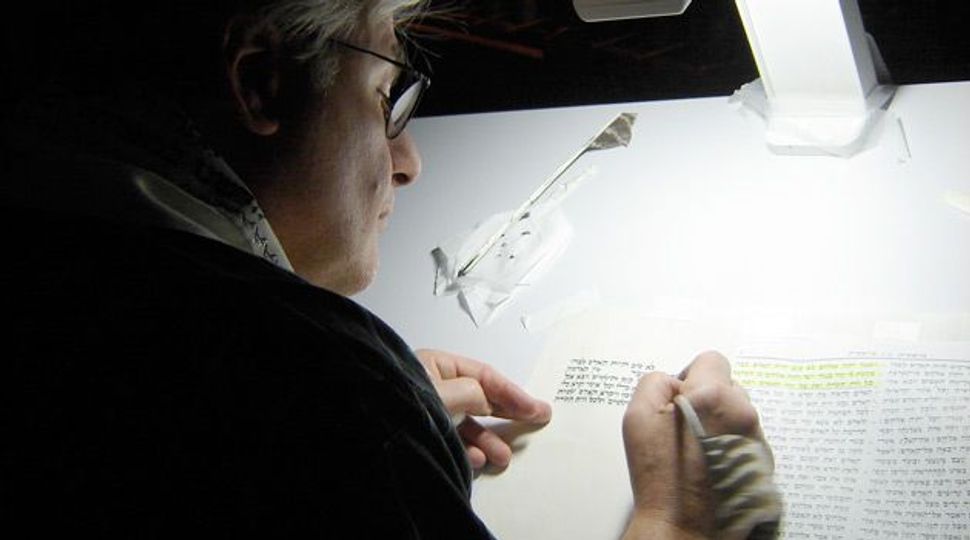 Wordsmith: Neil Yerman, 62, has trained some of the only female Torah scribes. Image by COURTESY OF GILA LYONS

“There was a Czech scroll I worked on that was 100 years old,” Yerman said. “The writing was angular, but very meditative and prayerful. I felt like I’d met the scribe. Then, years later, I came across a scroll about 135 years old. I knew right away that it was [by] the same scribe earlier in his life. The writing was gorgeous. The kavanah [intention] was so incredible. When I saw it, I felt like I was embracing my friend.”

Sixty-two-year-old Yerman has been a sofer — a scribe — for more than 25 years, and he has written six Torah scrolls. That amounts to 304,805 letters per Torah, or 1,828,830 letters in all, meticulously penned with a quill from a turkey or a goose.

Yerman is one of the few scribes who accepts female students. He has assisted in training some of the only female scribes in their art, and uniquely straddles the line between dedication to an ancient profession and living a highly modernized lifestyle in Manhattan’s Upper East Side.

Letters and calligraphy have captivated him since he was in grade school, Yerman said as he stood in his studio in New York’s Westchester County. Surrounding him were shelves of onionskin and alcohol, silica gel and gum arabic in small glass jars. Beside him were drawers labeled “sharp things,” “brushes,” “gloves,” “feathers” and “pumice.”

“I was obsessed with penmanship as a kid,” Yerman said. “I had control over the letters. They seemed to want to speak.”

Having written hundreds of thousands of letters since then, Yerman continues to be inspired by the Hebrew alphabet. He finds grace in the head of the long-necked lamed, and playfulness in the dangling tail of a final tzadi.

“Aleph,” he said with a smile. “I think aleph is my favorite in terms of its originality of spirit.”

Jewish law instructs that a Torah be written by a sofer, a scribe trained in the art of calligraphy. It usually takes about a year to write a Torah scroll, proofread it in its entirety, sew together the sections of parchment and sew the parchment onto eitzim, or wooden spindles that hold it. A typical wage for this is about $50,000, which as an annual income in New York City is not enough, Yerman says. To supplement, he visits congregations around the country to make sure their scrolls are kosher and to repair them if they are posl, unfit for ritual use due to damage or aging. He also serves as a scholar-in-residence at several of the synagogues, teaching about the physical and spiritual aspects of Torah.

On a recent afternoon at Temple Israel Reform Congregation of Staten Island, as the congregation’s rabbi and board members looked on, Yerman lifted a Torah scroll from the ark and laid it on a sunlit table in the synagogue’s social hall. After removing the breastplate, cloth mantle and velvet belt, he turned the wooden handles, partially unscrolling the Torah and releasing flecks of dust and a musty odor into the air.

One of the board members sighed. “We had a leak in the ark last summer,” she said.

Yerman ran his fingers over buckled and puffed parchment. “And I see it here,” he responded.

Yerman noted three intensities of ink throughout the text, indicating that the scroll lived through at least three periods of restoration, likely three generations. He estimated that the Torah was about 90 years old.

“Ninety?” the board members asked.

As Yerman studied the Torah, he noted blotches of transparent parchment, which indicated fatty deposits in the skin. He marked down how wide the margins were at the top and bottom of the scroll, noted which of the roughly 15 classical styles of script the scribe had used, counted the lines per column and the columns per section of the parchment, and then checked the quality of the letters. For a Torah to be ritually kosher, all letters must be distinct from one another, surrounded on all sides by white and written in opaque ink.

Yerman then pointed to a flaw in some of the letters inscribed in the Torah: white spots, like pinpoints of light, that shone through some letters indicating that ink had flaked off. To demonstrate how he would fix them, he sharpened the end of a turkey quill to the width of the top lines of the letters and unscrewed the cap to a small bottle of ink made from an ancient recipe of gum arabic, copper sulfate crystals and a gallnut made by a gall wasp. He diluted it with a few drops of alcohol, and filled in the letters on two lines. Within minutes, Yerman’s additions were indistinguishable from the blackness of the rest of the letters.

“Every scribe wants to create a perfect scroll,” he observed. “When we restore a Torah, we’re joining the scribe in this intention.”

The very last commandment in the Torah dictates that each Jew write a Torah, a commandment that can be fulfilled by writing a single letter in a scroll. In congregations throughout the country, some 50,000 Jews have held the quill above Yerman’s hand for him to write their letter. Yerman has written letters with 2-year-olds, with Holocaust survivors and with the terminally ill. In each case, he feels a gravity of purpose.

Gila Lyons is a writer living in New York City and the Berkshires. Her work has appeared in publications including The New York Press, Tablet, The Faster Times and The Berkshire Review.