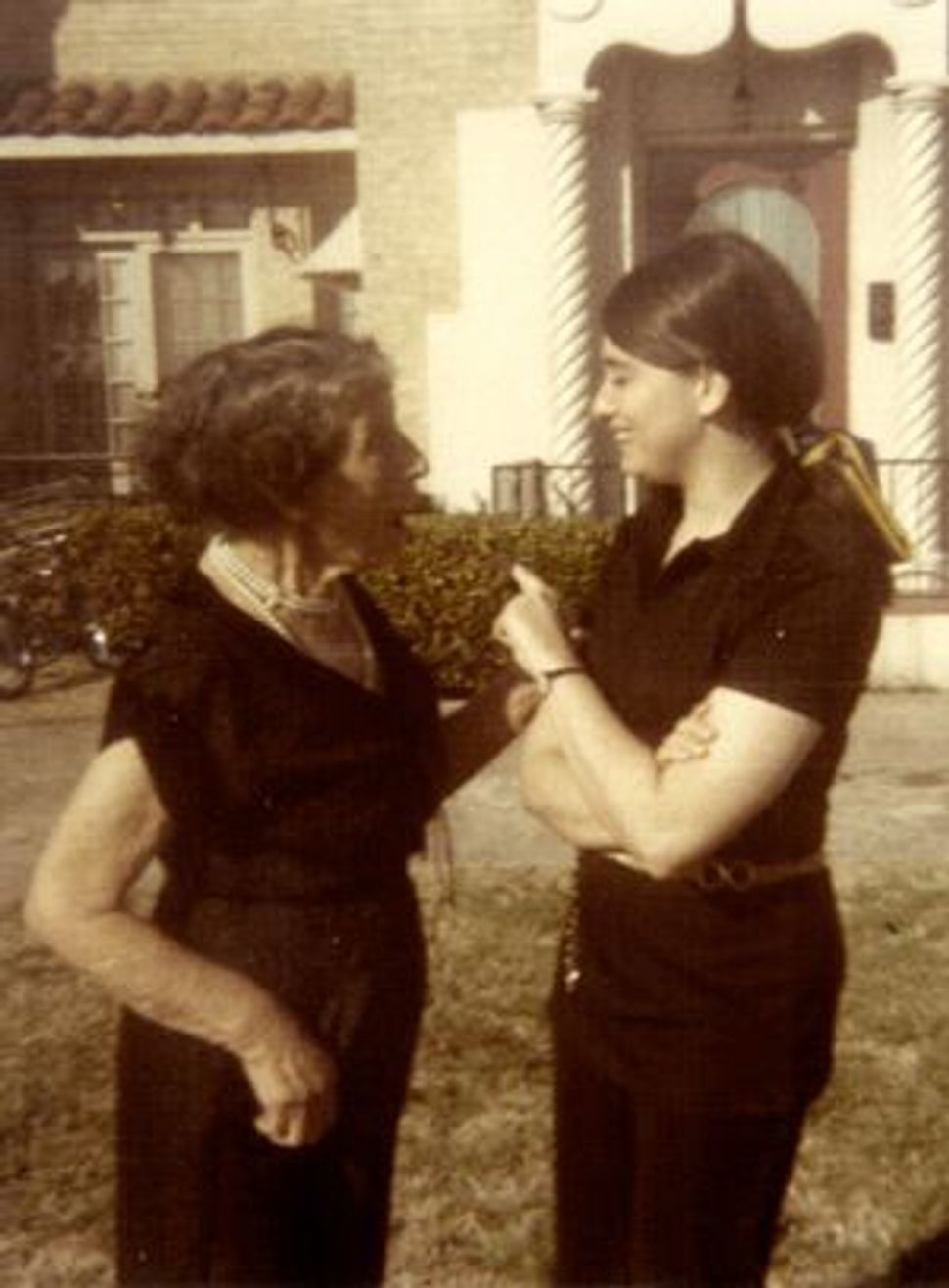 Budding Activist: As a teenager growing up in Texas (C. 1970) with maternal grandmother, Rose Hendler. Image by COURTESY OF GLORIA FELdT

All kids fear that they’re different, but I really was. 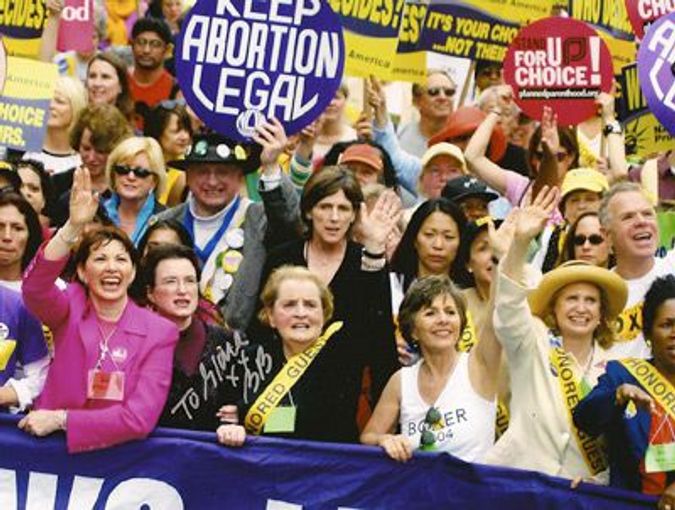 Fight for Rights: Feldt (in pink) stood front and center with other activists at the 2004 March for Women?s Lives demonstration in Washington to fight for women?s reproductive rights. Image by COURTESY OF GLORIA FELdT

I was born in Temple. Temple, Texas, that is, in the buckle of the Bible Belt, where there was only a handful of Jewish families in 1942 and no synagogue. I’ve always thought Kinky Friedman should write a country and western song called “There Was No Temple in Temple.”

My grandparents came to America in a wave of Eastern European Jewish immigration, dubbed the “poor cousins.” As part of the so-called “Galveston Plan,” established New York German Jews sent the immigrants on to Galveston, Texas, so that the newcomers wouldn’t ruin their carefully assimilated neighborhoods.

I often speculate what life must have been like for my maternal grandmother, Rose Hendler. Married the day she arrived in Texas, in 1920, she was taken to a small farming community, where her new husband — a man she hadn’t seen in seven years — owned, of course, a dry-goods store. It would have been a scandal for a single woman traveling alone not to have been immediately legitimized by marriage.

Grandmother had been a schoolmistress in Russia. She was well educated (against her family’s will, she loved to tell me), but to me, she was a doting grandmother by then widowed, my daily caregiver and most significant role model. 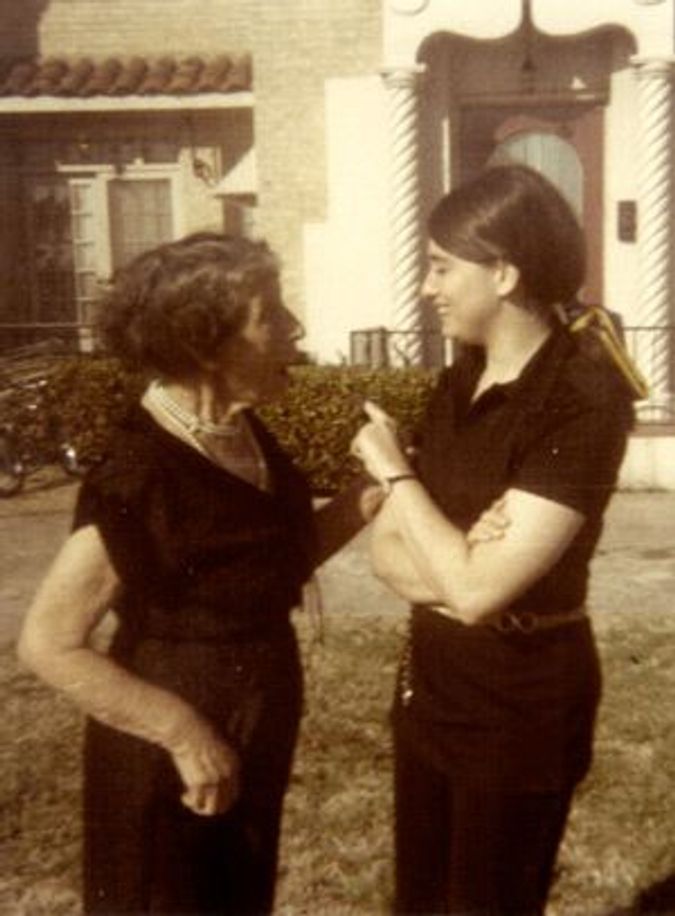 Budding Activist: As a teenager growing up in Texas (C. 1970) with maternal grandmother, Rose Hendler. Image by COURTESY OF GLORIA FELdT

By the time her daughter — my mother, Florence — married my father, Max Feldt, the family lived in the auspiciously named Temple. Mother and Grandmother did belong to a tiny chapter of the National Council of Jewish Women. I played under the table at many of their meetings; for years I associated organized Judaism with ladies’ luncheons.

Though we were members of the Reform synagogue in Waco, 35 miles away, and I sporadically attended religious school on Sundays, I would be an adult before I knew that the Jewish Sabbath was on Saturday, so nonobservant was my family and so eager to blend in. Still, I always felt different. And I had tangible evidence.

My grandparents had accents (as if a Texas drawl isn’t an accent, but never mind). My mother worked in my father’s Western-wear manufacturing business, whereas all my friends’ moms stayed home.

My first overt encounter with anti-Semitism came at Kickapoo Kamp the summer I was 11. A cabin mate’s clothes mildewed in her laundry bag, and another camper told me this was “because Susan is Jewish.” Stunned, I protested that I was Jewish, too, and my dirty laundry has impeccable credentials.

My father was a larger-than-life guy who never looked totally convincing wearing his Tem-Tex Snaperoo Western shirts. When we moved, in 1955, to Stamford, an even smaller cotton-farming town in West Texas, distinguished for hosting the world’s largest amateur rodeo, we were the only Jewish family. I was like a brunette, Jewish Cybill Shepherd in “The Last Picture Show.”

Feeling different makes people vulnerable. Conformity to a perceived norm seems like a rational defense. Vulnerability drains the courage from you. Adolescent girls are especially susceptible to cultural pressures that overtake their strong, smart prepubescent selves. They often attempt to fit into the very systems of oppression that have held back women for millennia. I certainly did.

My teenage rebellion was to become ever so “normal”: wife, homemaker and mom. (I married my high school sweetheart and we had three children by the time I was 20.)

But eventually, the smart girl I’d hidden away re-emerged, powered by increased maturity and by the Pill, which put me in charge of my reproductive life. I started college, and participated in community service work.

Those were the heady days of the civil rights movement, and as I began standing up for the rights of African Americans, my own self-esteem, courage and sense of power to shape my future blossomed. Then one day, I realized women have civil rights, too. Standing up for other women’s rights in turn gave me the strength to stand up for myself in personal relationships.

I discovered there’s an upside to being different and feeling vulnerable. Unlike the worlds of my friends who really were “normal,” or at least statistically closer to the norm than I was, I could appreciate and live in multiple cultures proficiently, if not always comfortably. Perhaps the reason we see so many Jewish women in the leadership of social movements, especially progressive ones, is that many of us have walked this path.

The experience of being different taught me empathy. It sharpened my ability to detect injustice. It eventually made me a social justice activist — after I realized there was nothing wrong with me for being who I was, but there was a whole lot wrong with people who judged others, and me, for characteristics that had nothing to do with our respective characters.

Advancing women’s rights and reproductive self-determination became my life’s work — and is what inspired me to write “No Excuses: 9 Ways Women Can Change How We Think About Power” (Seal Press). I want to make sure that all women can develop a strong sense of self, so that they can stand in their power and walk with intention throughout their lives.

The very differences that I’d earlier shunned as weaknesses, I came to realize were my greatest strengths. I was free to appreciate my heritage and to embrace it in practice as well as in philosophy. Though there was no temple in Temple, there is always a temple in our hearts and souls, and in our power to seek tikkun olam in this world.

Gloria Feldt is the author of “No Excuses: 9 Ways Women Can Change How We Think About Power” (Seal Press).