Keeping the Flame Alive in Brooklyn 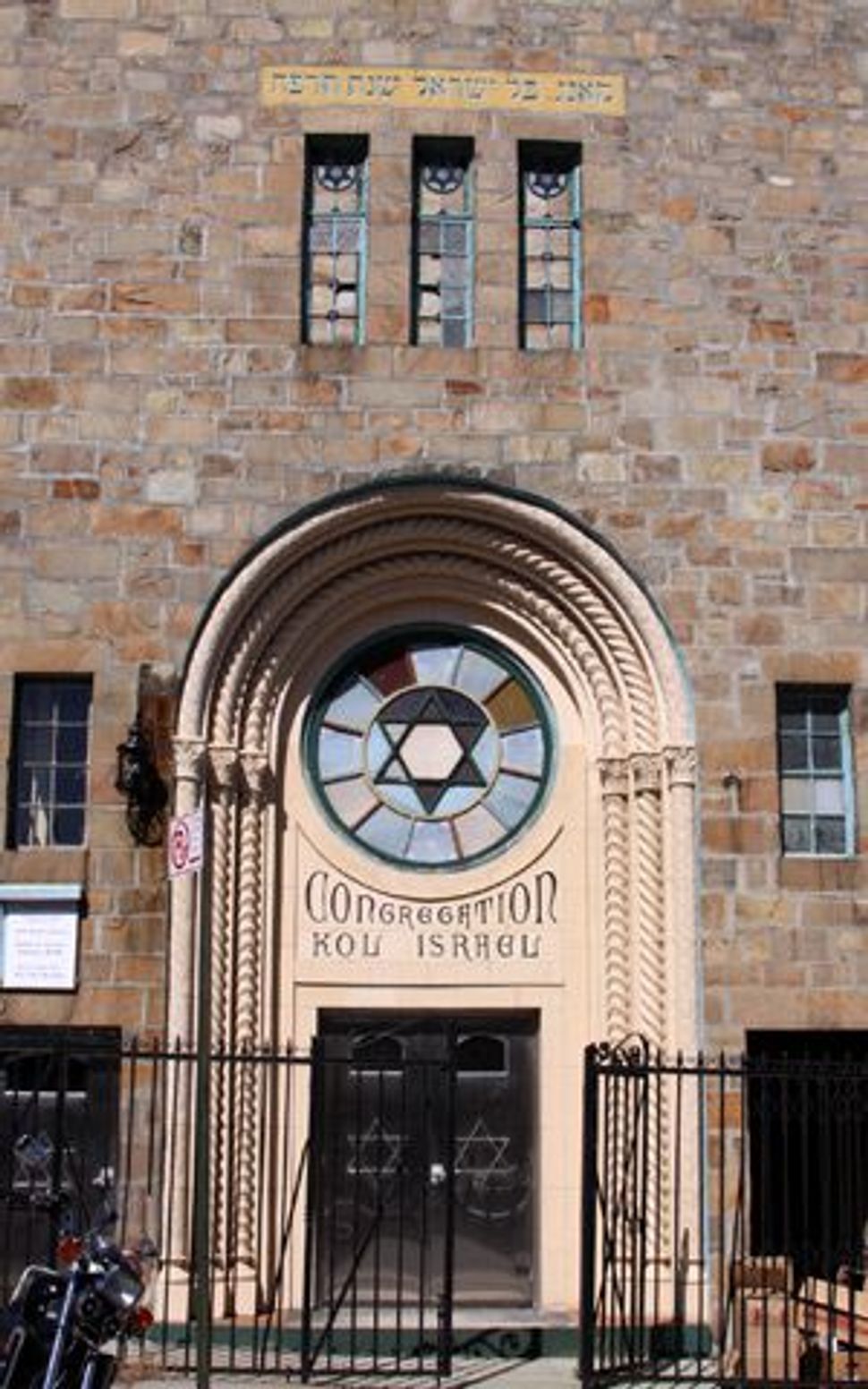 Every Saturday morning, around 8:45, Rabbi Elkanah Schwartz leaves his house in the Hasidic Brooklyn neighborhood of Boro Park for what has become a three-hour trek to shul. Almost 6 feet tall and broad-shouldered, with gray wisps of hair poking out from under his black hat, Schwartz heads north, past Hasidic homes, synagogues and yeshivas, until the Hebrew lettering gives way to the South Asian mosques and Bengali groceries of Kensington. 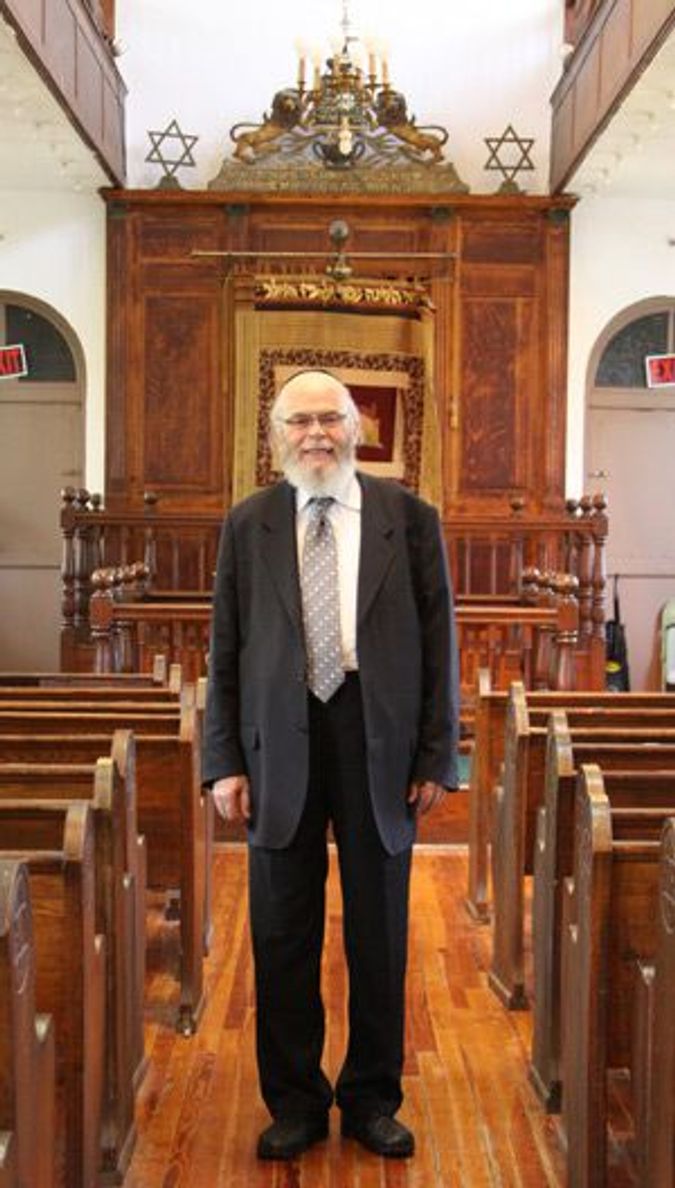 Kol Israel: Rabbi Elkanah Schwartz has been tending to the synagogue, located in the gentrifying Brooklyn neighborhood of Prospect Heights and built in 1927. Image by SHuLAMIT SEIDLER-FELLER

Schwartz is 73, and for more than 20 years he has been making the eight-mile round trip on foot. He walks slowly and with a slight limp, every once in a while standing still to rest his feet as New York’s multiethnic mix rushes by. His destination is Congregation Kol Israel, the only Orthodox synagogue in a predominantly black area.

By the time Schwartz appears at Kol Israel’s door, the service is under way. He shuffles down the center of the sanctuary, greeting the dozen or so men scattered among the dark wooden pews. Then he lowers himself slowly into a seat beside the bimah, where Rabbi Ari Kirschenbaum is leading prayers.

When Congregation Kol Israel was founded in 1924, on the ever-shifting border between Prospect Heights and Crown Heights, it was at the center of a vibrant Jewish community. There was a synagogue or a little room, known as a shtiebel, on almost every street. Most have disappeared or have been converted for other uses. The nearby Orthodox Temple Isaac is today a Baptist church. Opposite the former Temple Isaac, the once-imposing Jewish Hospital of Brooklyn is now an apartment block.

Kol Israel’s fortunes also have waned. The synagogue comfortably seats about 400 people. Yet, each Saturday morning, Schwartz ends his walk never certain whether he will be greeted by a minyan. Countless times over the decades, he has locked the synagogue’s front door wondering whether it would be for the last time.

But as Prospect Heights has experienced something of a renaissance, with an influx of gentrifiers and a profusion of new buildings, stores and restaurants, so, too, has Kol Israel begun to see signs of growth after a long, near-fatal period of decay. 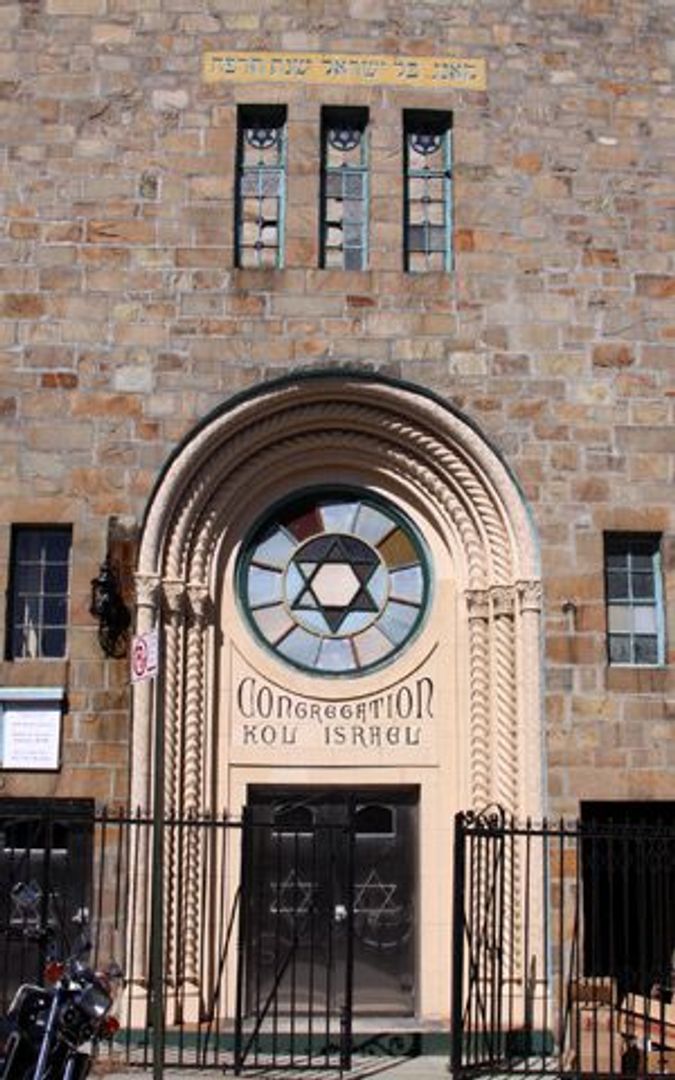 Kol Israel is a light-filled, airy synagogue, built in 1927. It has a long, narrow sanctuary with white walls and a long line of windows, smothered with leafy, green vines that almost cover an exterior wall. Above the sanctuary is a women’s gallery, and above that are two rows of skylights that run the length of the ceiling, decorated with stained glass in simple geometric shapes of turquoise, red, yellow and green.

As the time to read from the Torah approaches, Schwartz ascends the bimah and turns to face the wooden Aron Kodesh, the Holy Ark. The founders of Kol Israel purchased this land, next to the Franklin Shuttle railway line, for the bargain price of $10. Trains rattle past every five or 10 minutes, drowning Schwartz’s faint voice in the din.

But the train is not the only disturbance these days. With the influx of young families has come the sound of children, shrieking and stomping their feet as they run up and down the sanctuary or tug on the rabbi’s arm as he reads from the scrolls. When Schwartz turns to face the congregation to deliver his sermon, he focuses on the children. “Who would have thought a few years ago that the sound of children would echo through this synagogue?” he asks.

Kirschenbaum is one reason for the children. The Lubavitch shaliach, or emissary, to Prospect Heights and Fort Greene, Kirschenbaum, 32, is a father of four. But there are others, too, youngsters whose parents were lured to Prospect Heights by the relatively cheap home prices and rents. There are young couples, too. Schwartz says he can rely on about 16 regular male synagogue goers now, a handful of them new to the congregation.

Kirschenbaum leads Friday night services at Kol Israel. But he also steps in on Saturday mornings if Schwartz is running late or unable to attend. He describes Schwartz as “a bridge” between the old Kol Israel and the new. Before a recent service, he pointed to the evidence of rebirth: a soon-to-be opened classroom for religious study, and a former cloakroom that has been converted into a children’s playroom.

After the service, Schwartz bids farewell to the congregation and sets off toward home, chatting amiably about his two grown children, a son and a daughter. Recounted with a hint of irony, his daughter’s shidduch, or arranged marriage, sounds like an espionage tale, with discreet meetings at the back of synagogues and stakeouts in shul parking lots. At the entrance to the Brooklyn Botanic Garden, Schwartz greets the guards, many of whom know him by sight. Then he continues his story, every now and again stopping to rest, his hand perched on the shoulder of his interlocutor.

Schwartz’s stories take a long, circuitous route. A remark about a Yiddish newspaper includes a half-hour digression, incorporating a brief history of the Hasidic movement, reminiscences about the summers that Schwartz spent with his family just outside New York City, a discourse on the other people who vacationed there, a comment about the development of homes in that area and, finally, just when it appears as though he has become lost in his own thoughts, Schwartz arrives back to his point: namely, that not as many people read newspapers as did in the past.

Soon after entering Prospect Park, Schwartz pauses to rest his feet. He is standing in the middle of a bike lane, and in less than a minute a Lycra-clad cyclist suggests, with a few friendly hand gestures, that it would be better if the rabbi moved on. He continues on his way, marveling that he has not yet had to sit down.

At the southern tip of the park, he pauses to rest in a small, columned pavilion that has often provided shelter on rainy days. Stretching his legs, he recounts how he became involved with Kol Israel during the 1960s when he was invited to lead a Friday night home study group. At the time, Schwartz lived nearby, in Crown Heights.

By 1976, so many congregants had died or moved away that Kol Israel was down to about 20 families. When its rabbi left, the synagogue’s president, Arthur Fried, a partner at the former Lehman Brothers, asked Schwartz if he would accept the post in return for a modest stipend.

During the years that followed, the congregation dwindled further. Fried moved to Israel but continued, along with other benefactors, to finance the synagogue. In 1993, Schwartz moved to Boro Park. But he continued to lead Kol Israel.

The journey to synagogue used to take about 90 minutes, but because of Schwartz’s age and a series of medical problems, it can now take almost three hours. Some mornings, he turns up late for prayers with his flock. Other days, he has to miss services altogether. But the congregation understands. If it were not for Schwartz, there might not be a synagogue at all.

Keeping the Flame Alive in Brooklyn