It’s Not Easy To Build a Mosque in Brooklyn, Either 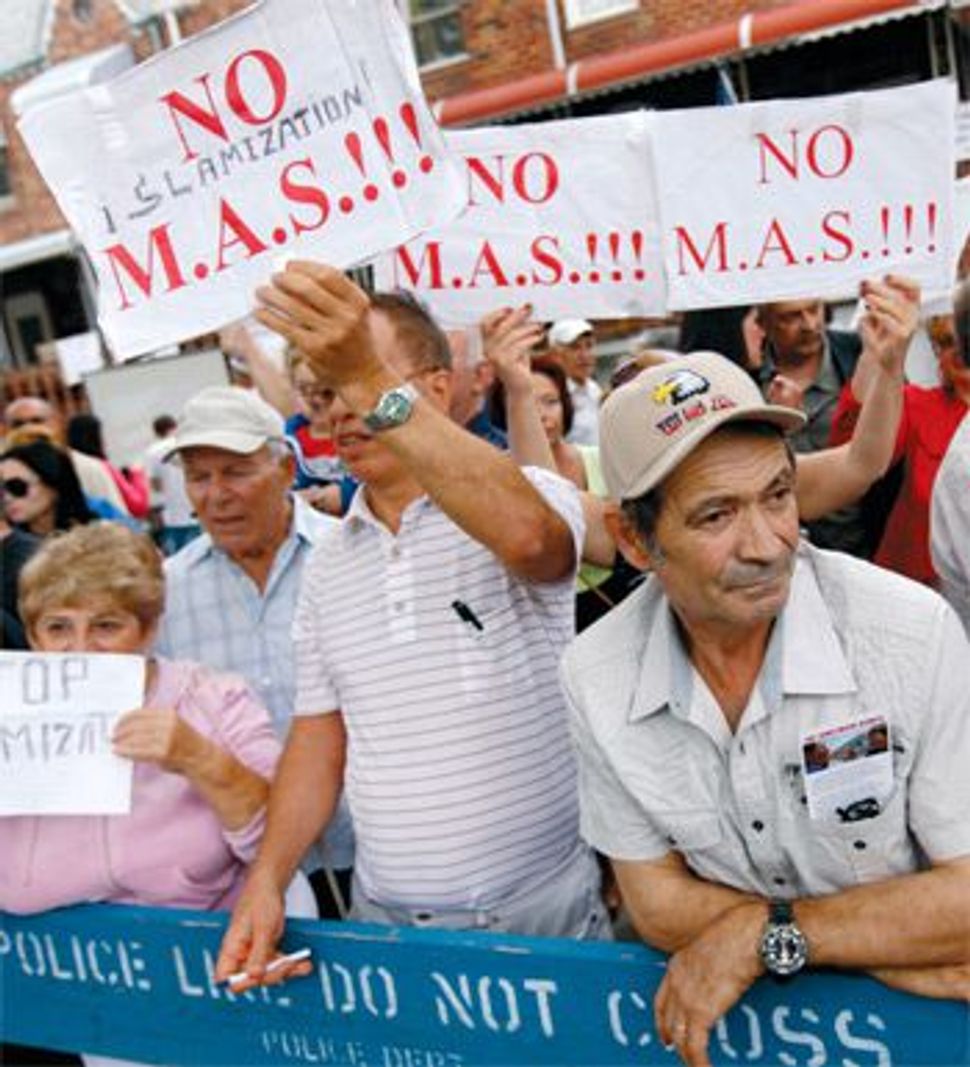 Protest: Opponents rally September 26 against a proposed mosque in Brooklyn?s Sheepshead Bay. Their signs refer to the Muslim American Society, which is sponsoring the project. Image by CLAUDIO PAPAPIETRO

Depending on whom you ask, the new mosque planned for a quiet block in southern Brooklyn is either the latest target in a wave of coordinated anti-Muslim sentiment, part of an insidious effort to spread political Islam throughout America or simply a parking nightmare waiting to happen. 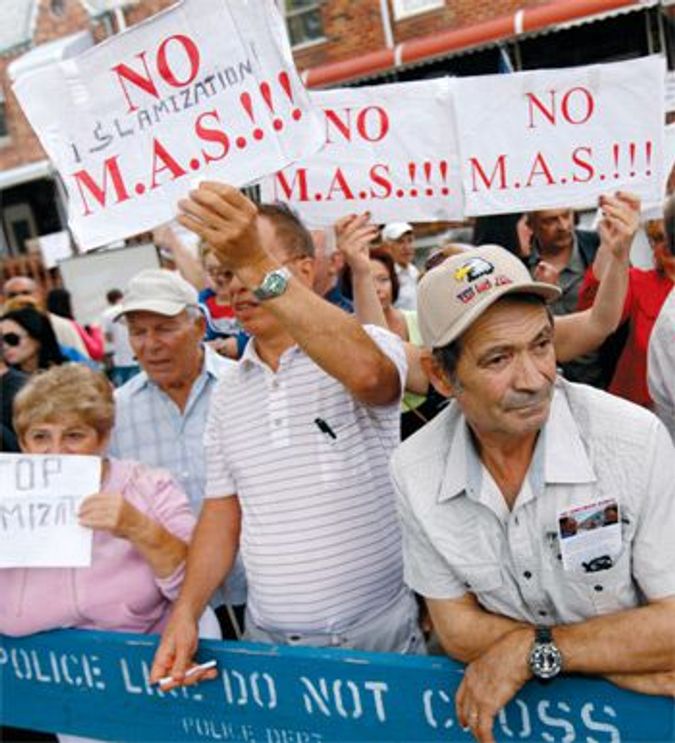 Protest: Opponents rally September 26 against a proposed mosque in Brooklyn?s Sheepshead Bay. Their signs refer to the Muslim American Society, which is sponsoring the project. Image by CLAUDIO PAPAPIETRO

On Sunday morning, September 26, partisans of each of these positions could be found in dueling protests that convened near the empty double lot on Voorhies Avenue in Sheepshead Bay, where the mosque and community center would be built.

The rallies for and against the mosque marked an emotional peak in a long-simmering dispute that began getting serious attention in July, when the controversy over the proposed Islamic cultural center near Ground Zero dominated the nation’s headlines. But the dispute began percolating months earlier. And in many ways, this lower-profile drama, taking place far from the bright lights of Manhattan, offered a more representative picture of the ways in which practical neighborhood concerns, generic xenophobia and the particular fears generated by the existence of a radical Islamic strain in the world can form a complicated web that is hard to unravel.

Local opponents of the mosque claim to be concerned only about traffic issues. But their group’s own website goes considerably further. “The neighborhood residents are mostly of Italian/Russian/Jewish/Irish decent (sic) and will not benefit from having a mosque and a Muslim community center,” reads the website, baypeople.org.

At the site of the dueling rallies, many participants in the anti-mosque gathering said they opposed Islam in general. But others charged that some of the most vociferous speakers came from outside the neighborhood, with their own agenda.

Meanwhile, supporters of the mosque allege that the opposition is part of a coordinated campaign against Muslim Americans.

“We actually are giving the community something to improve it,” said Ibrahim Anse, a spokesman for the mosque project. The opponents, he said, “are not from the area; they’re from outside. It looks like they failed [to halt the Islamic cultural center] in Manhattan, so they come to us.”

The dispute is one in a series of high-profile clashes over new mosque construction that is making headlines across the country in recent months. Mosques have been opposed in Staten Island, in Murfreesboro, Tenn., Temecula, Calif., and, of course, in Lower Manhattan.

Some Jewish organizations, including the Anti-Defamation League, have claimed to mobilize in defense of beleaguered construction efforts, even as the ADL has opposed the Lower Manhattan project as a special case, due to its proximity to Ground Zero. The Jewish civil rights group has formed an interfaith committee to support cases in which it sees anti-Muslim prejudice motivating the opposition. But the committee also recognizes that “local governments have legitimate concerns about zoning and other planning issues within the framework of current federal, state and local laws.”

The problem is, it’s not always simple to tell one from the other.

Standing on the porch of his home, directly across the street from the empty lot where the rallies were taking place, Steve Peskin said that he had chosen not to participate in the opposition rally — even though he opposed the construction of the mosque and had allowed organizers to hang signs on his house. Peskin, a 20-year resident of Sheepshead Bay, said that he doesn’t want the four-story building to be built, because of the heavy traffic and noise it could bring to the quiet neighborhood.

But he also said he wasn’t sure he would allow organizers opposing the mosque to place signs on his home again.

“They brought people in who aren’t from the neighborhood,” he said. “They’re anti-Muslim. What other reasons would they be here? Do they care that I have a lot of traffic here? No, seriously — they live in Queens.”

The rally was orchestrated by Bay People Inc., a group of Sheepshead Bay residents that organized in February to oppose the Voorhies Avenue mosque. Bay People spokesman Alex Tenenbaum rejected the charge that his group was motivated by bigotry. “We’re not fighting a mosque,” said Tenenbaum, whose backyard abuts the lot. “We’re fighting a community center that’s too big for this quiet neighborhood.”

Tenenbaum, 40, said that about half of Bay People’s 15 most active members are, like himself and many in the neighborhood, Jews who immigrated to the United States from the former Soviet Union.

The proposed mosque site is half a block from an elementary school, which Tenenbaum and other opponents of the project say already causes heavy traffic. “People are saying, ‘It’s New York, just live with it.’ But we never had these issues,” he said.

Tenenbaum also said that he objects to the Muslim American Society, the religious not-for-profit organization that will build the mosque. Bay People’s website links to a 2004 Chicago Tribune article that calls MAS an American arm of the Muslim Brotherhood, the Islamist organization founded in Egypt.

Supporters of the mosque dismissed this contention. They produced a letter from Rep. Michael McMahon, a Democrat whose constituency includes Staten Island and Brooklyn, reporting that he had inquired with the FBI about MAS. “They gave me no indication whatsoever that the Muslim American Society is affiliated with any organization that threatens our national security,” wrote McMahon, who initiated his inquiry in connection with a previous dispute over a proposed MAS mosque in Staten Island that was abandoned in the face of community protest.

It is not easy to stop a mosque on the basis of traffic or other zoning-related concerns – and for the same reason that it is not easy to stop the numberless shtiebels, that dot streets throughout Brooklyn, spawning traffic and noise of their own. That’s because of the federal Religious Land Use and Institutionalized Persons Act, passed by Congress in 2000 with unanimous consent and wall-to-wall support from religious groups ranging from Reform Judaism to evangelical Christian.

RLUIPA, as the law is known, prohibits government agencies from employing land-use regulations to stop construction of a place of worship unless they can demonstrate “a compelling governmental interest” — legal language for the most urgent sorts of concerns, such as national security or saving lives. Furthermore, the government must demonstrate that stopping the construction is “the least restrictive” means available for achieving its end. The combination adds up to a level of judicial oversight of such attempts that is known as “strict scrutiny,” the toughest standard the law can impose.

Nevertheless, neighborhood resident Henry Kleyman, master of ceremonies at the anti-mosque rally, said that Bay People had already raised significant funds, had hired a zoning attorney, and was planning to hire another attorney and a private investigator to examine the source of the project’s funding.

“We have enough money to have a lawyer go after them for a very long time,” promised Kleyman, a Jewish immigrant from the former Soviet Union.

Other rally participants made no pretense about zoning as their main concern.

“We are trying to stop Islamization of America,” said Vladimir Birmakher, a Jewish immigrant from the former Soviet Union who lives in nearby Bergen Beach. Birmakher said that he also had protested against the Manhattan Islamic cultural center, Park51. “I do not consider Muslims to be a part of a religious organization. I consider it a political organization to dominate the world and to change all of the rules and laws of any of the countries into Sharia law.” He continued, “[Muslims] should be outlawed in the same way the Fascist Party is outlawed in this country.”

Fascist political parties are not illegal in the United States.

Kleyman insisted that Bay People was not anti-Muslim and had no control over what the speakers said from the podium. “We chose people who were speaking. But some people wanted to talk. I didn’t know what they were going to talk about,” he said.

During the protest, Nedal Lulu, 21, stood among the mosque’s supporters, visibly upset. Lulu, who is Muslim, attended the elementary school around the corner from the lot and said that he plays basketball and handball every day in the park down the block. “It definitely hurts,” he said. The opponents “feel they lived here 20, 30 years, they can control this side of the block, when all those kids, all of us, we grew up here, and our parents have been here. And it’s not fair.”

But opponents far outnumbered mosque supporters at the rallies. A podium on the opponents’ side of the street bore an image of a massive dome and minaret superimposed over a map of the Brooklyn shore. In the cartoon, reddish circles spread from loudspeakers beside the mosque over the entire neighborhood.

“There are at least 200 [Muslim] families living in the neighborhood,” said Mohamed Sadeia, president of MAS’s Brooklyn and Staten Island chapter. “The Muslim community is growing so fast. They have the right to have a house of worship like everybody else.”

It is that very Muslim community growth that may be driving fears among the mosque protesters. If so, this would be but the latest case in America’s stop-and-go history of ethnic conflict and acceptance in changing neighborhoods.

There are no data on how many Muslims live in the neighborhood. But according to the latest data available through the New York City Department of City Planning, collected between 2006 and 2008, 4% of residents of the community district that includes Sheepshead Bay identify themselves as being of Arab ancestry. Meanwhile, 13.5% identify themselves as being of Russian ancestry and 9% of Italian ancestry.

Moreover, it is not simply a matter of being Muslim. Like many of Sheepshead Bay’s Muslim residents, Khaled Yafai, who has lived in the neighborhood for 15 years, is originally from Yemen. But at the closest mosque, on Coney Island Avenue, the worshipers are Pakistani, so Friday sermons are not delivered in a language he can understand. As a result, he must travel to Bay Ridge — 20 minutes away by car — to pray.

In the view of Michael Berenbaum, head of the Sigi Ziering Center for the Study of the Holocaust and Ethics at American Jewish University, the fact that so many of the Sheepshead Bay mosque opponents are Russian Jews — immigrants themselves — “may mean that they have not internalized the notion of religious freedom, which is essential to the American experience.”

But Berenbaum also saw the protests as part of a broader trend. “It’s coming in a context in which people are objecting to Muslim institutions essentially because they believe we are at war with Islam,” he said. “I think we have a great need for the creation of Muslim institutions in an American context, because the great hope of moderation in Islam is the degree to which they become American Muslims, and not Muslims who are responding to cultural trends of the Middle East.”

An ADL spokeswoman said the group had, as of yet, taken no stand on the Sheepshead Bay case.

Larry Cohler-Esses contributed to this story.

It’s Not Easy To Build a Mosque in Brooklyn, Either