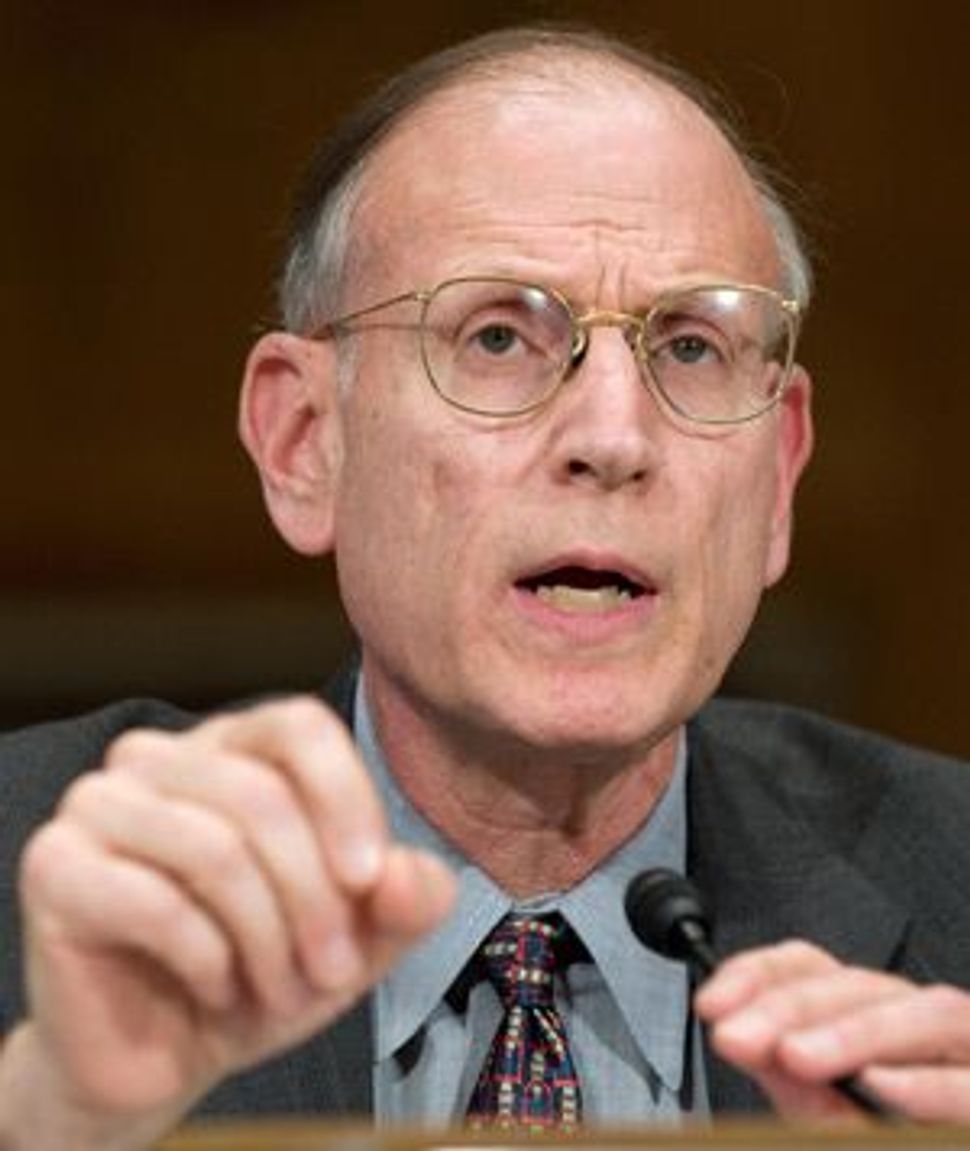 Defender: Stuart Eisenstat, a former under secretary of state, strongly defended the position taken by the ADL and American Jewish Committee. Image by GETTY IMAGES

Holocaust survivors denouncing the Jewish establishment would be a spectacle in almost any venue — and all the more so when it is under the bright lights of a congressional hearing. 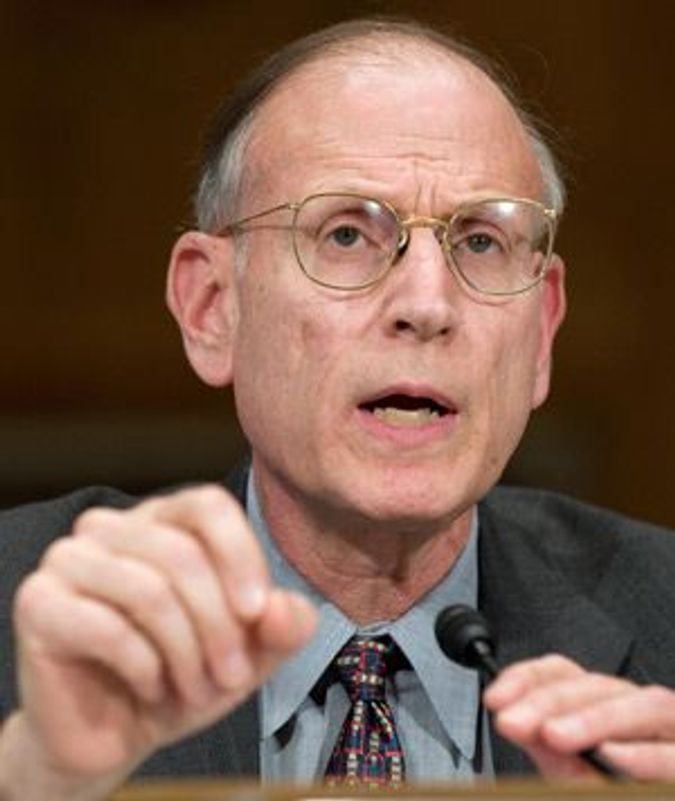 Defender: Stuart Eisenstat, a former under secretary of state, strongly defended the position taken by the ADL and American Jewish Committee. Image by GETTY IMAGES

The issue at hand before the House subcommittee on commercial and administrative law on September 22 was the Holocaust Insurance Accountability Act of 2010, a bill designed to give survivors and their heirs a right to sue insurance companies that they believe have reneged for decades on their duty to redeem policies that Holocaust victims took out before World War II.

But because of a settlement agreement forged years ago, most major American and international Jewish organizations oppose the legislation. So does the American Gathering of Jewish Holocaust Survivors. The process in place under this agreement, they note, has paid out millions of dollars, and a successor process continues to pay out more. But it also indemnifies the insurance companies against outside civil suits.

A group of survivors unhappy with the results of this process has been protesting it for years. And the congressional hearing was their moment in prime time.

ICHEIC, which ended its work in 2007, obtained payouts of more than $300 million to more than 48,000 claimants. And under a successor agreement, the insurance companies have agreed to continue to pay out Holocaust era claims filed via the Holocaust Claims Processing Office of the New York State Banking Department.

But under the process, the insurance companies’ prewar records have remained confidential.

Some of those who are unhappy with the results obtained via ICHEIC believe that through the discovery process of a civil suit, they could force the companies to disgorge those files and demonstrate the validity of their claims — even at the higher level of documentation that the court process would demand.

“Of course I would like to go to court,” one of those survivors, Jack Rubin, told the Forward. “I’d go to court for one simple reason — because of the thousands and thousands of policies that no one will ever be able to claim.”

Rubin, 83, of Boynton Beach, Fla., remembers from his childhood in Czechoslovakia seeing his parents meet with an insurance agent. He can recall clearly the plaque placed on the front of their store, stating that Generali, one of the largest insurance firms at the time, insured it. But when he filed his claim through ICHEIC, Rubin was notified that no information on such a policy existed. He was granted only a $1,000 “humanitarian allowance.”

The ICHEIC process left many observers frustrated with the relatively low sums survivors received. A 2007 study by economist Sidney Zabludoff, an independent consultant, estimated that the current value of unpaid Holocaust era policies held by these companies was about $17 billion. But under the terms of the ICEHIC agreement — and a 2003 Supreme Court ruling affirming those terms — the disgruntled are barred from going to court.

The Holocaust Insurance Accountability Act would sweep away that restriction. Introduced by Rep. Ileana Ros-Lehtinen, a Florida Republican, the bill has 37 co-sponsors, 12 of them Jewish. That’s less than half of the House’s 30 Jewish members, reflecting the ambivalence that exists over this issue in much of the wider Jewish community. Some who previously supported the legislation, like California Democrat Henry Waxman, now oppose it.

The measure’s lead support group in the Jewish community is the Holocaust Survivors’ Foundation — USA, a Florida-based organization. The foundation and three dozen other groups representing survivors and their heirs told the hearing they deserved their day in court.

But Roman Kent, chairman of the American Gathering of Jewish Holocaust Survivors, sent a statement to the subcommittee, arguing that the legislation would cause more harm than good by endangering the payout agreements already reached and those still to come. The best course of action, he argued, would not go through the courtroom.

Some of the groups backing the legislation charged that national Jewish organizations opposed it because of their financial ties with European insurance giants. In a submission to the committee, HSF leaders noted that the Anti-Defamation League, an opponent of the measure, had received $100,000 in 1999 from Generali for Holocaust-education programs. The American Jewish Committee, another opponent of the bill, had partnered with the German insurance company Allianz to fund Holocaust-related educational trips to Europe for young professionals, the backers noted.

“If ADL takes from Generali and AJC takes from Allianz, you do have to question their motives,” said Dubbin, the lawyer representing the bill’s proponents, at the hearing.

“It is an outrageous charge,” said Rabbi Andrew Baker, director of international Jewish affairs at the AJC in an interview with the Forward. Baker, along with representatives of other Jewish groups, suggested it was lawyers for the other side, such as Dubbin, who had vested interests.

“I can’t see how this legislation helps survivors,” Baker said. “The only ones to benefit from such legislation are the litigators.”

Dubbin responded that lawyers dealing with these cases would profit only if a judge and jury ruled in favor of the survivors. “In that case, any lawyer would deserve compensation,” he said.

Dubbin pointed in the hearing to Kenneth Bialkin, who was the ADL’s national chair from 1982 to 1986 and chaired the Conference of Presidents of Major American Jewish Organizations from 1984 to 1986. Bialkin, a prominent lawyer, serves as chief counsel for Generali. Dubbin believes this was also a factor in influencing Jewish groups to oppose the bill.

Bialkin, in response, called the claim “scandalous.” Via email, he said he had not advised ADL on the issue of insurance claims. “I had no – absolutely no –contact with anyone in ADL on this subject,” Bialkin said.

The fiercest rebuttal to Dubbin and the survivor groups’ claims came from Stuart Eisenstadt, a former under secretary of state, who played a major role in most Holocaust-era restitution and compensation negotiations, including the ICHEIC process. “The record should not stand for these allegations,” a visibly angry Eisenstadt told the committee as he described the work done by the AJC and ADL to help Jewish survivors.

Noting the New York State Banking Department’s continuing work in processing claims, Eisenstadt told Dubbin: “Give us the names of your clients, and let us go through the process. I want every single policy paid.”