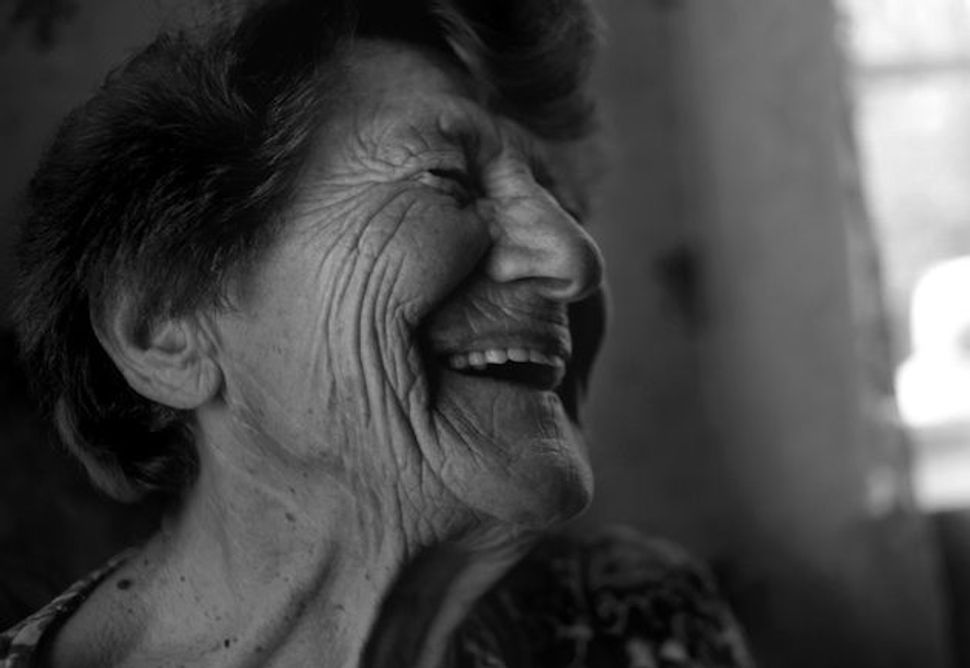 The interviews we see in Holocaust documentaries are but fragments of lives. Subjects talk about their horrendous concentration camp experiences, and the story ends. But suffering has continued in Belarus for many of the elderly, who are among the poorest Jews in the world. Unlike survivors who moved to relatively comfortable circumstances in Israel or the United States, those who remained in Belarus endured religious intolerance under the Soviets after the war. Now they are finishing their days with further deprivation.

It’s a lonely life for Jews who returned to their shtetls after nearly everyone else was massacred. More than 600,000, or 90%, of Belarusian Jews were exterminated in the Holocaust. Today, most of these market towns have but a handful of Jews left struggling to get by on pensions so slim — sometimes no more than $120 a month — that they sometimes have to choose between heat and food. These survivors are often sickly, and unlike most Belarusian elderly, they lack extended family to take care of them.

People in villages can count on potatoes and cucumbers grown on small plots behind their homes, provided that they are in good enough physical condition to bend down and harvest them. Often, isolated seniors rely on neighbors and the American Jewish Joint Distribution Committee which, through Hesed welfare centers, provides home visits, meals and winter aid. For Nazi victims among these elderly, aid from the Conference on Jewish Material Claims Against Germany is distributed by the JDC. The help isn’t much, and sometimes visits are no more frequent than once every three months. But it all alleviates suffering and reminds Belarus’s lonely elderly citizens of communities lost.

What the aid cannot restore is the collective memory of shtetl life that is about to vanish. When these last people pass on, so will 350 years of vibrant Jewish tradition in Belarus, which was once a major center of European Jewry and the cradle of Hasidism.

The Forward’s Judith Matloff recently traveled throughout Belarus to document some of the last shtetl Jews there. Here are some of their stories:

Grigory Hosid survived pogroms, jumped off a death train bound for Treblinka and wandered 300 miles in the forest on his way to fight with the Bielski partisans. Liberation did not bring an end to his travails. When he returned to Grodno after the war, Hosid found that his family had perished and that only 200 of the city’s Jews remained. Over subsequent years, he zealously nurtured a rebirth of Jewish life in Grodno and served as an active member of the small but reviving community, which weathered anti-Semitism better than smaller villages.

Until a recent stroke confined him to his apartment, Hosid was a prominent member of the dilapidated 17th-century synagogue. Yet, robust immigration to Israel pains him. Many of his generation have made aliyah, as have droves of youths to whom he taught Hebrew. He has no savings or relatives to take care of him, and a stroke makes it difficult to focus on reading or the radio news. Hosid says he feels abandoned. “I made many mistakes in my life, and my big mistake was to stay in Grodno,” he reflected. Hosid lives alone and relies on daily visits by community members for meals and home care. Dependent on a walker and suffering from heart and stomach diseases, he rarely worships outside the home. “Now I am here alone,” he said. “What can I hope? Grodno for me is like a cemetery.”

Riva Katz yearns for company, but osteoporosis and other ailments keep her from going out much. Her small wooden house is filled with books, Katz’s greatest joy other than a white dog and the brother who live with her. She watches television all day to break the isolation. Before the war, she had friends of all faiths. There was one special boy whom she liked, Meyer. Her family spoke Yiddish and sent her to Hebrew school and synagogue, held noisy Seders at home and baked gefilte fish on Fridays. (“Mama’s cooking was delicious, except for the matzo ball soup,” she recalled.) Then came the German soldiers. Her parents and Meyer were murdered. Katz and her brother fled to Tashkent.

Upon returning in 1944, they moved to Ivenets to be close to the few acquaintances who had survived. Katz married, raised a son and worked in a bookstore. The Soviets shuttered the synagogue, so she ceased observing religion. “It was tough not to have the traditions, but we were okay because we had very good friends,” she said.

Now most of these friends have died or moved to Israel. Only one other Jewish family remains nearby. Hesed workers check up on Katz periodically and make sure that she has enough food and heat. But she lives too far away from the nearest synagogue to worship with others.

For Faina Paley, life has entailed loss, loss, renewal and loss. Her family fell apart when she was 7, when her father went to the front to fight against the Nazis. She fled with her mother and three siblings to exile in Uzbekistan, and narrowly escaped death when the Germans bombed her family’s train. Their return to Bobruisk, in 1944, meant more agony. Paley’s father and everyone she had known before the war had died. The Soviets closed Jewish schools, and what was left of her circle worshiped clandestinely in private homes.

After the Perestroika political reforms of 1988, religious restrictions loosened. Paley and others co-founded a Jewish club, in which she took an energetic part. But she has lost that sense of solidarity. Only two members of the group are left, the rest having immigrated to Israel or the United States. There’s an active Jewish community center, but young people continue to move abroad, feeding her profound depression. “I miss the people that left,” she said, breaking into tears. “I miss the culture, the community that was. When I go to the cemetery, I miss all the people who are no longer here. This is where my soul is. But I’m alone.”

Grigory Kagan considers himself lucky. Two strokes have limited his mobility, but his wife is still alive to care for him. The modest land behind his wooden cottage yields much to eat: carrots, onions, apples, pigs (yes, pigs), berries and chickens. Hesed workers fill in the gaps with supermarket goods and medicine, and have provided a television.

At age 11, Kagan was the sole survivor of a massacre of 3,500 Jews, who were running away as German troops lined up victims to execute them next to freshly dug pits. He sought refuge with friendly villagers nearby, and changed his surname to the Christian-sounding “Zakharivich.” The ploy worked until he was briefly interned in a concentration camp for children two weeks before the region was liberated. Kagan escaped from there, too. After the war, he worked as chairman of a collective farm and had five children to, he said, “replace my family that was killed.”

Today, he is the last Jew of the town of Kirovsk. Kagan says he doesn’t know any Jewish traditions, having grown up on a collective farm surrounded by Belarusians. His wife isn’t Jewish, and his children weren’t raised as such: “People will say, ‘Do you know Rosh Hashanah or Shabbat?’ I’ve heard of it in that I know it existed, but if you are asking if I celebrated it, no.” Yet, he feels Jewish: “Well, the Nazis treated me like I was Jewish. They wanted to kill me.”

Ida Kaslova does not observe Judaism, but she says she feels it “in my heart.” Her identity was in the minds of her tormentors, too. Kaslova’s earliest memory is of fleeing to Russia in 1941 at age 7, when German troops invaded Belarus. Her mother rushed her onto a cart, “like a gypsy,” she recalls. Exile was tough, but the return in 1944 was worse. Kaslova came home to learn that her father and relatives were killed and that her house burned down. What was left of the family camped in a train station for months until moving into a windowless hut. School days were painful, too: “I talked to [the children], but no one spoke to me,” she said flatly.

As an adult, Kaslova worked as a shopkeeper and wed a Russian, because “there were no other Jews here.” Her husband opposed joining her brother in Israel, where she thought she might finally belong.

Now widowed, Kaslova lives in an apartment decorated with her husband’s Russian icons. She can barely walk, because of the sores and swelling on her legs, and depends on caseworkers to bring her food and medicine. Kaslova is the last surviving Jew of Buda-Koshelevo, and keeps to herself after a lifetime of anti-Semitic taunts and snubs. “I got used to being alone,” she explained.