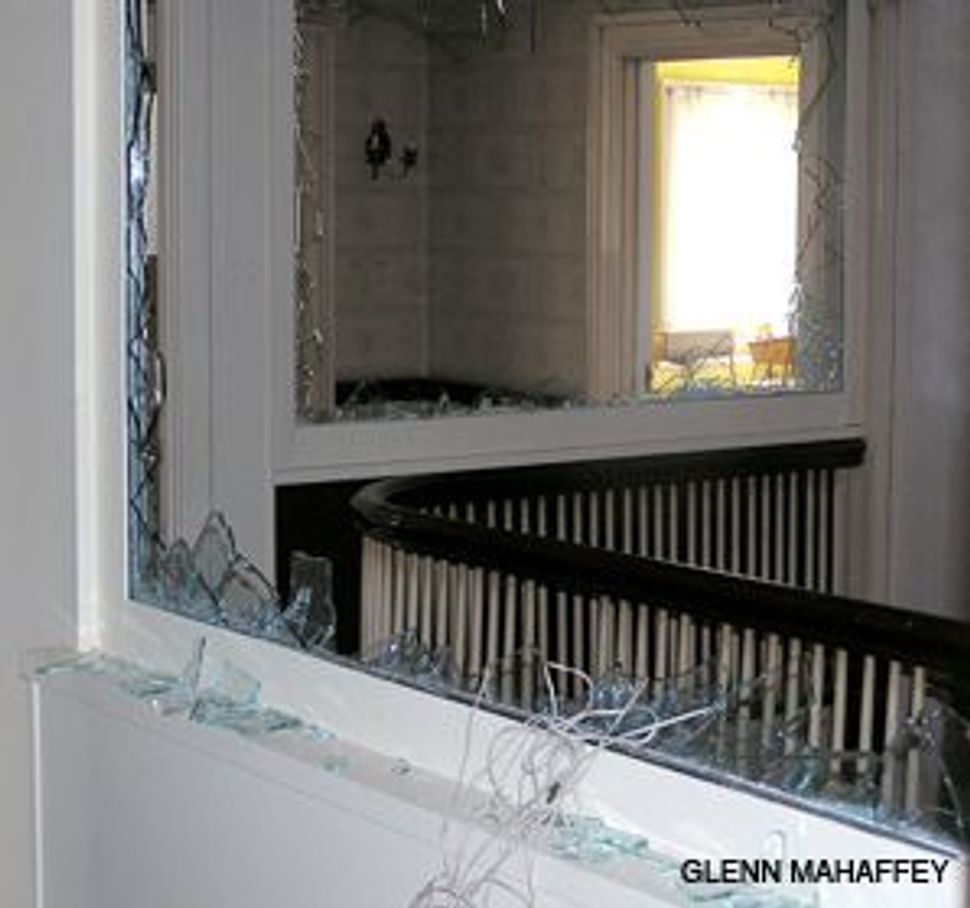 A small Jewish community in Central New York suffered a near-fatal blow last week when the region’s only synagogue was vandalized. 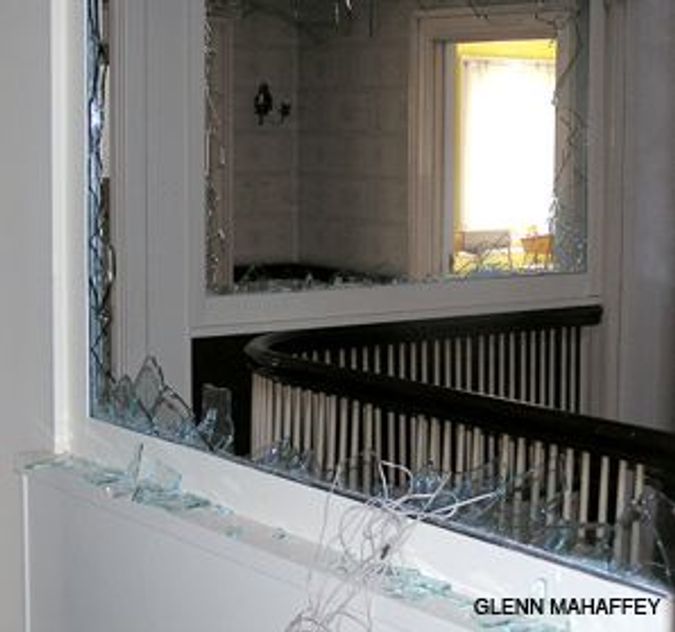 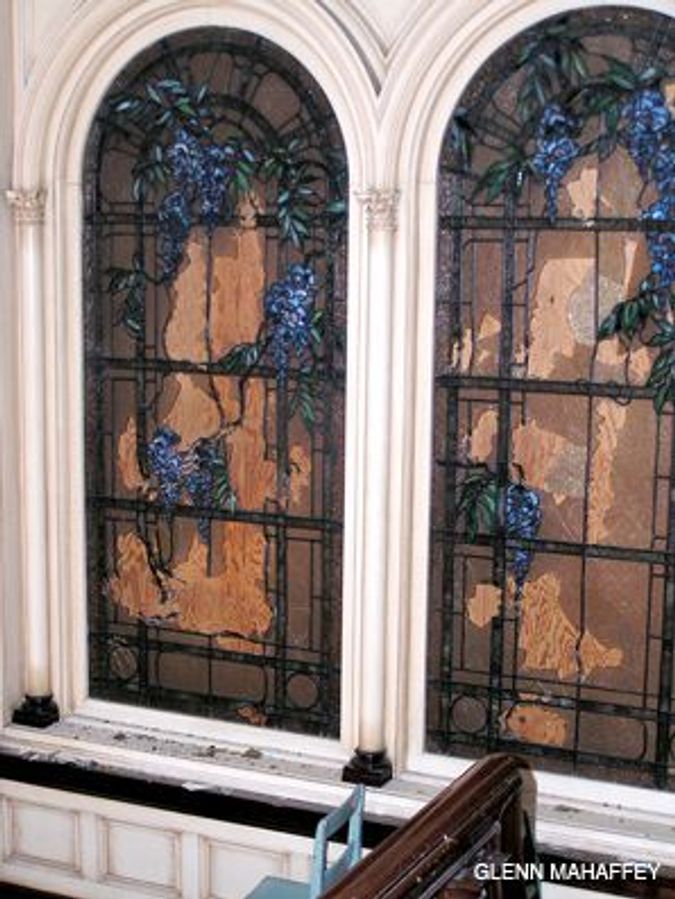 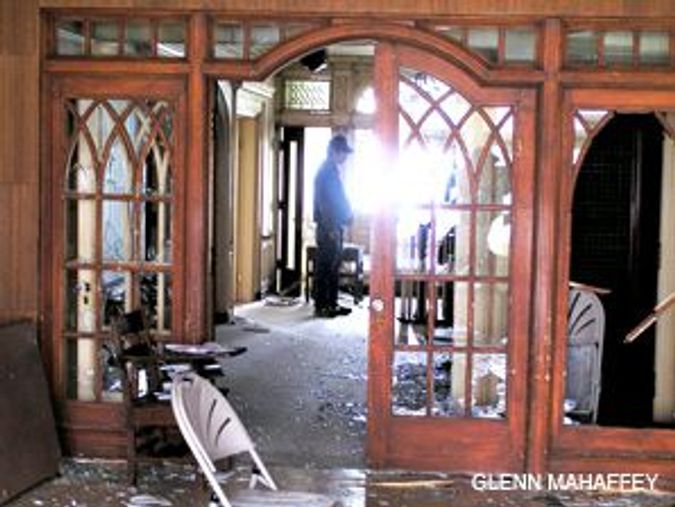 Damage Control: The interior of the three-story Norwich Jewish Center was vandalized.

The Norwich Jewish Center still stands, but much of the building’s interior was destroyed. No one was harmed in the attack, which took place on Sunday, April 6, as the building stood empty. Three teenage boys, between the ages 13 and 14, have been charged with perpetrating the attack.

The incident proved to be far more than an unsettling nuisance, as it left some congregants wondering if the community had the resources it needed to pick up the pieces and move on. Even before the attack, the congregation had been struggling with declining numbers and limited funds — a situation that may have exacerbated the damage done.

“They’ve been talking about selling the synagogue for some time, so they were underinsured,” said Jessica Rosenblum, a senior associate at a public relations firm in Washington who grew up in the community. “The congregation as a community will probably continue to exist in some form, but without a physical building.”

The congregation has dealt with vandalism before, when the Jewish center’s windows were broken in an incident ruled to be a hate crime.

The Norwich Jewish Center’s membership is small but feisty, according to congregants. Because there are no other synagogues in the area, members’ personal affiliations range from Orthodox to Reform, and all have had to make compromises. The synagogue itself is unaffiliated with a movement and has no full-time rabbi. A part-time rabbi comes up twice a month from New York City.

“They argue. They get angry at each other. But that’s all we have,” said Leslie Dopkeen, the synagogue’s co-president (and Rosenblum’s mother). “I’ve never been to another temple where it made so much of a difference if you were there or not. There’s an amazing feeling of warmth.”

Until recently, an important contingent of the congregation was a group of cattle farmers who had settled in Central New York after fleeing Nazi Germany. As they and others in the community have aged, the congregation has shrunk to about 25 families.

Ken Hermann, 87, a retired dairy farmer who escaped Germany a month before the Nazis invaded Poland, said that the attack on the synagogue “brings back memories of the Holocaust.”

“We feel discouraged and frightened, and we hope it won’t happen again,” Hermann added.

Dopkeen discovered that the synagogue had been vandalized when she arrived there for a meeting April 9, three days after the incident had taken place. “Almost everything that could have been broken was,” she said. There were indications, she reported, that the perpetrators had tried unsuccessfully to burn down the building.

In a press release, the Norwich Police Department said that “the entire interior of the large three-story structure was vandalized.”

The congregation’s Torahs, however, were untouched.

Though the damage included one piece of antisemitic graffiti, the age of the alleged perpetrators has called into question whether the attack was a bias crime.

“I don’t think they had a real sense” of why they were targeting a synagogue, Dopkeen said. “I’m not sure they even know a Jew.”

The suspects were apprehended April 12 and have been charged with burglary, criminal mischief and conspiracy. According to police, one boy, accompanied by his mother, turned himself in and then identified the other two suspects.

Initial estimates of the damage ran to tens of thousands of dollars. How much of the damage will be covered by insurance is still being determined; meanwhile, community members in Norwich and its environs have offered physical and financial help.

“It’s a catastrophe,” said congregant Harold Berman, 85. “But we are going ahead and rebuilding and are going to continue.”