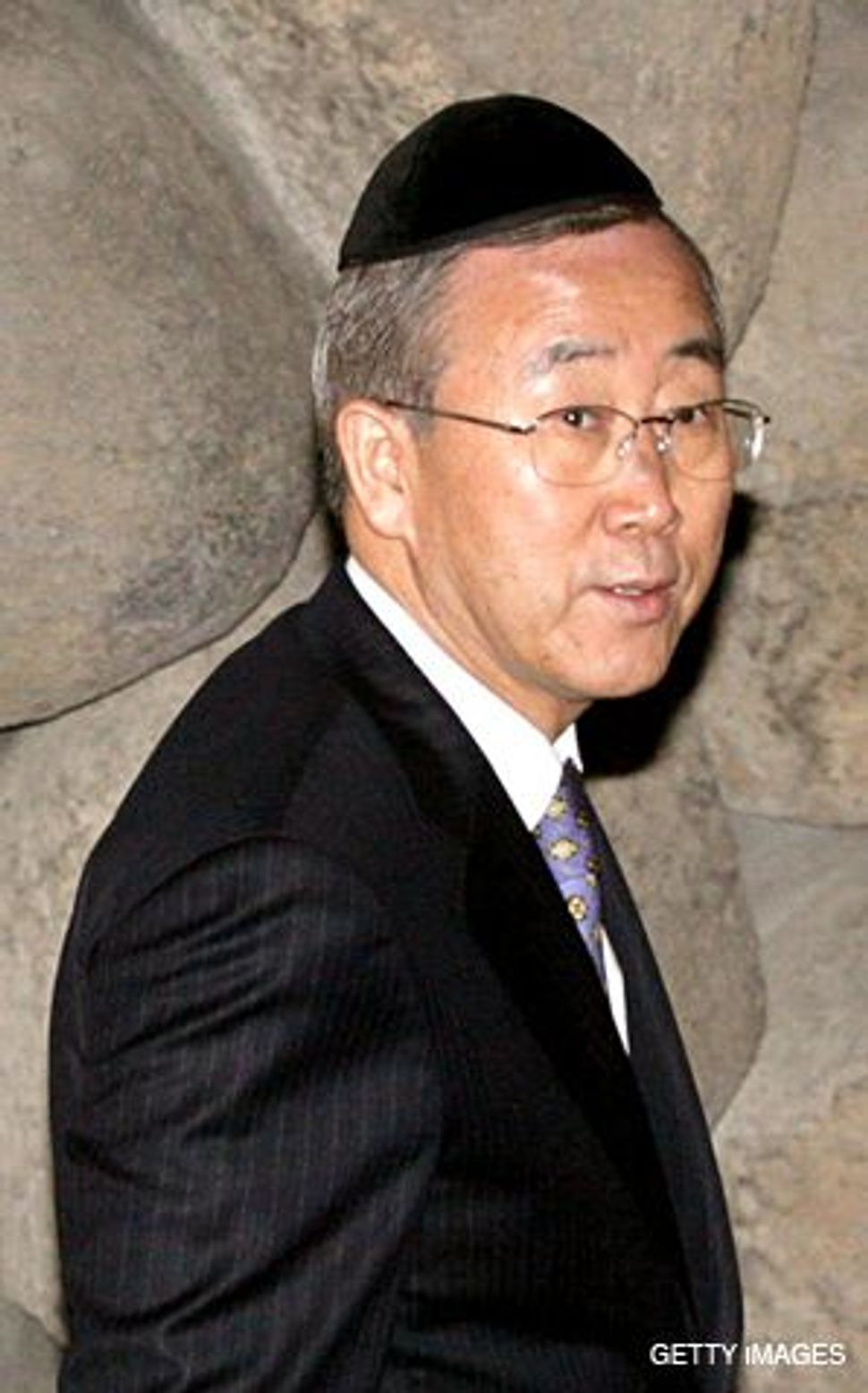 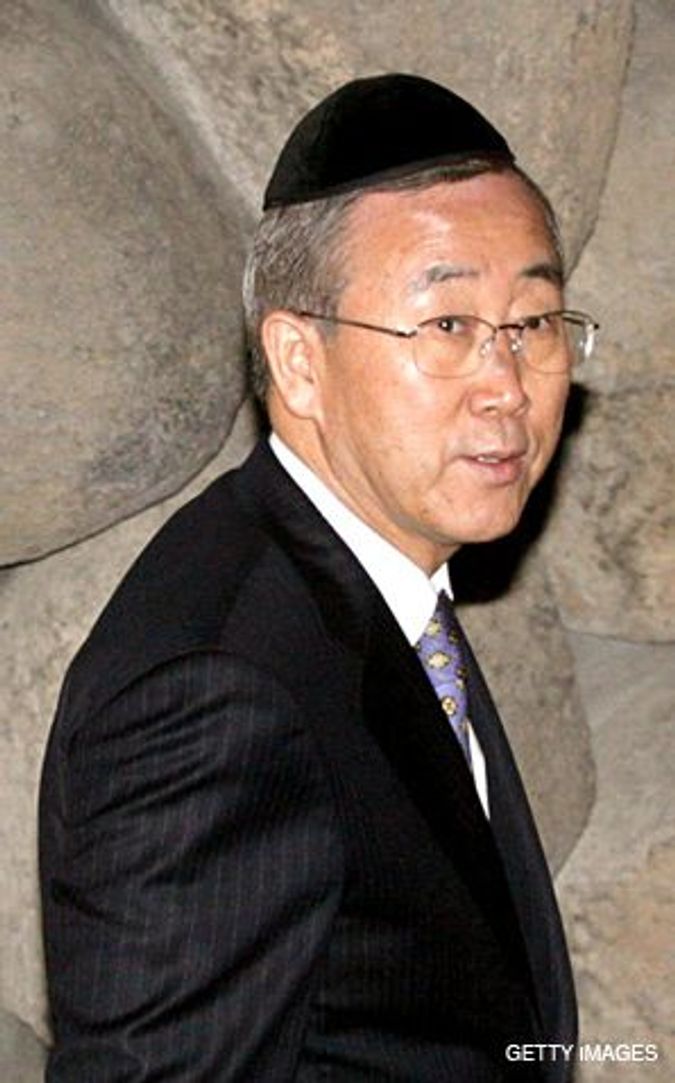 Since his election to the post more than a year ago, Ban Ki-moon has not heard much noise from a notoriously talkative corner when it comes to the United Nations: Israel and its supporters.

Unlike most of his predecessors, who have routinely incurred the wrath of Jerusalem for their perceived pro-Palestinian biases or their harsh condemnations of Israeli military actions, the South Korean diplomat has earned praise even among hardliners for his hands-off attitude on the Israeli-Palestinian issue.

“He has a far more balanced approach to the Israeli-Palestinian issue,” said Vivien Weissman Howard, head of the U.N. task force at the American Jewish Congress. “He has set a tone that is appropriate for his office.”

Ban’s positive image among Jewish communal organizations is striking not only in comparison with his predecessors but also considering that the U.N. remains a favorite target of criticism by pro-Israel groups because of what many observers believe is the excessive focus of several U.N. bodies on Israel. Ban has actually echoed the views of Jewish communal organizations vis-à-vis those institutions. In one case, he candidly criticized the Human Rights Council for singling out Israel in a statement issued last June.

But what has most endeared Ban to pro-Israel activists is the substance of his statements related to the Israeli Palestinian issue. By balancing criticism of Israel and the Palestinians in a more obvious fashion, he has avoided the charge of “moral equivalency” between Palestinian militants and Israeli government actions often aimed at his predecessor, Kofi Annan.

This week, for instance, he issued a statement in which he condemned the civilian casualties among Palestinians in Gaza and called on Israel to abide by its obligations under international humanitarian law, but also reiterated his condemnation of rocket fire against Israeli civilian targets. U.N. watchers have noticed that Ban has been outspoken in his denunciations of Hezbollah’s rearming in his reports on Lebanon, even taking the rare step of mentioning Israeli intelligence estimates.

“Despite the pressure from a number of member states and from the U.N. establishment, the secretary general has been more outspoken and brave than the Security Council in two recent instances,” said Dan Carmon, deputy permanent representative of Israel to the U.N., in reference to Ban’s condemnation of suicide bombing in Jerusalem and his reports on Lebanon.

Ban cultivated Israel and its supporters during the election campaign in late 2006 by meeting with a variety of Jewish groups and then issuing strong condemnations of terrorism and the Holocaust denial pronouncements of Iranian President Mahmoud Ahmadinejad.

One of Ban’s first trips as secretary general was to Israel and the Palestinian territories, during which he won mostly positive reviews from Israeli officials as well as from American Jewish groups. Upon his return and following a meeting with him, the Anti-Defamation League’s national director, Abraham Foxman, issued a statement claiming that “the secretary-general demonstrated to us his grasp of Israel’s security concerns, having seen the country and its borders up close.” Ban has also maintained a so-called “focal point” for Jewish groups within his office that was created by Annan toward the end of his tenure to improve an often tense and dysfunctional relationship.

“The tortuous relationship between Israel and the U.N. has been steadily improving over the past decade, but it’s true that this secretary general has a positive image among Jews and in Israel,” said Stephane Dujarric, the current liaison, who is said to be leaving his position soon.

While some believe that Ban’s youth in South Korea, living under the constant threat of war with North Korea, helped shape his views of the dangers facing Israel, others argue that his attitude toward Israel arises from the fact that he did not come from within the U.N. bureaucracy like Annan.

As a result of all this, Ban has become a bete noire of Hezbollah. A few months ago, the Shi’ite militia hung posters bearing a picture of him wearing glasses with the Israeli flag on one shade and the American on the other, with a caption saying: “This is how the secretary-general sees the world.” They were taken down after a formal complaint by the U.N. and the Lebanese government. “He has a serious image problem with the Arabs” because of his good relations with Israel, said one U.N. official, who asked to remain anonymous.

Moving forward, officials within the Secretariat are fretting that tensions with Israel could arise in coming months around a meeting slated for next year to review the work begun by a notorious U.N. conference on racism, held in the South African town of Durban in 2001. The first meeting featured anti-Israeli advocacy by nongovernmental organizations holding a parallel forum. Both the Israel and United States delegations left that conference and both have indicated that they will not participate in next year’s conference. While the Secretariat is not directly involved in its preparations, there are concerns that if the meeting turns into a rerun of the first conference, it could end up hurting the U.N. and its leadership. Dujarric expressed hope that a more refined understanding of the U.N. would help assuage any misunderstanding.

“I think that just as the U.N. has become more attuned to Israel’s views, there is a better understanding among pro-Israel advocates about the complexity of the U.N,” he said.