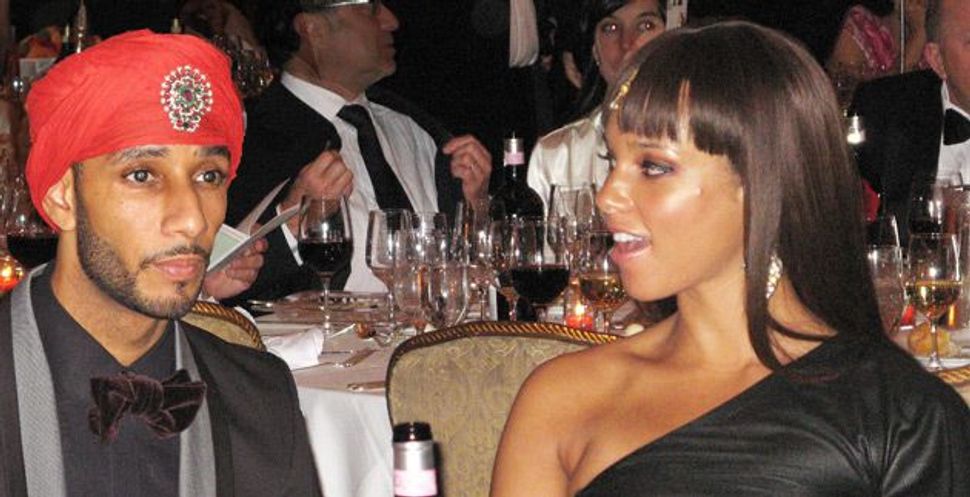 The Many Splendored Tony Curtis — Hollywood Hunk and Humanitarian

Bronx-born Tony Curtis (ne Bernie Schwartz), who died at 85 of cardiac arrest in Las Vegas on September 29, portrayed an astonishing range of characters. These included Antoninus, a Greek slave, in “Spartacus” (1960); the Brit-Norse slave Erik, half-brother of Viking Einar, played by (yet another son of Jewish immigrants) Kirk Douglas in “The Vikings” (1958), and Andrei, a Cossack son of Cossack leader Taras Bulba (Yul Brynner) in “Taras Bulba” (1962), based on Gogol’s novel of the same name. Curtis, who plays Andrei, falls for Polish princess Natalia (Christine Kaufmann), who, following Janet Leigh, became Mrs. Curtis No. 2. But from his Oscar-nominated role in “The Defiant Ones”(1958) to the hilarious “Some Like It Hot” (1959), Curtis’s least-known role was perhaps that of the founder of the Emanuel Foundation. Named for Curtis’s father, Emanuel Schwartz, the organization’s aim, as stated in its literature, was “keeping alive the memory of the more than 600,000 Hungarian Jews murdered in the Holocaust.”

At the October 30, 1995, Emanuel Foundation Benefit Gala, held at The Pierre, Curtis arrived sporting a wide black-velvet cravat, an unbuttoned white shirt and a white rose in his midnight-blue velvet jacket lapel. In Hungarian, he declared: “I am Jewish, Hungarian and American!” Switching to English, he continued: “I didn’t grow up being recognized as a Jew. My parents inculcated in me a sense of Jewishness, but I grew up amongst gentiles. I’ve seen the best and the worst in both. We use our heritage as best we can, but should express our humanity.” Accompanying Curtis was his then inamorata, 42 years younger horse trainer Jill Vandenberg, a statuesque blonde poured into a deep décolletage white satin gown and wearing elbow-length gloves. During our predinner chat, she told me: “I’ve been his girlfriend for the past year.” Then tilting her head, she added, “As long as it lasts.” IN 1998, she married Curtis, becoming his sixth and final wife.

The evening’s recipient of the organization’s Lifetime Achievement Award for work dedicated to the memory of the Holocaust in Hungary” was presented to writer Joe Eszterhas for the film “Music Box” (1989), which linked Hungary’s pro-Nazi party, the Arrow Cross, with the destruction of Hungarian Jewry.

At the June 8, 1997, Emanuel Foundation dinner at the Grand Hyatt, Israel Singer, then secretary general of the World Jewish Congress, informed attendees that as of July 1 of that year, “Holocaust survivors would finally get pensions.” Addressing the gathering, Kelly Curtis said: “In the name of my father, Tony Curtis, and my grandfather, Emanuel Schwartz, after whom the foundation is named, I thank you. The lives of Jews in Hungary have improved because of the work done by the people at this table.” She pointed to dignitaries on the dais. Among these were Ronald Lauder and Rep. Tom Lantos, who told the crowd: “My wife Annette’s cousins were the famous Gabors — mother, Jolie, Magda and Eva and the still alive Zsa Zsa. The [Gabor] family were members of the Dohány [Street] Synagogue in Budapest.”

Emanuel Foundation honorees include journalist Kati Marton and her husband, then assistant Secretary of State Richard Holbrooke, and** Judith Leiber**, whose gem-encrusted handbags are owned by queens, presidents’ wives and movie stars and are on display at the Smithsonian in Washington.

There was an unexpected guest at the black-tie gathering of diplomats and high-profile patrons September 21 at the Appeal of Conscience Foundation’s Awards Dinner: the stunning (and very pregnant) Grammy Award-winning Alicia Keys. With her was her husband, record producer and rapper Swizz Beatz, who wore a bejeweled red turban, possibly in honor of the evening’s World Statesman Award recipient, India’s prime minister, Manmohan Singh. Also honored were 34-year old John Elkann, chairman of the Fiat Group, who wowed the guests with his extempore address highlighting his Jewish-Italian roots, and his business and human values savvy. Honoree Stephen Schwarzman, who is chairman, CEO and co-founder of the Blackstone Group and has personal philanthropy that runs into the hundreds of millions of dollars, recalled the still smarting anti-Semitic encounters of his youth. Foundation president and founder Rabbi Arthur Schneier introduced Israel’s president, Shimon Peres, who opened with: “They say Israel is very unpopular in the world. I have breaking news: I think Israel is the most popular country in the world. Let me explain: There is this small country, India. They support Israel. One of the greatest poets of India was Jewish. His name was Nissim Ezekiel, [and he] said: ‘You are alone. We are alone. Let us be alone together.’”

Peres continued: “We have excellent relations with China, which is not bad. I don’t know if every Chinese knows the history of the Jewish people. But they have their own versions.” Noting that four names are familiar to the Chinese as the Jews’ fathers — Karl Marx, Sigmund Freud, Albert Einstein and Henry Kissinger, “The common thinking goes: ‘If you have such wise fathers; you must be a wise people.’ We have improved relations with Russia. If you add it all up, you have already several billion people. I don’t know if there are other countries who have it.” Peres also noted: “Since Jesus Christ, Jews and Christians have not had as excellent a relationship as today. We are in the beginning of a new attempt to make peace with the Palestinians. I hope we shall bring peace to our children and to Arab children.”

Tall, handsome and self-possessed, Elkann thanked Schneier, the guests in the Waldorf-Astoria’s ballroom, members of the dais, other speakers and fellow honorees. “On my father’s side, I come from a Jewish family and was brought up with those values,” he said. On his mother’s side, he had values as part of “a Catholic family. My mother remarried a Russian Orthodox. So the world opened up.” World traveled and educated, he noted that at “Fiat and Chrysler, [there] are two very big cultures with a big past, and we are engaging in the future. And there is no ethnic stripe about them.” He recalled his grandfather, Giovanni Agnelli, who as a teenager took him to an exhibition in Venice of paintings by Canaletto. “You saw a view of a marketplace… people coming from everywhere, trading. And he was telling me how Venice was an especially important trading hub from 1200–1400 between West and East. It was because it believed in tolerance. People from many religions could live there, work there.” He added: “And, if you weren’t tolerant, you were punished…. One thing [my grandfather] taught me then is [that] where trade passes, generally wars don’t pass.” Elkann and his stunning wife, Lavinia, have two sons, Leone and Oceano.

The evening’s introducers and speakers included Cardinal Theodore McCarrick, who delivered the invocation; Paul Volcker, currently chairman of Obama’s Economic Recovery Advisory Board; William “Bill” Burns, former ambassador to Jordan, now U.S. under secretary for political affairs; Paul Fribourg, chairman and CEO of Continental Grain Company, and Muhtar Kent, chairman and CEO of the Coca-Cola Co. Kissinger introduced Singh — who greeted the guests via video — and, together with Volcker and Schneier, presented the Appeal of Conscience World Statesman Award to India’s ambassador, Meera Shankar, who accepted it on Singh’s behalf.

During my dinner chat with Keys, whom I first met in 2001, when Clive Davis introduced her as a rising star to a thunderstruck crowd in the same ballroom, I asked her why she was at the event. “I heard they do good work,” she said, smiling graciously.