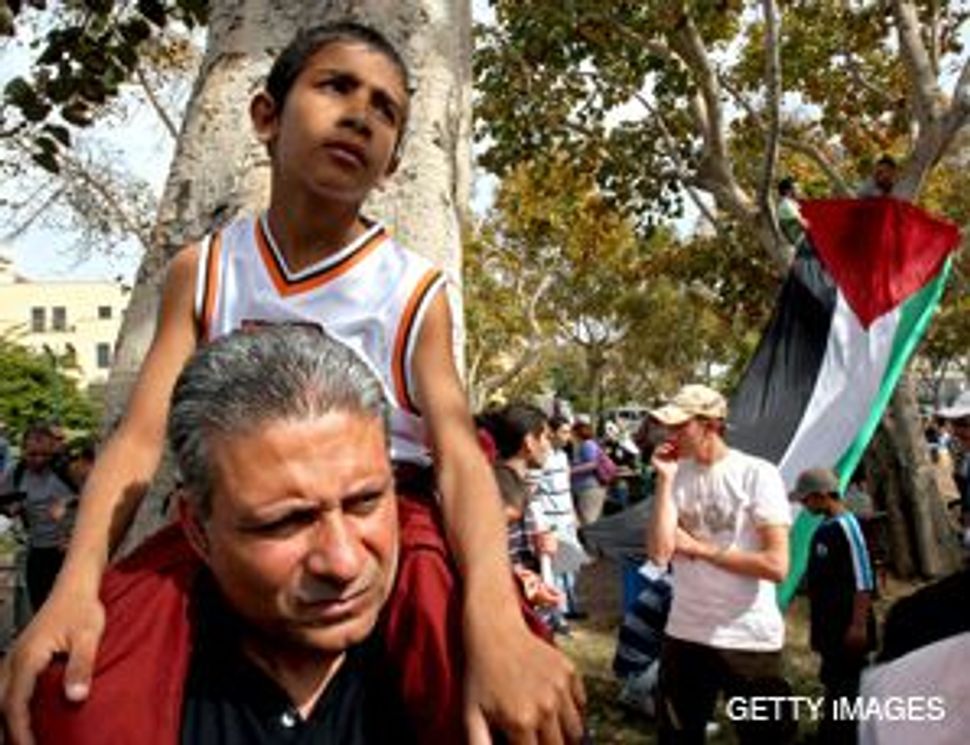 JAFFA: Israeli Arabs take part in Land Day protests in Jaffa, the first time the mixed Arab-Jewish city was a focus of the annual demonstrations against Israeli land policies.

Nazareth, Israel – Among the many tools used in the battle between Israel’s Arabs and Jews, you can add a new one: gentrification. 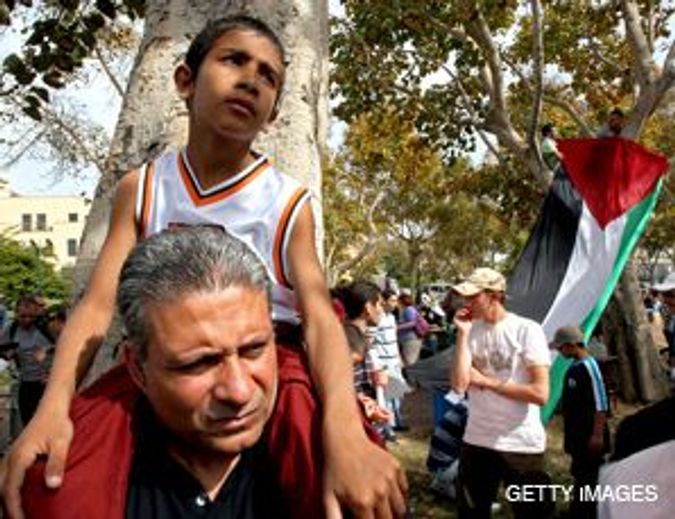 JAFFA: Israeli Arabs take part in Land Day protests in Jaffa, the first time the mixed Arab-Jewish city was a focus of the annual demonstrations against Israeli land policies.

The Arab Association for Human Rights alleges that Arab residents in a seaside neighborhood of Jaffa are being driven out so that the area can be developed for wealthy Jews.

Three years ago, Amidar, the government company that manages state-owned properties, sent letters to 497 householders in Jaffa. According to company secretary Eran Cohen, 200 were eviction notices to people who had illegally entered properties and now live there rent-free as squatters without contracts.

Jaffa, a mixed Arab-Jewish city on the Tel Aviv outskirts, has long experienced tensions between its Arab and Jewish residents. This began in 1948, when some Arabs charge that there was a mass expulsion of Arabs from the city. There are also complaints that from the 1960s to the mid-1980s, the Tel Aviv-Jaffa municipality neglected the area and imposed building restrictions in Jaffa to frustrate development of Arab neighborhoods. Now, though, advocates for Israeli Arabs say that the government is using economic development to drive out Arab citizens.

“The market is today carrying out Zionism’s aims,” said Tarek Ibrahim, director of research for the Arab Association for Human Rights, or HRA, and the author of a new report titled “Unprotected Citizens.”

“It is true that gentrification happens all over the world,” Ibrahim added, “but the people behind this policy know that Judaization will be the result, and want it to be.”

The government company under the glare claims that it is merely straightening up the government’s property portfolio in Jaffa, which it took over six years ago. Cohen says that the new report is mischief making by politically-minded leaders.

“In the last couple of years, what you see is a younger leadership within Jaffa that wants to push to a somewhat more radical politics. Instead of describing themselves as Israeli Arabs, they say they are Palestinians,” Cohen said.

The arguments in the report appear to be taking root among Jaffa’s Arabs. For the first time since it was instituted in 1976, Land Day, the annual protest against alleged appropriations of Arab land by Israel, was marked last month in Jaffa. Never before was it marked in a mixed Jewish-Arab town.

Around 1,000 people, mostly local Arabs, attended. Jamal Zahalka, chairman of the Arab political party Balad, declared: “Sixty years ago there was a mass expulsion from Jaffa. We won’t let the expulsion happen again.”

Dan Rabinowitz, an anthropologist at Tel Aviv University and a specialist on mixed Jewish-Arab towns, said the Arabs appear to have a point.

“Gentrification in Jaffa is designed to be construed as the invisible hand of the market, but it is being directed in ways it is plain to see,” Rabinowitz said. “These 497 cases are attempts to evict, and other Palestinians living in Jaffa will soon find they can no longer afford to do so.”

At the center of the disputes are new developments in Jaffa, like the desirable Andromeda Hill development. Andromeda Hill, built in 1995 on land purchased from the Armenian Church, describes itself as “a virtual ‘city within a city’ surrounded by a wall and secured 24 hours a day.” Residents, second-homers, and holidaymakers enjoy the spa, health club and sports facilities.

A two-bedroom apartment costs $570,000 to buy, or $240 a night. A three-bedroom apartment with a sizable terrace can cost as much as $2 million. Some local Arab residents have filed a lawsuit claiming that they are entitled to move freely through the development, which contains a route from a main road to the beach, but have been unlawfully stopped from doing so by security guards.

The debates about the economics of Jewish-Arab relations in Jaffa go back decades, as the recent HRA report spells out. The HRA argues that the municipality’s Jaffa Renewal Plan, launched in the mid-1980s, was not intended to improve quality of life for existing residents. Rather, “the goal of the plan was to tempt Jewish residents to move into the area, thus neutralizing its Palestinian Arab character,” the report says.

The municipality did not respond to requests for comment.

The current dispute began with the letters sent to local residents from the government company, the content of which are in dispute. Amidar says that it did send notices, but they only proposed “legalizing” the living situation of squatters. HRA says that all 497 letters included eviction notices, 33 of which have been carried out so far.

“The current eviction orders are just part of an overall plan on the part of the authorities to Judaize Jaffa on the pretext of legal violations,” the report said.

Cohen says the eviction notices were not directed only at Arabs and that they spanned various neighborhoods.

“These claims about evictions and this report which supports the claims,” Cohen said, “are politically motivated and do not constitute a true account of the facts of what is happening in Jaffa, which is simply landlord-tenant affairs with no big plan to develop at the expense of householders or to change the population of Jaffa.”

Yossi Katz, who is a geography professor at Bar-Ilan University and an expert on conflicts over land in Israel, said that Jaffa has a special ability to touch a raw nerve among Israeli Arabs. “Jaffa is symbolic because it is a heavily Arab town right in central Israel,” he explained. “Tel Aviv symbolizes the current western culture of Israel, and serves as its economic center. Many Arabs see this and feel that Israel wants to fully control this whole area.

“But this is their subjective feeling, which does not mean that it necessarily corresponds to policy. In my understanding, what is going on there is a market process and only a market process.”