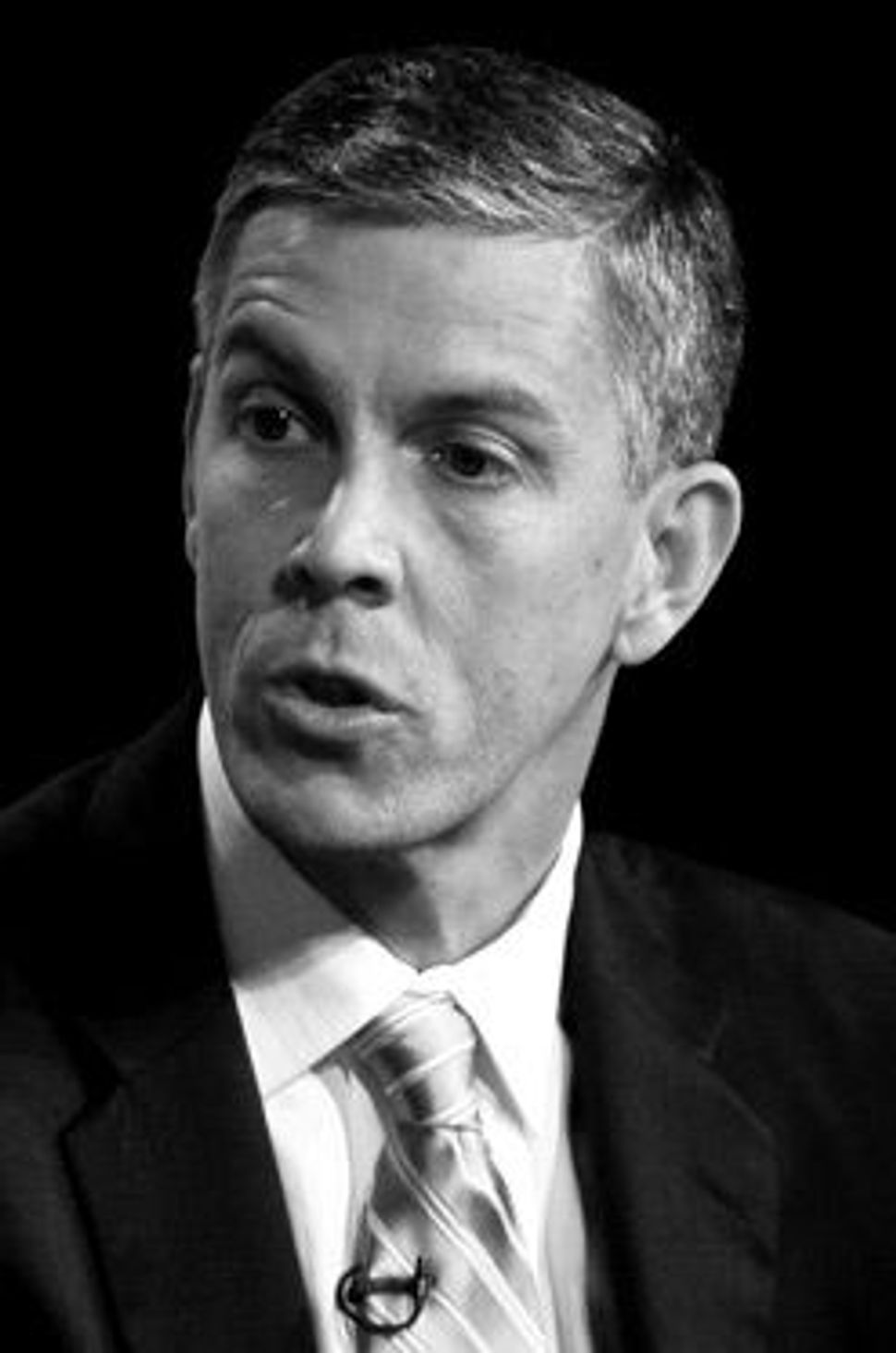 Persuaded?: After a conversation with Education Secretary Arne Duncan (above), a supporter of the amendment says he is ?more than cautiously optimistic.? Image by gETTY IMAgES

When the Civil Rights Act was passed in 1964, it was seen as the main vehicle for ending racial discrimination against African Americans. Now, two Jewish lawmakers are trying to amend the law, in order to have it include protection for Jewish students on college campuses. In the process, they are taking on a heavy historical question: Are the Jews of America part of a religion, or are they an ethnic group? 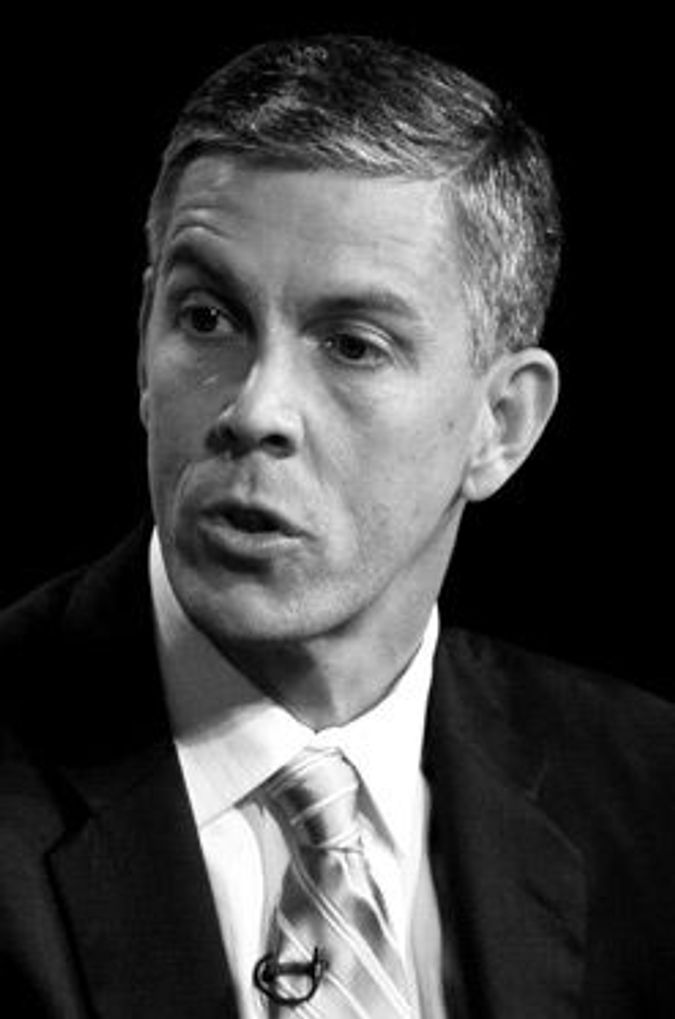 Persuaded?: After a conversation with Education Secretary Arne Duncan (above), a supporter of the amendment says he is ?more than cautiously optimistic.? Image by gETTY IMAgES

The proposed amendment, sponsored by Senator Arlen Specter of Pennsylvania and Rep. Brad Sherman of California, both Democrats, seeks to broaden the definitions of groups protected under Title VI of the Civil Rights Act, which prohibits discrimination in agencies receiving government funding. The lawmakers believe that the landmark legislation had left open a loophole in its formulation of Title VI protections. It prohibits discrimination based on “race, color, or national origin,” but does not mention religion.

“We need to close the loophole that allows students to be harassed and threatened because of their religion,” Specter said in a statement. He added that religious discrimination is already prohibited in other parts of the Civil Rights Act, including those relating to employment and housing.

The driving force behind this proposed legislation is the Zionist Organization of America, and the events triggering it took place at the University of California, Irvine, where tensions between Jewish and pro-Palestinian students have run high.

In 2004, after receiving complaints of harassment from Jewish students at the university, the ZOA made an official appeal to the Department of Education’s Office for Civil Rights, which is charged with enforcing Title VI. The group claimed that UC, Irvine’s leadership did not properly address these events and that Jewish students should enjoy the protection provided by Title VI, since the university receives government funds.

At the time, the prevailing interpretation of Title VI at the DOE was that it also covered religious groups that share ethnic characteristics. But while the investigation was under way, the OCR changed its position and adopted a narrower interpretation, one that recognizes discrimination based only on race, color or national origin.

“When someone shouts at Jewish students, ‘You’re baby killers,’ or, ‘You’re Nazis,’ this is intimidation that is not covered by the criminal law,” said Morton Klein, national president of the ZOA. “If someone turns to a black person and uses the N word, then it is covered. But if he calls a Jew ‘Nazi,’ it is not.”

Title VI of the Civil Rights Act does not infringe on free speech on campus, but it does require universities to maintain an environment free of discriminatory harassment. Use of racist language, for example, could be addressed by condemnation by campus leaders or through educational efforts.

In addition to incidents at UC, Irvine, ZOA also pointed to other campuses at which anti-Israel activity has left Jewish students feeling harassed. The Specter-Sherman bill mentions several incidents at other universities, as well, including the University of California’s Berkeley campus, where a student holding a pro-Israel sign was pushed and injured. At the University of North Dakota, anti-Semitic slurs were shouted at a Jewish student.

Amending the Civil Rights Act would also provide other religious groups with protection, which, according to sponsors of the new bill, is needed, as well. The sponsors detailed several cases of discrimination against Muslim, Sikh and Hindu students, including a case in which a Muslim student at the University of Illinois was beaten and had a swastika drawn on her locker, alongside the words “Die Muslims.” In another case, a Sikh seventh-grade student in New Jersey faced repeated taunts and harassment from students who called him “Osama.”

But when dealing with these cases, activists and lawmakers had to struggle with frequent changes in policy at the OCR. After turning down requests for investigation regarding the UC, Irvine, case, the OCR agreed in 2004 to broaden the definition to cover Jewish students, too. Then, with the new administration, the policy was reversed again to exclude Jewish students.

“The Civil Rights Act of 1964 was almost entirely about race,” explained Erwin Chemerinsky, founding Dean of the UC, Irvine law school. Chemerinsky added that even if amended, Title VI would do little to stop religious harassment, since it would only make universities liable in case of “deliberate indifference” and that, he said, “is a hard standard to meet.”

The issue was discussed in a recent phone conversation between Education Secretary Arne Duncan and Sherman, who later told the Forward that he is “more than cautiously optimistic” that the Department of Education will readopt the broader interpretation of Title VI. Sources within the DOE said that it would be releasing a new policy statement in the coming weeks.

Sherman also stressed, however, that even if the department revises its policy to include protection for Jewish students, he still intends to go ahead with the legislation in order to ensure that the interpretation of the Civil Rights Act on this issue is not subject to future administrative changes.

A spokesman for the DOE would not comment on the conversation between Sherman and Duncan. As for the proposed legislation, the spokesman said the department does not have a position on the bill.

Tackling the issue of anti-Jewish discrimination on campus also required the opening of a centuries-long debate over the definition of the “Jewish people.” For Jews to be protected under Title VI, assuming the Civil Rights Act is not amended, activists would have to make the case that Jews are members not of a religion, but rather of an ethnic group, or of a group that shares a national origin.

Sherman said the OCR failed to understand that “there is a Jewish people, not only a Jewish religion.” To prove the point, he argued that Jews can be atheists, while there is no such thing as a Catholic atheist. Furthermore, he said, Jews have a national origin, although thousands of years have passed since they actually shared this common national origin. “The word “Jew” is short for ‘Judean,’” Sherman explained.

In actuality, “Jew” is derived from “Judah,” a son of the biblical patriarch Jacob, and the leader of one of the Tribes of Israel. The tribe later gave its name to the southern portion of the Land of Israel.