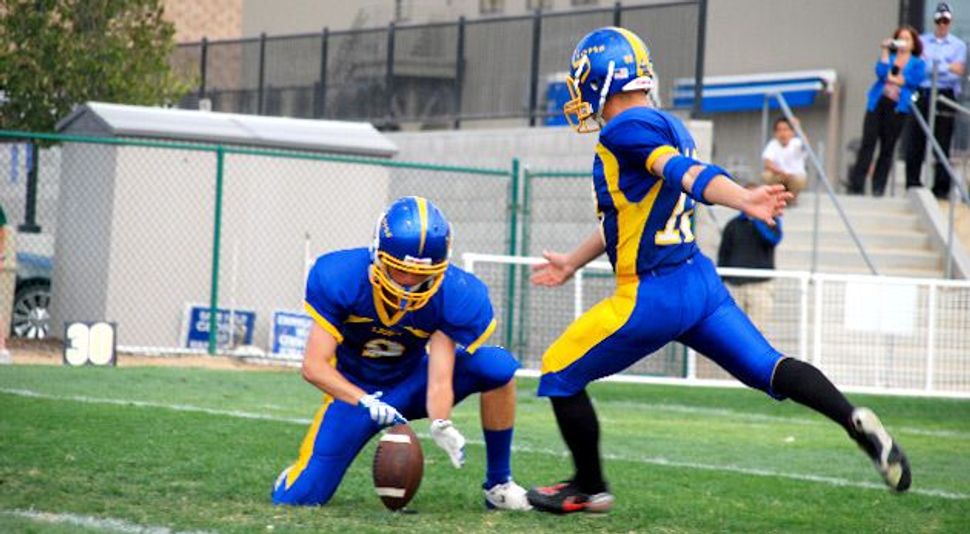 Aleph-Bet-Hike!: Despite its ups and downs, the footabll team of the San Diego Jewish Acadeny remains an interesting cultural phenomenon. Image by JUSTIN FARAJZ

San Diego Jewish Academy, which fields what it says is the nation’s only all-Jewish high school football team, is experiencing its share of tsuris.

Last season, its first year of playing 11 boys on a side, the academy won six games and lost two to make the playoffs and raise expectations. But in the offseason, its football coach was arrested on federal mail fraud charges and a new coach with big-name assistants took over. The team was pummeled in the season opener in September, but rebounded for a lopsided victory in their second outing this season.

Throughout the ups and downs, the team has continued to accrue cultural-interest points for reciting the Sh’Ma at midfield before each game, for principal Jeff Davis blowing the shofar after every touchdown and for the quarterback calling audibles in Hebrew so that the other team can’t understand them.

But the quick success last year has yielded headlines the football program could do without. After the Lions reached the playoffs, Coach John Milisitz was indicted by a federal grand jury for allegedly stealing $360,000 from a hospital in a fake-invoice scheme with his mother, Margie Milisitz, an employee of Baltimore Washington Medical Center. Margie Milisitz is accused of billing the hospital for jobs never done and then dumping the money into two of her son’s San Diego-based businesses. The two could face a lifetime in prison if convicted of mail fraud and interstate theft charges.

The school and Milisitz quietly cut ties. The Academy declined to comment further, and Milisitz reportedly returned to the East Coast. (The Forward tried to reach the family at Margie Milisitz’s listed phone number in Annapolis, Md., but it had been disconnected.)

Amid the brouhaha, SDJA athletic director Charlie Wund stepped in as head coach. He quickly reminded the players that they have been in charge of the team from the start, when the school played eight-man football. “For the seniors, this was their third head coach in four years,” he said. “Fortunately they’re used to the transition. This is part of the growing process. We have given them ownership and accountability for this program. They’ve always been the leaders of this program.”

The academy finished third last year in the Southern League, composed mostly of small parochial schools. San Diego Jewish recorded four shutouts. The Lions, as they are nicknamed, will not be sneaking up on any opponent this year.

“I figure it will come down to them and Calvin Christian for the league championship,” Calvary Christian Academy Coach Gene Rheam said at the start of the season. His team lost to San Diego Jewish, 38–0, in 2009. 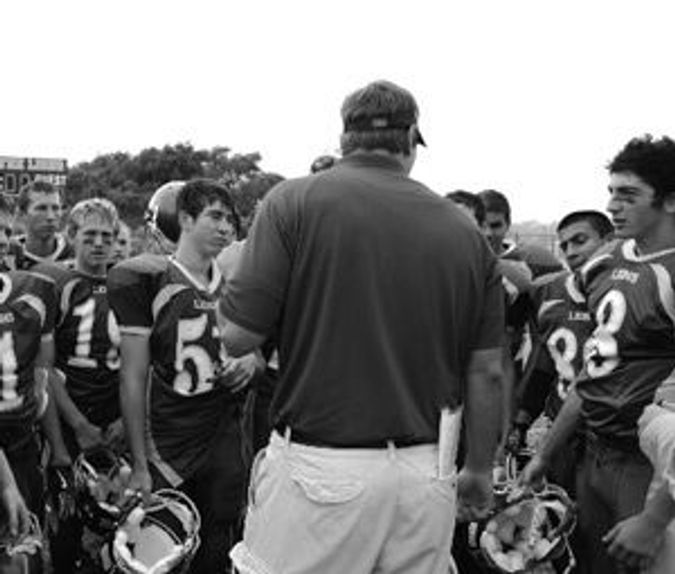 Lions On The Prowl: SDJA players gather around to hear a coach?s instructions. Senior lineman Ricky Pamensky said the team has ?made a name for ourselves.? Image by JUSTIN FARAJZ

The SDJA players sense their heightened visibility. “We are the small Jewish boys playing football, but we have made a name for ourselves,” senior lineman Ricky Pamensky said.

Pamensky is no shrimp at 6 feet, 240 pounds, and is perhaps emblematic of a growing emphasis on athletics at the 191-student high school. (The school, which enrolls students from kindergarten to 12th grade, has a total of 500 students, and educates in a “pluralistic Jewish environment,” according to its website.) Pamensky is a college prospect who has made a visit to Ohio University. Drew Ferris, one of the stars last season, is now on the roster for three-time national champion University of Florida as a long snapper. He is the first SDJA player to matriculate to a university in the Football Bowl Subdivision, college football’s top tier.

Sharf this season is expected to compensate for the graduation of quarterback Yosef Mizrachi, who passed for 1,141 yards, ran for 715 yards and scored 20 touchdowns. The new quarterback is sophomore Micah Weinstein.

The team stumbled in a 56–12 defeat to Tri-City Christian School in the first round of the playoffs last season, and a 35–3 defeat to Windsor High School, of North Vancouver, B.C., in its 2010 debut this fall. But September 28, the Lions routed Borrego Springs, 50–22, in its first Southern League game to even its record at 1–1 heading into the October 7 homecoming game against Julian High School.

Bill Stout, head coach of league rival Calvin Christian, said in September that Milisitiz’s abrupt parting should not get in the way of the academy’s success. “It will be an obstacle to overcome, as will replacing Mizrachi and six other seniors. However, I believe the school’s stable enrollment and the commitment of the administration to the football program will help the Lions survive these obstacles. I believe the Lions will again compete for the Southern League title.”

A surprising victory total last season perhaps stirred resentment. Some Lions said they heard occasional anti-Semitic remarks from opposing players and fans. The response orders from the academy are clear: Report the incident, and get on with the game. Let blocking and tackling do the talking.

Easier said than done when Sharf said he was called a kike. “At first I wanted to get mad and do something about it, but then I realized I wanted to be a better person for my team and calmed down about it,” he said. “We won that game, by the way.”

Team members said they pride themselves on playing smart — not a reach, given that their combined grade-point average was a reported 3.88 last season — and they have embraced the attention they’ve received from the Jewish community, which often rallies around its sports heroes. But Weinstein figures the support creates no extra pressure. The expectations are high enough.

“I believe with our athleticism,” he said, “that we can win the championship.”