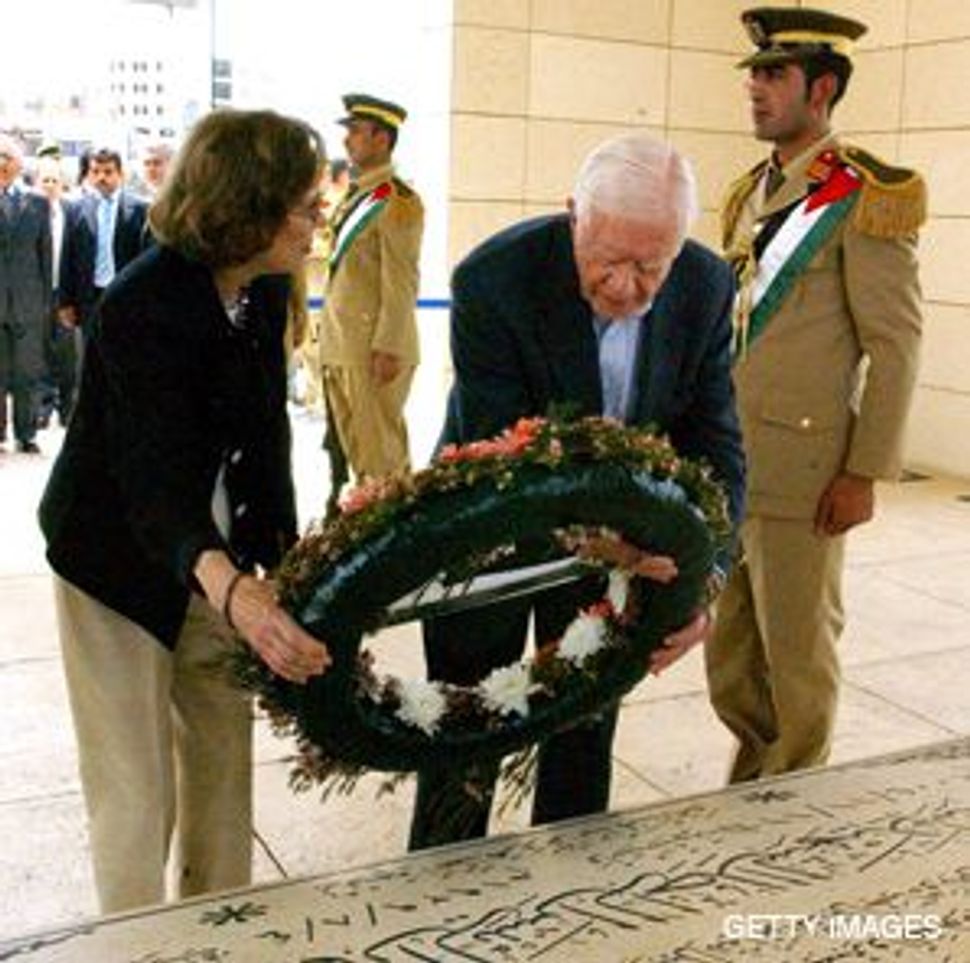 NOBEL SENTIMENTS: Jimmy Carter laid a wreath on Yasser Arafat?s tomb during his tour of the Middle East, which included a visit with Hamas leaders.

Former president Jimmy Carter’s controversial peace mission to the Middle East this week, which included high-profile visits with top leaders of the Islamist militant group Hamas, is causing some liberal observers to worry that the elder statesman may create headaches for the party at its nominating convention in Denver. 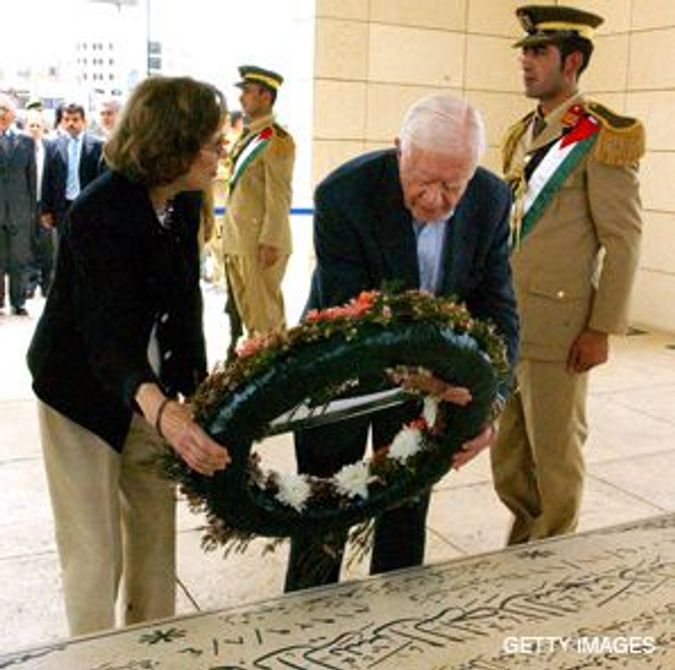 NOBEL SENTIMENTS: Jimmy Carter laid a wreath on Yasser Arafat?s tomb during his tour of the Middle East, which included a visit with Hamas leaders.

With the presidential campaign raising the stakes for Democrats this year, several party insiders told the Forward that finding the right role for the former president — a Nobel laureate who brokered the first Israeli-Arab peace accord three decades ago — at the August parley would likely require delicate maneuvering.

“I would say publicly dissing a former president of your party is a tricky and somewhat unpleasant thing to do,” said one Democratic campaign official. “My guess is if it came down to it, people would try to give him the respect that’s appropriate to a former president, without giving him a platform to say things that are difficult for the party or the nominee.”

The current dust-up is not the first time that Carter has complicated the political fortunes of fellow Democrats with his outspoken political activism. Two years ago, on the eve of mid-term elections in which his party regained control of Congress, the former president prepared to publish a controversial book, titled “Palestine: Peace Not Apartheid,” which placed the bulk of the blame on Israel for its continuing conflict with the Palestinians. The book’s release provided considerable fodder to the GOP — the Republican Jewish Coalition placed advertisements featuring Carter in Jewish newspapers across the country — and consternation for the Democratic leaders, who publicly condemned the book.

“The Republicans would love to see Carter at the convention giving a speech,” said veteran Democratic political consultant Hank Sheinkopf. “If he has a role at the convention, you can rest assured that it will wind up on film, in a television commercial or on YouTube, as a weapon against Democrats.”

According to Ed Kilgore, who has served as a speechwriter at the past five Democratic conventions, Carter has been known to display his independent streak at the party gathering.

“In 2004, he was one of just two people who were really unscripted — the other one being Al Sharpton,” said Kilgore, who serves as managing editor of the online political journal The Democratic Strategist. “You can put words on the teleprompter, and if somebody chooses not to use them, there’s not much you can do about it, but some of the Kerry folks were a little annoyed that he went off script.”

If this year’s convention includes a dramatic face-off between Obama and Clinton, the role of speakers such as Carter could receive more attention than usual, according to Costas Panagopoulos, an assistant professor of political science at Fordham University and head of the school’s Center for Electoral Politics and Democracy. As a rule, he added, anywhere from 10 to 25% of the voting public makes up its mind about who to vote for in the general election based on convention coverage.

The concerns about Carter’s role in the election came to the fore in recent days in reaction to his much-publicized embrace of a senior Hamas official during an April 15 visit to the West Bank, and his preparations to travel to Syria to meet with Hamas’s blacklisted leader in exile, Khaled Meshal.

The prospect of Carter’s meeting drew a flurry of opposition in Washington, as a coalition of 50 members of Congress, headed by Democratic Rep. Shelley Berkeley of Nevada and Republican Rep. Mark Kirk of Illinois, sent a letter to the former president denouncing the visit, while Michigan Republican Joe Knollenberg introduced legislation prohibiting federal funds from going to the Carter Center.

The RJC and the presumptive Republican nominee, Sen. John McCain of Arizona, called on Sen. Barack Obama to reject a possible vote from Carter, a superdelegate, at the Democratic convention in August. Democratic leaders, meanwhile, rushed to make their own denouncements of the visit, including Rep. Howard Berman, the new chairman of the House Foreign Affairs Committee, as well both Senators Hillary Clinton and Obama, who met with Jewish leaders in Philadelphia less than a week before the Democratic primary in Pennsylvania.

“Carter’s views are antithetical to those in the mainstream of the Democratic party,” said Steve Grossman, a former chairman of the Democratic National Committee who is backing Hillary Clinton. “He does not speak for either [Clinton or Obama] in any shape or form, and I think there’s pretty much unanimity on that point.”

While it is impossible to tell what role Carter might play at this summer’s convention — the tightly scripted affairs are usually directed by the nominee, and speakers are often set as late as the week before — it is not a given that Carter would, in fact, speak. In 1996, the former president stayed home, reportedly due to tensions with the Clintons, while in 2000, he was honored with a video tribute at the convention and did not have a speaking role.

In the view of Panagopoulos Carter’s impact on the convention will depend, in part, on whether he is included in the network television coverage, which has seen drastic cutbacks in recent years as the conventions of both parties have turned into predictable “pep rallies.”

Whatever Carter’s role at the August event, the recent political tumult over his Middle East mission has proved particularly uncomfortable for Obama, who has taken flak in some Jewish quarters for supporting direct, unconditional engagement with the leaders of Iran and other rogue states. Carter has strongly hinted that he will support Obama.

At his meeting with Jewish leaders in Philadelphia, Obama defended his belief that there is a difference between meeting with leaders of Hamas and engaging directly with the Iranian regime.

“Hamas is not a state,” Obama told dozens of rabbis and communal officials gathered at Philadelphia’s Rodeph Shalom synagogue on April 16. “My interest is meeting with Iran is practical; it is not based on my assessment of who they are or my judgment about their values, but rather it is an assessment in terms of how we can best achieve our ultimate goal, which is an Iran not threatening its neighbors, not threatening Israel.”

Later in the day, at a debate in Philadelphia televised by ABC News, Obama and Clinton were asked if the U.S. should “treat an Iranian attack on Israel as if it were an attack on the United States.”

“An attack on Israel is an attack on our strongest ally,” Obama responded, after first stressing the need to “directly engage” with Tehran in order to prevent the regime from gaining nuclear weapons. He added that an attack on Israel would be “unacceptable,” prompting the U.S. to take “appropriate action.”

Clinton also stressed the need for diplomatic engagement of Iran, but also focused on the need for to create an “umbrella of deterrence” for Israel and other allies in the region.

“We’ve got to deter other countries from feeling that they have to acquire nuclear weapons,” Clinton said. She added, “We will provide a deterrent backup and we will let the Iranians know that yes, an attack on Israel would trigger massive retaliation, but so would an attack on those countries that are willing to go under this security umbrella and forswear their own nuclear ambitions.”