How Will Jews React to ‘Budrus’? 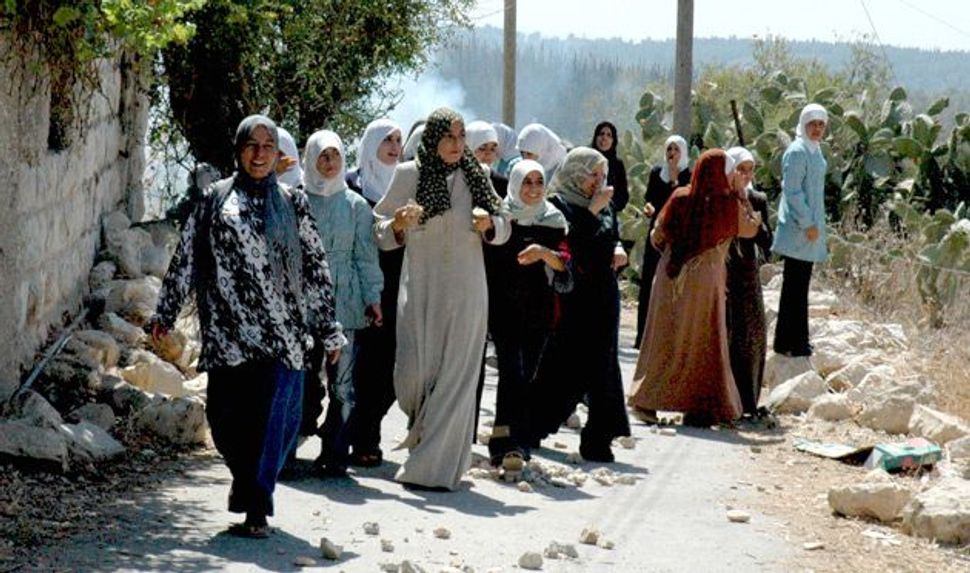 On the March: Palestinian women protest the construction of the separation barrier near their town, as depicted in ?Budrus,? a film opening in cities across the U.S. this month. Image by COURTESY OF JUST VISION

Protesters in the Palestinian town of Budrus were growing frustrated. After months of nonviolently demonstrating against the Israeli separation barrier being built through their olive groves, the demonstrators faced increased force from Israeli border police who were firing tear gas and swinging batons. Young Palestinians began tossing rocks at the soldiers despite pleas from protest organizers, and Israeli forces occupied the town, sending live ammunition down the narrow streets.

These scenes, which took place in the West Bank six years ago, are now coming to a mass audience in America in “Budrus,” a new documentary premiering in New York in October.

Rabbi David Saperstein, director of the Religious Action Center of Reform Judaism, who has yet to see the film, views the situation the film depicts as part of a broader trend that he supports — and he thinks American Jews will see it that way, as well.

“You can’t follow the Israeli-Palestinian conflict generally and not be aware that there seems to be growth in the assertiveness and the extent of nonviolent protest, and I think it’s a constructive development,” he said.

Not every Jewish communal official agrees. The American Jewish Committee’s associate director of communications, Ben Cohen, who has not yet seen the film, predicted that American Jewish reaction to the movie will be skeptical. “Most people are not going to assume that because the soldier is armed and the activist is not [in one frame], all the violence is on one side,” he said.

The documentary, which has won plaudits on the film festival circuit, depicts a mostly nonviolent series of protests against the separation barrier that Israel has set in place between its citizens and West Bank Palestinians. The long trail of fences and walls was built in response to the second intifada, an extended campaign of suicide bombings against civilians by Palestinian terrorist groups. But the ostensible security barrier often deviates from the internationally recognized Green Line that separates Israel from the occupied territory to go deep into the West Bank, taking in acres of Palestinian land, and sometimes separating villagers from their own fields, groves and farms.

The film depicts one village’s protest against this expropriation in 2003 and 2004 by a coalition that included members of Fatah and Hamas, as well as Israeli Jews and international supporters. Due to their protests, the route of the barrier around Budrus was eventually changed to hew closer to the pre-1967 borders. 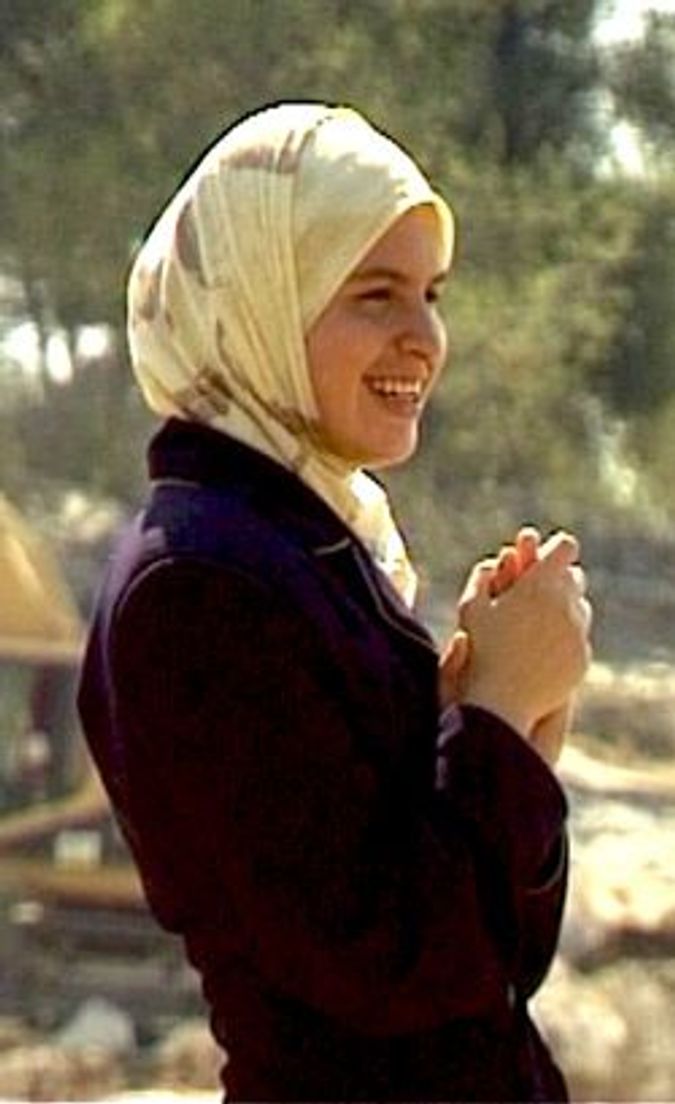 Protest Leader: Iltezam Morrar features prominently in the film as an unlikedly leader of the protests against the barrier. Image by just vision

“This film came out of a constant question that we got: ‘Where’s the Palestinian Gandhi?’” said Ronit Avni, founder and executive director of the American not-for-profit organization Just Vision, which produced the film. Avni said that audiences told her: “If Palestinians adopted nonviolence, there would be peace. That is the assumption that is dominant in the Israeli and the American Jewish public.”

Since 2004, nonviolent resistance against the separation barrier has grown far beyond Budrus. Similar movements are active in about 10 Palestinian towns and villages, including high-profile instances in Bi’lin and Ni’lin.

As in Budrus, the army has routinely broken up the protests by using tear gas canisters and rubber bullets, and sometimes, live fire. On the Palestinian side, cases of stone throwing have occurred. Protesters have been injured and killed in these demonstrations. The Israeli army says that more than 100 soldiers have been hurt, some seriously. Still, few question these demonstrations represent a fundamental break with the tactics of the recent past.

Avni’s group, which advocates nonviolent cooperative efforts between Israelis and Palestinians toward resolutions of the Israeli-Palestinian conflict, created the documentary mostly from footage taken by activists and observers during the events in Budrus. Coupled with contemporary interviews, the footage depicts the efforts of Ayed Morrar, a local activist, to organize protests against the separation barrier. His daughter, Iltezam, a teenager at the time, plays an important role in the protests and in the film, at one point throwing her body into a pit being dug by an Israeli bulldozer, effectively halting work on the barrier.

The film graphically depicts the sometimes aggressive response of the Israeli security forces tasked with protecting the demolition crews and controlling the crowds at Budrus. A female Israeli border patrol officer, seen in the film hitting Palestinian women with a baton, narrates some of the footage.

“Part of what this unarmed resistance is about…[is], you are trying to hold up a mirror; you shame the wrongdoers into changing their behavior,” said the Middle East Task Force at the New America Foundation’s senior research fellow and co-director Daniel Levy, who has participated on panels following screenings of the film. “It’s easy to say all the inequities of the occupation are because of Palestinian violence. As soon as you don’t have that place to go to, the idea is, you have to look deeper inside yourself.”

But Cohen said that the Palestinian nonviolent strategy will not win sympathy from American Jews. He said that the participation of local Hamas leaders in the protests invalidated them because of that group’s role in sponsoring numerous terrorist attacks.

“If I see Hamas participate in a demonstration, it doesn’t have to end in a specific terror act for me to underline the point that Hamas’s presence belies the claim of nonviolence, because Hamas is based on violence,” he said.

He rejected the view that the proximate goal of a particular rally mattered more than the broader ideology of the participants.

Supporters of “Budrus” say that this film is bound to spark debate among American Jewish audiences. Indeed, a Jewish group is among its funders.

At a panel discussion about “Budrus” that followed a screening at the San Francisco Jewish Film Festival earlier this year, there was “this incredibly civil conversation,” said Elise Bernhardt, executive director of the Foundation for Jewish Culture, which funded the film through its Lynn and Jules Kroll Fund for Jewish Documentary Film.

“To my mind, whether I agree with the perspective, it doesn’t matter, because I think what [the] filmmakers are after is to get a conversation going about what are the options here to solve this problem,” Bernhardt said.

Budrus was not the first town to adopt nonviolent tactics against the separation barrier. But according to Mohammed al-Khateeb, a leader of the protests in Bi’lin and of a committee that coordinates protest activities around the West Bank, Budrus’s success in changing the route of the barrier was influential.

“If we use the violence it will be confused, and the Israelis will use the military reason and the military excuse and the security excuse to attack and to strengthen their occupation under the security regime,” Khateeb said.

The film opened in theaters in Britain at the end of September. After its U.S. premiere in New York in early October, “Budrus” is scheduled to appear at theaters in New York, Boston, Washington, Los Angeles and Denver.

How Will Jews React to ‘Budrus’?