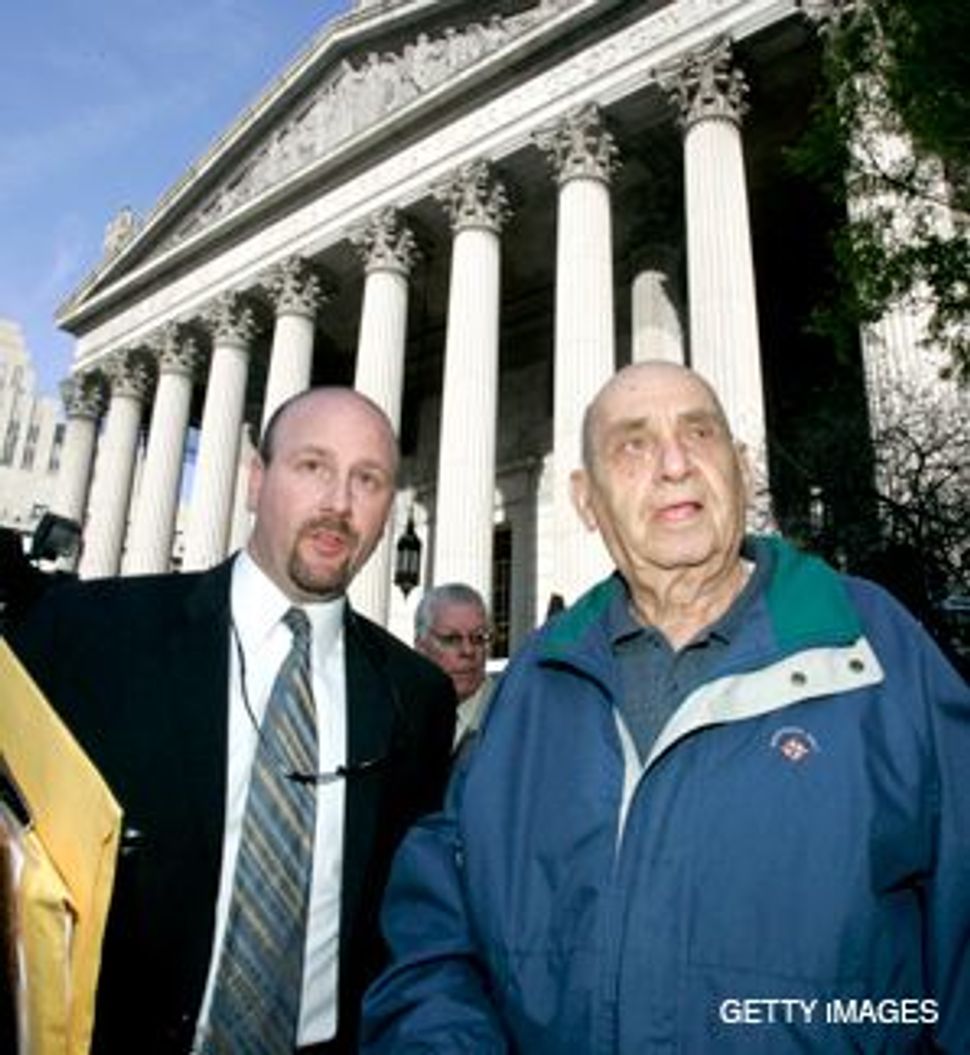 INDICTED: Ben-Ami Kadish (right) is escorted out of federal court in New York, where the 84 year old was charged April 22 with spying for Israel from 1979 to 1985

Washington — The arrest this past week of a retired Army engineer is refocusing attention on claims in Washington that Jonathan Pollard was not the only Israeli spy planted in the American military. Ben-Ami Kadish, 84, was released on bond April 22 and is back at his home in The Ponds retirement community in Monroe Township, N.J. 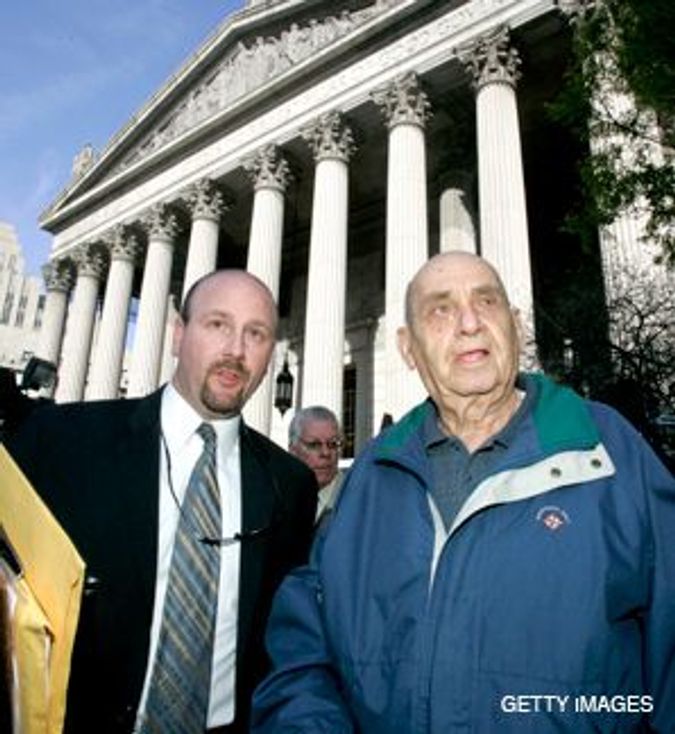 INDICTED: Ben-Ami Kadish (right) is escorted out of federal court in New York, where the 84 year old was charged April 22 with spying for Israel from 1979 to 1985

The indictment includes four counts of conspiracy relating to the passing of classified information to an Israeli official in New York between 1979 and 1985 and makes direct reference to the case of Pollard, a former naval intelligence analyst who was convicted of espionage in 1986. According to the indictment, Pollard and Kadish shared the same operator: an Israeli official referred to in the indictment as “co-conspirator-1 (CC-1)” and since named in the press as Yosef Yagur.

Kadish’s arrest, more than two decades after his alleged espionage acts took place, appears to show that ever after Pollard’s arrest in 1985, suspicion remained in Washington about Israeli espionage against the United States. American officials involved in military and intelligence ties between the two countries told the Forward that rumors of an active Israeli spy network, or of a senior Israeli agent known as “Mega,” still hold currency within the American intelligence and counter-espionage communities.

According to Joseph diGenova, the federal prosecutor who led the investigation that landed Pollard in prison, investigators were not completely convinced that Israeli espionage in the United States ceased after the navy analyst was put away.

“The Israelis, of course, lied to us,” diGenova told The Associated Press on April 23. “They said there were no other spies and they had destroyed all the documents they got at the time.” The former federal prosecutor added that Yagur knew specifically which information he hoped to obtain from Pollard and Kadish.

Israeli and American officials have said in the past that they believe it is this concern that led to the opening of the investigation into the alleged transfer of classified information by then-employees of the American Israel Public Affairs Committee, a case that is currently in separate court proceedings. It also has been stated in Pentagon documents that the Pollard affair and other incidents involving alleged Israeli espionage are the

reason for denying security clearance to American citizens with close ties to Israel.

According to the indictment, filed April 22 in a New York federal court, the motive behind Kadish’s actions was his desire to assist with what he regarded as Israel’s security needs.

Kadish has been described in the Israeli press by his friends and neighbors as being an avid supporter of Israel and an active member of his local Jewish community.

Israeli officials in Washington and New York declined to comment on the allegations.

The official indictment, however, does not provide an answer to one of the main questions surrounding Kadish’s arrest: that of its timing. Israel was not aware of an ongoing investigation into its past actions in the United States and was not asked in recent years to provide information regarding Kadish or the Pollard case.

On April 23, Newsweek magazine quoted an unnamed intelligence official saying that what triggered the investigation was a “super-secret intelligence monitoring” related to the ongoing examination of issues concerning the Pollard affair.

The State Department, while emphasizing that the alleged espionage took place more than two decades ago, drew a direct line between Kadish and Pollard.

“You know, 20-plus years ago, during the Pollard case, we noted that this was not the kind of behavior we would expect from friends and allies, and that would remain the case today,” said a State Department deputy spokesman, Tom Casey, on April 22.

Kadish worked as a mechanical engineer in an Army armament center in Dover, N.J.. According to the indictment, he repeatedly “borrowed” classified documents from the base and brought them to his home, where his Israeli operator photographed them in Kadish’s basement. These documents included information about nuclear weapons, F-15 warplanes and Patriot missile defense systems.

It was allegedly Yagur who requested these specific documents.

Kadish did not get paid for his services, according to the indictment, and received only “small gifts” and occasional dinners at a restaurant in the Riverdale section of the Bronx.

Yagur was called back to Israel immediately after Pollard’s arrest and has not returned to the United States since. He refused to speak with the press this past week.

After the Pollard case broke, Israel made repeated assurances to the United States that it would never engage in any espionage activity against America, and the highest levels of subsequent Israeli governments reiterated these pledges. According to the indictment, most of the alleged spying by Kadish took place at the same time that Pollard was providing Israel with secret intelligence documents and before assurances were first provided by Israel.

Foreign Ministry spokesman Arye Mekel said April 22 that “since 1985 there have been clear orders from Israel’s prime ministers not to conduct these kinds of activities.”

An Israeli diplomat at the embassy in Washington was called to the State Department and presented with the information about the Kadish investigation shortly before the indictment was made public.

The indictment details phone conversations as recent as last month between Kadish and his Israeli handler. In one conversation, the Israeli former official instructed Kadish to lie to FBI investigators about the information he passed to his Israeli operator.

“What happened 25 years ago? You didn’t remember anything,” the Israeli handler said to Kadish in the phone conversation, which was tapped by the FBI.