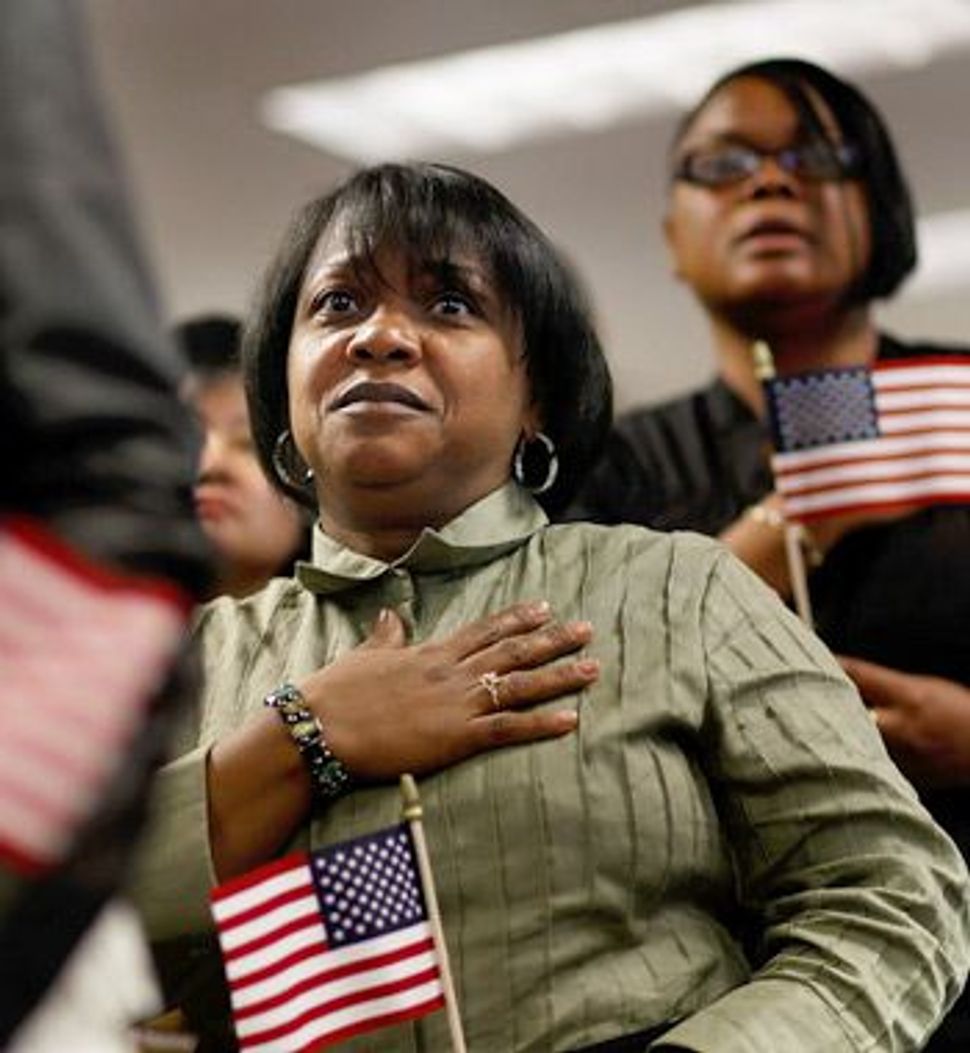 Pledging Allegiance: Maria Elena Santana Acevedo, originally from the Dominican Republic, recites the oath as she becomes an American citizen on May 14 in New York City. In Israel, the Cabinet has approved a highly controversial loyalty oath for non-Jewish immigrants. Image by GETTY IMAGES

The American “oath of allegiance” demands that a new citizen promise to “bear arms on behalf of the United States” and ends with “so help me God.” New Canadians have to swear “to be faithful and bear true allegiance to Her Majesty Queen Elizabeth II, Queen of Canada, Her Heirs and Successors.” Norwegian immigrants have to pledge to “support democracy and human rights.”

Most Western democracies administer an oath or pledge as part of becoming a citizen. But Israel’s decision to change its oath — a move approved by the Cabinet on October 10 — has proved particularly controversial. Opponents have hurled accusations of racism and discrimination against Avigdor Lieberman, Israel’s foreign minister, who had made amending the citizenship oath a central part of the platform of his party, Yisrael Beiteinu. 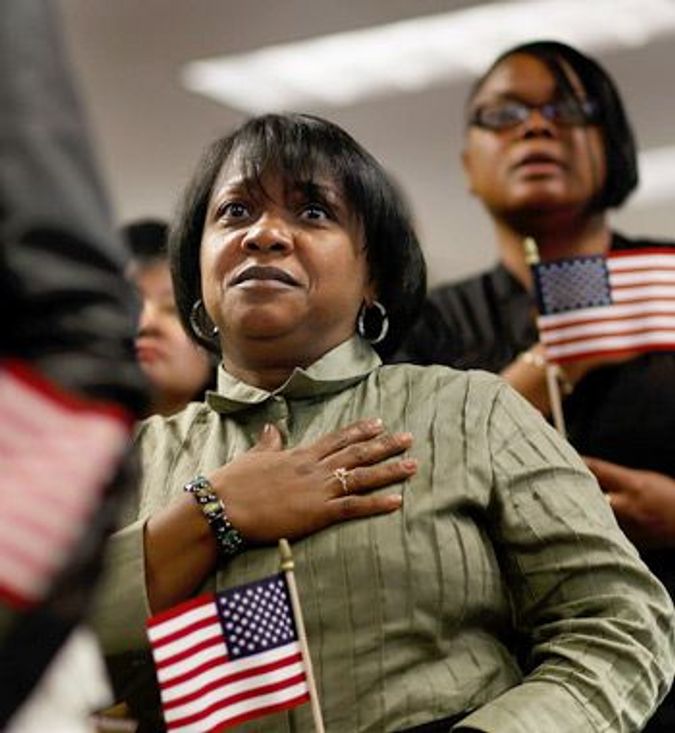 Pledging Allegiance: Maria Elena Santana Acevedo, originally from the Dominican Republic, recites the oath as she becomes an American citizen on May 14 in New York City. In Israel, the Cabinet has approved a highly controversial loyalty oath for non-Jewish immigrants. Image by GETTY IMAGES

But what exactly makes his proposal, which is headed for a vote and likely approval by the Knesset, such a deviation from other national expressions of allegiance? The main difference, according to experts, has to do with how the new wordings would assert the religious identity of the state. Though there is nothing new about the notion of Israel as a “Jewish state,” the idea of forcing non-Jews to utter these words as a condition of citizenship is discomfiting many Israelis on both the left and right.

The current oath came out of the 1952 Citizenship Law, which asked naturalized citizens who did not immigrate to Israel under the Law of Return to declare, “I will be a loyal national of the State of Israel.” Unlike the United States, there is no ceremony that accompanies this oath-taking.

The change, which was approved by the Cabinet by a 22–8 vote, was proposed by Justice Minister Ya’akov Ne’eman and strongly backed by Lieberman. It adds the words “as a Jewish and democratic state, and I promise to honor the laws of the state.”

The significance of the change is largely symbolic. Since Jews do not take this oath upon becoming Israeli citizens, it would apply mostly to non-Jews from abroad who marry Arab citizens of Israel.

Critics are bothered, however, by the exclusionary implications of the new wording, which threatens to further alienate Arab citizens of Israel. Ironically, some of these critics point out, it was 10 years ago, in October 2000, that 12 Arab Israelis were killed in a demonstration at the beginning of the second intifada. This led to the Or Commission, a state inquiry, which concluded that the government needed to “erase the tarnish of discrimination against the Arab citizens” and called for steps to establish “real equality” between Jewish and Arab citizens, who make up nearly 20% of the Israeli populace.

“The issue is not the oath per se, but what the oath demands — a pledge of loyalty to Israel as a Jewish state,” Dov Waxman, a political science professor at Baruch College and the City University of New York, wrote in an e-mail to the Forward. “This is controversial because many Arab citizens of Israel believe that as long as Israel defines itself in this manner, they are doomed to remain effectively second-class citizens.”

“They also fear that what is now being asked of new (non-Jewish) immigrants will soon be asked of them, too,” added Waxman, who has just completed a book on the Arab minority in Israel. “This is a very understandable concern.”

Indeed, in the lead-up to the October 10 Cabinet vote, both Prime Minister Benjamin Netanyahu and Ehud Barak, leader of the Labor Party and current defense minister, offered additional language that would affirm the commitment to minority rights that is enshrined in Israel’s Declaration of Independence.

In July, Netanyahu presented an alternative that defined Israel as “the nation state of the Jewish people which grants full equality to all of its citizens.”

During the more recent debate, Barak offered a version that would specifically make reference to the declaration: “I declare that I will be a citizen loyal to the State of Israel as a Jewish and democratic state, in the spirit of the Declaration of Independence, and I am committed to honoring the laws of the state.”

Barak’s version, according to scholars of nationalism, would have tweaked the original, but at least stayed in line with the oaths of other countries.

What causes the Ne’eman-Lieberman version to deviate most from these other oaths and pledges is the presence of the word “Jewish.”

Although oaths taken to the Queen of England, who is the nominal head of the Church of England, certainly have a religious tone to them, Israel would be unique in singling out a religious identity for the state.

Some defenders of the new wording argue that the inclusion of the word “Jewish” should not be seen as a religious designation. “While many like to constrict the term as merely referring to a religious belief, its meaning is far greater,” wrote Danny Ayalon, the deputy foreign minister, in a Jerusalem Post column defending the new oath. “To be Jewish is to be part of a nation, civilization, culture and people. I frequently tell visiting dignitaries who are similarly uncertain that Jews are to Israel as the Chinese are to China and the French are to France.”

The other aspect that makes this oath unique and gives it, in the eyes of its critics, a discriminatory taint is the fact that it would have to be recited by only non-Jews. Though this has always been the case for the Israeli oath of allegiance, the proposed addition of the words “Jewish and democratic” have made many people uncomfortable.

On the day following the Cabinet’s approval of the new language, the Anti-Defamation League released a statement asking that the oath be applied to all new immigrants “in the spirit of Israel’s founding principles of equality.”

Perhaps the most strident opposition to the new oath came from Dan Meridor, a Likud member and the minister of intelligence and atomic energy. Speaking on Israel’s Army radio, Meridor wondered whether a new oath was needed at all.

“We are a Jewish state; we are the state for the Jewish people. We wrote this in our basic laws,” Meridor said. “This is a known and a given fact — that is how we were established by the United Nations. Do we have to continue repeating these words in relation to every context, when we have already won the historical battle?”