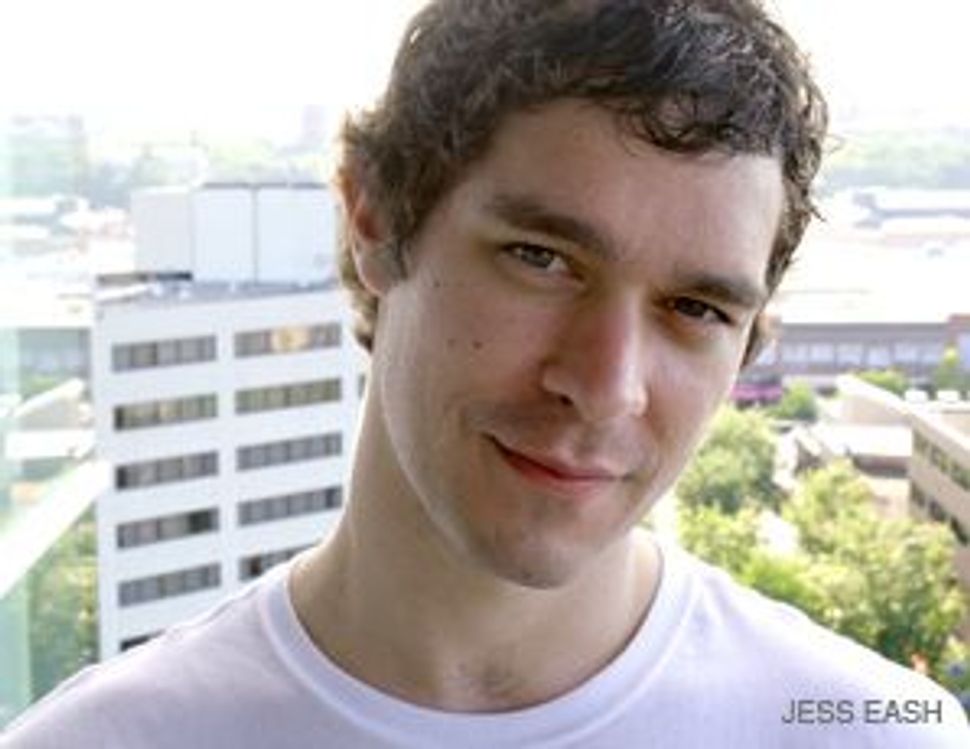 FUSION: Matt Bar writes raps based on biblical tales. His new album will be released in July.

It’s Saturday night in Jerusalem’s Talbieh neighborhood, and a crowd of 50 is gathered to hear Matt Bar rap about the Bible. The lanky Iowa City native has achieved a kind of celebrity among young Anglos in Jerusalem with his Bible Raps project, a phenomenon he’s hoping to repeat this summer when he travels to Jewish summer camps across America.

FUSION: Matt Bar writes raps based on biblical tales. His new album will be released in July.

If someone had told Bar, 28, that his future would be in writing rhymes about Torah stories, he probably would have called the person crazy. As a kid, he pleaded atheism as a way to get out of Hebrew school. Now, he waxes poetic about his interest in prayer.

Bar manages to string together words like “neophyte” with “dat’s dope.” He counts Eminem and Rashi among his most powerful influences.  Nietzsche is “the greatest poet of ideas,” and gangsta rapper Lil’ Wayne is “the most compelling character in hip hop today.” Of course, these unlikely pairings — Hebrew meets hip hop — are precisely why Bar is so appealing.

It seems, at least consciously, that the rapping came first. Walking down the street when he was 4 or 5, he’d suddenly break out dancing, making up little ditties in time with his moves. His parents — a pediatrician and an occupational therapist — had no idea where their son picked it up. Nor, really, does Bar.

When asked when his interest in music and rap began, Bar admitted that he can’t point to a specific moment.

“I’ve just always had a deep fascination with black culture,” he said.

Bar recalled his obsession, in 1991, with Tupac Shakur’s debut song, “Brenda’s Got a Baby.”

“I’d sit just waiting for that video,” he said. “Nothing compelled me on the TV like that video. I didn’t know why.”

It has something to do with “realness” — the fact that black culture is specific, that it has its own language. And while Bar doesn’t defend the gangsta rap culture that revolves around, as he puts it, “booty and boobie videos,” he identifies strongly with the language of hip hop.

“Rap, to me, is a way of organizing language, as iambic pentameter was, as haiku was… the very same truth said in prose, said in rap, is going to hook somewhere else in the consciousness,” he said.

But the fusion between his love of rap and his Jewishness is fairly new. Trying to make it in New York as a folk rapper — his particular blend of folk music and rap — Bar paid the bills by teaching sixth graders at Temple Sholom in Greenwich, Conn. If his students behaved, he’d freestyle about the Bible during the last five minutes of class.

“Every other Sunday, I’d write a new rap,” Bar said. “The disposition of my class changed 180 degrees. They started memorizing the choruses and singing them in the hallways.”

Unlike most other educational music aimed at Jewish youth, Bar’s raps don’t simplify. His song about Cain and Abel packs a lot of content into fast-paced verses:

I go to work, I teach about Cain and Abel, some say it really happened some say it’s just a fable, it doesn’t matter to me, there’s something sadder to see, kicked out the garden, no pardon, yeah Cain and Abel are startin’, to live in the real world giving gifts to the Lord, poor Cain’s is rejected but he don’t know what for, mad at the Lord, he takes it out on Abel, with that murder, murder Mo murder — Cain is willing and able. The blood started flowing till it wetted up the ground, the ground started moaning so the Lord came round.

For the past year, Bar’s been hard at work on his first Bible-rap album (his fifth CD), due out in July. He arrived in Jerusalem last June to participate in the flagship summer of the PresenTense Institute for Creative Zionism, an incubator for young innovators. Though he came for the free room and board, he decided to stay well past August. He credits PICZ with “making this whole thing possible… they were like, ‘We’re going to help grind out the path, so that you can continue walking, however long you’re gonna take it.’”

Life in Israel is markedly different from life in New York. But it’s a change Bar embraces.

“I like Israel, man. I like talking about Judaism,” he said with a laugh. “And there’s a lot more people to do that with here than in the company I usually keep.”

And he continues to revel in writing raps.

“It’s nice to write on behalf of something a little bigger than yourself, that you believe in, you know? It’s a good thing.”

Bari Weiss, a writer living in Jerusalem, is a 2007-8 Dorot fellow.