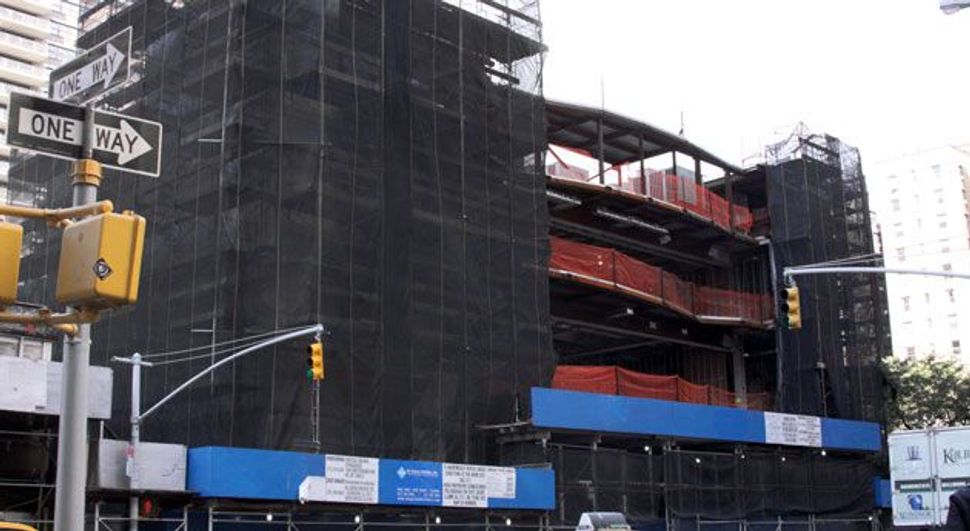 Four decades after Lincoln Square Synagogue moved into its rounded building near Lincoln Center, the iconic Modern Orthodox congregation on Manhattan’s Upper West Side is facing an uncertain future, following the decision to halt construction on its new building and the resignation of its president.

LSS, the subject of public attention this year after former member Elena Kagan was nominated to the U.S. Supreme Court, has been building a new home a block away from its current location. The project broke ground in 2007 and was expected to be finished 12 to 18 months later.

Three years on, though, the project has yet to be completed, and on October 11 the synagogue announced on its website that construction was being suspended pending the naming of a venture partner or major donor.

The public announcements followed several meetings among synagogue leaders and, later, the synagogue’s members, at which everyone mulled the predicament: Simply put, there is not enough money to proceed.

LSS is just one of several Orthodox institutions in New York that have faced similar challenges in recent years. The Ramaz School stopped construction on a planned building project, and Young Israel of New Rochelle, in nearby Westchester County, underestimated the costs of its new building, delaying its opening.

At LSS, some congregants who asked not to be identified expressed concern that the recent upheaval and financial woes marked the beginning of the end for the storied synagogue. But Shaul Robinson, the congregation’s senior rabbi, says LSS has no plans to close. “We have a steep hill to climb, but we’re committed to it,” he said. “I have no doubt that it will continue to exist.”

LSS has attracted national attention ever since the mid-1960s, when Rabbi Shlomo Riskin — then a charismatic young graduate of Yeshiva University — inspired its then-Conservative congregants to greater levels of observance. Riskin, who could not be reached for comment, brought music, social events, lectures and adult-learning programs to the congregation, thus attracting many new members. The synagogue eventually reoriented itself as a Modern Orthodox community.

“The Lincoln Square Synagogue was, through the 1980s, the cutting-edge synagogue in the Orthodox world and, by extension, in the religious world — in women, singles, outreach to the unaffiliated,” said Jerome Chanes, a longtime member of LSS and a Forward contributing editor.

In 1983, Riskin left LSS and immigrated to Israel to become chief rabbi of Efrat, a large settlement in the Israeli occupied West Bank. The congregation then went through a succession of rabbis — including one who left to start a breakaway synagogue, also on the Upper West Side. But since 2005 the congregation has been under the leadership of Robinson, a Scottish rabbi who studied under Riskin.

Several years ago, the synagogue opted to build a new structure nearby, and orchestrated a land swap with developer American Continental Properties, owner of the Lincoln Towers complex. The deal yielded about $18.5 million for the synagogue, according to several members who were privy to the information.

Following the land swap, LSS entered into an arrangement by which it now rents its original space from the developer. But the contract stipulates that if ACP decides to build on the site that currently houses the synagogue, the congregation will have to find and finance an interim space, since the new building has not been completed.

A capital campaign to fund construction has raised about $7 million so far. But at a recent meeting, the synagogue leadership announced that the costs had grown tremendously. This left a shortfall of about $17 million, several members told the Forward.

“We’re still looking into what the final cost will be,” said Gloria Kestenbaum, a synagogue member who handles some of its communications. She added that financial information is confidential.

“It is an expensive building to build,” she said. “Because of the way the building was built, with fast-tracking, I think that the people in charge of the building were not always aware of the costs as they were coming up.”

Steel was more expensive than expected. There were redundancies. The synagogue had to enhance the foundation of the neighboring West End Synagogue. A settlement with a neighboring residential building cost another million dollars.

LSS is hurting financially, but just how much is unclear. Several sources have said that the synagogue is lagging on its rental payments to the developer, but Kestenbaum, speaking on behalf of LSS, said, “We have not missed any.”

She added that there “are no immediate plans for borrowing for this project. We don’t want to put the synagogue’s future in jeopardy.”

Robinson said that the announcement of construction setbacks has prompted some member donations.

According to a memo sent out to members, the congregation’s president, Scott Liebman, who did not return requests for comment, stepped down from his post late in the week of October 11. “Scott decided that it is in the shul’s best interest to have a fresh start with new leadership to manage the building project,” said the letter, signed by the synagogue’s three vice presidents.

Down the block, on Amsterdam Avenue, a large area is fenced off with wire and boards. Through slats, passersby can see the beginning of LSS’s new building, now composed of shining steel and winding pipes. If and when construction starts up again, the building would take only months to complete, Robinson said. “The new shul will… be a headquarters for Modern Orthodoxy in New York City, if not beyond,” he vowed.

In the meantime, he said, “It’s enormously frustrating.”