Opponent: Steven White complained to the state education department about the sale. Image by JOSH NATHAN-kAzIS 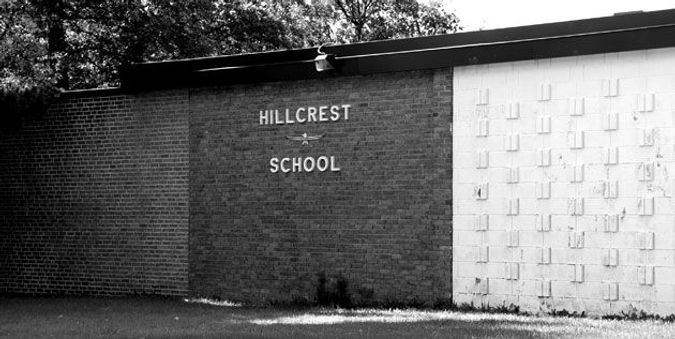 Shuttered: Controversy surrounds the sale of this closed school to a yeshiva in Rockland County. Image by JOSH NATHAN-kAzIS

The dirt road that someone cut through a few feet of brush to connect the Hasidic village of New Square to the playing fields of Hillcrest Elementary School in early October is only the latest in a series of puzzles surrounding the contested sale of the shuttered public school.

Opponent: Steven White complained to the state education department about the sale. Image by JOSH NATHAN-kAzIS

In this ethnically divided section of suburban Rockland County, close to New York City, it is also one more cause for an uptick in tensions between the area’s Orthodox Jewish community and their neighbors.

The road might not have been a problem had the New York State Education Department not placed a hold in late August on the purchase of the school by a New Square yeshiva, after a public school parent filed a complaint alleging, among other things, that the $3.2 million sale price was far below market value. And both the prematurely cleared road and the questions about the school’s sale price might have escaped notice if they hadn’t come as emotions over the mangement of the public school system were already threatening to spiral out of control.

Although Orthodox Jews in the predominantly Jewish upstate New York villages of Monsey and New Square send their children to private religious schools, six of the eight elected members of the Board of Education of the East Ramapo Central School District are Orthodox. A ninth, who recently resigned and has yet to be replaced, is also Orthodox. Some non-Orthodox community members allege that the Orthodox members of the board support the religious schools at the expense of the public school system — claims that the Orthodox board denies. But people on both sides agree that anger over the issue is running high.

“The tension is festering,” said Oscar Cohen, an area resident and a member of the Nyack, N.Y., chapter of the National Association for the Advancement of Colored People. He said the actions of the Orthodox school board members are “being perceived of as a Jewish thing.” Others were concerned about the possibility of violence.

In recent months, local chapters of the NAACP and the Anti-Defamation League have sent letters to the board and to the district’s superintendent, raising concerns about allegations from some local residents that the school board is discriminating against public school students. According to the state education department, 56% of the district’s students are black and 27% are Latino.

Both letters refer to an editorial that appeared last spring in The Advocate, a Monsey Jewish newspaper, arguing that “the job of the school board is not to support public or private schools — it is to do what is right for all the students of the district. In East Ramapo, where almost all the students are in private schools, the board needs to be accountable for them first.”

The president of the school board, an Orthodox Jew from Monsey named Nathan Rothschild, who is seen by some observers as playing a mediating role between the Orthodox and non-Orthodox members of the board, said that Orthodox board members have an interest in providing a good education to the public school students. But he also made clear that he saw himself as a representative of the “private school community.”

“We feel that our community is safer with educated [public school] children whose time is filled with education, extra-curricular activities and sports,” said Rothschild, who has been on the board for 15 years and has been president for the past five.

Rothschild said that when he first joined the board, the Orthodox community actively chose not to go for a majority of seats on the elected school board. “The implied threat that there could always be a fifth [Orthodox] member put on to take the majority was enough,” he said. Initially, he said, the goals of the Orthodox members were simply to keep property taxes low and secure some aid for private yeshivas.

“We were thankful for what we got, and we didn’t push hard,” Rothschild said.

“When the majority of the board was public school people and the private school had more children in the district, there were hundreds of things that clearly [the school board] could have done to help the private schools. We [the school board] did none of them,” Rothschild said. Now, the power of the majority has shifted to the other side. “If you don’t get up and vote, then you deserve what you get,” he said.

Aron Wieder, a Hasidic Monsey resident seen as the leader of the Orthodox faction on the school board, did not respond by press time to questions that he requested be submitted via e-mail.

Opponents of the current school board leadership say that the board’s focus on the private schools has led to a degradation of services in the public schools. State education department data show that the district’s graduation rate has sunk to 70% in 2009, down from 78% in 2005. But in 2004 — the year before the Orthodox majority was elected — its graduation rate was even lower lower, just 69%.

Meanwhile, public school enrollment has dropped. Since 1998, the number of students in the system has fallen to 7,901 from 9,299. The number of private school students living in the district is 18,000.

Rothschild cites this population imbalance as having necessitated the closing of Hillcrest, the second elementary school closed by the district in two years. The winning bid for the property was submitted by Congregation Yeshiva Avir Yaakov, based in New Square.

The request to put a hold on the sale was submitted to the state education department by Steven White, a public school parent and the coordinator of East Ramapo Stakeholders for Public Education, a civic group. In a memo to the commissioner of education, White claimed, among other things, that the school board did not “make a good faith attempt to obtain the best price for the school.”

Stephen Price, a non-Orthodox board member, has been quoted in the local press saying that he was not given a copy of either appraisal and was not informed that a second appraisal would be made before the fact, although he did miss a board meeting where it may have been discussed.

In another puzzling wrinkle, Rothschild said that the school board was unaware before the sale that the district owed nearly $3 million to the state for recent improvements to the property. He said that if the board had known of the debt, it might have asked the buyer of the property to take it on. If the sale is not canceled by the state education commissioner in his review of White’s complaint, Rothschild said, the board will still have a chance to cancel the sale itself.

The New York State Education Department did not respond to a request for comment.

In a legal document submitted to the department in response to White’s complaint, the school board denied that it had failed to obtain the best price for the school.

Rothschild said that he didn’t believe there had been communication between board members and members of the New Square community in the sale of the school. But he did say that he wouldn’t mind if it turned out that New Square had been given “a little bit of a break” in purchasing the property. The school’s proximity to New Square would eventually save the district busing costs that it currently covers for the New Square yeshiva students, he explained.

The work connecting New Square to the Hillcrest property was done without permission from the school board, which still owns the school. A fence was taken down, trees were cut and the land appears to have been graded to ease access between the properties. It’s unclear who ordered this work. According to local press reports, a New Square contractor named Yehuda Weissmandl claimed to have removed the fence after a tree fell on top of it. But no explanation was given for the felled trees or the graded slope. A new fence is now in place, and Rothschild said that the cut made in the ground would also be repaired.

Meanwhile, residents report an explosive atmosphere. Antonio Luciano, a retired New York Police Department lieutenant and public school parent who was defeated in the May school board elections, said that a December 2009 school board meeting nearly broke into “a full-blown riot.” He said that teachers have been reprimanding students who blame “the Jews” for the school system’s troubles. And White, asked if he was concerned about the possibility of violence, replied that he was. “That’s why I’m working so hard,” he said. “I don’t want it to.”

The acrimony is felt on both sides. Rothschild said that because of the strained atmosphere, he does not plan to run again when his seat comes up for re-election next May. “You have no idea how demoralizing it is to sit at a meeting and be beat up by everybody,” he said. “They say things that have parts of truth in it, and maybe more than just parts of truth. It’s a demoralizing thing. I don’t think anybody wants to go through that. I think we’d all love peace.”