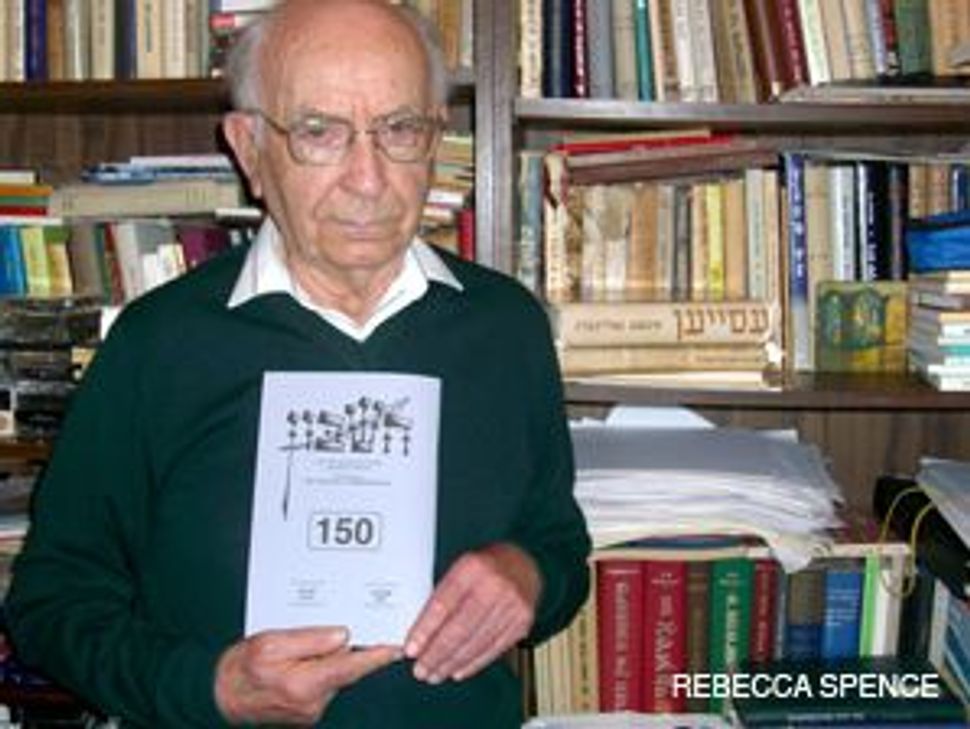 FINAL COPY: Editor Moshe Shklar holds what will likely be the final copy of the Yiddish literary journal Heshbon.

Los Angeles – Last October, a top Yiddish literary journal based in Los Angeles celebrated the publication of its 150th issue. Now it appears that its sesquicentennial issue may have been its last. 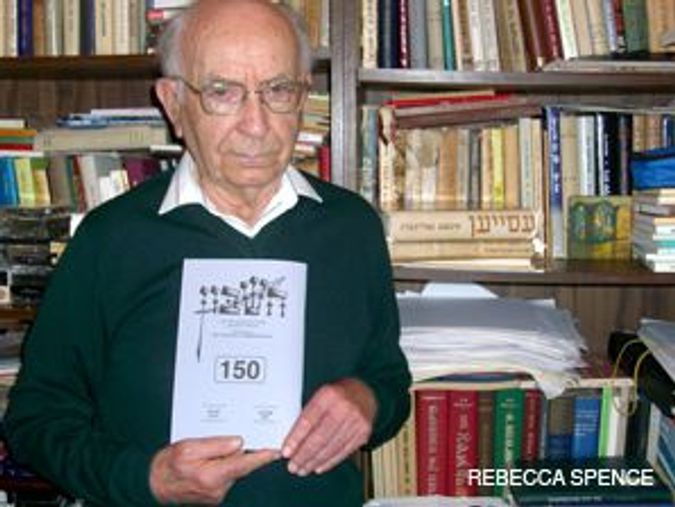 FINAL COPY: Editor Moshe Shklar holds what will likely be the final copy of the Yiddish literary journal Heshbon.

Heshbon, the crowning jewel of L.A.’s once-vibrant Yiddish literature scene, will more than likely cease publication in the wake of the resignation of its longtime editor, Moshe Shklar. The 87-year-old editor, who has helmed the journal for more than two decades, says that he can no longer continue in the face of mounting health problems.

The demise of Heshbon would deal a serious blow to the Yiddish literary landscape of L.A. and beyond. Of the more than dozen Yiddish journals once published in America, only a handful remain. Heshbon, founded in 1946 by the writers who made up the ranks of the L.A. Yiddish Culture Club, is one of the last surviving outlets for contemporary Yiddish poetry, fiction and literary criticism.

“This is like losing The Paris Review of Yiddish,” said Miriam Koral, founder and director of the California Institute for Yiddish Culture and Language and a lecturer in Yiddish at University of California, Los Angeles. “It symbolizes the lack of continuity of a certain high form of Yiddish literacy.”

Koral, the child of Holocaust survivors, has herself published Yiddish poetry in Heshbon. Now, she said, there will be one outlet fewer in an already minuscule pool of journals that publish new Yiddish works. These days, the few remaining Yiddish journals include Di Zukunft, published out of New York by the Congress for Jewish Culture and co-edited by Forverts editor in chief Boris Sandler, as well as Afn Shvel, a cultural journal published in New York by the League for Yiddish. In a glimmer of hope, a new annual Yiddish culture journal, Gilgulim, was recently founded in Paris.

In its heyday, the semiannual Heshbon claimed several hundred subscribers. It was, and still is, distributed internationally in France, Australia and Israel, and its contributors were culled from a cadre of top Yiddish writers from around the globe. Over the years, contributors have included writers Alexander Shpigelblat and Zvi Eisenman as well as poet Rivka Basman, all of whom live in Israel.

Heshbon has been holding on by a thread for the past few years, as its readership has withered and its funds have dwindled. But the final straw seems to have been Shklar’s physical decline and the vacuum it created.

“This is the last [issue], because the editor is not able to do it anymore,” Shklar said in reference to himself during an interview at his West L.A. home.

“And we have no other person who can do the work in Los Angeles.”

Shklar pointed not only to his personal health problems but also to the journal’s declining financial health as the reason for its imminent end. Each issue, he said, costs about $5,000 to produce. Some monies are earned from the journal’s 100 or so subscribers, but in recent years the journal’s primary funding has come from private donations. The majority of those funds dried up several years after the death of its major backer, Simcha Lainer.

Historically, L.A. has been a hub of Yiddish culture dating back to the 1920s. The L.A. Yiddish Culture Club was founded here in 1926 by the first wave of Eastern European immigrants. The city soon became home to some of the 20th century’s best-known Yiddish writers, including the much-lauded short-story writer Lamed Shapiro, who died in 1948.

The president of the L.A. Yiddish Culture Club, 86-year-old Lilke Majzner, hopes that the journal can remain operable in some form. “I don’t want to close the door completely, I want to leave it open,” she said. “We are all thinking that it’s not so easy to close something of this caliber.”

Majzner, who has led the club for 17 years, has watched as attendance at meetings has dwindled to between 50 and 80 people. Meetings, once held twice a week, are now held only twice a month. At its zenith, the club drew more than 200 people on a weekly basis, as immigrants and Holocaust survivors gathered to hear the giants of Yiddish literature give lectures and readings.

Koral said that while she is sympathetic to the vast amount of work it takes for Shklar to publish the journal, she wishes that he had trained a successor. “The only thing I fault him for — and the whole generation really — is that these people who themselves were so steeped in Yiddish and capable of transmitting it didn’t transmit it very well to the next generation, and they didn’t try to cultivate heirs.”

Asked whether he might have made an effort to cultivate an heir, Shklar laughed. “It’s not so easy to train a successor,” he said. “I worked 20 years at a newspaper in Poland. I got experience. I can do it in my sleep.”

And as for the handful of young Yiddish lovers who attend the club’s meetings? “They can hardly read Yiddish sentences,” Shklar said. “Maybe in 10 or 20 years, they can found a new journal on the Internet.”