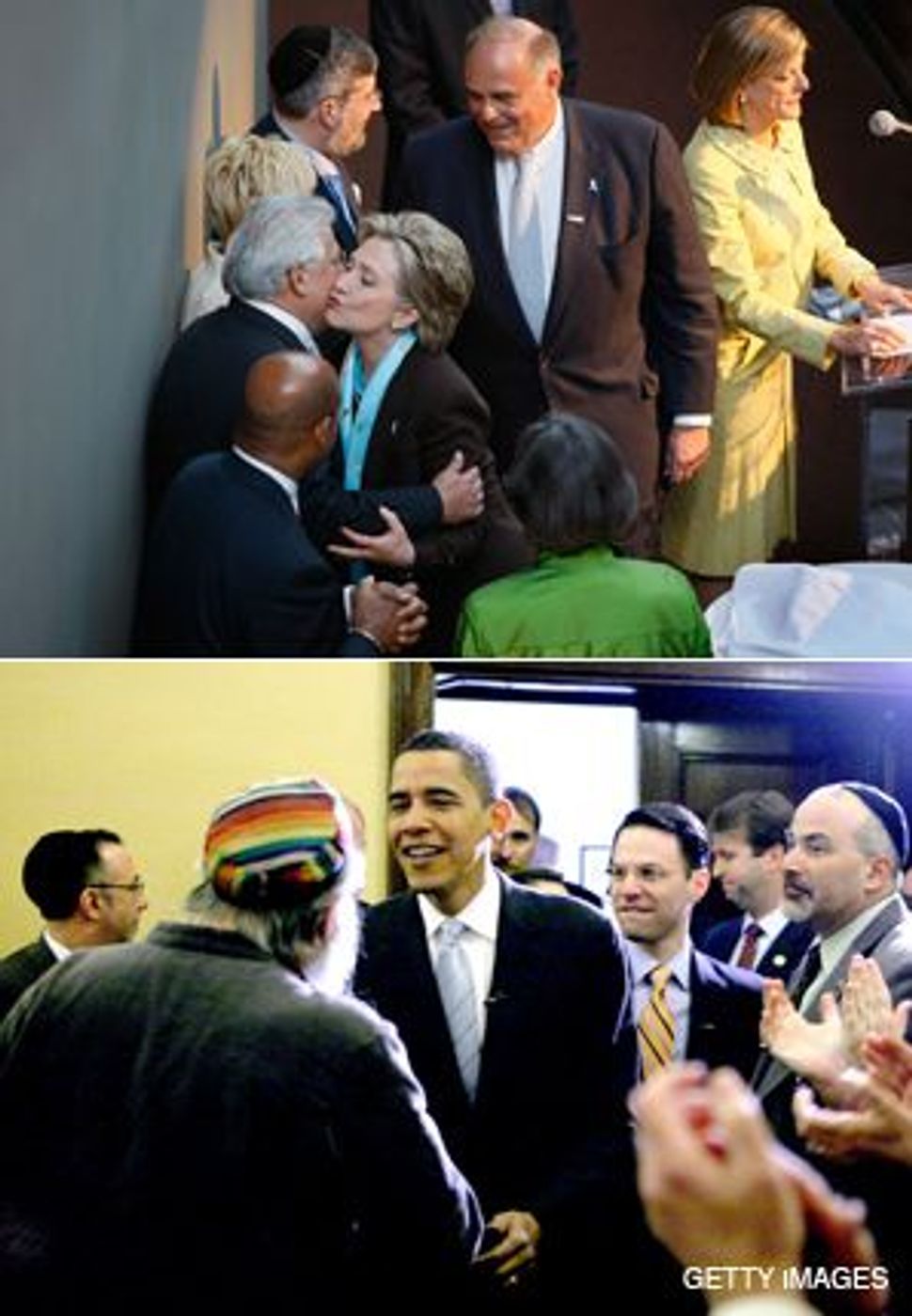 PENNSYLVANIA: Hillary Clinton and Barack Obama both courted Jewish voters in Pennsylvania before the state?s primary.

Senator Hillary Clinton captured 62% of Jewish voters in Pennsylvania on her way to defeating Democratic frontrunner Barack Obama in the Keystone State’s April 22 primary. The win represents Clinton’s strongest showing among Jewish Democrats, aside from an earlier contest in her home state of New York. 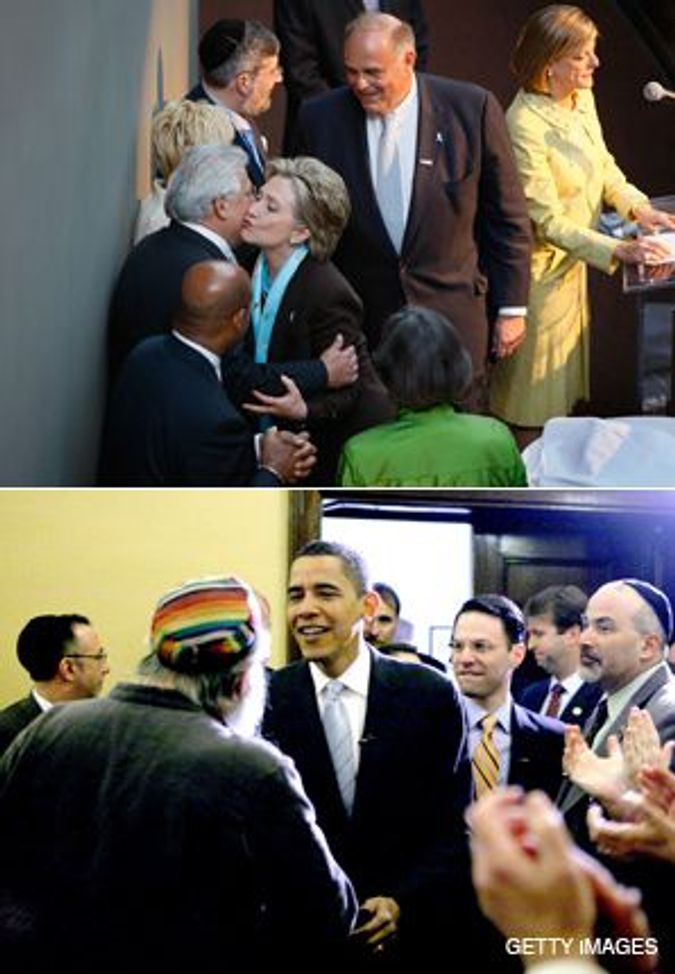 PENNSYLVANIA: Hillary Clinton and Barack Obama both courted Jewish voters in Pennsylvania before the state?s primary.

While the Pennsylvania results do little to alter the pragmatic realities of the primary race, which remains steeply tilted in Obama’s favor, they suggest the Illinois senator could face difficulty with some Jewish voters should he clinch the nomination. In recent weeks, both Democratic contenders have courted Pennsylvania’s Jewish community aggressively, with Obama struggling to dispel concerns about his relationship with his former pastor, Reverend Jeremiah Wright.

Less noticed, but with potentially broader implications for a November match-up with Republican John McCain, Middle East policy emerged as a wedge issue between the two Democrats, with Clinton employing increasingly heated rhetoric on Iran and working to present herself as a more vociferous defender of Israel.

Clinton has been arguing that Obama “is, in a nutshell, too inexperienced and too naive for the role of commander in chief — it’s clear that’s the message,” said Ben Chouake, who heads the New Jersey-based pro-Israel political action committee Norpac. “There are now Democrats who tell me that they’re voting for McCain in the general election — people who I could never, never imagine voting for a Republican and who would not vote for McCain if Clinton were running.”

Overall, white Democrats favored Clinton 65% to Obama’s 35%, according to exit polling conducted for the National Election Pool by Edison Media Research and Mitofsky International. Clinton performed especially well among Catholics, whose support for her hit 70%, while Protestants backed Clinton by a margin of 55% to 45%.

Pennsylvania’s Jewish voters, accounting for 8% of the total primary electorate, split 62% to 38% in Clinton’s favor, a margin that some local observers say reflects lingering concerns over Obama’s potential policies in the Middle East and his relationship with Wright.

“I think it’s temporary, but I think positions did harden over the last few weeks,” said Betsy Sheerr, a Philadelphia-based Jewish communal activist who is supporting Clinton. “I think the undecided Jewish voters broke for Hillary because of a sense of uncertainty about whether they could really trust Obama.”

Pennsylvania’s contest is the last time Obama will face a significant number of Jewish voters before a potential general election run. In previous primaries that included sizable Jewish populations — the Super Tuesday contests February 5 — some in the Jewish community also speculated that the Illinois senator would do poorly among Jewish voters, in part because of an e-mail smear campaign that falsely claimed he is secretly a Muslim and objections raised about some of his foreign policy advisers.

Instead, Obama captured the majority of Jewish voters in Connecticut and Massachusetts, a state he did not carry overall, while Clinton captured the largest slice of the Jewish vote, 65%, in her home state of New York and beat him by relatively smaller margins in New Jersey, California and Arizona, states she won overall. In Florida’s contested January primary, for which party rules permitted neither candidate to campaign, Clinton captured 58% of the Jewish vote.

While both Clinton and Obama have aggressively courted Jewish voters throughout the campaign — presenting themselves as staunch allies of Israel and vowing, as president, to prevent Iran from gaining nuclear weapons — Clinton took a notably more hawkish tone on Tehran in the homestretch before the Pennsylvania primary. A pivotal moment came during an April 16 debate sponsored by ABC News in Philadelphia, when the Democratic contenders were asked if they would treat an “Iranian attack on Israel as if it were an attack on the United States.” While Obama vowed to “take appropriate action” on behalf of America’s “strongest ally in the region,” Clinton said she “would make it clear to the Iranians that an attack on Israel would incur massive retaliation from the United States.”

In a subsequent interview aired by ABC’s “Good Morning America” on April 22, Clinton took her rhetoric one step further.

“I want the Iranians to know that if I’m the president, we will attack Iran,” she said, referring to her response to a hypothetical attack on Israel. “In the next 10 years, during which they might foolishly consider launching an attack on Israel, we would be able to totally obliterate them.”

The growing difference in tone among the Democratic contenders did not go unnoticed by Obama supporters, who began to argue that it reflected positively on the Illinois senator. One recent e-mail alert sent by Gidon D. Remba, a veteran Israeli activist who recently started an independent e-newsletter called Jews for Obama, derided what he called Clinton’s strategy of “gonzo ‘deterrence.’”

Other communal observers, unaligned with either campaign, said that Clinton’s hawkish rhetoric on Iran could hurt her with Jewish liberals.

“As an individual, I’m greatly more concerned about her than I was two weeks ago,” said Rabbi Arthur Waskow, a left-wing activist and rabbi who heads the Philadelphia-based Shalom Center but spoke to the Forward only in his capacity as an individual voter. “She thinks the Jewish community is ready to obliterate Iran, and she’s ready to say that she’s willing to obliterate Iran.”

In recent days, Obama has stressed diplomacy on the campaign trail. During a campaign stop in Reading, Pa., on April 20, the Illinois senator criticized both President George W. Bush and former president Bill Clinton for putting off their attempts to make peace between Israelis and Palestinians.

“Bill Clinton did it in his last year, and he ran out of time,” Obama told the audience.

In the wake of Pennsylvania’s contest, several Jewish insiders had differing opinions on whether Obama, who for now remains the likely Democratic nominee, might face a challenge in clinching the Jewish vote come November.

New York Democratic strategist Hank Sheinkopf said he viewed a serious Jewish problem for Obama as a remote possibility. “We tend to follow the rest of the population overall, except that in general elections we follow the Eleventh Commandment, which is, ‘Thou shall vote Democratic — except under certain circumstances,’” Sheinkopf said. “So it’s hard to imagine a scenario in which Jews do not favor the Democratic nominee, even if it may be Barack Obama.”