Price of Beauty: Boycotts and ?Buycotts? 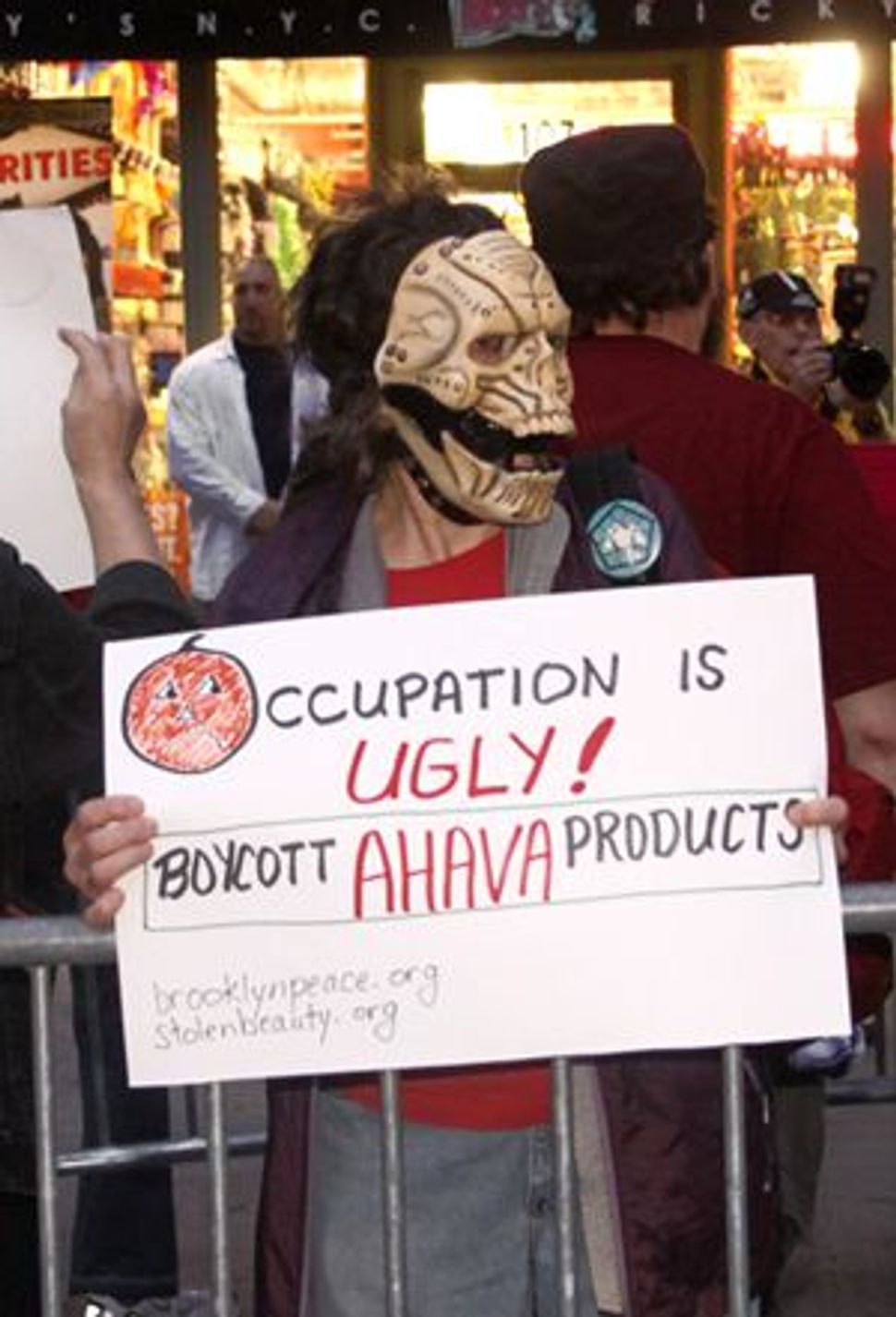 Protest/Counter-Protest Demonstrators rally outside Ricky?s NYC in Brooklyn Heights on October 26. At left, activists hold signs supporting a boycott of Ahava. At right, an opponent of the boycott. Image by Shulamit Seidler-Feller

The Middle East conflict has inflamed college campuses, bedeviled political campaigns and sparked street demonstrations. But cosmetics stores are the latest, and perhaps least likely, sites so far to bear witness to the sprawling nature of this ever deepening dispute.

At Ricky?s NYC in Brooklyn Heights ? part of a self-described ?edgy, ultra-hip? chain of New York costume and beauty supply stores ? protesters banged drums, blew trumpets and marched around with fright masks in front of display windows stocked with bright colored packages of lotions and potions on October 26. The protesters were dramatizing their contention that the store?s Ahava beauty products add an ugly dimension to its offerings. Led by the groups CodePink and Brooklyn for Peace, some 40 demonstrators condemned the Israeli company and the store because Ahava?s products are manufactured at a settlement in the Israeli-occupied West Bank. 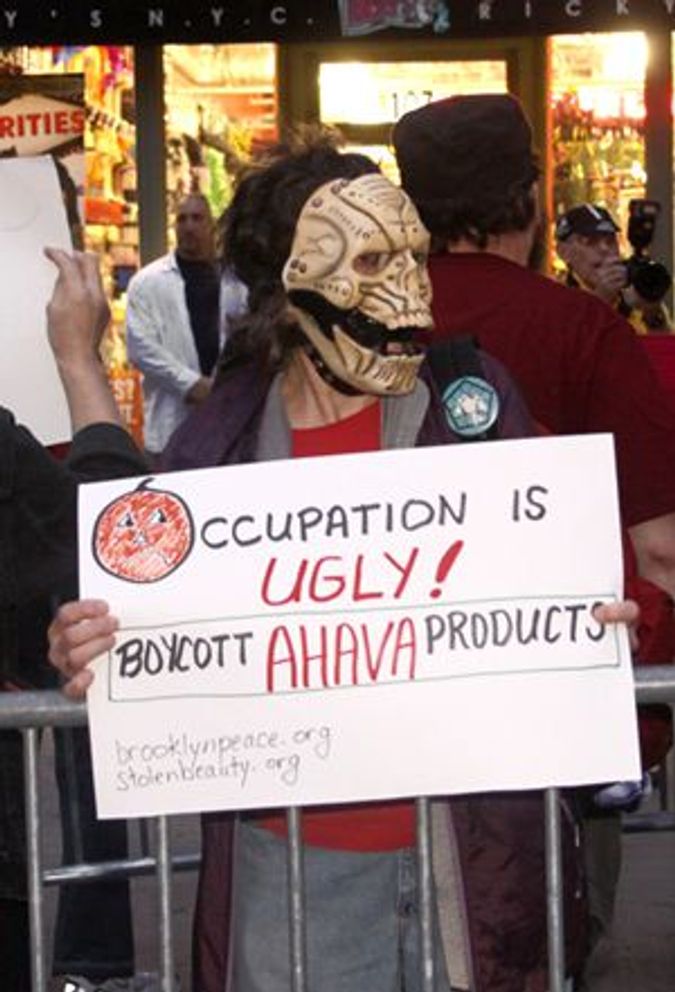 The anti-Ahava campaign has been going on for more than a year. But at Ricky?s and elsewhere, counter-protesters have now emerged. About 15 of them made a point of buying Ahava products from the store. Then, clustered right next to the anti-Israel group, they chanted slogans such as ?Not one inch!? Some carried signs claiming that there was ?no such thing as Palestinian people.? As the anti-Israel protesters chanted ?Ahava?s a beauty cream killing Palestine?s hopes and dreams,? a gaggle of girls shrieked the words of the Shema prayer in an effort to drown them out.

It?s boycott versus ?buycott? in the latest twist to the Israel-Palestinian dispute. But here, shampoo, conditioner and moisturizer have replaced territories, terrorism and occupation as the focus of contention.

CodePink, a left-wing activist women?s group, launched its ?Stolen Beauty? campaign to highlight Ahava?s production of ointments made from Dead Sea minerals on the site of the Israeli West Bank settlement of Mitzpe Shalem. The campaign is part of the larger international Boycott, Divestment and Sanctions (BDS) for Palestine movement that mirrors the language of divestment campaigns that targeted apartheid-era South Africa. Since the campaign?s start, Costco has quietly removed Ahava from its shelves, and the United Kingdom?s trading standards office has launched an investigation into the company?s labeling practices.

But last July, when protesters targeted the Ulta cosmetics store in Silver Spring, Maryland, the local Jewish community relations council organized an Ahava buycott that ?cleaned the shelves out,? as one pro-Israel organizer boasted to the Jerusalem Post. Plans are now afoot in London for counter-protests in front of the Ahava store in Covent Garden in November.

?I expected a big pushback from pro-Israel protestors, but we really did not have any for the first year until Brooklyn for Peace got involved,? said Nancy Kricorian, CodePink?s New York City coordinator and originator of the campaign. ?Taking it to Brooklyn [this summer] was like putting a red flag before a bull.? Seven rabbis signed onto a letter in the Brooklyn newspapers against the boycott.

Boycotters assert that Ahava violates international law by locating its production facility in a settlement on the occupied West Bank that is itself considered illegal ? a violation of the Fourth Geneva Convention ? by almost the entire international community. Buycotters, bolstered by organizations such as StandWithUs, Hadassah and Jewish community relations councils in several cities, argue that the land in question has been uninhabited by Palestinians and lies in a part of the West Bank designated as ?Area ?C?? in the 1993 Oslo Accords, signed by Israel and the Palestinians. While other West Bank areas are under full or partial Palestinian control, Area ?C? remains exclusively under Israeli military jurisdiction under the terms of the accords.

In response to questions from the Forward, Ahava released a statement saying, ?We continued to be pleased with our sales and the enthusiastic response of retailers and consumers. Boycott efforts based on false claims by fringe political groups designed to grab headlines and consumers are unfortunate and illegal.?

The company declined to further comment or explain how the boycotts are illegal; how its bottom line has been affected by the boycott and subsequent investigations, and why it chose to locate its plant on the West Bank.

Rabbi Joseph Potasnik of Congregation Mount Sinai in Brooklyn Heights, one of the rabbis who signed the anti-boycott letter, attended the counter-protest with some congregants. ?I buy Ahava,? he said. ?These protests don?t advance the cause of peace one iota. The whole settlement issue has to be negotiated. These protestors have already reached a conclusion without going through the process.?

The escalation of both the boycott campaign and opposition to it come as supporters of Israel increasingly point to BDS as part of an effort to ?delegitimize? Israel. On October 26, the Jewish Council for Public Affairs and the Jewish Federations of North America announced the creation of the Israel Action Network to actively combat BDS campaigns. The initiative, with an initial budget of $6 million, will have seven paid staffers working out of JCPA?s main office in New York, plus a staffer in Jerusalem and one in Washington. Some will be tasked with responding immediately to BDS actions as they occur, others with planning strategies for the long term.

?The delegitimization movement aims to create an equation between Israel, South Africa, apartheid, colonial power, and deserving to be punished through the use of boycotts and sanctions,? said JCPA?s senior vice president, Martin Raffel, who will oversee the network. ?We see our job as projecting a more accurate, fair and balanced picture.? He expects to formally launch the initiative in January.

Rabbi Andy Bachman of Park Slope?s Congregation Beth Elohim, who signed the anti-boycott letter, said BDS is never just a boycott, noting that even the dovish group J Street keeps its distance from the movement. ?All the BDS groups, none of them really recognize the two-state solution,? he said. ?I believe really strongly in a two-state solution and feel like all diplomatic channels of mature and responsible adults are working toward that. [BDS] is an attempt to chip away at Israel?s image and establish Israel as a pariah state. ?So many of the [BDS] member groups are for the ultimate eradication of Israel as a Jewish democratic state.?

Many Israel supporters see a two-state solution to the conflict as crucial to ensuring Israel?s future as a democratic state with a strong Jewish majority.

Naomi Allen, an activist on the board of Brooklyn for Peace, said that for her group, it?s just about the settlements, not Israel as a whole. ?We adopted a position in favor of boycotting Israeli products from the settlements and the occupied West Bank this May,? she said. ?There was already an Ahava boycott going on, so we decided to extend it to Brooklyn, where there?s a couple of outlets that sell Ahava.?

Kricorian likewise claims she is often mistakenly painted as an Israel delegitimizer. ?I?m for human rights and international law. How is that delegitimizing Israel?? she asked. She declined to state her position on a two-state solution. ?It doesn?t matter how many states it is. It?s not our place to decide.?

A representative of Ricky?s NYC declined to comment. But Hindy Poupko, director of Israel and international affairs for the Jewish Community Relations Council of New York ? which sent a 15,000-signature letter to Ricky?s CEO Dominick Costello asking him to keep selling Ahava ? said Ricky?s assured her that the store won?t take Ahava off its shelves. ?They?re not convincing the unconvinced,? Poupko said of the anti-Ahava activists. ?They?re talking to themselves.?

Price of Beauty: Boycotts and ?Buycotts?