Some Israelis Hoping for A GOP Win, But Will History Repeat Itself? 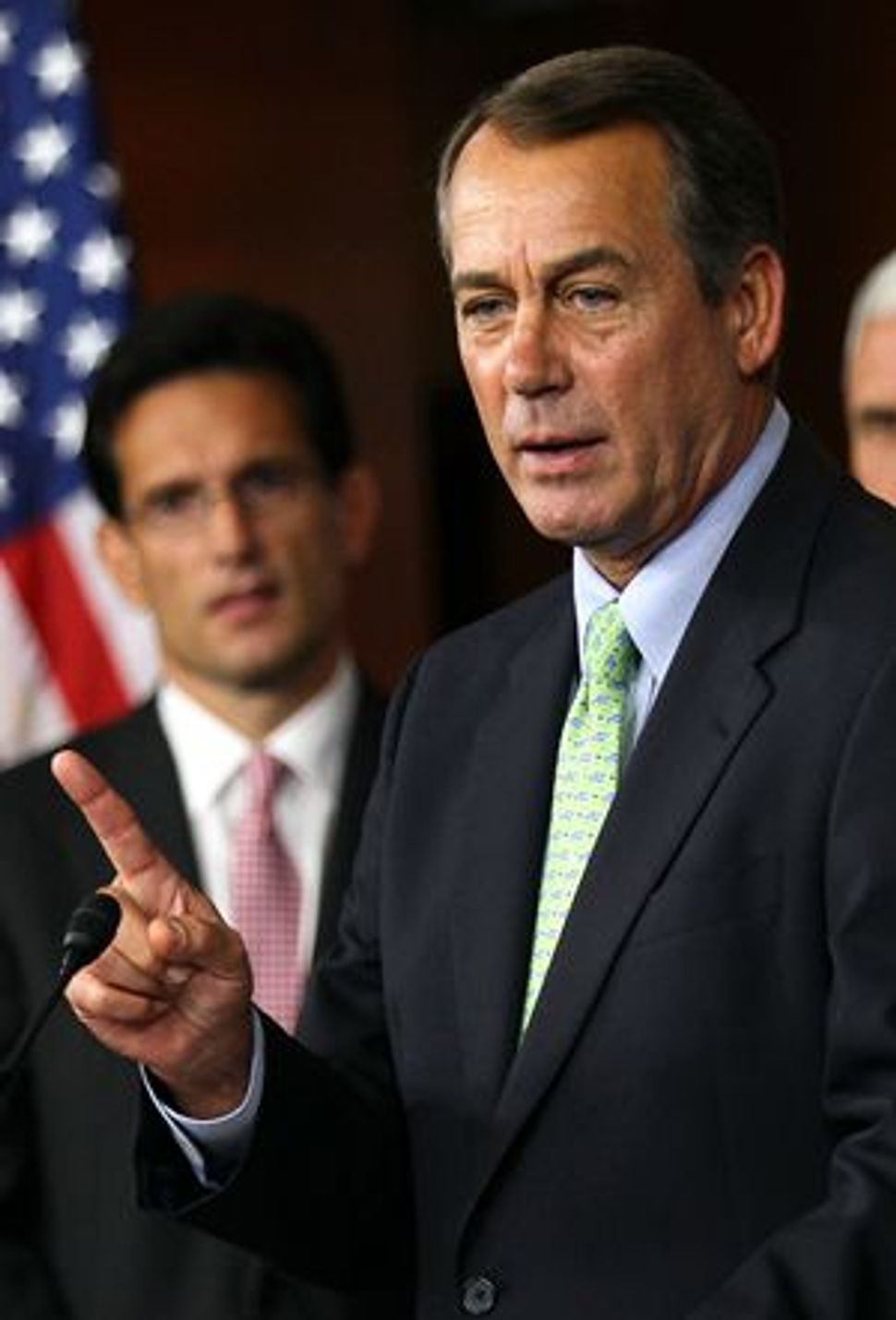 Friendlier?: If the Republicans were to capture the House in the upcoming elections, John Boehner would become speaker. Image by GETTY IMAGES

As predictions of a Republican tidal wave in the coming congressional elections became more certain, some Israelis were experiencing goose bumps of anticipation.

Many on the right in Israel believe a shift of one or both houses of Congress to a Republican majority could limit the Obama administration?s ability to pressure Jerusalem ? even more than it is already limited with the Democrats ? in its quest for a peace deal between Israel and the Palestinians. 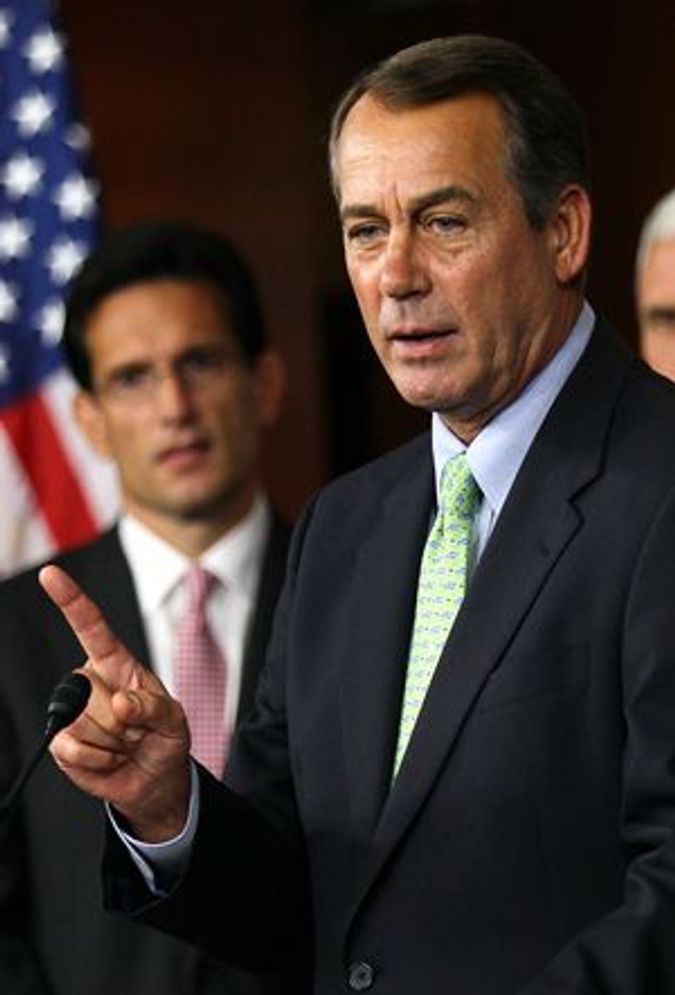 Friendlier?: If the Republicans were to capture the House in the upcoming elections, John Boehner would become speaker. Image by GETTY IMAGES

Early in his current term, Israeli Prime Minister Benjamin Netanyahu expressed his own predilection succinctly: ?I speak Republican,? he told Alon Pinkas, a top Israeli diplomat whose help he was seeking in establishing rapport with President Obama, then new to the White House. Currently, Netanyahu refrains from speaking on the issue but is still said to be watching the November elections closely.

Israeli officials, according to a congressional source, have also been raising questions in recent weeks about a possible change in U.S. policy if Democrats lose the House.

?Netanyahu fears a strong Obama who can apply pressure,? said Yaron Deckel, Israeli TV?s Channel 1 political commentator. ?If the Republicans win big in the midterm elections, Obama will be weaker and less inclined to pressure Israel, and that will buy Netanyahu more time.?

But even if Republicans do win a majority in the House of Representatives, they will not, say some analysts, be like the Republicans Netanyahu worked with in the 1990s. While hawkish and pro-Israel, the new GOP leadership sees Israel as a lower-level priority, these analysts say.

John Boehner, the current House minority leader, ?does not,? Bloomfield continued. Boehner will become House speaker if Republicans win a majority. ?Bibi doesn?t have a Republican leadership that is interested in Israel as an issue,? Bloomfield said.

Furthermore, the neo-conservative strain of the Republican Party that was dominant during Netanyahu?s first term as prime minister and was highly active on foreign policy issues is in decline. Greater influence in the party now lies in the hands of the Tea Party movement, a group for whom foreign policy is a second-tier concern. The Tea Party movement contains several contradictory strains when it comes to Israel.

Still, some observers believe that a Republican gain would benefit Israeli opponents of the Obama administration?s Middle East policy.

Yoram Ettinger, a defender of Israel?s permanent hold on the West Bank who served in the early 1990s as minister for congressional affairs at Israel?s embassy in Washington, said a defeat of Democrats would ?express total mistrust in a president who is critical toward Israel.? Ettinger, currently a consultant on U.S.-Israel relations at the Ariel Center for Policy Research, said Israel should seize the opportunity a GOP majority would present and upgrade its work with Congress. ?We will see a new political equation that is much more comfortable for Israel,? he said.

Israelis have been accused in the past of heavy-handed meddling in American politics. Arriving as Israel?s ambassador to Washington in the presidential election year 1968, Yitzhak Rabin famously spoke openly of his preference for Richard Nixon over Hubert Humphrey, angering Jewish Democrats. And in the late 1990s, Netanyahu was widely seen as allying himself with the Republican majority then in Congress in an attempt to deter President Bill Clinton from pressing forward with the peace process. Memorably, Netanyahu chose to open his high-stakes January 1998 visit to Washington with a series of meetings with conservative congressional leaders, including Gingrich and Kansas Republican Senator Sam Brownback, before heading to the White House to meet with Clinton.

Back then, Congress took many measures that complicated Clinton?s drive for an Israeli-Palestinian agreement, including passing a law requiring that the U.S. embassy be moved to Jerusalem (though, at the administration?s insistence, a presidential waiver of the requirement was included). Congress also put restrictions on U.S. funding and recognition of the Palestinian Authority.

But Middle East expert David Makovsky warned against expectations that a Republican Congress this time would curb the president?s drive for Israeli-Palestinian peace. ?History doesn?t necessarily repeat itself,? said Makovsky, director of the project on Middle East peace at the Washington Institute for Near East Policy.

Congress? ability to intervene on foreign policy issues is limited, but does exist. A Republican-led House could blast the White House with letters, could adopt declarative resolutions and could pass legislation that would make promoting an American peace plan for the Middle East more difficult.

One proposal already being discussed if Republicans take over the House is detaching U.S. aid to Israel from the foreign aid bill. Virginia Rep. Eric Cantor, who is expected to take a House leadership role if Republicans win a majority, told the JTA that such a separation would make it easier to maintain aid to Israel while cutting U.S. assistance to other foreign countries??a popular goal for many Tea Partiers. Israel currently receives nearly $3 billion in yearly military assistance.

Democrats blased the proposal, warning it would ulitmately endanger aid to Israel by isolating it.

A Congressional Democratic staff member pointed also to the impact a switch to a Republican majority could have on coordination between the White House and Congress. Recently, the administration has worked closely on Iran sanctions legislation with Howard Berman, the Democratic chair of the House Committee on Foreign Affairs. At the request of the White House, Berman delayed a vote on sanctions legislation, despite Republican pressure, until the administration completed international consultations that led to a United Nations resolution on this issue. It is not clear if Florida Republican Ileana Ros-Lehtinen, who is expected to chair the committee if her party wins the majority, would act in the same way.

Citing the sanctions bill as an example, New York Democrat Gary Ackerman, argued that Israel?s best bet for addressing any concerns about Obama?s policy would be for Democrats to retain power. ?I?m not saying that if the Republicans take the House it would be doomsday for Israel, but if they want positive influence on the White House, that?s us,? said Ackerman, who chairs the subcommittee on the Middle East and South Asia of the House Committee on Foreign Affairs.

Ackerman and other Jewish Democrats point to the forceful criticisms they conveyed to the White House when they thought that Obama was leaning too hard on Israel.

?If you need the president, you need us as chairs of the committees,? Ackerman said as he listed what he called the ?first-class team? of Jewish pro-Israel Democrats who chair key House committees: Berman at Foreign Affairs, Barney Frank at Financial Services, Henry Waxman at the Energy and Commerce committee, Sander Levin at Ways and Means, and Ackerman himself in his role as head of the Middle East subcommittee. ?We are all pro-Israel and we all have major, major, major influence in the executive branch.?

Some Israelis Hoping for A GOP Win, But Will History Repeat Itself?