Activists Who Exposed Meat Industry Reveal Their Own (Kosher) Identity 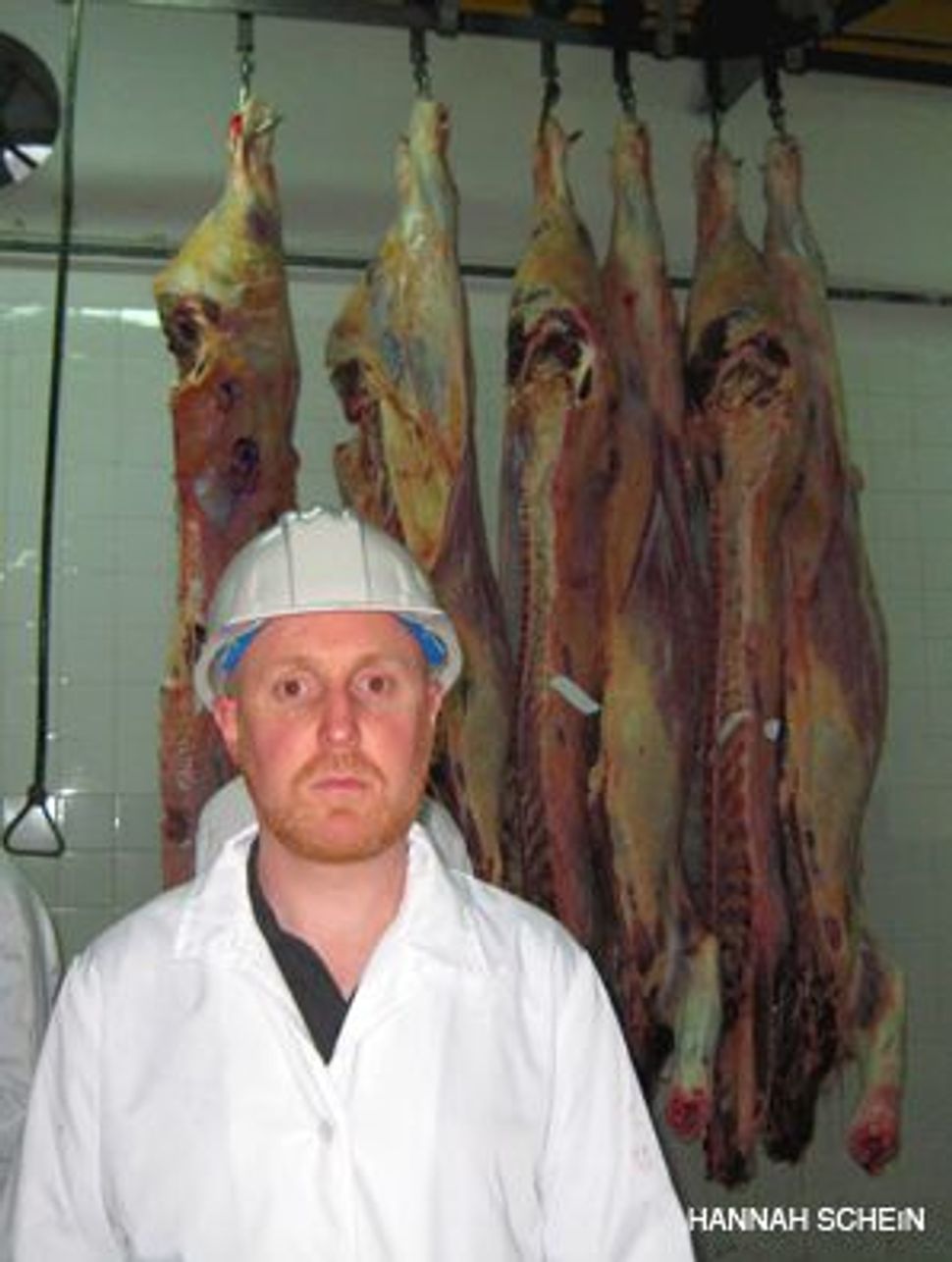 When AgriProcessors, America’s largest kosher slaughterhouse, was caught on tape conducting what a federal agency later called “acts of inhumane slaughter,” officials at the plant knew they had been infiltrated by undercover investigators. What the company didn’t know was that two of those infiltrators were a married couple who keep kosher themselves. 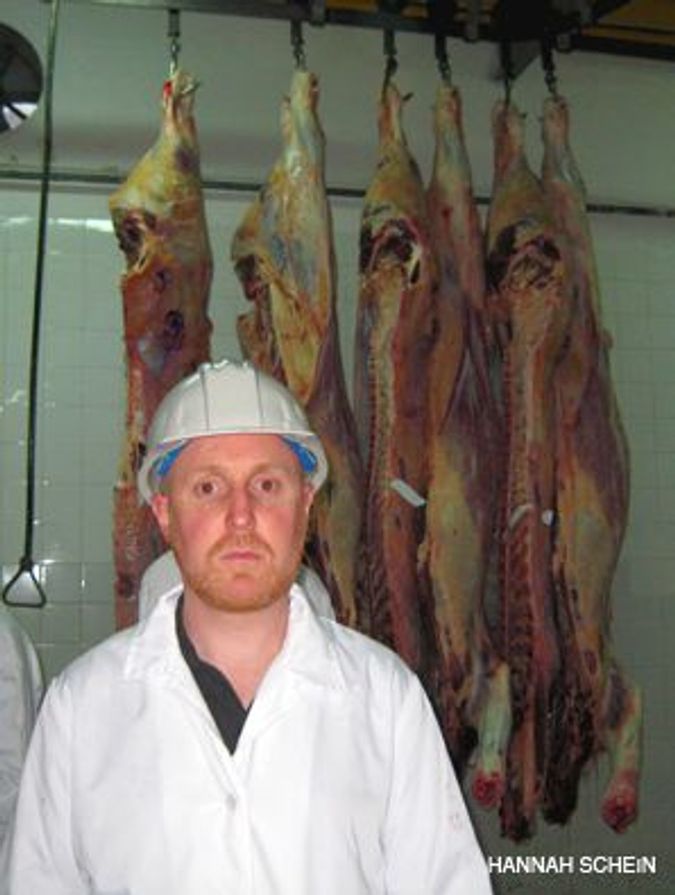 Meet Hannah and Philip Schein, undercover investigators for the animal rights group People for the Ethical Treatment of Animals. Now, for the first time, they are going public with their identities.

Since 2002, the Scheins have taken on about 20 undercover cases, as well as others they have conducted publicly. The targets of their stings have run the gamut from an egg farm managed by Trappist monks, to a Canadian bear-baiting operation that has supplied fur to the British Royal Guards, to songstress Beyoncé Knowles, once an enthusiastic wearer of fur.

But thanks to their background and their knowledge of the laws of kashrut, Hannah, 33, and Philip, 43, have come to specialize in investigating kosher slaughterhouses. Indeed, PETA had not investigated kosher operations until the Scheins came on board; since then, the group has been involved in about eight such cases. Philip in particular has been credited with becoming an expert on kosher slaughter.

“If it weren’t for Philip and his interest and pursuit of this issue, I’m not sure that we would have been able to do those investigations,” said Daphna Nachminovitch, PETA’s vice president of cruelty investigations. “They were Philip’s brainchild.”

The Scheins’ — and PETA’s — first investigation of a kosher slaughterhouse took place in 2004, when the organization obtained footage of cows walking around with their throats cut at AgriProcessors’ plant in Postville, Iowa. Hannah had trained the investigators who went undercover for the exposé, and Philip analyzed the video footage that PETA subsequently received.

Under pressure from rabbis as well as animal rights groups and government agencies, the company promised to change its slaughtering procedures, though AgriProcessors has been the subject of several more of the Scheins’ investigations.

An AgriProcessors representative declined to comment for this article. But Norman Schlaff, the owner of the Musicon Farm in Gosha, N.Y., was willing to discuss his experience with the Scheins, who paid an undercover visit to his kosher deer slaughterhouse last year.

Schlaff said that two young people who appeared to be a Modern Orthodox couple toured the farm and, like many of his visitors who wish to ensure that their meat is kosher, took videos and photographs of the slaughtering process.

“The next day, PETA called and said, ‘Go on the Internet,’” Schlaff said.

He found a page on the group’s Web site that accused slaughterers at the farm of sitting on the deer to hold them down while their throats are slit, an allegation that Schlaff denies. “It was really very disturbing,” Schlaff said of the unwelcome attention he received after the PETA article. “I got thousands of e-mails, including some death threats from people saying, ‘We’re going to do to you what you do to the deer.’”

The Scheins maintain that they want only for kosher slaughter to live up to what they consider its original purpose: to minimize the suffering of the animals. Orthodox Jewish standards of kashrut have “gotten so focused on the letter of the law that they’ve lost sight of the fact that [kashrut] is about reducing suffering,” Hannah said.

But according to Rabbi Menachem Genack, head of the Orthodox Union’s kashrut division, liberal Jews such as the Scheins are using the term “kosher” as a “generic phrase” to denote practices they consider morally acceptable, thus missing the “fundamental issue” of kashrut: obedience to Jewish law.

Hannah and Philip are currently working (openly) on a project to reform what they say are animal abuses committed in ultra-Orthodox neighborhoods in the course of observing the pre-Yom Kippur absolution ritual known as kapparot.

The kapparot crackdown may cause a stir in such Orthodox enclaves as Brooklyn’s Boro Park, but it probably will not get as much attention on celebrity gossip blogs as Hannah’s encounter last year with Beyoncé. After PETA won a dinner with the singer in an auction, Hannah and a second PETA employee, armed with a hidden camera, sat down with her — and accused the star of being complicit in the abuse of animals by using fur in her wardrobe and in her clothing line, House of Deréon.

“I can’t tell you how quickly they escorted us out of there,” Hannah said. She added that Beyoncé has not been seen in fur since.

Though a glimpse at the Scheins’ career makes them sound like Erin Brockovich-style crusaders, their partnership started out far more innocuously. Hannah and Philip met at a 1998 orientation for new professionals in the Jewish campus organization Hillel. They married a year later in New Jersey, right after Hillel’s 1999 conference ended.

In 2002, Hannah took a job in PETA’s investigations department, and the Scheins moved from upstate New York, where both had been working on graduate degrees, to a town near Norfolk, Va., where PETA is headquartered. Shortly thereafter, Philip, a longtime vegan and animal rights advocate, joined Hannah at the organization.

The Scheins have decided to go public as part of a publicity bid for PETA. Despite the sensitive nature of their undercover work, they say they are not worried about the media attention.

Their confidence in their ability to carry on undercover investigations — and to have carried out so many in the first place — appears to be rooted in the techniques they use when they go undercover, which they will not divulge.

But she added, “Everything we do is legal.”

Activists Who Exposed Meat Industry Reveal Their Own (Kosher) Identity