A Glass Half Full 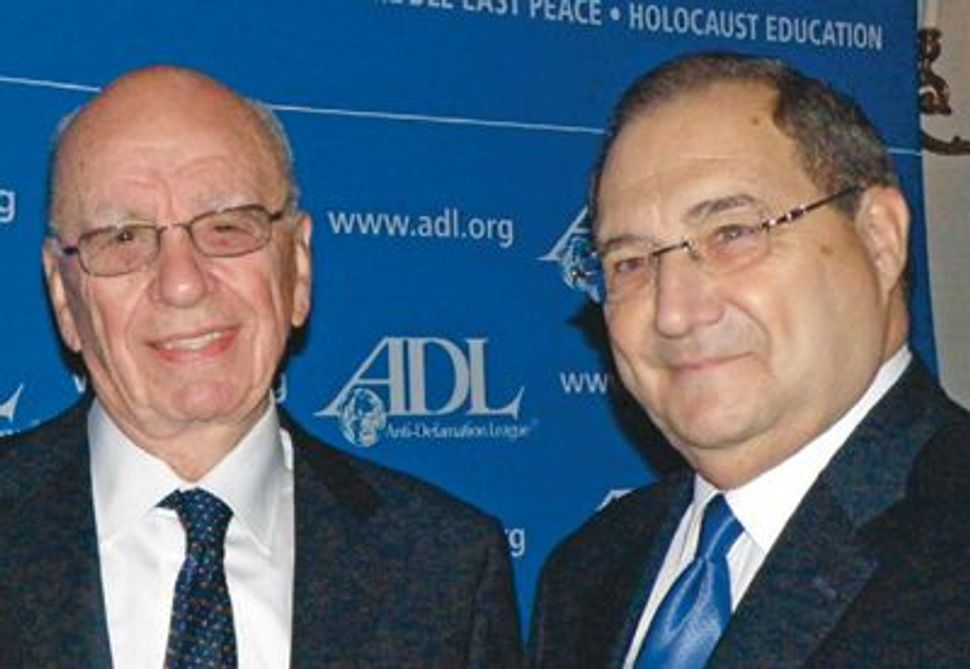 Chooser and Chosen: Rupert Murdoch being honored by Foxman (right) and the ADL. Image by Karen Leon

ACCORDING TO RUPERT MURDOCH, HONOREE AT ANTI-DEFAMATION LEAGUE GALA: ?THE WORLD CAN?T END TODAY BECAUSE IT?S ALREADY TOMORROW IN AUSTRALIA?

?I can?t say I have been chosen by God. But tonight I am honored to be chosen by His people for this award,? declared Rupert Murdoch, who accepted the Anti-Defamation League?s International Leadership Award from its national director, Abraham Foxman, at the ADL?s October 13 tribute dinner. ?We live in a world where there is an ongoing war against the Jews,? said Murdoch, chairman and CEO of News Corp. Had Whoopi Goldberg and Joy Behar of ?The View? been among the guests that night, they might have fled at the sight of the approximately six-and-a-half-foot-tall Bill O?Reilly, host of Fox News? ?The O?Reilly Factor,? whose boss, Fox News Channel chairman Roger Ailes ? along with Barry Diller, chairman and CEO of IAC/InterActiveCorp; Harvey Weinstein, co-chairman of the Weinstein Co.; and Mortimer Zuckerman, chairman of Boston Properties ? co-chaired the dinner. The event was launched with a heimish flair by the emcee, Fox Business News anchor Liz Claman, a redhead, who joshed, ?What?s an Irish girl? sorry, a Jewish girl, who grew up on a small farm in Beverly Hills doing emceeing at the ADL?? 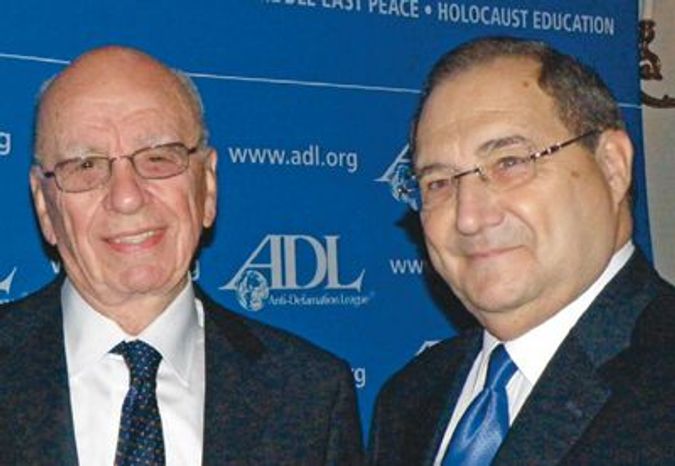 Chooser and Chosen: Rupert Murdoch being honored by Foxman (right) and the ADL. Image by Karen Leon

Foxman described how he and Murdoch first met: ?Under orders from my wife [Golda] to de-stress, I signed up for a week at a spa in California,? Foxman explained. ?Rupert did, too. And so we met and bonded, and we hiked the hills and shvitzed in the sauna?I learned that he deeply cared about the values of democracy and freedom?the need for pluralism; that he cared deeply about the safety and security of the State of Israel and that he was as concerned as I was about the threat of Islamic terrorists like those who attacked the Chabad House in Mumbai?I learned that when Rupert Murdoch speaks, people listen.?

Accepting the award from Foxman, Murdoch said: ?I am especially proud that this award bears the name of the ADL?. You were founded a century ago against the backdrop of something we cannot imagine in America today: the conviction and then lynching of an innocent Jew [Leo Frank]. ?

Addressing terrorism, Murdoch cited ?the massacre of Israeli athletes at Munich and the Second Intifada?. Every day the citizens of the Jewish homeland defend themselves against armies of terrorists whose maps spell out?a Middle East without Israel. In Europe, Jewish populations find themselves targeted by people who share that goal.?

Murdoch cited the ?two things that worry me most?the disturbing new home that anti-Semitism has found in polite society ? especially in Europe ? and how violence and extremism are encouraged when the world sees Israel?s greatest ally distancing herself from the Jewish state.?

After enumerating anti-Semitic stirrings around the world, Murdoch declared: ?Ladies and gentlemen, back in 1937, a man named Vladimir Jabotinsky urged Britain to open up an escape route for Jews fleeing Europe. Only a Jewish homeland, he said, could protect European Jews from the coming calamity?.The world of 2010 is not the world of the 1930s. The threats Jews face today are different. But these threats are real.?

Addressing the gathering ? which included representatives from Austria, Bulgaria, Germany, Israel, Turkey, Ukraine, Hungary, Great Britain, Russia and Spain ? ADL?s national chair, Robert Sugarman, described visiting the FBI training center in Quantico, Va., where, ?Every trainee before [becoming] an FBI agent has a full day of training by the ADL, in cooperation with the U.S. Holocaust Museum in Washington, so that they fully understand the immense responsibility and authority they have and the consequences of the misuse of that authority.?

As emcee Liz Claman introduced ?a true friend of Israel?Roger Ailes,? the Waldorf-Astoria ballroom exploded in applause as it was announced that the last of the 33 miners in Chile had been rescued. Praising ?my boss [Murdoch],? Ailes recalled a visit to his office where ?the desk was bare?in his [attaché] case he had an apple, a banana and a copy of People magazine. That?s it.? Ailes touted Murdoch?s ?glass is half-full? optimism. ?He claims that the world can?t end today, because it?s already tomorrow in Australia.?

?Sheba is the most important hospital in Israel. It represents what is good about Israel, good about humanitarianism,? Helene Feldman, chairman of the board of the American Friends of Sheba Medical Center ?The Hospital Without Borders,? told the 650 black-tie guests at its October 19 gala. The hospital ? which treats 1.5 million Israeli, Arab and Palestinian patients each year and all of Israel?s IDF wounded ? is also currently running the largest orthopedic rehabilitation clinic in Haiti, outfitting prosthetic limbs for the more than 4,000 Haitian amputees. The evening?s honorees were Teheran-born philanthropist and AMFSMC board member Mitra Damaghi and award-winning shoe industry innovators, husband-wife philanthropists Libby & Sam Edelman, who popularized the iconic ballet flat. The evening?s keynote speaker was Major General Uri Bar-Lev, senior Israel police and public security attaché for North America.

Zeev Rotstein, director and CEO of Sheba Medical Center at Tel Hashomer, recounted the following: Last fall, one of Sheba?s doctors, Raz Somech, struggled to save the life of Mohammed Abu Mustafa, a 4-month-old Palestinian baby from Gaza suffering from a rare immune deficiency. The family had already lost other children to the disease, and a search for a bone marrow donor had proved futile. ?The family lived in Gaza,? said Rotstein. ?It [became] the theatre of the absurd.? After failing to to match up second cousins, a donor was found who had to be smuggled out of Gaza into Israel. The infant?s mother, Raida, was disparaged by her Gaza neighbors for having her son treated in Israel. So she blurts out that she hoped he?ll grow up to be a suicide bomber to help recover Jerusalem. In the middle of the treatment, the doctor is summoned for reserve duty in Gaza! The amazing story recounted by Rotstein was made into an award-winning film, ?Precious Life.?

In his address, Major General Bar-Lev, who lost a leg in the line of duty, spoke of the ?high price? Israeli soldiers pay and how ?an injury is a turning point in their life.? From 1985 to 1989, he was commander of the I.D.F.?s elite undercover counter-terrorism unit, Duvdevan. An international expert in the field of combating terrorism, global terror and eradicating crime, MG Bar-Lev has 20 years? experience in cooperating with foreign agencies in these areas. In his new position as Israel police and security attaché to the U.S. and Canada, he will work on strengthening international cooperation.

A Glass Half Full