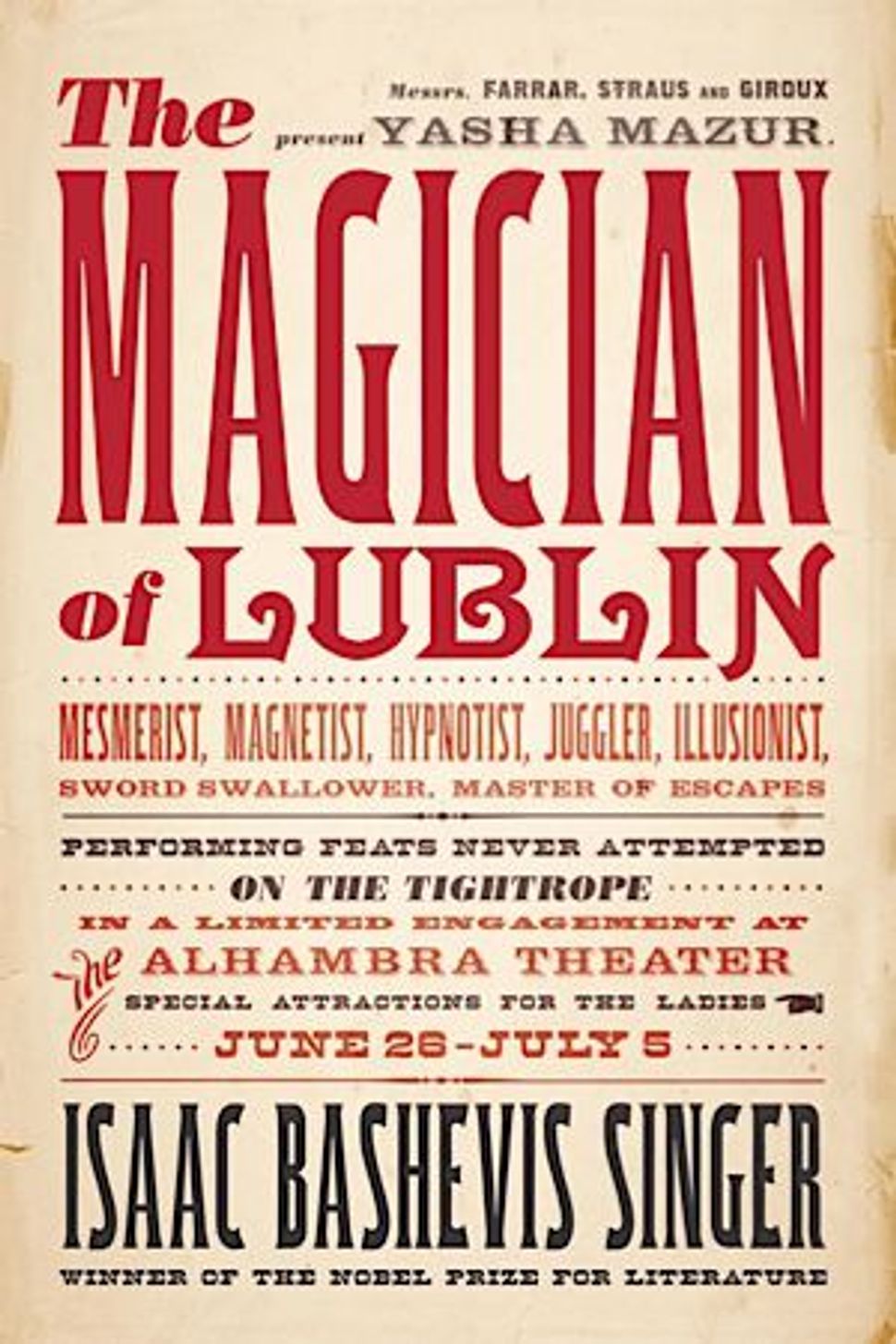 Below, a transcript of the conversation before and after the reading:

Nice to be here, Allison. 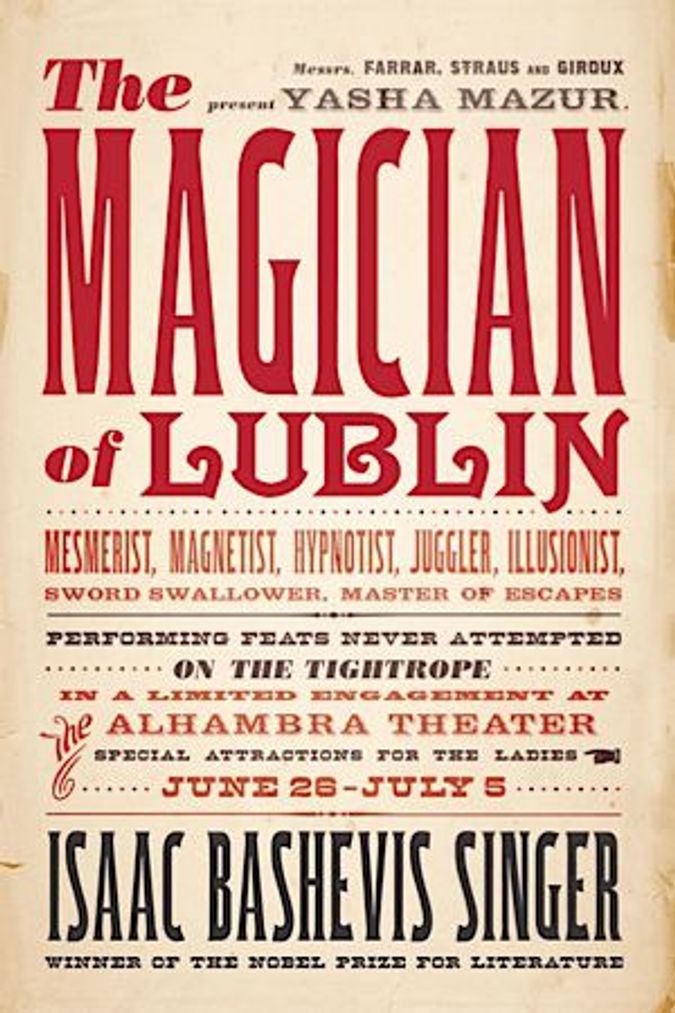 Well, I knew him fairly well because I had chances to work with him in theater when I was a kid. I played him, on the WEVD serialization of his autobiographical, ?In My Father?s Courtyard,? and that was an eight-minute episode, soap-opera-like, every week. And I would meet him at the corner of 86th Street ? now Isaac Bashevis Singer Boulevard ? and we?d go downtown in a taxi to the WEVD studios.

We did it live. It was directed by my uncle, Tzvi Schooler, a big star of Yiddish radio. Later in life, I worked with him on his play, ?Schlemiel the First,? which I staged up at the Yale Repertory Theatre. But I helped him smooth out a rough English translation that others had done, and then I wrote five songs, lyrics for songs for that production. And over the years, I kept nagging him, let?s do a triptych of three of your great stories for Broadway. Because he had never been on Broadway then; it was pre-?Yentl.? And he kept assuring me, ?Yes, yes, we?ll do this, we?ll do this.? And we never got around to it, actually. He was too busy with his deadlines for Playboy, for The New Yorker, so after his death, I was commissioned by the Harry Ransom Center in Austin, Texas, where his archives are, and that was my chance, at last, to put together something. The full title is ?Dreamers and Demons: The Three Worlds of Isaac Bashevis Singer.?

?The Magician of Lublin,? is a novel that takes place in Poland in the 1870s, and it was originally translated from English to Yiddish and published in 1960. Why is it such a vastly important novel in the Jewish literary canon and the American literary canon?

Well, I?m not enough of a literary critic or expert to know the answer to your question, Allison. But I think it?s an important novel because it?s a very colorful and emotionally powerful one. Yasha Mazur, the magician, so to speak, of Lublin, is a deracinated Jew. He?s alienated from his Jewish background. He has a Jewish wife. He has various gentile mistresses. He has other groupies and roadies as he goes around his circuit of Poland, doing his magical tricks and acts. He?s kind of like a mixture of Houdini and Mick Jagger and who knows what else as he travels about. And Singer just depicts a whole world, and also his own inner struggles with the possible non-existence of God and what in the world he can believe in.

There?s something very modern about these struggles.

So let?s hear about Yasha Mazur.

[Isaiah Sheffer reads Chapter 1 of ?The Magician of Lublin.?]

It?s a great last line, and a great last image of him with his wife, in this sexless marriage, before he resets out on the road to make up for all that.

And staying put and wandering. But a lot of it is Singer himself. He wonders about the minutia of lime. He crumbles a piece of stone and lime and wonders, if it gets smaller and smaller, is it still lime? What are atoms? What is electricity? How can it be? Though he?s a non-believer, he believes in some God. But not a God who ever speaks to him or to anyone else. I have a quote where someone asked him, so, Mr. Singer, have you ever had a supernatural experience yourself? And he says, well, honestly, no. But I know people who have! So he keeps it alive while not claiming to have had any such experience.

Singer worked as a journalist here at the Forward, and he always wrote in Yiddish. All of his work was translated into English. It?s been said that the Yiddish versions of his work are more meandering, and the English translations are more direct.

He felt very lucky to have Saul Bellow translate ?Gimpel the Fool.? And that is the story that brought him to a wider English-speaking audience, when that was first published. I once asked him about Bellow.

Is it true that he fired Bellow as a translator?

I don?t know that he fired him; he never hired him. I think he didn?t have him do more of them. He had a circle of mostly attractive young women who were his translators. One of them, Marion Magid, who was a Commentary editor, would do a funny takeoff on how Bashevis really, after a certain point, he knew many of the questions that translators would ask of him. So that, for example, she would ask him, ?Mr. Singer, what is this one word, spelled in Yiddish, shin daled ??shed?? And he would reply, and she would do his Yiddish accent, ?Vell, for this shed, you could have ?imp,? ?elf,? ?hobgoblin,? ?goblin,? ?homunculus,??sprite,? ?dwarf.?? He would have a long list, a thesaurus of possible translations of the word shed. And he had been in New York? he wrote more of his work in New York than in Warsaw. But he still needed a translator, he felt.

How did he capture the imagination of English readers, of readers in New York, this Yiddish writer and his writing?

By the vividness of the stories. The stories often had violence and lust and anger and exoticism. Singer?s critics would say too much exoticism, but others don?t feel that way at all. His novel, ?The Slave,? for example, that could be an Ingmar Bergman movie. It should have been ? one of the great things that didn?t happen but could have in this world.

I don?t know that it did. Those who knew the story ?Yentl? did not think much of that movie. Singer himself did not think much of that movie, although it was ungracious of him, I think, and a lot of people think, to have accepted her purchase and her money and then to do his famous trashing of the movie on the front page of the Arts and Leisure section. That was a little ungracious of him. But I don?t think it?s a good movie. It misses the heart of the matter in Yentl?s transformation of herself, and becomes a Streisand vehicle.

Yasha is half Catholic and he?s half Jewish, and he?s seduced by baptism in the West, and there are these themes. What do you think Singer was getting at there?

He was fascinated by the idea of the person who?s in the middle ? the outcast, the searcher, the one trying to find his way.

And the one who can also perform tricks.

Yes. It?s funny, the other great Jewish character in literature that is a large part of my life ? Leopold Bloom, the hero of ?Ulysses? of James Joyce ? he, too, has been baptized a couple of times underneath a water fountain and by the boys in his class. So, the Jew that gets baptized becomes a wandering Jew, a wandering figure.

What?s it like for you to come back to this material after a long time?

Well, it lives with me. I live a few blocks from Isaac Bashevis Singer Boulevard, and I have his picture up over my desk. It?s not a grand return; it?s a steady thing in life, even when I?m not working on it in particular.

If you were going to chart a path for a novice to Singer?s work ? if you were to recommend where to start? ?

I would say, pick up one of the collections of short stories first. I think the pathway is, jump in. He?s well translated. A lot of his stuff is available. Just leafing through old Playboy magazines you can come upon good Singer stories, many of which were collected then in volumes. So I?d say, just my advice is, jump in.

Isaiah Sheffer, thank you for reading to us.

Thank you for having me here in this lovely studio here in the new Forward.