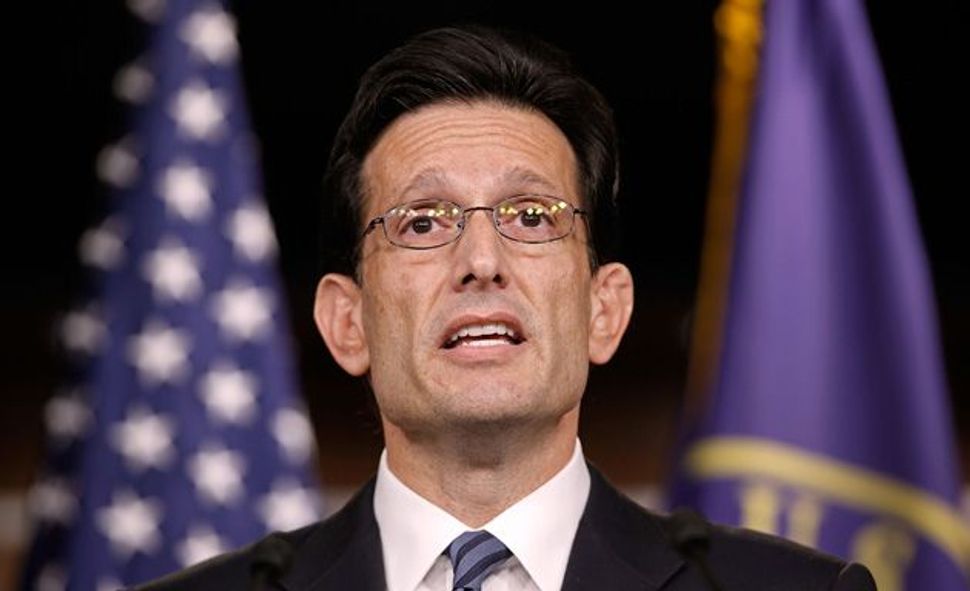 Rising Power: In an interview, Rep. Eric Cantor suggested approving aid to Israel separately from the rest of the foreign aid budget. Republicans now say the comment was over-hyped. Image by GETTY IMAGES

Virginia Republican Rep. Eric Cantor has provoked heated reaction with his proposal that American assistance to Israel be taken out of the annual foreign aid bill and be passed separately, on its own — a suggestion that appeared to telegraph his party’s intention to significantly reduce foreign aid now that the GOP has gained control of the House of Representatives.

The roughly $3 billion a year provided by the United States for Israeli military purchases is a product of years of formal negotiations and backroom tweaking, and tinkering with it raises concern among pro-Israel lobbyists. Moreover, raising the issue as Cantor did, days before the election, is viewed as breaching the bipartisan support for aid to Israel, which traditionally translates to an easy passage of the bill in Congress every year.

Cantor initially presented his proposal in an October 24 interview with JTA and said it was meant to protect aid to Israel from possible cuts that aid to other nations could face after the GOP takes over the House. Cantor, the only Jewish Republican in Congress, is expected to become majority leader.

“I’m hoping we can see some kind of separation in terms of tax dollars going to Israel,” said Cantor, who noted that a GOP-led House could seek to deny funding from countries that are deemed not to share American interests, even if that means voting against the entire foreign aid legislation.

But what was initially presented as an effort to secure aid to Israel from changing winds in Congress created a thunderstorm on all sides, leading Republicans to begin gently to backtrack.

Democratic lawmakers, mainly those who are involved in the foreign appropriations project, lashed out at Cantor’s proposal, while also seizing on the opportunity to make a last-minute election statement.

“This threatens foreign aid to Israel,” Florida Democrat Debbie Wasserman Schultz said in an October 29 conference call organized by the National Jewish Democratic Council. She argued that separating aid to Israel from America’s entire foreign assistance package would be a “tremendous disservice” to Israel and could cause it to “dry on the vine.”

Her House colleague Steve Israel from New York added that he is concerned about how the new Tea Party Republicans will vote on foreign aid, since many of them share a belief that cutting government spending also requires making cuts in foreign aid, even though this aid comprises only a tiny fraction of the federal budget. “Cantor knows what the consequences of having these extremists join the Republican caucus will be, and that is why he is floating this trial balloon,” Israel said.

But while Democrats took direct aim at Cantor’s approach, presenting it as a sign of Republican insensitivity to Israel’s needs, players on the receiving end reacted cautiously. Jonathan Peled, spokesman for the Israeli Embassy in Washington, said Israel is “examining” the proposal. “We are in listening mode,” Peled said, adding that Jerusalem has yet to hold discussions on this issue.

“For decades, annual U.S. foreign assistance to Israel has been one of the most tangible expressions of American support for Israel and our country’s national security interests. A robust foreign aid budget is a strong signal of U.S. leadership around the globe,” spokesman Darren Mackoff said. The AIPAC statement added, however, that “Congressman Cantor has always been, and continues to be[,] a strong leader on the vital issues surrounding the United States and Israel, as well as an ardent supporter of U.S. foreign aid.”

Israel has received more foreign aid from the United States than any other country has after World War II. From 1976 to 2004, according to a recent report compiled by the Congressional Research Service, it was the largest annual recipient, although Iraq has since taken first place.

Financial aid became a major bilateral issue for Israel and the United States after Israel signed its first peace accord with Egypt. Wishing to promote security and stability in both countries, and as a signal that taking risks for peace pays off, the United States began providing both Israel and Egypt with significant foreign aid, on a basis of A 3:2 ratio in favor of Israel. The aid has since evolved, as the civilian assistance portion of it was gradually phased out. Since 2008, Israel receives only military assistance, which will reach $3 billion in 2011. In addition to the military aid, which comes from the State Department’s foreign operations budget, Israel receives aid for specific programs through the Defense Department’s budget. These programs include American participation in the funding of several missile- and rocket-defense systems.

Throughout the years, AIPAC’s lobbying efforts added other perks to the aid package: Israel is the only recipient allowed to spend a portion of its military aid on purchases within the country; usually this kind of aid is designed for procurement of American-made weapon systems. Israel also receives its aid in the first month of the fiscal year as a deposit in an interest-bearing account. Aid to all other recipients is spread out throughout the year.

Separating aid to Israel from the foreign aid bill could require renegotiating the terms of the aid and would require lobbyists to build a new network of ties with the new committee that would be put in charge of this issue.

But the major criticism of Cantor’s idea is that separating aid to Israel would make the country more vulnerable, since Israel would no longer be part of a universal cause of aiding America’s allies. Further down the road, one activist warned, this could backfire.

The strong opposition to Cantor’s idea seems to have caused Republicans to recoil. A newsletter sent out by the Republican Jewish Coalition carried the message that Republicans were not planning major changes to the foreign aid budget.

“There is nothing wrong with contemplating changes in the organization of Congress’s appropriations panels,” the RJC newsletter stated. “Nevertheless, after conferring with top-level staff at the Whip’s office, our best information is that the press hyped Cantor’s somewhat off-the-cuff comments into something more than intended, i.e., a trial balloon.”

Cantor’s office did not respond to questions from the Forward regarding his views on aid to Israel.