All Conversions Now Under Review in Israel as Crisis Escalates 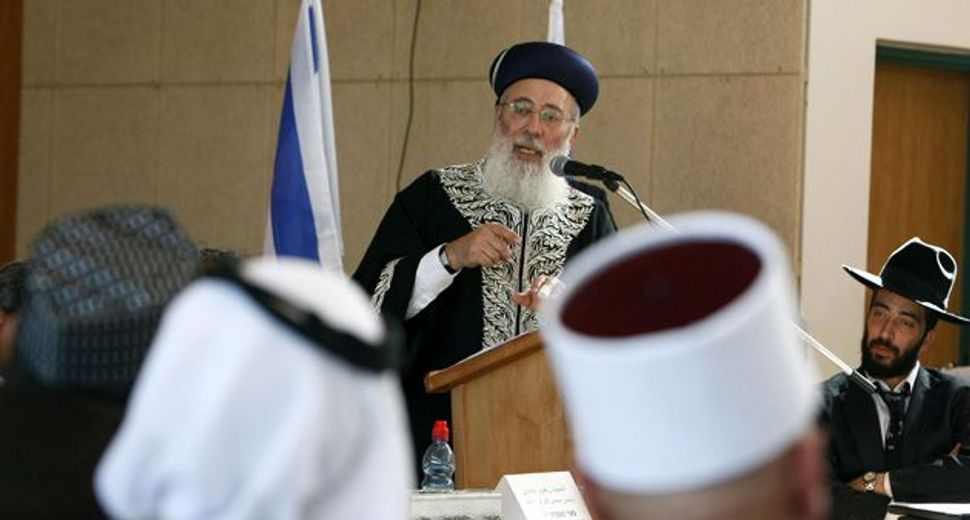 Israel’s Chief Rabbinate has hoisted a question mark over the legitimacy of all conversions performed in the country since at least 1999.

This constitutes the deepening of a crisis that began on September 6, when a representative of Israel’s Attorney General raised doubts about the legitimacy of conversions performed under the auspices of the country’s military.

Initially, it looked as if the Chief Rabbinate was going to nip the crisis in the bud by declaring that whatever procedural problems the Attorney General’s office had uncovered, it stands behind the military conversions. But in an apparent about-turn in late October, it has ordered a review of all conversions — not only military but also civilian.

“It’s expanded the mandate of what it was asked to do,” Orthodox rabbi Seth Farber, founder and director of ITIM, a not-for-profit organization that advocates on behalf of converts, told the Forward, referring to the Chief Rabbinate. “This is a very worrisome development.”

The new uncertainty threatens the conversions of thousands of immigrants to Israel from the former Soviet Union and their children, in particular. Many of them qualified for Israeli citizenship under the Law of Return, which allows anyone with one Jewish grandparent to come to the country and become a citizen. That standard, however, does not satisfy the Chief Rabbinate, which presides over personal status issues such as marriage and divorce in Israel. Without a formal and accepted conversion, many immigrants from the former Soviet Union who are not Jewish according to Orthodox Jewish religious law encounter obstacles to getting married, divorced and even buried in a Jewish cemetery.

It was widely believed that Amar would solve the problem by giving his wholesale approval to all military conversions performed to date, and simply request that all future military cases pass his desk, as do the civilian conversions. On September 16, he appeared to be moving in that direction, releasing a statement which gave credence to military conversions.

“The chief military rabbis acted in full cooperation with the chief rabbis of Israel, in all matters pertaining to religion and state,” Amar wrote then. “Soldiers who converted in these conversion courts were also wed in keeping with the halacha for many years by marriage registrars, in accordance with all religious standards.”

But Amar — one of the religious leaders who helped to establish the military’s conversion program — stopped short of actually saying that the conversions should be deemed valid. He instead turned this question over to the chief rabbinical council, the Chief Rabbinate’s executive management committee.

“It seems that the procedure any time an issue is raised is to form a panel to look into the issue rather than [senior rabbis] dealing with it,” Andrew Sacks, director of the Conservative movement’s Rabbinical Assembly in Israel, told the Forward. He accused the Chief Rabbinate of seeking to evade its responsibilities.

Ironically, this saga began with a petition to a secular court that was meant to ease the problems faced by converts. Farber, the ITIM director, had asked the court to end the situation whereby some hard-line local rabbis who consider conversion standards too lax refuse to issue marriage licenses to converts who come to them for marriage registration. The local rabbis issue such licenses in their capacity as local agents of the Chief Rabbinate.

Until now, the Chief Rabbinate had stood by the Conversion Authority’s conversions. But its deferral of the issue to a special committee with a charge of looking at all conversions gives a boost to ultra-Orthodox rabbinic leaders seeking to cast doubt on the Conversion Authority’s actions. Representatives of the Chief Rabbinate declined to discuss its decision-making process with the Forward.

In a worst-case scenario for converts, the committee could conclude that every convert should be checked to evaluate whether he or she is traditionally observant, as the convert was required to pledge when he or she converted. For some time now, hard-line individual marriage registrars have been probing the level of traditional observance held to by converts and refusing marriage certificates when they are dissatisfied. A similar decision by the special committee could make this scrutiny national policy across the rabbinate and cast doubt on all conversions performed by the state-run Conversion Authority.

Lawmaker David Rotem, chairman of the Knesset’s Law Committee, told the Forward he plans to stop the Chief Rabbinate’s plan. He has submitted a new bill that would deem the military conversions legally valid whatever the Chief Rabbinate claims and despite any objections of the State Attorney. But for Israel’s Haredi, or ultra-Orthodox, leadership, the latest development is a triumph — and the result of a high-profile campaign against what its media routinely call “false conversion.” When it looked like Amar might back military conversions, Yated Ne’eman, a newspaper of the Haredi establishment, described this as “another worrisome move toward granting this fraudulent apparatus a seal of approval and enabling thousands of non-Jews to be assimilated into the Jewish people under the guise of Jews, after receiving a fictitious ‘conversion certificate’ not worth the paper it’s written on.”

All Conversions Now Under Review in Israel as Crisis Escalates