At New Museum, an Inventive, if Incomplete, Paean to Freedom 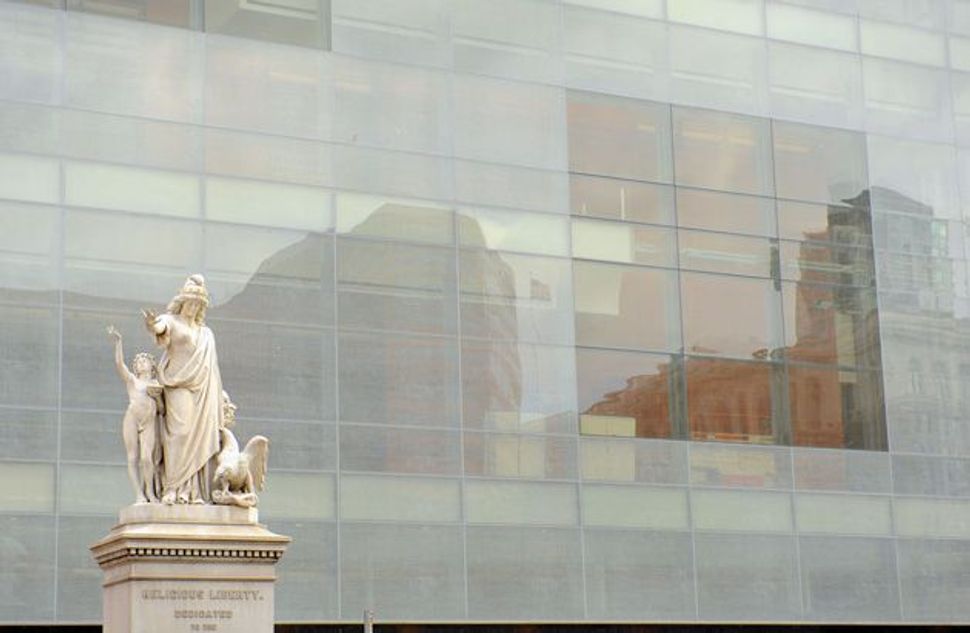 Outside the National Museum of American Jewish History. (Photo by Peter Tobia)

Freedom is the grand theme of the new National Museum of American Jewish History, which is set to open its doors in November. In a way, the museum’s location demands that it engage with such a large, universal concept. It is housed in an imposing glass box in the center of Philadelphia, with a commanding view of the grassy mall that stretches from the National Constitution Center to the red brick edifice where the Declaration of Independence was signed in 1776. This is not the Lower East Side.

The desire to be “in conversation” with these surrounding pillars of American history extends to the permanent exhibit itself, which takes up three of the five floors in the museum, corresponding to three distinct historical periods. Each starts off by illustrating a historical shift that speaks to the larger national experience, one that is by no means unique to Jews in America.

The opening section of the exhibit that fills the first floor, “Foundations of Freedom” (1664–1880), begins with the colonial era and the Revolutionary War, a large musket greeting the visitor. The exhibit on the second floor, “Dreams of Freedom” (1880–1945), introduces the massive immigration waves of the late 19th and early 20th centuries, with Jews described as 2 million of the 20 million who arrived. The last, and slightly smaller, floor of the exhibit is titled “Choices and Challenges of Freedom” (1945–Present) and uses suburbanization and its consequences in order to set the tone for the postwar era.

As an introduction to American history, then, the museum offers a sweeping and engaging tour. It’s also outfitted with all the multimedia and visitor-centric elements that history museums have embraced over the past decade. In addition to physical objects, sound fills the space, in the form of recorded readings or music. Computers and videos with interactive programs also abound — from the testimonies of Jewish soldiers in World War II to a screen that allows you to view and upload photos from your Jewish summer camp experience. And the museum is self-consciously family-friendly. In the section that describes the westward movement of some Jews, there is a wagon to climb on; and to get a feel of 1950s Jewish America, kids can play in a fully outfitted suburban kitchen.

In addition to embedding the Jewish story firmly within the larger American narrative, the curators have worked hard to avoid the triumphal tone of ethnic achievement that could have easily turned such a museum into no more than an exercise in kitsch. And they have, for the most part, succeeded. Pride is, generally, tempered with reality. So there is no avoidance of the Jewish role in the Confederacy, illustrated here by a fascinating artifact: a Confederate $2 banknote bearing the face of the Confederate’s Jewish secretary of state, Judah Benjamin.

There is no shying away from the passivity of those American Jews during World War II who sought a “quieter approach” to help their brethren. Though there is a room dominated by the singing of Bob Dylan and Simon & Garfunkel and devoted to the Jewish role in the movement for civil rights (as well as to the feminist and Soviet Jewry movements), there is also mention of those who weren’t too keen on protesting. Even American bar and bat mitzvahs are described as “endearingly remembered but sometimes criticized for their extravagant opulence.”

And there is an effort to offer alternative narratives of the American Jewish past. Jewish mobsters like Arnold Rothstein get their due. The section next to the one on tenement living treats Jews from more rural settings, like the immigrants who came through Galveston, Texas. There are also surprising artifacts to this effect, like the sheath of the knife of a 19th-century schochet, or ritual slaughterer, which is decorated with an American flag.

Some subjects, though, remain perplexingly untouched. Most glaringly avoided is the complex role that Israel has played in American Jewish identity over the past century. The birth of the Jewish state, which was not universally applauded in America, is painted largely as an unmitigated celebration for the community. The only references made to the tension and challenge that Zionism presented to Americans are two quotes that frame a video loop of the United Nations announcement proclaiming Israel to be a state. David Ben-Gurion’s declaration stating, “Our next task consists of bringing all Jews to Israel,” floats about the words of Jacob Blaustein, president of the American Jewish Committee: “To American Jews, America is home.” The issue is explored no further. The way that Israel has divided parts of the Jewish community following the Six Day War is similarly absent— though this has been no small part of American Jewish life.

A serious consideration of religion is also lacking. Only the slightest reference is made to Hasidism, for example, despite the fact that it constitutes arguably one of the most potent religious forces in American Jewish life today. It’s not that the history of faith or of the changing forms of practice is completely ignored. The origins of the various denominations are laid out — particularly the shocking “Trefa Banquet” of 1883, the first rabbinical ordination of the Reform movement’s Hebrew Union College-Jewish Institute of Religion, where frogs legs and shrimp were served. There is also a beautiful film that shows off some of the more interesting Modernist synagogue architecture of the 20th century. But there is no real exploration of how American Jews have, in large part, moved away from religious practice or of what this says about the community.

The absence of religion is not surprising, given the largely secular focus of Jewish achievement described here. It is striking — and perhaps a little depressing — that the last room of the exhibit exploring the freedom finally won is a collection of pop culture created by Jews. Barbra Streisand’s 1977 album, “Superman,” is displayed behind glass. And playing on the same video screen in a loop is a clip from the sitcom “Seinfeld,” as well as Adam Sandler performing his “Hanukkah Song” and Sarah Silverman doing her lewd standup comedy act. Meant as a final exclamation point to the story, the clip does more to prompt the question: Is this the reward of freedom — Babs and the Soup Nazi shtick?

Freedom is a self-consciously loaded theme, and though the last era explored bears the title “Choices and Challenges of Freedom,” there is nothing in the exhibit to indicate the deep anxiety that has accompanied integration into American life. What did Jews lose as they became Americans? Did this freedom have its costs?

After all, freedom in the American context also includes the freedom not to be Jewish. The arc described by the exhibit would, in the eyes of some American Jews — like those neglected Hasidim — seem one of disintegration, a swift departure from the source of identity. Besides a final interactive section in which visitors can answer provocative questions such as “Are Jews white?” by writing on a sticky note that is then scanned in and projected on a screen, there is not much space devoted to the downside of this unfettered liberty or even to how long Jews will maintain a hyphenated identity in America.

This, however, doesn’t take away from the achievement of the museum. It is clearly meant to be more wide-ranging and comprehensive than profound or probing. It offers a fascinating breeze through the Jewish experience in America, but one that is very consciously presented as an exemplar of the immigrant experience as a whole. Even if the decision to skew toward the universal and away from the particular involves the sacrifice of some complexity and of some uncomfortable questions, this choice allows the museum to earn its place on Independence Mall. The new museum is in fact a fitting continuation of the story of those principles enshrined in the founding documents, showing us what they actually meant for those who made their home in America.

Editor’s note: An advertising supplement about the new museum, inserted in this week’s paper, was produced independently of the Forward editorial department.

At New Museum, an Inventive, if Incomplete, Paean to Freedom