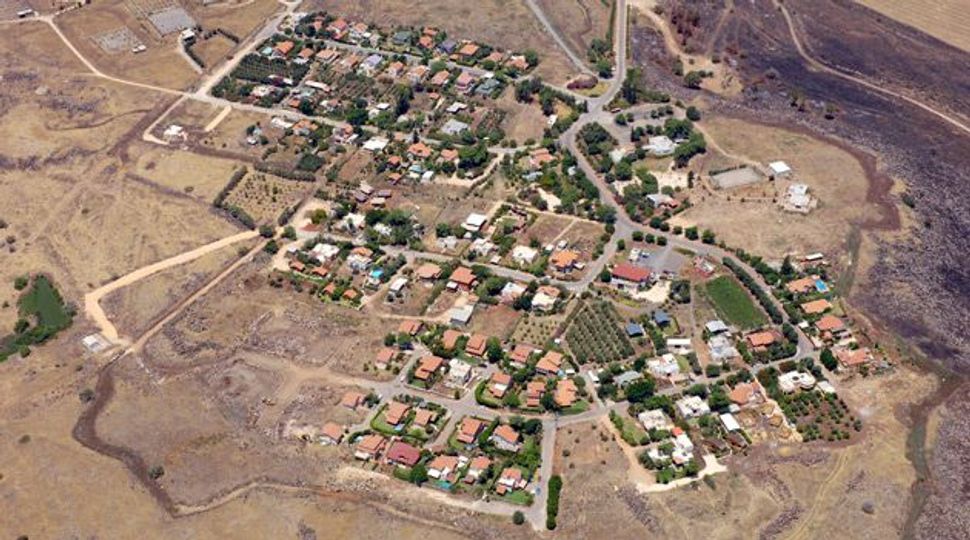 Choosing Neighbors: Kfar Zeitim is an example of a moshav, or cooperative village, in which absorption committees determine who can move in. Image by ISRAELI GOVERNMENT PRESS OFFICE/MOSHE MILNER

Israel is poised to enshrine in law the right of some villages to handpick residents, following the advance of legislation that some decry as carte blanche for ethnic discrimination.

The Knesset Law Committee has approved a bill that protects the right of communal villages of 500 or fewer families to select residents by using the criterion of “social suitability.” The bill, approved by the committee at the end of October, is expected to pass its final hurdle into the statute books via a Knesset-wide vote in November.

The advancing bill is a counteroffensive against the potential application of an earlier Supreme Court ruling to a new judicial petition. Submitted by the Arab nongovernmental organization Adalah, this petition focuses on the right of Ahmed and Fahina Zubeidat, an Israeli Arab couple, to buy a house in the Galilee communal village of Rakefet. They were turned down on the grounds of “unsuitability.” Adalah is opposed to any locale selecting residents, and has sought to fight the practice in stages, starting with Israel’s 111 communal villages. The couple’s petition will be heard in December.

With some exceptions, Israel’s urban property market is open to all. But in certain smaller locales, residency is subject to the approval of a local committee. Israel’s kibbutzim, socialist cooperatives where the land is held communally, insist on carefully choosing their members via such committees. The situation is the same for the country’s moshavim, which are also cooperatives but to a less degree than kibbutzim. Israel also has a category of villages known as yishuvei kehillati, or communal villages — cooperatives on paper but where, to all practical intents, residents live independently.

Back in 2000, the high court ruled that that the State of Israel was not permitted to allocate state-owned land for Jewish-only ownership (though in contrast to many democracies with open housing laws, a November 7 court ruling seems to indicate that private developers may do so). But kibbutzim, moshavim and yishuvel kehillati continued to assess potential residents for suitability on the grounds of how well it was believed they would fit into the community.

Adalah’s attorney, Suhad Bishara, has voiced outrage at the Knesset bill. “This would be the first time that Israel sets segregation in law,” she told the Forward. But the bill’s initiator, Kadima lawmaker Israel Hasson, stressed that it specifies that committees cannot decide based on race, religion or nationality. He noted that to ensure this is not violated, there is an external appeals procedure. Hasson argued that it is fair for communal villages to define who suits their communities. “In small villages, you live with people with whom you very much have a share,” he told the Forward.

Adalah claims that absorption committees are a means to exclude Arabs without saying so. Bishara said that these committees hide behind “vagueness,” as “no one can explain what social suitability is.” The Association for Civil Rights in Israel takes a similar view. The committees “give a very wide opportunity to discriminate,” according to ACRI attorney Gil Gan-Mor.

Lawmaker Chaim Oron, head of Meretz, termed the bill “a dark law that tries to discriminate against citizens on the basis of their origin. As a citizen and as a democrat, and more importantly as a Jew, I’m hurt that we have come to this sad and ugly place.”

Defenders of absorption committees counter that the State of Israel was built on communities that unite around a shared vision — in some cases, a particular brand of Zionism, and in others a religious ethos. They believe that making the committees illegal would be an affront to residents’ rights. Hasson said that the bill, complete with the external checks it put in place, represents a “balance between the rights of the residents and the rights of people in the country to live wherever [they wish].”

Joel Golovensky, president of the Institute for Zionist Strategies, a think tank dedicated to Israel’s continuation “as both a Jewish and a viable democratic state,” said that critics of the committee ignore Israel’s culture of likeminded people living together, and view Israel as if its culture is the same as America’s. “I was educated in America, and it was very difficult for me to see how life in this respect is different here.” The committees, he said, “clearly separate people, like a million other things separate people, but I would not call it discrimination; I would call it empowering [for communities].”

Ron Shani, mayor of the Galilee municipality of Misgav, a cluster of 29 predominantly Jewish villages and six exclusively Arab villages, said: “The bill is nothing new to how we live in Israel and is certainly not discrimina tion.” He said that the committees are there to assess “the way you fit into a community and not where you come from.” A small number of Arabs — exactly how many is not known — do live in predominantly Jewish communal villages, while Jews deemed unsuitable are sometimes turned away. Shani cited this fact, arguing that critics “like to color everything black or white.”

Some academics are skeptical of Adalah’s claim that the committees are just a mechanism to exclude Arabs. Shlomo Getz, head of the University of Haifa’s Institute for the Research of the Kibbutz and the Cooperative Idea, an expert on Israeli housing, believes they are actually a means to another type of homogeneity — economic homogeneity. In his analysis, communal villages “consist of wealthy people who decided to move out of the city and often continue to commute to the city.” Committees “are mainly to keep it at that level of population,” he believes, while Arab applicants “are not excluded more or less than others.”