With McCain’s Spot on the Ticket Secure, Jewish GOPers Jockey To Win His Favor 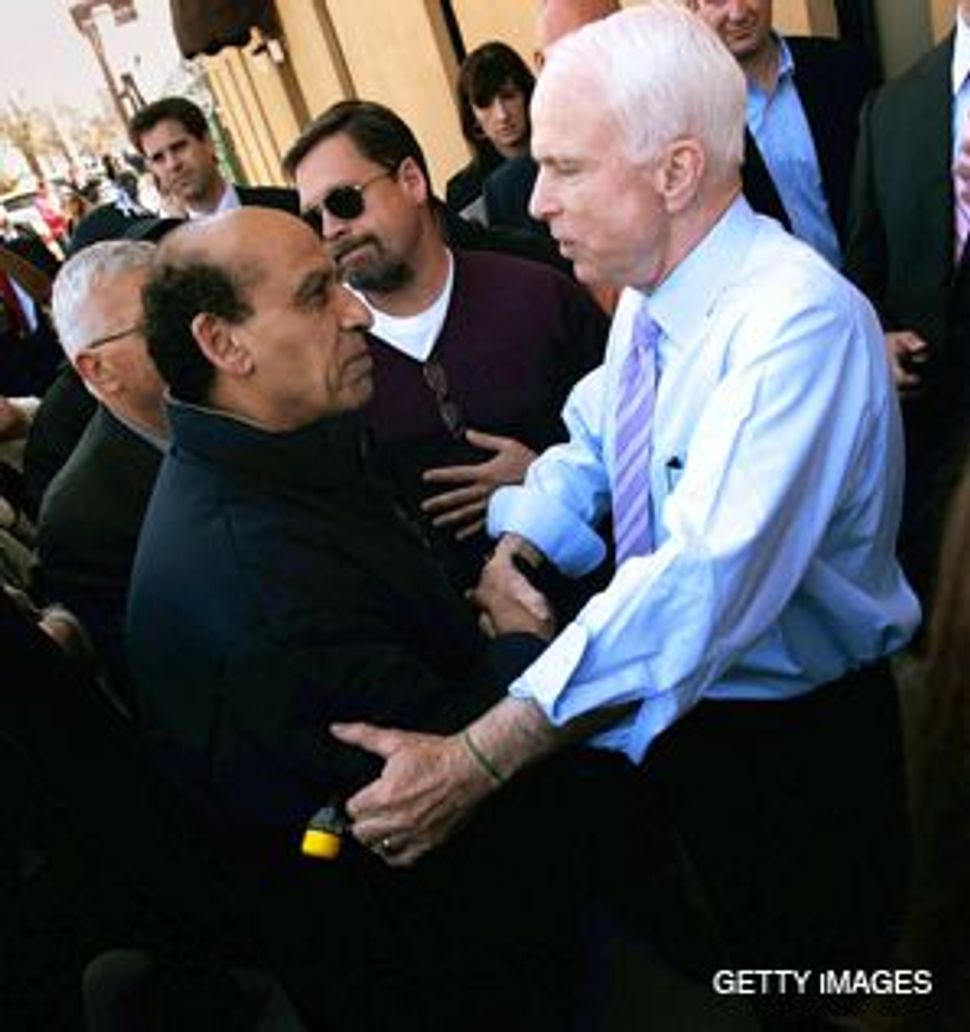 Lining Up: Those Jewish Republicans who had endorsed other candidates are now throwing their support behind McCain.

As the Republican Party coalesces behind presidential contender John McCain, Jewish bigwigs in the party are vying for influence in the campaign. 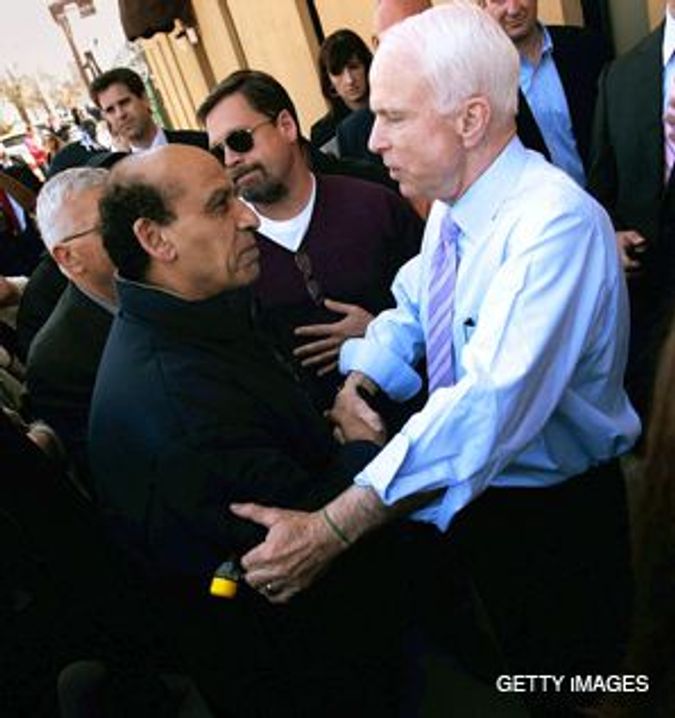 Lining Up: Those Jewish Republicans who had endorsed other candidates are now throwing their support behind McCain.

Currently leading the way is the House’s only Jewish Republican, Rep. Eric Cantor of Virginia — a rising party star who currently serves as chief deputy whip — who is raising funds for McCain and the Republican National Committee as the chair of the GOP’s 2008 Victory Jewish Coalition. The Jewish outreach effort is being co-chaired by Fred Zeidman, a Houston-based venture capitalist and perennial party heavyweight who chairs the U.S. Holocaust Memorial Council and serves on the board of the Republican Jewish Coalition.

One alleged casualty of the Cantor-Zeidman leadership team is New York developer Mark Broxmeyer, national chairman of the Jewish Institute for National Security Affairs. According to a person familiar with the campaign, Broxmeyer — a member of McCain’s national finance committee who previously had headed up McCain’s Jewish outreach — was “pushed aside” to make way for Cantor and Zeidman; a press release put out by the McCain campaign late last month announced that Broxmeyer would chair a Jewish advisory committee to the campaign.

While some longtime McCain backers have seen their stars rise within the campaign, other Republican heavyweights who previously backed McCain’s rivals have been making up for lost time with the Arizona senator, including St. Louis businessman Sam Fox, who was originally a supporter of Mitt Romney, and New York real estate developer George Klein, a major backer of Rudy Giuliani.

Much of the current jockeying underscores the typical competition for influence that occurs among deep-pocketed party insiders. At the same time, it reflects some long-simmering tensions between Jewish factions of the Republican Party, including the RJC — which was founded in 1985 and bills itself as “the sole voice of Jewish Republicans to Republican decision makers and the Jewish community” — and the Republican board members of various nonpartisan pro-Israel organizations and political action committees. During the 2004 campaign, several Washington insiders told the Forward, the RJC competed with board members from the nonpartisan American Israel Public Affairs Committee for influence within the Bush operation, with the campaign ultimately choosing Aipac activist Michael Lebovitz as its head of outreach to Jewish voters. While no official liaison has been named as of yet in the McCain campaign, one New York GOP operative not aligned with either camp said he believed that the same sense of competition has begun to tinge the 2008 race.

“There’s a lot of elbowing going on right now to determine who’s going to be in charge of McCain’s Jewish campaign — the RJC or Aipac,” the Republican operative said.

At this stage of the race, Jewish activists are focusing the bulk of their efforts on fundraising. While Democrats remain absorbed with their own bruising primary battle, the GOP is struggling to make up lost ground in the money hunt, due to a combination of generalized malaise within the party and the Arizona senator’s well-known aversion to stumping for funds. In March, the first full month after McCain effectively secured the nomination, the senator’s haul was just $15.4 million, while Democratic frontrunner Barack Obama amassed $41 million, much of it from smaller donors who can be tapped again.

During this critical juncture, a number of prominent Jewish Republicans are emerging as linchpins in McCain’s fundraising effort and competing for potential dividends come November.

“I think it boils down to who can raise the most amount of money, in the most efficient manner, in the least amount of time,” said Ezra Friedlander, a Hasidic Republican activist. “You’re talking about a candidate that is now under-funded, and money is what’s going to generate the greatest number of thank-yous.”

A number of Jewish Republicans — many of them closely linked to the RJC — are playing critical roles in the GOP’s 2008 fundraising drive. Beyond Zeidman and Klein, fellow RJC board members Lewis Eisenberg and Wayne Berman were appointed last month as chairman and deputy chairman, respectively, of the RNC’s “Victory” campaign, aimed at bolstering McCain in the general election. The effort is critical because McCain is likely to accept the $84-million federal grant to run his general election campaign, and in that case will seek to achieve parity with the Democrats by relying on funds from the RNC — which can accept up to $28,500 in individual donations, versus the $2,300 cap faced by candidates.

“When the wheels fell off McCain’s campaign last summer, and McCain was flying Southwest Airlines, Wayne was one of the guys sitting next to him,” a Washington insider said of Berman. “He’s very much in the kitchen cabinet when it comes to all the big issues that campaigns need to think about.”

In the view of some observers, the drive to become part of McCain’s inner sanctum may have been a factor underlying a recent kerfuffle involving a recent breakfast for McCain fundraisers that was originally scheduled to be held at Manhattan’s Harmonie Club, a largely Jewish locale that has been criticized for lacking minority members. In 2001 the venue drew negative publicity when New York City Mayor Michael Bloomberg resigned his membership over a lack of black and Hispanic members, and in the years since, a number of politicians, including Democratic presidential candidate Barack Obama, have avoided appearing at the club.

After New York newspapers drew attention to the original location of the breakfast, the event was subsequently moved to the St. Regis Hotel, where some 50 fundraisers from around the country met on May 5 to talk strategy and to hobnob with such party leaders as Cantor, Zeidman and former Bush spokesman Ari Fleischer.

Still, when it came time for assigning blame for the mishap, some pointed the finger at Klein, who is working overtime for McCain after previously backing Giuliani, and was seen by many as the mover behind the breakfast. Several New York party operatives who are generally outside the orbit of Klein and the RJC asserted that the mishap might have been prevented had they been brought into the event, which they alleged was focused mainly on the RJC and originally did not include several prominent Bush fundraisers who are not members of the organization.

In the wake of the event, Zeidman told the New York Jewish Week that he and Cantor had “no idea” that the club was controversial. He also said that the breakfast had been planned by Klein. Though Klein declined to comment, an aide in his office said that Klein had told her he “understood that the McCain people reserved all the venues.”

With McCain’s Spot on the Ticket Secure, Jewish GOPers Jockey To Win His Favor