Chasen Was a Hollywood Story, in Life and Death 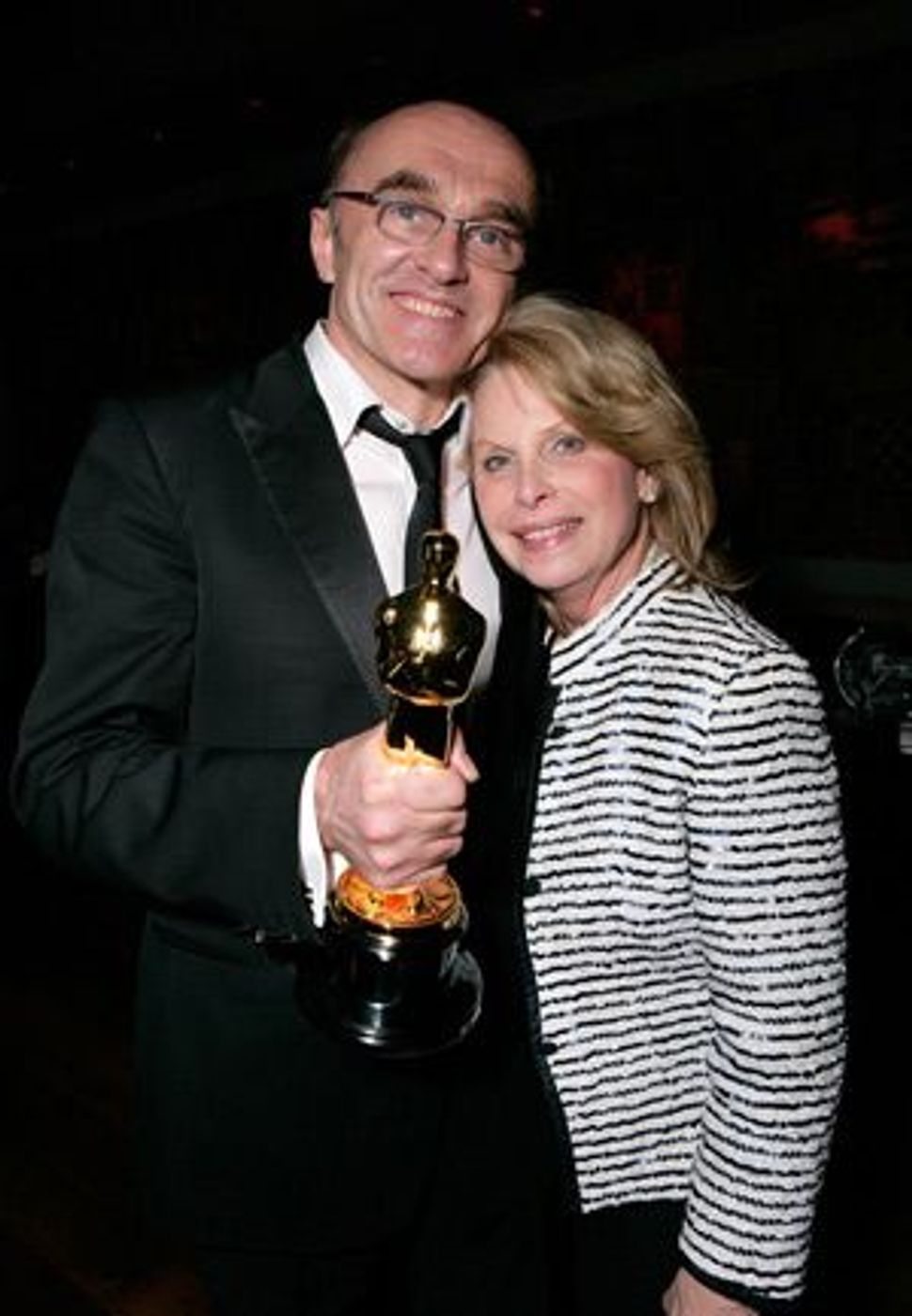 Publicist to the Stars: Ronni Chasen (right) and her client Danny Boyle, director of ?Slumdog Millionaire,? pose with his Oscar in 2009. Image by GETTY IMAGES

One time at the Ghent Film Festival, blond-haired and blue-eyed movie publicity maven Ronni Chasen overheard an anti-Semitic remark from an organizer of the festival. She went up to him and announced, “I’m Jewish,” in her unmistakable Bronx accent. The offender was stunned — and he apologized. 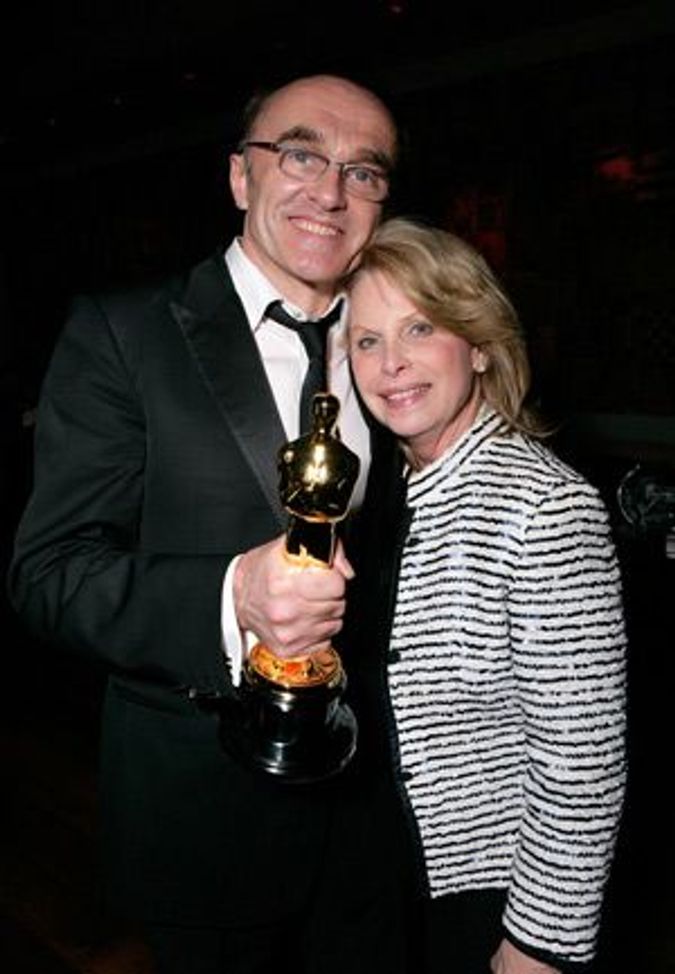 Publicist to the Stars: Ronni Chasen (right) and her client Danny Boyle, director of ?Slumdog Millionaire,? pose with his Oscar in 2009. Image by GETTY IMAGES

“That was her. She was very proud of her heritage and who she was,” said Rabbi David Baron, recalling for the Forward a story he’d told while conducting the funeral of this Hollywood fixture on November 21. “She was elegant — but blunt and direct.”

Baron, rabbi of Beverly Hills’ Temple of the Arts, with which Chasen was involved for 20 years, is one of many friends and colleagues still reeling since Chasen, 64, was found by police in the early hours of November 16, dying of gunshot wounds in her crashed Mercedes, the gruesome details providing forensic fodder for the nightly newscasts.

Chasen was a Hollywood insider’s insider whose 40-year career as one of the film industry’s top publicists was all about getting out the story. Now her own story — how a Jewish girl from the Bronx rose to the pinnacle of her profession, only to end up riddled with bullets on a Beverly Hills street — is a Hollywood murder mystery. It has the Beverly Hills Police Department working around the clock, and Chasen’s Hollywood colleagues in shock.

The publicist’s sudden passage also throws into relief the Tinseltown trends she promoted and epitomized. She was part of a wave of film machers who came west in the 1960s and ’70s — mostly from New York, and many of them Jewish — and created in the vacuum of the disintegrating studio system a new breed of independently produced films. Chasen publicized many of them, over time refining ways of improving their chances at the Oscars. Because of the Academy of Motion Picture Arts and Sciences’ intricate rules (which disallow outright lobbying of members), the task required art and ingenuity — both of which Chasen eagerly supplied.

A habituée of the red carpet in her perfectly coiffed golden bouffant, Chasen was a spokeswoman for top filmmakers, a key strategist for producers seeking Oscar gold, and a “hand-holder” to the likes of John Travolta and Michael Douglas — an important role here, where stars need someone to schedule and prepare them for interviews, guide them along red carpets and more. Journalists covering the movie business all knew Chasen: they either chased her for stories they needed or were chased by her for stories they often didn’t need but would write anyway. Chasen had even invented a whole new category of story: about the film music composer as star, orchestrating the campaign that won Hans Zimmer an Oscar nomination for his score for “Driving Miss Daisy.” She soon corralled nearly every important soundtrack composer onto her Chasen & Company roster.

Chasen’s clients included such producers such as Irwin Winkler, Mace Neufeld and Arnold Kopelson, part of the late-20th century generation of producers turning out quirky movies like “They Shoot Horses, Don’t They?” passionate films like “Raging Bull” and “’Round Midnight,” and blockbuster star vehicles like “Rocky” and “The Hunt for Red October.”

“We were part of the great change-over,” Winkler said over the phone from New York the day after a star-studded tribute to Chasen at Hillside Memorial Park in Los Angeles, where she was interred beside her mother. Winkler was referring to that period in the ’70s, when Chasen arrived in town, that many view as a golden age of independently produced film.

Publicity for B-movie studios and schlock horror pictures written and directed by her older brother, Larry Cohen (such as the 1974 film “It’s Alive”), were Chasen’s first Hollywood chores. She went on to work for PR ace Warren Cowan and served a studio stint as MGM’s publicity chief.

But Chasen’s real niche was devising and executing the arcane strategies that persuade members of the Academy to select winners from each year’s batch of Oscar nominees. “On Golden Pond” (1981) was her first big triumph, earning 10 nominations and winning three Oscars, including best actor and best actress, respectively, for Henry Fonda and Katharine Hepburn. Another Chasen crusade nabbed nine nominations for “Driving Miss Daisy,” the 1989 movie about an elderly Jewish woman and her African-American chauffeur, and captured four Oscars, including best picture. More recent beneficiaries of Chasen’s campaigns, out of more than 100 winners, included “The Hurt Locker,” “Slumdog Millionaire,” and “No Country for Old Men.”

Negotiating the intricate rules of the Academy and guessing what makes the organization’s members tick — many of them members of Chasen’s generation and older— require a particular variety of haimish charm that combines sharp intuition, steely persistence, an irrepressible love of movies and an appetite for cocktail party hors d’oeuvres and banter.

Having known and worked closely with her for 30 years, Winkler agreed that Chasen possessed a haimish personality. The producer of “Rocky” and “The Right Stuff” confirmed that Chasen — divorced, single and without children of her own — occupied an annual seat at the Winkler table for Passover Seders and was present “every year when we broke the fast on Yom Kippur.” She regarded her clients, he said, as mishpokhe, family.

A week after Chasen was shot multiple times in the chest and crashed her car into a streetlight on Whittier Drive, Beverly Hills police have announced no leads in the case. Friends, colleagues and even former LAPD Chief William Bratton speculated about whether Chasen was the victim of a drive-by shooting, road rage, a professional hit, a crime of passion or otherwise — but exactly how the showbiz dynamo came to her end was unknown.

At the Oneg Shabbat following Chasen’s death, Baron recalled over coffee and cake Chasen’s regular attendance of the Temple of the Arts on the High Holy Days with her late mother, as well as her many contributions to the synagogue. “Ronni never said no,” Baron said, recalling how Chasen used her public relations skills to bring talent and media attention to the synagogue’s activities — when the mayor of Haifa was visiting, when Hillary Rodham Clinton came to speak and when Yom Kippur services were televised on the Hallmark Channel for the benefit of the homebound (even garnering a “one share” in Nielsen ratings). She knew how to create buzz and enjoyed getting out the story about the synagogue, Baron said.

Like a Los Angeleno version of Broadway Danny Rose, Chasen was “a throwback to what seemed like an earlier time,” Melinda Newman, former west coast bureau chief of Billboard magazine, wrote in her blog. “In a world that now relies on e-mail, she was an old-school press agent whose assistant placed her calls.”

But the backstory, as they say in the movie business, was that whoever killed Ronni Chasen, for whatever reason, silenced a unique voice that may have seemed linked to the Hollywood of another era, but was actually very much connected to the present. “In a business which lacks a lot of authenticity,” Variety executive editor Steven Gaydos told the Forward, “Ronni was the real thing.”

Chasen Was a Hollywood Story, in Life and Death