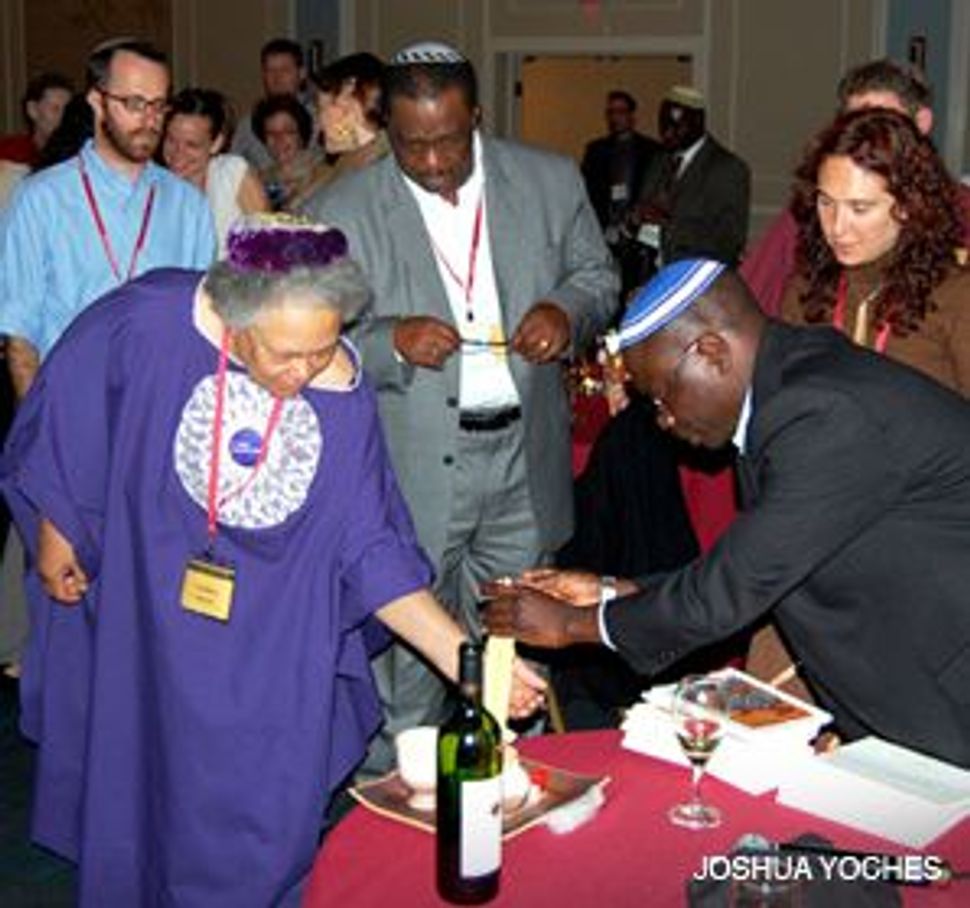 SHEDDING LIGHT: Attendees at a gathering sponsored by the Be?Chol Lashon International Think Tank performed the ritual of havdalah, marking the Sabbath?s end.

San Francisco – Go to almost any Jewish conference and you’ll likely find the ethnic makeup to be largely, and unsurprisingly, white. 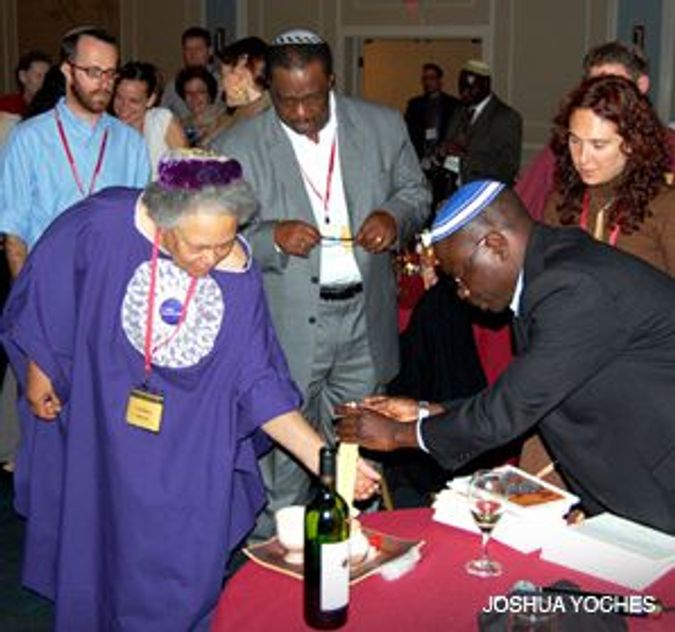 SHEDDING LIGHT: Attendees at a gathering sponsored by the Be?Chol Lashon International Think Tank performed the ritual of havdalah, marking the Sabbath?s end.

But at a recent plenum in San Francisco, a group championing ethnic diversity in Jewish life turned that situation on its head, as scores of black, Latino and Asian Jews from around the world came together to grapple with the challenges they face gaining acceptance in the mainstream Jewish world.

The group of 80 Jewish leaders from 31 different countries — including Uganda, South Africa and Portugal — who gathered the first weekend this month for the Be’Chol Lashon International Think Tank had one clear message for the Jewish community: Open your doors to diversity. The sixth annual event, organized by Be’Chol Lashon — a Bay Area initiative dedicated to fostering diversity in Jewish life — and fittingly held at the Hotel Kabuki in the heart of San Francisco’s Japantown, centered this year on questions of conversion and whether Judaism might take a more proactive role in gaining adherents.

As demographic studies in recent years have shown a shrinking American Jewish population, the organized Jewish community has poured millions of dollars into strengthening identity in young Jews. But the mainstream response to the so-called population crisis, which has resulted in a slew of identity-building projects — among them, “Birthright Israel,” a program that takes tens of thousands of American Jews in their teens and 20s on free trips to the Jewish state — is not the solution, according to Diane and Gary Tobin, co-founders of Be’Chol Lashon. The organization, whose name is Hebrew for “in every tongue,” was established eight years ago in the wake of the Tobins’ 1997 adoption of an African American boy.

Gary Tobin, a Jewish researcher who is president of San Francisco’s Institute for Jewish & Community Research, contends that only through welcoming converts of all ethnicities and breaking down the barriers to conversion will the Jewish people be able to reverse the trend of dwindling population numbers. Tobin is referring not just to welcoming converts who are married to Jews, but also to reaching out to non-Jews generally.

“If we think that going to Jewish day school or trips to Israel are going to save the Jewish people, it’s just silly,” Tobin said. “The response of the organized Jewish community has been to circle the wagons, and what this room represents is the possibility of expansion, not constriction,” he said, referring to the conference participants.

The driving philosophy behind Be’Chol Lashon, Tobin added, is that Jews should, in fact, “be competing in the marketplace of world religion.” If Jews began reaching out across color lines, the number of Jews in America alone could increase, over the next quarter of a century, to 12 million from 6 million, he said.

Indeed, some in the organized Jewish community take issue with Tobin’s approach. In more traditional corners, emphasizing outreach over strengthening Jewish identity from within is often met with skepticism.

“We’re worried about bringing people in, but what about people leaving?” said Rabbi Elazar Muskin of the Modern Orthodox Los Angeles synagogue Young Israel of Century City. “We have to have more money and creative efforts spent energizing those who are already within the Jewish community rather than proselytizing.”

Conference participants were as diverse geographically as they were in skin color and ethnicity. Participants included Rabbi Capers Funnye of Beth Shalom B’nai Zaken, a predominantly African American Jewish congregation on Chicago’s South Side; Ishe F.C. Raulinga Hamisi, an elder of South Africa’s Lemba community, which claims Jewish roots, and Miguel Segura, who was raised in Mallorca as a Xueta, the name given to descendants of Jews from Mallorca who were forced by the Catholic Church to convert to Christianity.

On the first day of the conference, Jewish legal scholars — including a Modern Orthodox rabbi, Darren Kleinberg — parsed Jewish law, or Halacha, and what it has to say about conversion. Contrary to widely held belief, the panelists agreed, Jewish law is far more open to conversion than contemporary practice would indicate.

That discussion was enough to sway at least one Korean American conference participant, Helen Kim, to reconsider her reservations about conversion. Kim, a 35-year-old sociology professor at Whitman College in Walla Walla, Wash., is married to a Jewish man and has felt drawn to the religion ever since she first developed a grade-school crush on a Jewish boy. Kim, who has served for the past two years on the board of her local Reform synagogue, Congregation Beth Israel, said that she has long felt ambivalent about formally converting to Judaism, because of questions of bloodline. But the panel on Halacha and conversion convinced her otherwise. “This conference has made me feel less resistant to conversion and more comfortable with it,” Kim said.

Another panel considered the effects of last February’s ruling by the Israeli chief rabbinate that only 15 rabbinic courts and 40 designated Orthodox rabbis in America could perform sanctioned conversions. Rabbi Gershom Sizomu, a 39-year-old leader of the Abayudaya, a group of some 800 Jews in eastern Uganda whose ancestors have practiced the religion for nearly a century, said that it was refreshing for him to understand that even among Orthodox Jews, there are conflicts over the question “Who is a Jew?”

“It has become a Jewish culture that we don’t accept each other,” said Sizomu, who will return to Uganda next month, after receiving rabbinic ordination from Los Angeles’s American Jewish University. “You are frustrated with the Orthodox, and then you see they don’t even accept each other.”