Another Mosque Project Seeks Support, This Time With Jewish Help 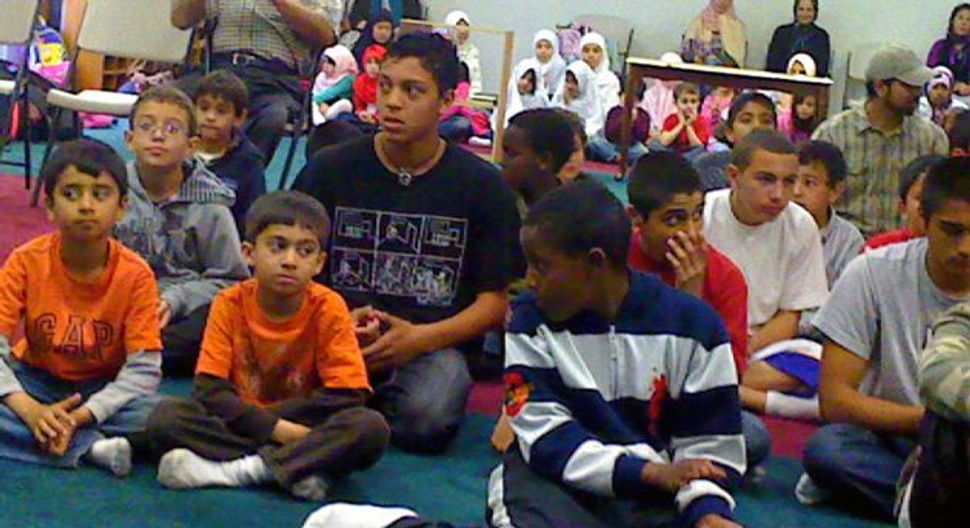 Next Generation: Children assemble for the Islamic Center?s Sunday school graduation ceremony in 2009. Image by PHOTO COURTESY OF ICTV

Asked why his group decided to spend the first night of Hanukkah with a Syrian-born imam and his flock to support their bid to build a mosque in the rolling hills of the Temecula Valley in California’s Southwestern Riverside County, Eric Greene replied, “We remember when there were protests in this country against synagogues being built.” 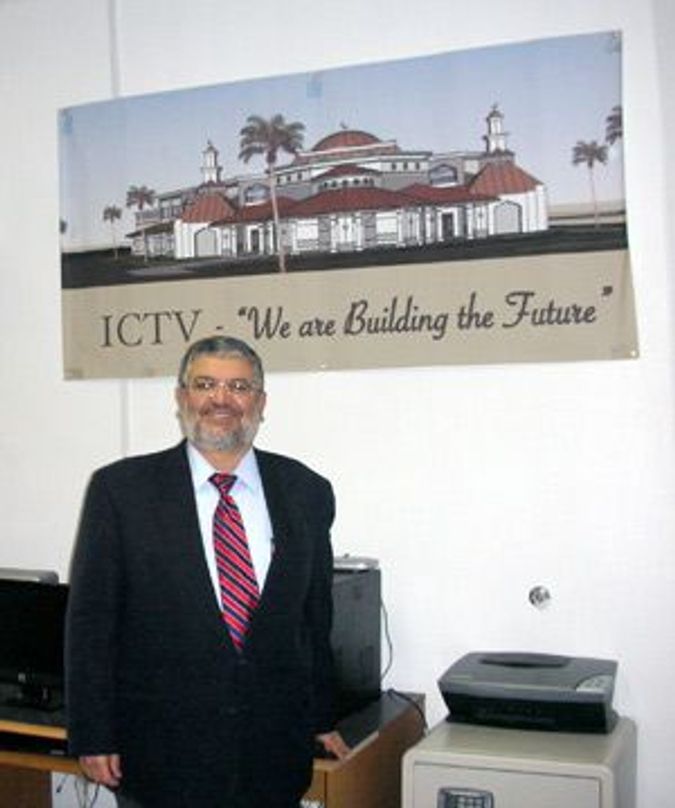 california Dreaming: Mahmoud Harmoush, imam of the Islamic Center of Temecula Valley, remains hopeful that one-on-one meetings with some local religious leaders will cool their opposition to his community?s expansion plans. A rendering of the proposed mosque is behind him. Image by JUDY SCHARINGER

Given that Hanukkah marks the Maccabees’ defeat of a Syrian despot, it may be an irony, but Greene, regional director of the Los Angeles-based Progressive Jewish Alliance, sees the project and his group’s support of it as “a rededication of religious faith and freedom.”

Of course, not everybody in the Temecula Valley sees it that way.

Fred Carlson, a 46-year-old mechanic, made his first public pronouncement on the project, estimated to cost $2.5 million to $3 million, shortly after noon on July 30. It was a hot day, and getting hotter, when Carlson, cruising down Rio Nedo Road on his way to see a customer about getting paid, noticed a small crowd across from the current home of the Islamic Center of Temecula Valley within an industrial park. About 20 members of the crowd were holding signs in protest of the proposed mosque. Across the street, some 70 supporters of the mosque stood with their own signs.

“Pedophiles!” Carlson hollered from the window of his pickup truck at the mosque supporters, hurling a few expletives for good measure. “They should step forward and denounce terrorism 100%,” he told a reporter from the Los Angeles Times, who interviewed Carlson after his drive-by oration. For the record, Carlson labeled Islam a “Stone Age religion.”

“I wish I hadn’t said it,” Carlson confessed to the Forward from his home in the nearby town of Murrieta. “Dude, I got in trouble with my wife! She said I shouldn’t have used profanity, and she was right. But the paper only used a part of what I’d said.”

Carlson admitted he doesn’t personally know any of the ICTV people and has never looked at their website to learn about their activities and beliefs. Dyslexic, diabetic, and hard-pressed financially, Carlson’s own belief, however he’s arrived at it, is that the Islamic religion is contrary to his ideal of the American way of life. He holds onto that conviction strongly and clearly fears Islam itself as a domestic threat.

“We all know their goal is to impose Sharia law on the U.S.,” asserted Diana Serafin, also a Murrieta resident. The widowed grandmother, Tea Party activist and vocal opponent of the ICTV is an avid reader of anti-Muslim blogger Pamela Geller. Serafin believes that the ICTV’s proposed mosque is part of a widespread Islamic conspiracy to subvert the United States. It was Serafin and her small group that organized the July 30 rally via leaflets and website postings that urged protesters to bring bullhorns to disrupt the Muslims’ Friday prayers. The group also encouraged protesters to bring dogs, in the belief that Islam’s adherents regard canines as an insult.

Serafin, Carlson and others holding similar views were expected to be present at a December 1 hearing of the City of Temecula Planning Commission. Greene and his vanload of rabbis and Jewish activists also planned to attend. At the meeting, a vote was expected on the 24,943-square-foot mosque the ICTV is hoping to build on 4.3 vacant acres of the city’s rural land.

Temecula is hardly alone in its throes of controversy. Mosque projects in Sheboygan, Wisc., and in Murfreesboro, Tenn., recently won approval from local authorities after stormy deliberdeliberations. On Staten Island, a plan to build A mosque was recently aborted when the Catholic Church that was to sell local Muslims the site for the project changed its mind after local opposition arose. The proposed Park51 Islamic cultural center in Lower Manhattan, touted in headlines as the “Ground Zero Mosque,” continues to inspire fiery dialogues across the airwaves and online.

At 2,800 miles from Ground Zero, Temecula seems a long way from such controversies. Taking its name from the native language of the Luiseno Indians of the Pechanga tribes, Temecula boasts a quaint Old Town whose main street evokes the Old West style of the Californios who sparsely settled the area alongside the Pechanga under the old Spanish land grants. Cowboys moved in later, when the 89,000-acre Vail Ranch dominated the area. The sale of the ranch to developers in 1964, and the completion in the early 1980s of the I-15 freeway linking L.A. County with San Diego, spurred the Temecula Valley’s quick transformation to the present-day landscape of fast food, housing developments, shopping malls and planning commissions.

Incorporated in 1989 with a population of 28,000, the city has boomed under the guidance of a politically conservative municipal government that appears to have balanced rapid development with a relaxed and culturally diverse lifestyle while preserving the town’s scenic setting. Slung across high, hilly land between California’s coastal range on the west and the tall pine-covered peaks of San Jacinto Mountains to the east, maritime breezes wafting through the Rainbow Gap in the northwest deliver a Mediterranean micro-climate that nurtures more than 20 vineyards in the area. The Old Town Temecula Community Theater offers a rich program of ballet, chamber orchestra and string quartet concerts; a “Tribute to Harry James,” and even an evening of klezmer music.

“Development is contentious,” Temecula Mayor Jeff Comerchero said, leaning back in his office chair and wearing a patient smile — the kind that comes with a third term as the city’s leader. The 65-year-old Comerchero, who descends from Spanish Sephardim and was born in Brooklyn’s Bensonhurst, describes himself as a “life-long Republican” since campaigning for Barry Goldwater as a teenager. He is actually the city’s second Jewish mayor, following Jeff Stone, who now heads the Riverside County Board of Supervisors.

Comerchero maintains that his own attitude toward the mosque project is guided by his oath of office. “I am sworn to preserve the doctrine of due process and to protect the Constitution,” he said. Since the Religious Land Use and Institutionalized Persons Act passed Congress unanimously in 2000, he observed, “government can’t deny a house of worship in any zoning category.” The federal statute essentially prohibits the use of zoning laws to block the building of houses of worship.

Comerchero said he first became aware that an Islamic community existed in his city only a few months after 9/11, when the Interfaith Council of Temecula Valley organized a meeting to “get acquainted with our Muslim neighbors.” By that time, the parcel of land on the southwest corner of Nicolas Road and Calle Colibri had already been purchased for $250,000 by the ICTV.

The first Muslim families to settle in Temecula had been meeting in their homes to pray. Mosques exist in Riverside, Corona and Pomona, but the growing group rented a 1,200-square-foot commercial space in town that was more convenient. As families traded their increasingly high-priced houses in Orange County and San Diego for bigger, less pricey homes in Temecula, the town’s growing Muslim community needed more space for worship and community activities. When the ICTV was established at its present location six years ago, Mahmoud Harmoush had already shifted from part-time spiritual adviser to full-time status as the group’s imam, with a growing congregation of about 150 families.

Harmoush, 51, still seems surprised and shocked by the commotion the mosque project has kicked up in the valley. Sitting in his office in a building that the ICTV shares with TST Molding (“Custom Injection Molding & Engineering” the sign advertises), Harmoush offers chocolates from Iraq, dates from nearby Indio and tea from the supermarket. “We did not intend to have this publicity,” the imam said, almost apologetically. “We’ve been here for more than 10 years.”

The ICTV’S current site is a tidy but well-worn place. The carpeted mosque area is just off the entranceway. An anteroom provides space for shoes to be deposited before prayer. The temporary wall of the community space — where children play, meals are taken, marriages are celebrated — is lined with the flags of more than a dozen nations representing the congregation’s origins, including the stars and stripes at the center. Through the mesh wall, the workings of TST Molding’s manufacturing plant are clearly visible. Up a flight of stairs are a single classroom and the imam’s cozily cluttered office.

Harmoush recounted how, on the day of the July 30 protest, a police car stood parked outside, the protesters’ bullhorns could be heard inside the mosque during prayers and a young girl going inside with her mother asked, “Why do they hate us?” But he also chuckled at the protesters’ notion that dogs would offend the members of his congregation.

“We don’t hate dogs,” he said, adding that he himself grew up with two Doberman pinschers on a farm in Syria not far from Aleppo, where his mother still lives. “We just don’t allow them in the house.” His own house is within walking distance of the site of the future mosque. The eldest of his three sons is graduating next year from Columbia University; the others go to local public schools. His daughter, an eighth-grader, wears a hijab, like her mother. “I didn’t force her,” Harmoush said quickly, as if replying to the accusations of the mosque’s critics that Islam restricts women’s freedom. “No, she made her own choice.”

The mosque’s critics have been after Patrick Richardson, the city’s director of planning and redevelopment. A lanky man in a crew cut and no-nonsense gray suit, Richardson said he has been getting calls from people — many from outside the community and from other states — who say, “Why don’t you stop this?”

“We’re a land-use agency,” Richardson told the Forward in his City Hall office, summoning his stock answer to queries from the media or anyone else. “We don’t get into where they get their financing from, or questioning whether Islam is a religion.”

Richardson says the mosque project has satisfied all the requirements — traffic studies, environmental-impact reports, even a preliminary survey for endangered burrowing owls — and it will all come down to a 3 out of 5 vote by the planning commission December 1. His department recommended that the project be approved.

Surveying the vacant acreage at the corner of Nicolas and Calle Colibri, the imam was optimistic. He welcomed the support from PJA and other groups, even a gay men and lesbian group that showed up during the July 30 protest. “We are building, not destroying,” he said. “We are not at war with anyone here.”

Eventually, he predicted, even the Rev. Bill Rench of Calvary Baptist Church just across the street from the site of the mosque will be a good neighbor, despite the pastor’s recent pronouncements to the press that the newcomers are unwelcome and that Christianity and Islam “mix like oil and water.”

“We’ve had some one-on-one meetings,” Harmoush said, smiling hopefully. “And I have friends at other Baptist churches.” But he knows now that in America’s current climate of fear and anxiety, it won’t be easy, and that far from settling the issue, the Planning Commission’s vote will be just the beginning.

Another Mosque Project Seeks Support, This Time With Jewish Help