A Thing of the Past 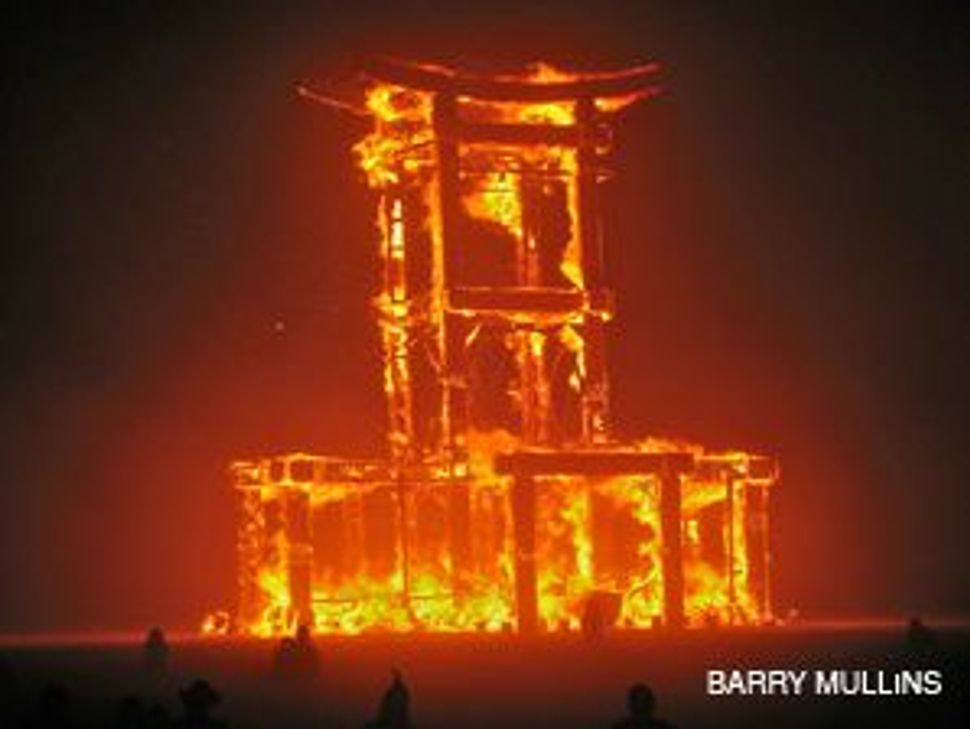 UP IN SMOKE: The Temple at Burning Man (pictured above in 2007) is set on fire, along with items people want to be rid of, each year.

Objects have power. In my last column I wrote about the power of Christian right-wing trinkets as symbols of identity and values. A Torah is another powerful object; when it’s no longer usable it has to be buried, like a dead body. Then there’s the power of loveys and blankies — they’re sources of security, a reminder of the membrane between self and other, a stand-in for parental love, an opportunity for toddlers to practice caretaking. Then there’s the power of an American flag lapel pin, the absence of which, in this election, apparently means, “I am so totally a Muslim.” 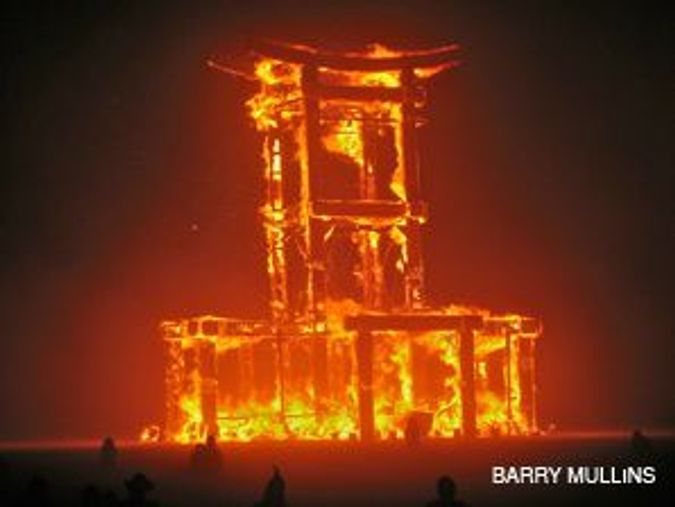 UP IN SMOKE: The Temple at Burning Man (pictured above in 2007) is set on fire, along with items people want to be rid of, each year.

The powerful object in this story is my sister-in-law’s ketubah. It is hers; the ketubah belongs to the wife, not the couple. Or in this case, the ex-wife. Ellen got divorced last year. She was married the day after her 25th birthday, divorced five years later. She craved a ritual to get rid of the ketubah, a symbol that weighed on her.

Every summer she goes to Burning Man, the arts festival in the Nevada Desert. She camps with my husband and their mutual friends. (I stay home, where there is air conditioning and a notable lack of fire-spinning, drug-addled, body-painted naked people to explain to the children.) And for the last few years of Burning Man, among the art cars and theme camps and sculptural installations, there has been a giant structure called The Temple. Originally created by sculptor David Best, it looks different every year, but it has always been created out of recycled sheets of plywood full of punched-out, lattice-like holes. (The first Temple was built from the discarded outlines of a make-your-own-dinosaur kit found in a Dumpster behind a toy factory.) Thanks to the airy, lacy design, it looks like a Balinese temple constructed of model airplane materials. People walk through it all week, leaving mementos of loved ones — army boots, photos, Bibles — and items they want to be rid of. I know someone who burned a wedding dress, someone who burned her mother’s ashes, someone who burned poems by a friend who died — too young — of cancer. People write notes on the structure’s walls. Then, the day after the ritual burn of the The Man (the giant effigy that gives the festival its name), the Temple is set on fire. Words and objects go up in flames.

When Ellen told me she wanted to burn her ketubah, I freaked. I begged her not to do it. I wasn’t quite sure why. I knew she hadn’t gotten a get (a Jewish certificate of divorce). I knew that without one, she wouldn’t be able to marry a more observant Jewish person, that her children would be considered mamzerim, bastards, and if they or their children or their children’s children ever wanted to marry a more observant Jew, or get married in Israel, they couldn’t. What if she needed the ketubah as proof of her marriage? What was the law? What if this object had some ritual power I didn’t know about?

And: fire. Our people have a history with fire. Burnt offerings in Temple times, a miracle flame that lasted for eight nights, terrifying black ribbons of burnt books and Torahs. Other cultures burn their dead in elaborate rituals, burn incense to waft to loved ones in the afterlife, create meditative sand art designed to be impermanent. But I don’t think Judaism loves impermanence; we’re the people of the book, after all — it’s here, it’s written, get used to it; after the Holocaust, impermanence wigs us the hell out. It certainly wigged me out.

But Ellen wanted to flambé the thing. “I’m not religious!” she told me. “I resent that this thing has such power! I don’t believe all that stuff about my children being bastards, except I kind of do!” She sounded like a Shalom Auslander character.

A little research told me she didn’t need the ketubah to acquire a get. I learned that an organization called Kayama helps divorced Jews accomplish this; one can even use a proxy if one prefers not to see one’s ex. So why did I care if she burned the thing? Was it pure narcissism? I was the one who found the ketubah, choosing one I thought Ellen would like, emailing the artist, running interference when Ellen’s fiancé fought with their rabbi about the content. Was I just annoyed that she was barbecuing something I felt ownership of? Or did I have some sort of Auslanderish visceral reaction myself, an evil-eye anxiety about destroying a ritual object?

Probably #2. I backed off. Ellen humored me by taking a digital photo of the ketubah before leaving for the desert.

After she returned, she told me what happened. “When I was ready, I biked with three friends to the Temple, with the ketubah rolled up under my arm,” she said. “The playa — the desert — is huge, and I had time to think on the ride over. I felt strong and happy, surrounded by friends, as if I were 6 years old and in a little biker gang. We walked around, reading the walls, looking at other people’s notes and objects. My friend put her mother’s ashes onto a little shelf. There were some nooks for people’s mementos; I slid the ketubah into one. The night of the Temple burn, I walked out into the desert to watch from afar, sitting on a towel with a bottle of champagne, thinking, ‘Thank God this is over.’”

In some ways, The Temple is the mirror image of the Western Wall. People place notes in the Wall because of its agelessness; its sense of holiness derives from its association with the long-ago Temple in Jerusalem. But they put notes in Burning Man’s Temple precisely because of its ephemeral nature, because it will disappear and the notes will be immolated. At Burning Man in general, the sense of sacredness comes from impermanence, not permanence.

It’s facile to say that Burning Man is all about a yearning for community dissociated from commerce and commercialism, a need for religion and ritual in a world that’s too fast-paced and secular. But it’s also true. These people go into the desert, without their cell phones and Blackberries, seeking meaningful connections and beauty and art, because they lack those things in their daily lives. (A non-white friend observed, “Burning Man is for rich white people without real problems.” But spiritual yearning is a real problem.) It’s easy to say that organized religion fails to satisfy their inchoate longings. But that’s true too. Whether a week in a desert once a year is enough to fuel a lifetime is a different question.

Today Ellen’s in a new relationship. She’s happy, and her happiness makes me happy. If I wish Judaism could have answered her needs as well as Burning Man did, is that her problem, or mine?

A Thing of the Past