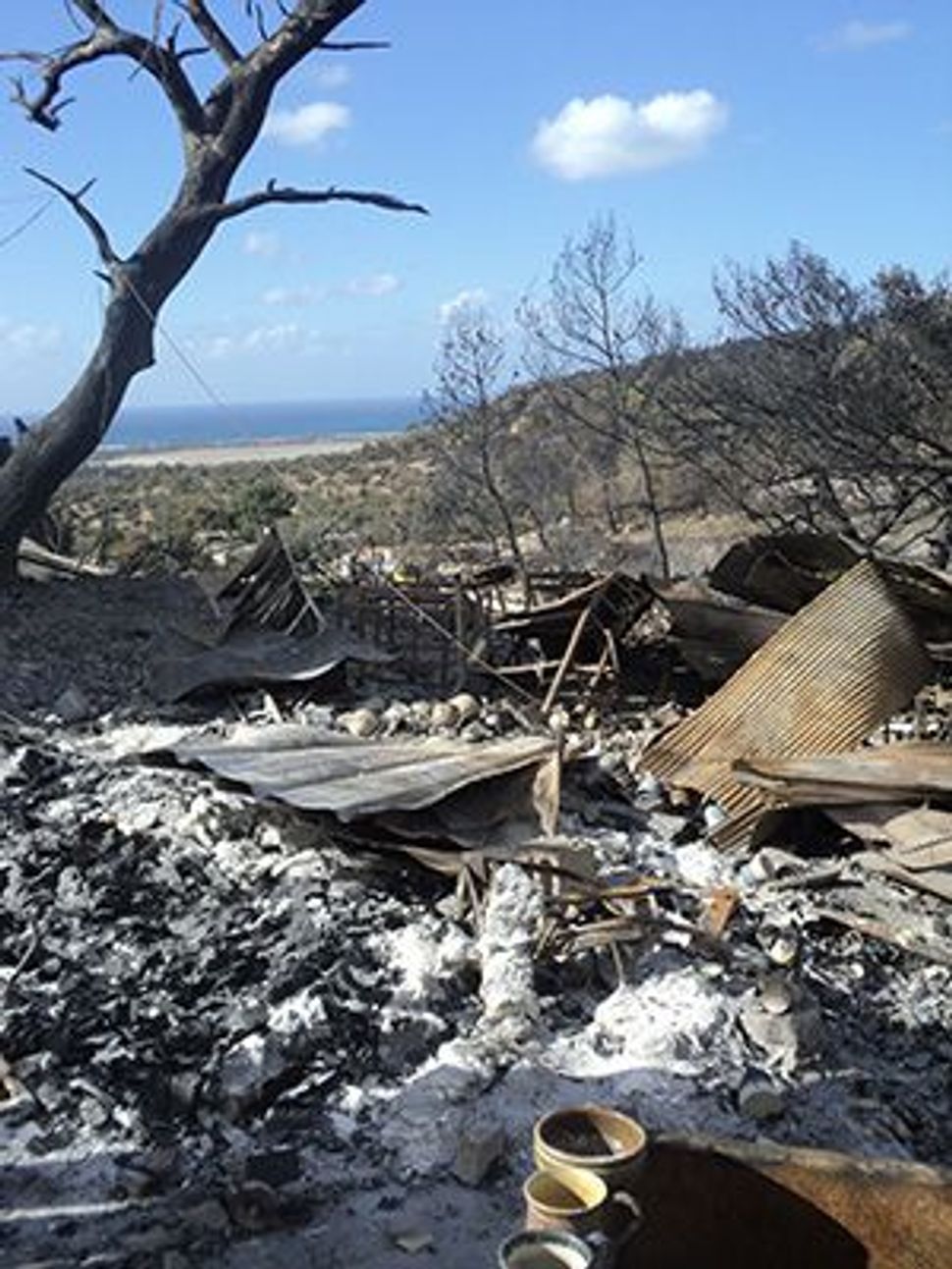 In the Fire?s Path: A pottery studio and beloved book shop were among the village buildings that were destroyed. Image by NATHAN JEFFAY 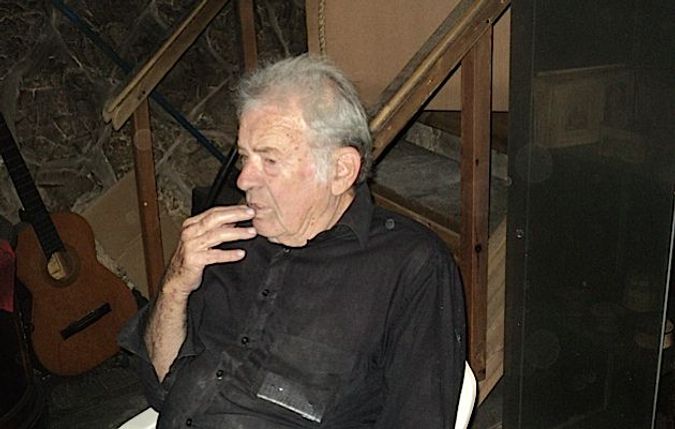 Mourning the Music: Nissan Cohen, in what remains of his Museum of Music. Image by Nathan Jeffay

When New Yorker Nisan Cohen moved to Israel 15 years ago, he took along his treasured collection of 200 music boxes, and made it the core of a new museum he opened. On December 6, he sat, woebegone, in his soot-filled museum, his entire collection ruined by the forest fire of the preceding four days.

The worst fire in Israel’s history has killed 42 people, destroyed about 12,000 acres of forest and claimed an estimated 5 million trees. Authorities say a 14-year-old boy from northern Israel, arrested December 6, has admitted to throwing a burning coal from a hookah pipe into the forest — apparently triggering the blaze. 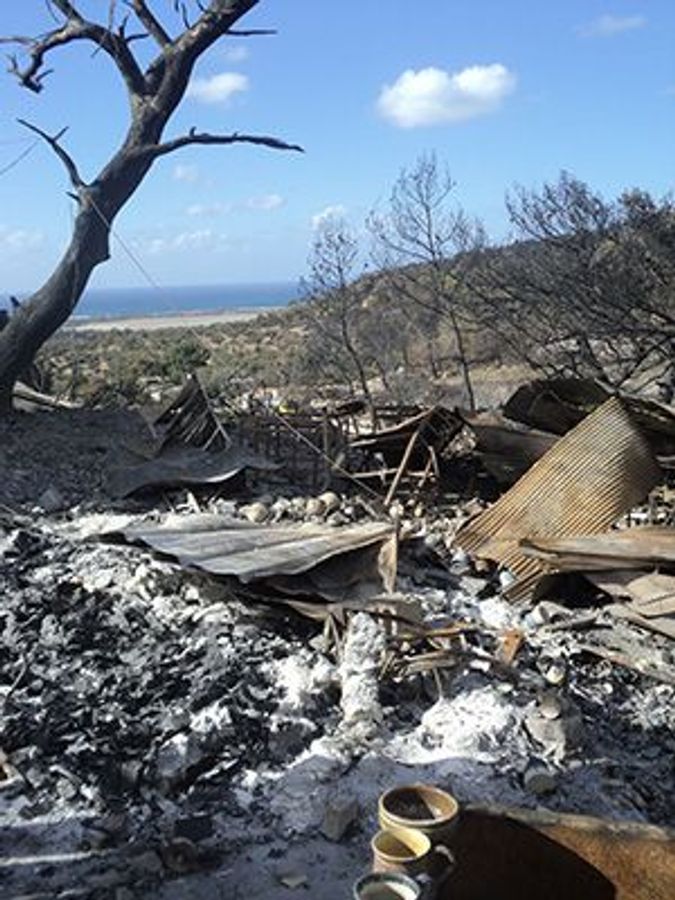 In the Fire?s Path: A pottery studio and beloved book shop were among the village buildings that were destroyed. Image by NATHAN JEFFAY

Cohen’s Nisco Museum of Mechanical Music, normally buzzing with Israeli adults and children and American tour groups enjoying a collection that took Cohen 45 years to gather, is now mostly shrouded in darkness. The lone exception is some daylight streaming in from a point where looters had entered to take a few items, adding insult to injury.

The museum, usually filled with songs from competing music boxes, was quiet, apart from the voice of Cohen, 84, who was trying to come to terms with what had happened. “The heat was so intense that even those music boxes not reached by the flames had the [mechanical] cone destroyed so they don’t have their music anymore,” he said.

The sad fate of Cohen’s music boxes was but a slice of the overall devastation found in the village of Ein Hod, just south of Haifa. Ein Hod is a 150-family artists’ village from which 10 Israel Prize-winning artists hail.

One in 10 families had a building destroyed or badly damaged by the fire, and there was a great deal of anger about the way the state responded to the blaze. But residents were determined to overcome the disaster. “Israel doesn’t have an easy history, and we are in survival mode: The fire won’t defeat us, we’ll defeat the fire,” Shay Manheimer, who runs a jewelry store, told the Forward.

It is difficult to apply Manheimer’s positive outlook when standing at the home of Zeev Verchovsky, a resident of Ein Hod since 1976. Signs across the village direct you there, inviting you to his wife Naomi’s pottery studio. The studio burned to the ground, and all that remains are fragments of pottery and 10 wheels.

A few yards away are blackened shelves and heaps of ash — surprisingly small heaps, given that they are the remains of 15,000 books. This was Verchovsky’s bookstore, a gem adored by northern Israeli booklovers as well as foreign tourists by virtue of its large English-language collection. “I work in books, and my wife works in pottery. What we sell is what we eat,” Verchovsky said, adding that no company would insure his book collection.

Half of Verchovsky’s books were sold through mail order, and the orders have continued to arrive. “I have a standard response when a book can’t be found, saying, ‘We’re sorry, the book is not available.’ I need to change it to, ‘The book is burned,’” he said.

In addition to charring the village’s interior, the fire scarred its idyllic surroundings — the muse of many of the artists. The village boasts views of the forest and the sea, but now large parts of the forest look like charcoal storage areas.

“I think we feel that we moved but stayed in the same house. In many places, the surroundings look so different,” said silk printer Lea Ben-Arye, a resident for 25 years.

Since the fire began, the Israeli media and political sphere have reverberated with criticism of the state’s response and what were said to be insufficient firefighting resources. Lawmakers from several parties have called for the resignation of Interior Minister Eli Yishai, and Prime Minister Benjamin Netanyahu has reportedly ordered the creation of a national firefighting command under his own office, which would constitute a circumvention of Yishai’s authority.

In Ein Hod, there was widespread contempt for the state’s response. There was also a conviction that the only reason more buildings weren’t destroyed was that residents took matters into their own hands and disobeyed police instructions.

Gallery owner Nechama Levendel said she was angry that officials decided to fight the fire from the air and not position fire engines in the village. “I feel offended that nobody was here to help,” she said.

This disappointment led several dozen villagers to disobey the December 2 instruction to evacuate. Levendel and her husband, Nadav Bloch, were among them, leaving only when the flames were across the street on December 3, and sneaking back in against police orders December 4. Levendel insisted that all the villagers were right to stay and “guard” the buildings.

Israel Police spokesman Micky Rosenfeld said that people who disregarded police instructions to evacuate and those who crossed police cordons “endangered their own lives and made irresponsible decisions.” He noted that the fire changed direction several times. “Therefore we didn’t take any chances,” he said.

But some Ein Hod residents said the defiance paid off. David Lasry, who runs a village shop, said that when he crossed police cordons to re-enter the village on December 4, one wall of his home was on fire. “Luckily we had a swimming pool with water, and we found everything [we could use] to take the water and throw it at the walls,” he said.

While Levendel, Bloch and Lasry left the village for a time, about 30 residents remained throughout the fire. “Unfortunately we had to ignore the instruction and follow our common sense, and this saved a lot of buildings,” said Gil Becher, who runs a theater company. He claimed that those who remained saved 20 houses from the fire. “It’s not safe, but you know that if you leave, you have no control,” he said. “To give up from the beginning and follow the orders of the police is awful.”