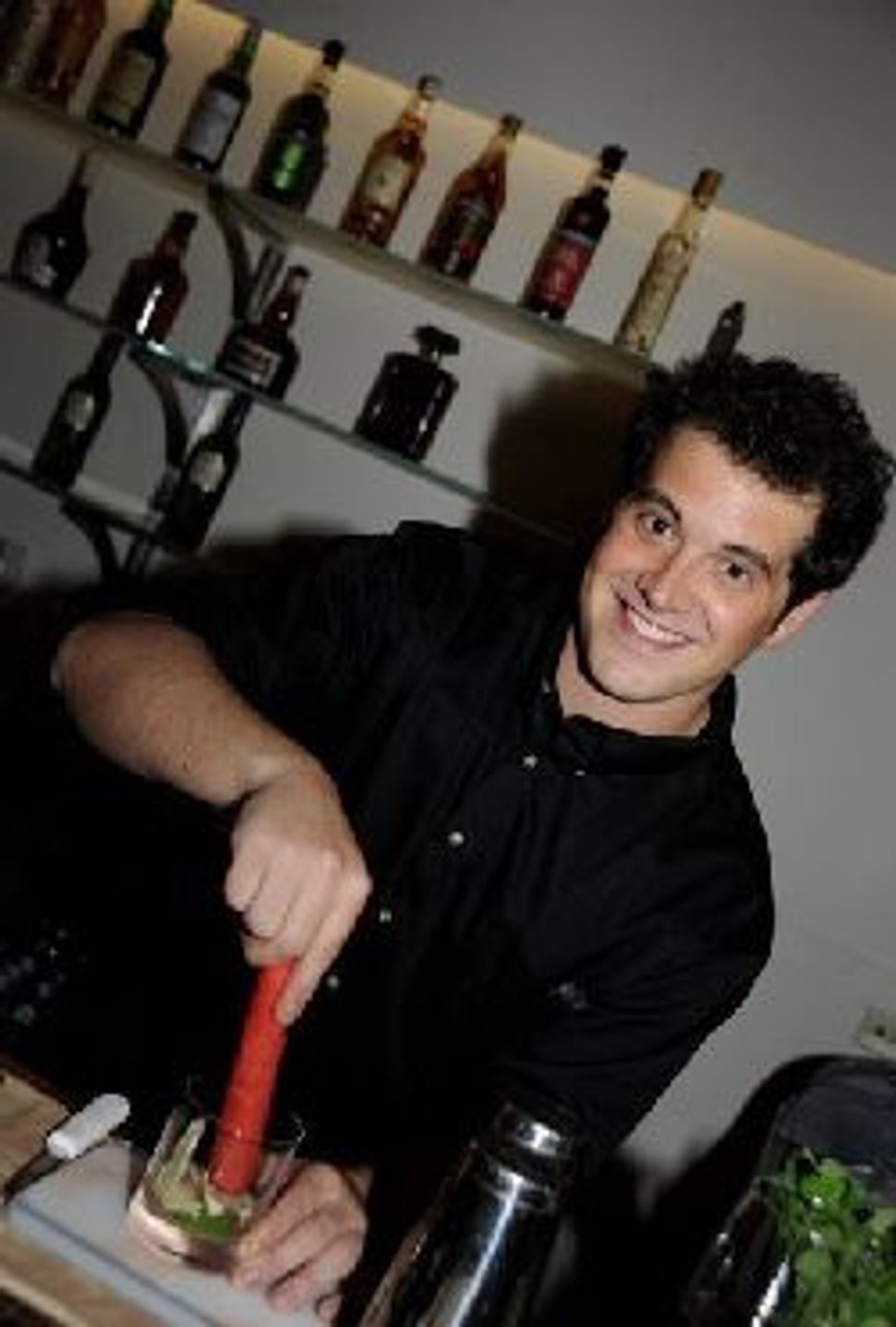 This year, New Year’s Eve falls on a Friday. The auspicious convergence offers an extra opportunity to party, or to infuse the Sabbath table with even more simcha (joy) — and also to celebrate a Jewish bartender who fuses his faith with his passion for spirits. The Forward spoke with Ari Moffic Silver, a former Jewish day school student-turned professional mixologist who slings cocktails in his hometown of Chicago. Silver, 26, took a break from the bar to discuss the creative side of bartending, his favorite 18th-century Russian liqueur and how to add a Jewish spin to your next cocktail party.

What made you interested in becoming a mixologist and a bartender?

I have always loved food and dining out with friends and family. At some point, I began to wonder what it would be like to be on the other side of the bar. 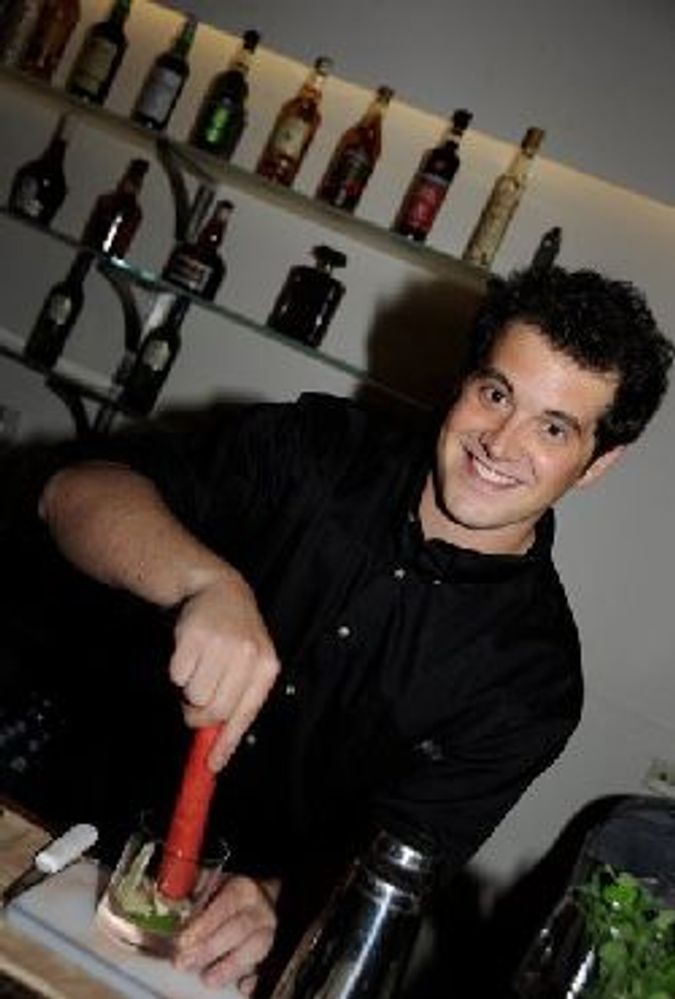 I started with a class at the American Bartenders School, and ended up with a gig at an Italian restaurant and lounge right out of the gate. A year later, I took a class on spirits at the Cooking & Hospitality Institute of Chicago. We made classic cocktails and learned about the manufacturing of different spirits, flavor combinations, and how to pair foods with certain wine and cocktails. I absolutely loved it.

What do you enjoy most about the job?

As a bartender, you get to express your creativity and give your guests a memorable experience. Someone can say they want something fruity or sour or sweet, and you get to guide them to the right drink and tell them the history of what they are drinking. I love using fresh ingredients and unusual spices, like star anise or tarragon, and playing around with garnishes, atomizers [devices that convert liquid into a fine mist] and bitters [distilled alcohol flavored with herbs, flowers and other plants].

Was drinking a significant part of your family’s Jewish celebrations growing up?

During holidays we would have wine, but drinking was not prominent in my house. Still, as a kid I was always mixing things. If we had Fanta and Sprite and Diet Coke on the table, I would experiment with them, adding cherry juice or apple juice and looking for my favorite combination. I also have fond memories of drinking grape juice on Passover and Shabbat. I remember thinking that white grape juice, when it showed up, was a particular luxury.

Jews are not necessarily known for having a pronounced drinking culture. Why do you think that is?

Jewish drinking is inherently moderated. There is a set ritual amount to drink on Passover, and a set amount you are supposed to have for Shabbat. There seems to be this general notion that you can enjoy yourself without focusing on getting intoxicated or going overboard. It is an approach that really appeals to me.

You contribute a column on drinking and spirits to the website Oy!Chicago. Have you discovered any interesting historical Jewish drinking connections during your research?

Absolutely. People often focus on the culinary aspects of Judaism, but it seems silly to miss out on our shared drinking history or minimize it in comparison to food. After all, you can’t really have a full Jewish celebratory meal without some kind of drink.

My dad recently sent me this article about a cherry liqueur that 18th-century Russian Jews made, called nalivka. [Editor’s note: Nalivka was a popular homemade spirit in Jewish and non-Jewish households.] Families would take these big wooden barrels, fill them with pitted cherries and honey or sugar, and store them in the cellar for several months. When the holidays came around, they would unearth the barrels and toast with their homemade spirits. In Eastern Europe they did not have the climate for the citrus-based spirits that Italians made — things like limoncello [lemon liqueur] — so they used locally available fruits, like pears and plums. I think it’s fascinating to imagine a bunch of Russian-Jewish grandmothers making homemade spirits, but they did!

Do you ever have an opportunity to bring together the Jewish and bartending sides of your personality?

At the bar where I work there is not a lot of room for that, but at home or when I’m bartending for private parties, I’m always looking for a Jewish twist. Sometimes I will use the parsha [torah portion] as a thematic jumping-off point, or I will tie in whatever holiday is coming up. I made a brandy-based cocktail for Hanukkah; the cocktail’s orange color was reminiscent of the holiday’s lights. I also added these menorah-shaped chocolate garnishes that I had made from melted gelt, which people enjoyed.

I have a personal crusade against the trend of resorting to [overly sweet wine] or terrible kosher brandies as the only way to “drink Jewish.” There are so many ingredients at a Jewish bartender’s disposal, and more and more good kosher spirits out there — like this new distillery based near Chicago, called Koval. They make organic, kosher spirits, with interesting flavors like chrysanthemum honey and jasmine. But whatever ingredients I end up using, the most important thing for me is to keep experimenting. The worst thing that can happen is a bad-tasting cocktail, and the best is a new favorite to add to my repertoire.

Stock With Care: Cover your bases by stocking a variety of liquors. Choose from rum, brandy, gin, vodka, bitters, wine, champagne or sparkling wine, as well as tonic and seltzer water or juices to use as the foundation of drinks. To find kosher-approved spirits, the CRC (Chicago Rabbinical Council) and Star-K both have extensive lists on their websites. Having the right equipment (a blender, cocktail shaker and sturdy punch bowl) is also important.

Pick a Theme: Choose a holiday or traditional Jewish dish, and base your cocktail around it. Go for a “milk and honey” inspired cocktail by drizzling honey into a traditional White Russian, or create a Seven Species mix-and-match drink bar. You can even try a sufganiya (jelly doughnut)-inspired vodka cocktail by adding powdered sugar to the mix.

Mix It Up: Jewish tradition is filled with symbolic flavors and ingredients that easily add a Jewish flair to drinks. Mix pomegranate nectar with champagne for a biblically inspired mimosa, or garnish your Bloody Mary with a kosher dill pickle spear and chopped fresh dill. Play around with other creative garnishes, drink colors and flavored ice cubes until you find what you like.

Leah Koenig writes a monthly column for the Forward on food and culinary trends. Contact her at [email protected].