Women Continue To Lag Behind In Top Nonprofit Positions and Pay 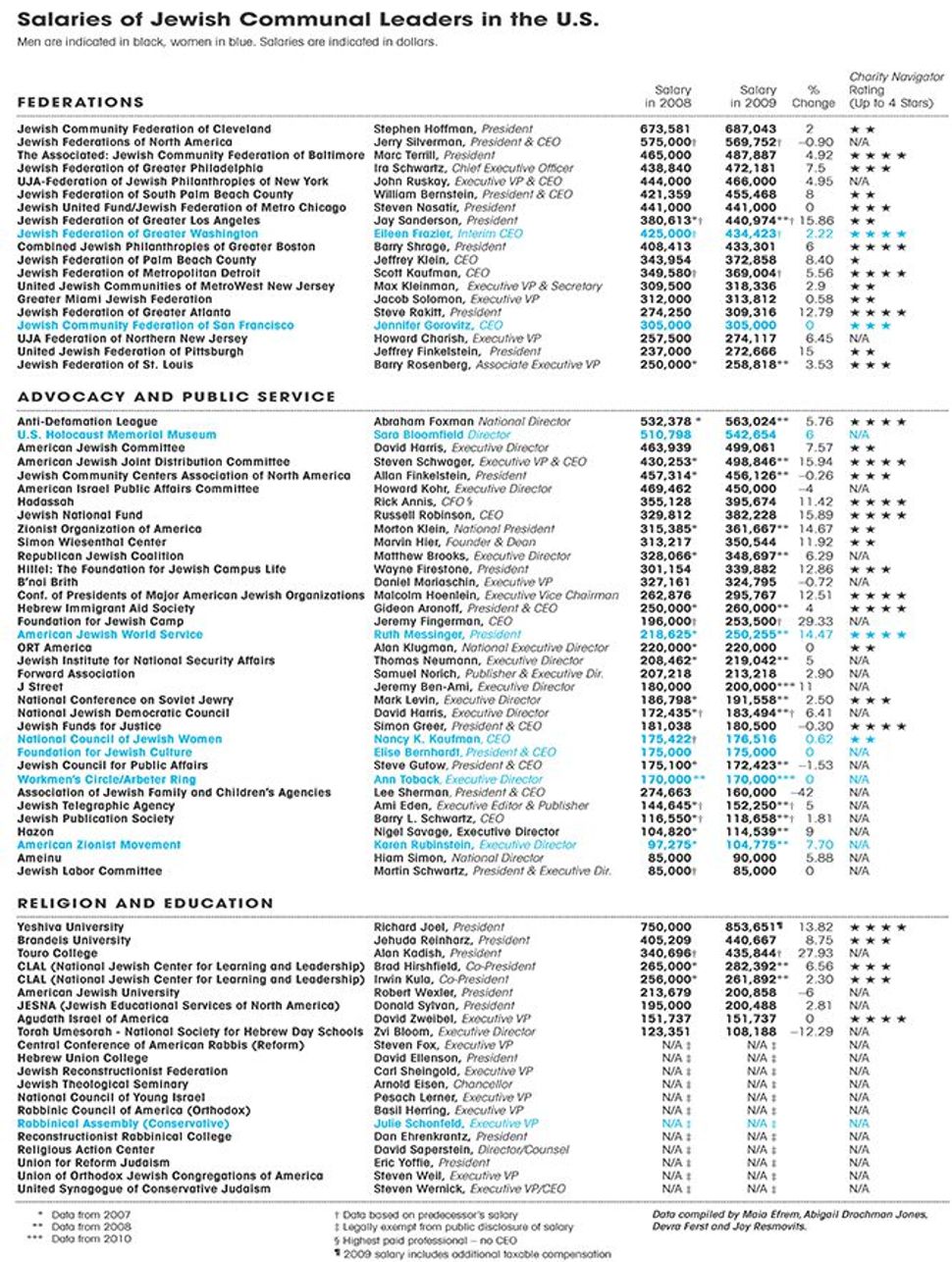 Salaries of Jewish communal leaders in the U.S. (click to enlarge)

With reporting by Maia Efrem and Devra Ferst.

The Forward’s second annual survey of 74 major Jewish national organizations found that in the past year, women lost ground in leadership, continued to lag behind men in pay and did not experience the same increases in salary that a majority of the men enjoyed despite these recessionary times.

While there were 11 women serving as presidents and CEOs of federations, advocacy and public service groups, and religious institutions last year, there are now only nine. Even though the work force in these organizations is overwhelmingly female, the percentage of women in leadership roles has dropped in the past year to 12% from 14%. 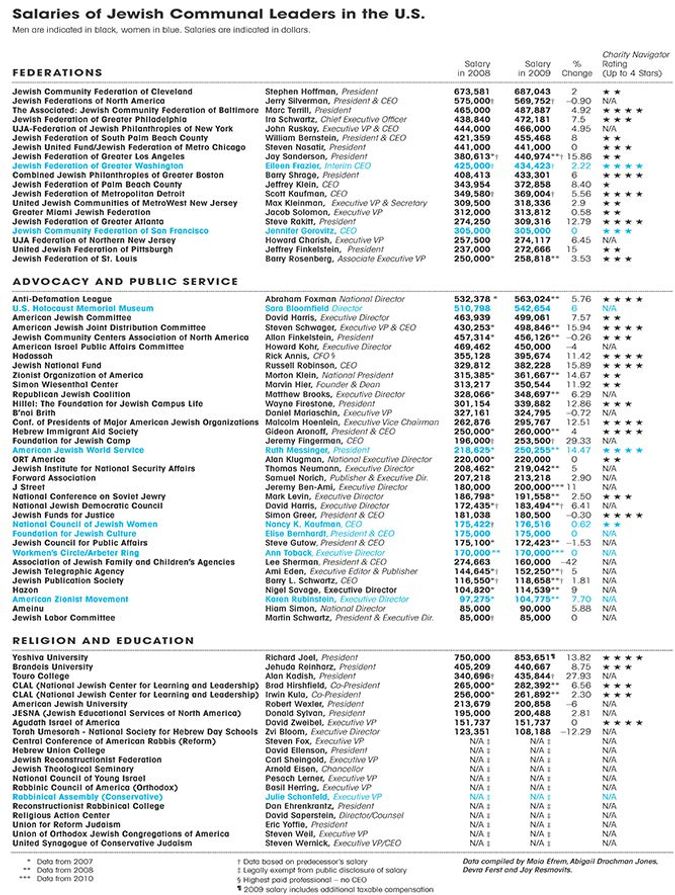 Salaries of Jewish communal leaders in the U.S. (click to enlarge)

In this, the Jewish communal experience is dramatically at odds with trends in the broader not-for-profit world. GuideStar, which collects the informational tax forms that not-for-profit groups are required to file with the Internal Revenue Service, reported in September that women were chief executives of nearly 47% of the nation’s charities in 2008. Although women were concentrated in smaller organizations, even in the larger charities — those with annual budgets of more than $1 million — they still held 38% of the top roles.

Using public records listed on GuideStar, the Forward found that the gap between male and female salaries among Jewish executives did grow smaller from 2008 to 2009, but women still earned only 67 cents to every dollar earned by men. The median salary for men was $316,074; for women it was $213,855.

Overall, Jewish not-for-profit leaders took home more pay in 2009, but here, too, there was a serious gender gap: For men, the median salary increase was 5.82%; for women it was 1.42%. Only six leaders in our survey took no pay increase at all, and three of them were women.

By at least one comparison, raises for not-for-profit leaders were more plentiful in Jewish organizations than they were nationwide. In a recent spot check of executive compensation at some of the nation’s biggest charities and foundations, The Chronicle of Philanthropy found that 59% of those leaders were paid more in 2009 than in 2008. Among the not-for-profit leaders in the Forward survey, nearly 80% received some sort of raise.

Among the nation’s 18 largest federations, leaders in only two cities — Chicago and San Francisco — took no pay increase at all. Most of the pay raises were modest, but a few federation leaders garnered large increases.

Officials of the Jewish Federations of North America declined to reveal the salary of Jerry Silverman, president and CEO, who assumed the top post in September 2009. The salary figures in the Forward chart refer to his predecessor, Howard Reiger.

Some women also received sizable salary increases during this period. Ruth Messinger, president of American Jewish World Service, saw her pay increase by 14.5%, and Karen Rubi nstein, national executive director of the American Zionist Movement, won a raise of 7.7%. Sara Bloomfield, director of the United States Holocaust Memorial Museum, remains the highest-paid woman in the Forward survey, earning $542,654 in 2009, a 6% increase from the previous year.

One anomaly continues to be Hadassah, the Women’s Zionist Organization of America, where the national president — right now it’s Nancy Falchuk — is a lay leader who is elected by the membership for a set term and receives no salary. For the purposes of this survey, then, the Forward cites the highest-salaried official at the organization, chief financial officer Rick Annis, who in 2009 earned $395,674.

Many of the Forward’s findings mirrored those of a study recently released by the Jewish Communal Service Association of North America and conducted by the Berman Jewish Policy Archive at New York University’s Wagner Graduate School. That study, of more than 2,000 Jewish communal professionals throughout the United States and Canada, also found that women made up only 12% of the leadership of that much larger group. Women lagged significantly behind men in compensation, earning about $28,000 less. Even when adjusting for age, years in the field, level of responsibility, hours worked and degrees earned, the gap was $20,000.

“Unlike many other challenges the community faces today, this one can be rectified with some good planning and fairer advancement of compensation policies,” Dan Brown wrote on his eJewish Philanthropy blog. “All have a responsibility to do their part in not just breaking the glass ceiling, but helping to level the playing field.”

This year, for the first time, the Forward is including ratings of Jewish not-for-profits listed in Charity Navigator, an independent evaluator of more than 5,500 American charities. The website uses a system of awarding charities one to four stars (four being the highest), based mainly on financial measures, such as how much they spend on fundraising and the ratio of their administrative costs to their overall revenue.

While an imperfect guide, Charity Navigator does provide comparative data that could be useful for contributors. It also is helpful in highlighting what it considers to be the charities most in trouble, and the ones deserving of recognition. On its current top 10 list of “the best charities everyone’s heard of,” the American Jewish Joint Distribution Committee is ranked ninth.

Women Continue To Lag Behind In Top Nonprofit Positions and Pay