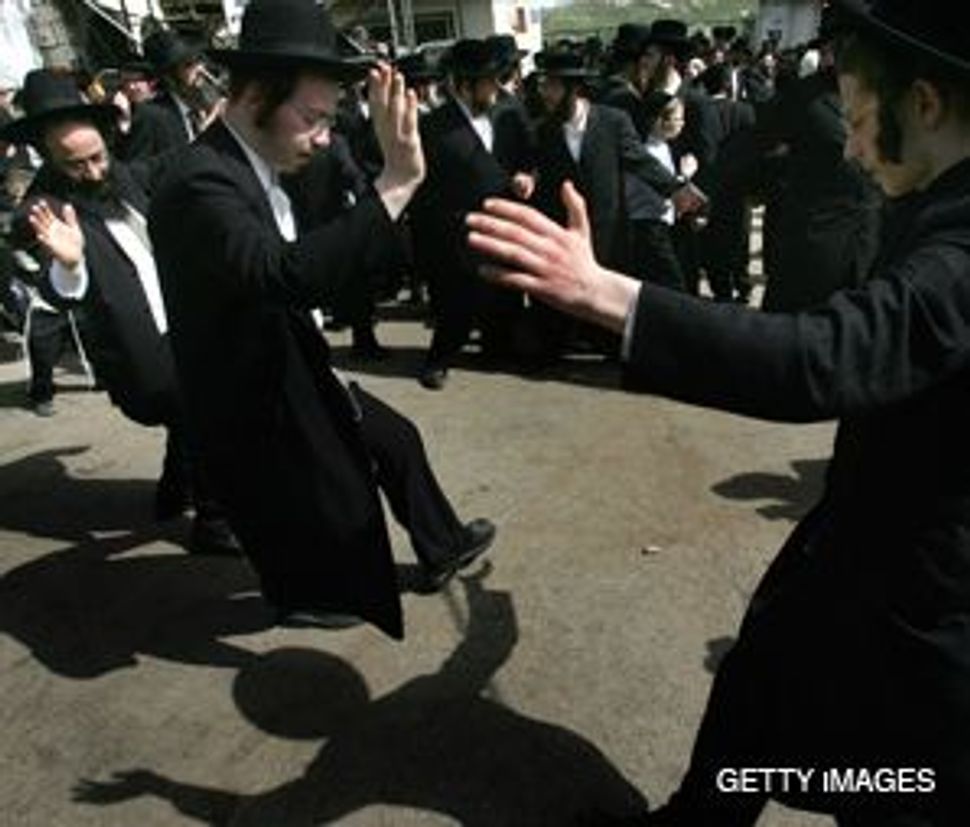 BATTLEGROUND: Ultra-Orthodox men dance during last year?s annual yahrzeit celebration at the grave of Rabbi Shimon bar Yohai. Two feuding trusts are embroiled in an acrimonious battle over control of the site.

Haifa, Israel – In Israel’s answer to the Woodstock Festival, nearly half a million people will gather on a Galilee mountaintop on May 22, where they will pitch tents and engage in 24 hours of feasting, singing and ecstatic dancing. 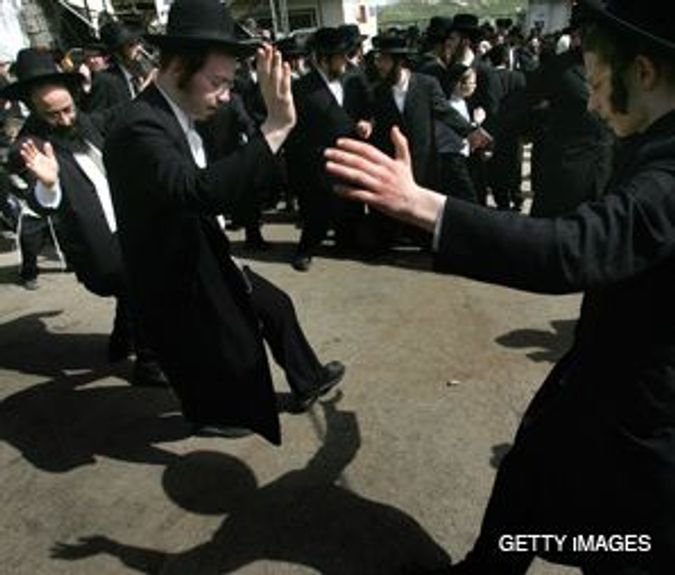 BATTLEGROUND: Ultra-Orthodox men dance during last year?s annual yahrzeit celebration at the grave of Rabbi Shimon bar Yohai. Two feuding trusts are embroiled in an acrimonious battle over control of the site.

They will be taking part in the annual celebrations held on the yahrzeit of second-century sage Rabbi Shimon bar Yohai at his burial place on Mount Meron, near the northern Israeli city of Safed. The yahrzeit coincides with the minor festival of Lag b’Omer.

The celebrations are widely viewed as a resounding display of Jewish unity.

“All shades of the rainbow come. There are Ashkenazim and Sephardim, Hasidim and knitted kippah-wearers, religious and secular,” said Shlomo Shalvash, head of the Sephardic trust for the upkeep of the site.

What makes bar Yohai such a crowd pleaser is the fact that he did not merely rule on matters of Jewish law. He is believed to have left the answers to life, the universe and everything, making him a figure of fascination for all these people, as well as stars like Madonna. Bar Yohai is the purported author of the Zohar, the central text of Kabbalah. But there is one mystery for which he left no answer: Just who owns his grave and the surrounding area? As revelers link arms and dance together, organizers will be locked in a bitter, ongoing behind-the scenes feud. Shalvash’s Sephardic trust and a rival Ashkenazic one both claim full ownership of the site.

The row is “paralyzing” the development of the site, the most visited religious place in Israel after the Western Wall, according to Jerusalem lawyer Shmuel Berkovitch, an expert on Israel’s holy sites. In comparison to the chic plaza by the Western Wall, facilities on Meron are sparse, as each side knows that any building work it carries out is likely to be halted by challenges from the rival trust.

“The place looks horrible,” said Yosef Schvinger, head of the National Centre for Holy Sites, the government office that is meant to oversee the tomb and its surroundings. “It is not as the second most visited holy site in the country should look. It is also a safety concern. [The building around the tomb] is a very old building, and it must be sorted soon, otherwise the structure could be in danger. It is falling down.”

What frustrates Schvinger is that there is no lack of money for development. Before his death in 1999, Monaco-based Jewish banker Edmond Safra instructed his philanthropic foundation to fund redevelopment of the tomb and the surrounding area. The bequest is believed to be several million dollars, though the foundation’s Israel representative, Yair Tarenageim, would not reveal its value.

Tarenageim appeared to concede that the arguments are stopping the release of the funds, saying that in order to use the money all parties involved would have to work together.

This week, as the row between the trusts continued, another battle began over the mountain. Moshav Meron, which surrounds the tomb, managed to halt work by the police and the National Centre for Holy Sites in preparation of the influx of Lag b’Omer visitors.

The injunction stopped all Lag b’Omer preparations from Sunday, May 11, until the afternoon of Wednesday, May 14, when the case was heard in full and the moshav’s demands rejected.

Between the rival trusts, the battle lines are clearly drawn. According to Shalvash, “All areas are our areas” and the Ashkenazic trust “has no control of” Rabbi Shimon bar Yohai. But Ben-Zion Guberstadt, board member of the Ashkenazic trust, states simply, “We say the whole thing is ours.”

Both groups claim hundreds of years’ precedent, and appeals through the past five years to courts — both religious and civil — have failed to settle the feud.

“It is a matter of prestige,” Berkovitch said. “Because of the high sanctity the place carries, and the very large number of visitors, controlling bar Yohai’s grave carries with it a great deal of prestige, which the groups want for its own sake.”

Both groups say that they are ready to build prayer houses and ritual baths to serve the million-plus pilgrims a year. The Sephardim say they would use a multimillion-dollar Safra legacy. The Ashkenazim say that even without this money, they have donors in England who will give $25 million.

The Sephardic trust, however, says that the Ashkenazim are driven less by a genuine interest in the site and more by the financial implications of control.

Even 1,900 years after his death, many potential donors believe bar Yohai to be a fully active miracle worker. They also think that donations to charities linked to him will bring them special benefits. This means that showing tangible claim to the gravesite through buildings could be extremely lucrative.

The Ashkenazic trust is battling for control “because they want money. That’s the name of the game,” Shalvash said in an interview with the Forward. Guberstadt flatly denied the claim.

The battles frustrate politicians and many of the people on the ground at Meron.

The prevailing opinion in the Israeli government is that it should take control of the site, an inside source said.

On Meron, Rabbi Shraga Shnitzer suggests a different solution. Shnitzer, head of the independent charity Ohel Ha’Rashbi-Meron, which provides free food to visitors, believes that decisions about the site’s future should be placed in the hands of the most respected contemporary halachic authorities, the gedolei hador.

He said, “Ashkenazim and Sephardim need to sit together with gedolei hador who will come to the place and hear from everyone at Meron and decide what is allowed to do and what it is not allowed to do.”