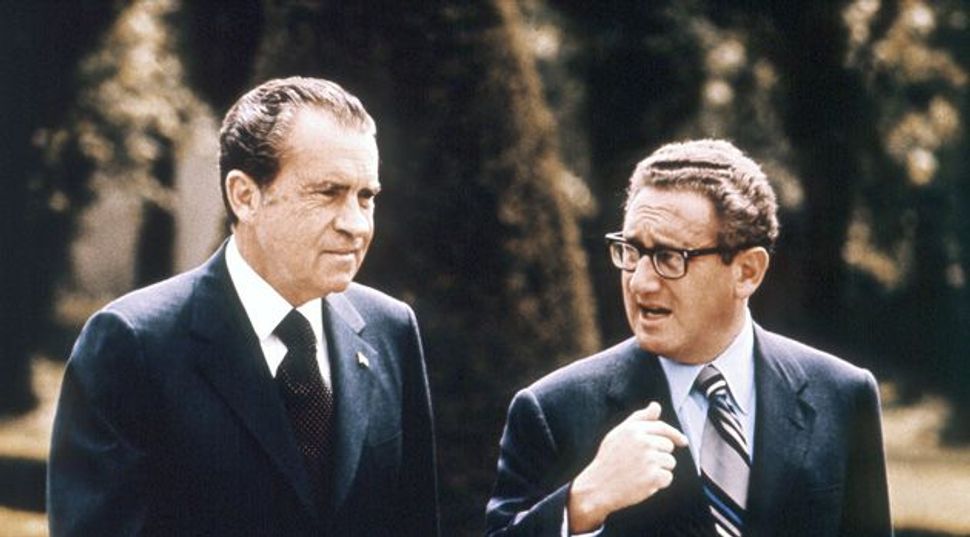 Realpolitik: Despite his frequent anti-Semitic outbursts, President Richard M. Nixon trusted Henry Kissinger as one of his closest advisers and the architect of detente, his foreign policy approach. Image by Getty Images

Among the many enigmas that have surrounded Henry Kissinger over the years is the question of how he, a German Jew, managed to survive in the Nixon White House, a place where he was called “Jew boy” to his face.

Now, with the release of a new batch of Nixon tapes, revealing more of the strangely noxious and bigoted environment inside the Oval Office, comes something of an answer: Kissinger couldn’t beat them, so he joined them.

“The emigration of Jews from the Soviet Union is not an objective of American foreign policy,” Kissinger is heard saying in a March 1, 1973, conversation. “And if they put Jews into gas chambers in the Soviet Union, it is not an American concern. Maybe a humanitarian concern.”

It is a shocking phrase, one that reveals much about Kissinger. There is the psychological element: A Jew who had reached such incredible heights under a man who clearly had a paranoid view of Jewish power felt he had to overcompensate to prove where his loyalties lay. It also offers a view into the darkest consequences of Kissinger’s political philosophy, an extreme realpolitik kind of thinking that sacrificed moral or human rights concerns for the sake of building strategic geopolitical relationships. And finally, it tells us about Kissinger’s relationship with the American Jewish community.

Some context has been lost here, as Kissinger himself has made clear in a statement he released to the Forward. This 1973 conversation is in response to a popular Jewish groundswell of support for the Jackson-Vanik amendment, legislation that offered assistance to Soviet Jews and at that moment posed a threat to Kissinger’s entire foreign policy strategy, detente. He was frustrated and angry that Jews were the ones sabotaging, as he saw it, his delicate attempt at stabilizing the world through weaving “an intersecting web of interests” between the two Cold War enemies.

“I think that the Jewish community in this country on that issue is behaving unconscionably,” Kissinger said to President Nixon moments after his gas chamber comment. “It’s behaving traitorously.”

The Jackson-Vanik amendment was an attempt to steer American foreign policy away from detente and toward human rights. Soviet Jews, who had begun receiving exit visas in larger numbers in 1971 (13,000 got out — more than the past 10 years combined), were facing new restrictions in the summer of 1972. The Soviets had implemented a “diploma tax” requiring the Jews to pay back exorbitant sums to the Soviet government for the education that had been provided by the state. This seemed like a form of ransom.

In response, Democratic cold warrior Henry Jackson, a senator from Washington State, came up with his formulation. As part of detente, Nixon and Kissinger were trying to get Congress to approve a trade bill that would grant Most Favored Nation trading status to the Soviets. Jackson now proposed an amendment demanding that any nonmarket economy (by which he meant the Soviet Union) remove all blocks to emigration if it wanted to get MFN.

“In the beginning, this seemed like it would be impossible, in the realm of fiction,” said Mark Talisman, legislative aide to Charles Vanik, the Ohio congressman who sponsored the bill in the House. “Because in this real world, this terrible world we were living in, one in which realpolitik ruled, it seemed impossible that this could actually pass.”

But the bill quickly gained support among the grassroots activists of the Soviet Jewry movement, and eventually in the so-called Jewish establishment. By the time of that March 1973 meeting between Nixon and Kissinger, it had a majority of Congress behind it. In fact, Kissinger’s comments followed a meeting with Israeli Prime Minister Golda Meir in which both Kissinger and Nixon pleaded with her to tell the American Jewish community to back off the bill. “You must understand my situation,” Meir told the two men. “I cannot tell Jews in the United States not to concern themselves with their brethren in the Soviet Union!”

When Kissinger uttered those now infamous words, he was feeling like a “scorned lover,” said Jeremi Suri, professor of history at the University of Wisconsin and author of a book-length psychological profile of Kissinger, “Henry Kissinger and the American Century.”

Kissinger’s greatest enemy in this battle over Jackson-Vanik was Richard Perle, then a young legislative aide to Jackson who in later years would have positions of power in the Ronald Reagan and George W. Bush administrations. Perle coordinated the campaign for Jackson and worked hard to keep the Jewish community squarely behind the amendment.

“It’s not surprising that he was very angry,” Perle said when asked to comment on the new Kissinger remarks. “His hopes for detente were being jeopardized by Jackson-Vanik and by the Soviet Jewry movement generally. My guess is that he was saying this to Nixon so that Nixon would not for a minute think that Kissinger had a soft spot that might lead him to do less than the policy they had agreed on. The extremity of the statement was meant to show that he’s just a very tough guy who, like Nixon, had his priorities straight and was single-minded.”

What Kissinger did not know on March 1, 1973, was that almost three weeks later, on March 20, in Moscow, Leonid Brezhnev would conduct a meeting in the Politburo that showed the palpable effect that Jackson-Vanik was having on the Soviet leadership. Brezhnev told the Politburo, “At this particular time, when the Zionists have incited a campaign around the Jackson amendment and around granting us [Most Favored Nation] status, we need to let them out.”

Brezhnev demanded that there be more thought given to how to appease the “Zionists.” He chided his comrades that they were going to lose the benefits of detente. “Zionism,” he said, “is making us stupid.”

While Kissinger was trying to eliminate the pressure that the Soviet Jewry movement and the Jackson-Vanik amendment were applying, Brezhnev was clearly being affected by it. The day after the Politburo meeting, the Soviets canceled the diploma tax and invited cameramen to film Soviet Jews getting their exit visas without being forced to pay the tax.

This did not stop Jackson and Perle, who persisted with their amendment until it passed at the end of 1974. By that time, the Watergate scandal had brought an end to the Nixon administration, but Kissinger was still secretary of state under President Ford.

Kissinger opposed the amendment until the end. When it finally passed, and the Soviets, with a great pique, rejected the entire trade bill, Kissinger wrote, in a self-satisfied letter to a Jewish leader, “When the Soviet Union looked at the totality of what it had to gain from the trading relationship we were able to offer, as against what it considered intrusions in its domestic affairs, it drew the balance sheet of which we have the results today.”

To this day, Kissinger insists that his approach to saving Soviet Jewry — by first reaching a stable relationship with the Soviets and working through back channels — was the correct one.

In his only response to the gas chamber comment, Kissinger said in a statement that these words “must be viewed in the context of the time.”

He believes that his quiet diplomacy, which he calls a “humanitarian approach” as opposed to a “foreign policy” one, was responsible for the first wave of emigration in 1971 and 1972, when the numbers reached nearly 13,000 and 32,000, respectively. He then writes, “We feared that the Amendment would reduce emigration, which is exactly what happened. Jewish emigration never reached the level of 40,000 again until the Soviet Union collapsed. The conversation between Nixon and me must be seen in the context of that dispute and of our distinction between a foreign policy and a humanitarian approach.”

But Kissinger is wrong here about the numbers. In the immediate aftermath of the trade bill’s collapse, the Soviets did reduce the level of emigration, but then it spiked in 1979 to 51,000, well above 40,000. The reason was simple: The Soviets wanted a grain deal with the West, and they were hoping to get a new arms limitation treaty ratified. Jackson-Vanik had taught them an important lesson. If they wanted something from the United States government, they should release their Jews. And that’s what they did.

All this history is lost in the shock of Kissinger’s outburst. But it is important. This is not just a man trying to appease his anti-Semitic boss; it is also an expression of anger and frustration at his own people who have failed to understand and follow him and his strategy for peace, preferring instead to, as Nixon put it, “blow up the world” for a human rights issue. On the tape, Kissinger can be heard pounding his fists against a table as he says the words that will now stick with him forever.

Gal Beckerman is the author of “When They Comes for Us, We’ll Be Gone: The Epic Struggle To Save Soviet Jewry.” Contact him at [email protected] or on Twitter @galbeckerman