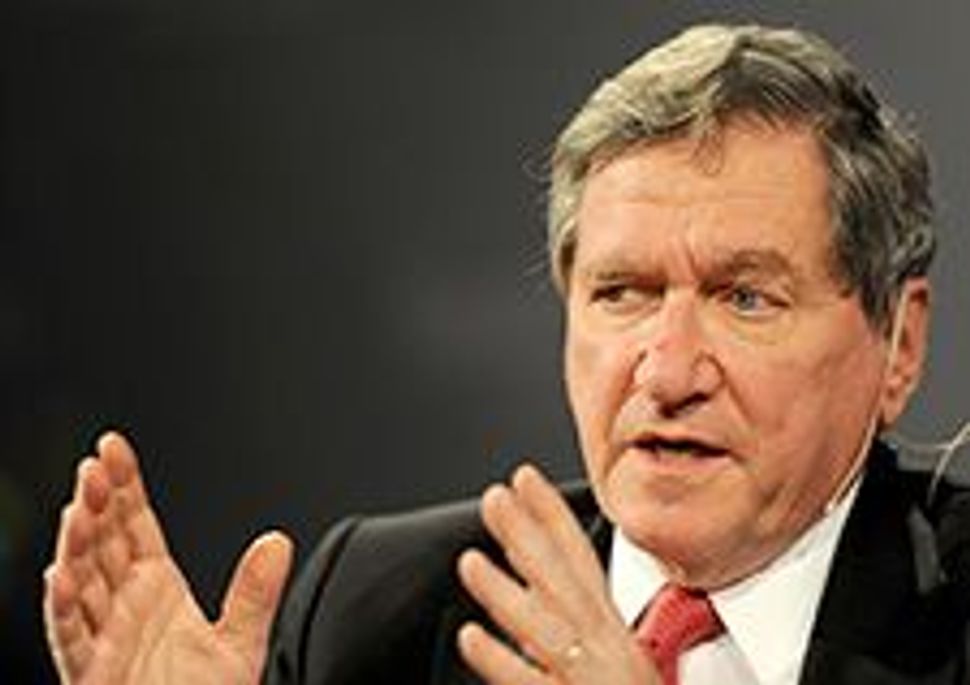 Champion: Richard Holbrooke championed the cause of Holocaust survivors and refugees. Image by Getty Images 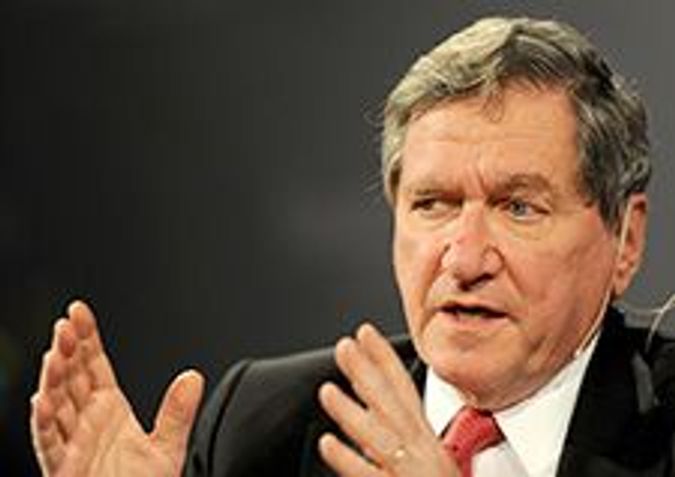 Champion: Richard Holbrooke championed the cause of Holocaust survivors and refugees. Image by Getty Images

It is less well known that the Jewish people have lost a great champion of justice for Holocaust survivors and for refugees the world over.

In the summer of 1976, while serving as policy director for Jimmy Carter’s first presidential campaign, I recruited Dick Holbrooke to be our in-house foreign policy adviser. I did so at the recommendation of virtually every major foreign policy expert upon whom we relied, from Cyrus Vance and Zbigniew Brzezinski to W. Averell Harriman. Holbrooke was already a rising star of the next generation. In the foreign service, he took on the most difficult assignments and worked for six years directly in Vietnam or on Vietnamese issues. This included serving in the treacherous Mekong Delta; in Saigon as assistant to Ambassadors Maxwell Taylor and Henry Cabot Lodge, and, at the tender age of 24, on a special White House team of Vietnam experts appointed by President Johnson. In 1968 he served on the U.S. delegation to the Paris peace talks, headed by former New York Governor Harriman and former Deputy Secretary of Defense Vance. This directly led to them recommending Holbrooke to me.

Holbrooke had an office just two doors from mine in the Carter campaign headquarters in Atlanta, so I saw up close the remarkable talents he brought to every job — indefatigable energy, tireless determination, and a brilliant capacity to meld domestic political considerations with a deep understanding of foreign policy. He helped me prepare Jimmy Carter for three presidential debates. And it was he who immediately understood the huge gaffe President Gerald Ford had made in one debate with Carter in asserting that the Soviet Union did not dominate the Communist East Bloc. With his wide press contacts and credibility, he helped shape the message that turned the presidential campaign around, neutralizing the greatest advantage the incumbent president had over a one-term governor from Georgia: namely his supposed foreign policy expertise and ability to keep America safe.

During the Carter administration, Holbrooke became the youngest person ever to hold the position of assistant secretary of state for East Asian and Pacific Affairs. He was responsible for some of the most difficult policy challenges in the administration, including managing relations with our most important Asian ally, Japan, and with Communist China. He was deeply involved in the secret negotiations leading up to the normalization of relations with China in December 1978, and in preparing the historic first visit by a Chinese leader, Deng Xiaoping, to the White House. In fact, Holbrooke was in the Cabinet Room when Deng, who wanted Most Favored Nation status for China, told President Carter that he knew the Jackson-Vanik law had prevented the Soviet Union from receiving MFN status because of Soviet restrictions on Jewish emigration. With a smile, Deng declared, “Mr. President, we do not restrict Jewish emigration. Here is a piece of paper and a pencil; you write on it the number of Chinese you would like us to send you each year –1 million, 10 million, 20 million!”

But Holbrooke’s heart was especially given over to one issue: helping to bring hundreds of thousands of Vietnamese and Indochinese refugees from great danger in their homelands to safety in the United States after the Vietnam War. I thought I knew Holbrooke well, but I did not understand why he had such a passionate interest at that time. It was in learning about Holbrooke’s life-long interest in helping refugees around the world years later that I appreciated his Jewish connection.

During our time together in Carter’s campaign headquarters and then in Washington I had not known that both his mother and father were Jewish refugees, his mother from Germany, his father born to Russian Jewish parents in Warsaw. Perhaps this was because Holbrooke had not been raised Jewish. His mother, I learned later, had gravitated for a time to Quakerism. And Holbrooke himself was raised thoroughly secular.

My first realization came during the Clinton administration, when he was serving as U.S. ambassador to Germany at the same time as I was serving as U.S. ambassador to the European Union in Brussels. Holbrooke organized a dinner in honor of my wife Fran and me in his official residence in Bonn. When we arrived, I noticed at the entrance an old photo of a German in World War I military uniform, with full regalia, including the distinctive sharp pointed hat of an officer. Who was this, I asked him, and why was his picture placed so prominently at the residence’s entranceway?

“Stu, that is my Jewish grandfather,” he said. “He served as an officer in the German army in World War I. I keep it here, so all of the Germans who pass through this U.S. residence will damn well realize what they lost when they killed all the German Jews.”

Holbrooke’s deep interest in the development of post-War Germany, including his role in creating the American Academy in Berlin, which he later chaired, was undoubtedly due to this history.

His Jewish connection deepened shortly thereafter, when Secretary of State Warren Christopher appointed him assistant secretary of state for European and Canadian affairs. History will remember Holbrooke most of all for his remarkable negotiation of the Dayton Peace Accords during this time, ending the Bosnian civil war. I believe he came out of private life then at President Clinton’s request because he saw it as a way of stopping “ethnic cleansing’ and another European genocide.

But for me, he will be remembered for something else then: changing my life, and that of millions of Holocaust victims and other victims of Nazi oppression. When Holbrooke took up his post as assistant secretary in 1994, I was still U.S. Ambassador to the European Union in Brussels. “Stu, you were my boss in the Carter years, and now I am yours,” he joked when he called me from Washington. “I have a request to make.”

I was floored by what came next. He told me that Edgar Bronfman and Israel Singer, leaders of the World Jewish Congress, had come to his State Department office and told him that the emergence of new democraties in Central and Eastern Europe since the collapse of Communism offered the United States an historic opportunity to rectify the injustices of World War II. They had urged him to select a special envoy on property restitution to encourage the new democracies to return synagogues, schools, community centers, and even cemeteries to the remnants of the Jewish communities of Europe now finally able to practice their religion after decades of Communist repression. Holbrooke noted the special urgency this held for Europe’s Jews, who had lived through the 20th century’s twin evils, Nazism and Communism. He wanted me to take on this task.

I am certain that his already deep interest in helping Holocaust survivors was enhanced by his relationship with Kati Marton, the talented writer he wed in 1995. Born in Hungary, she had only recently discovered her own Jewish roots, which her parents had kept from her after they survived the Holocaust, the advent of Communism and the 1956 Hungarian revolution, and then fled to the United States with their children.

I asked for a few days to consider Holbrooke’s offer, given my full-time job as ambassador. My staff at the United States Mission to the European Union unanimously objected, saying the additional duties would divert time from my already stressful work and that the position would be unlikely to succeed. The governments with whom I would be dealing would object to returning properties they controlled, my staff warned, and even America’s ambassadors to those countries would be unhappy about my intrusion on their turf regarding an unpopular issue. But just as I had grown to know Holbrooke, he had come to know me. He knew, among other things, of my own deep interest in Holocaust justice and of my recommendation to Carter of a presidential commission on a Holocaust memorial in Washington, headed by Elie Wiesel, which led to the United States Holocaust Memorial Museum.

Fran and I felt I could not turn this assignment down. I called Holbrooke back and told him I would take the job, but that I would need his full support with our own ambassadors and the European governments with whom I would be dealing. He gave me his word, and once I took the job, he always backed me up. This eventually led to $8 billion dollars in restitution for some 1.5 million victims, Jewish and non-Jewish, of the Third Reich, for slave and forced labor, unpaid insurance policies and the return of property and looted art. None of this would have been possible without the initiative of Richard Charles Albert Holbrooke.

Nor, for that matter, would Israel be enjoying enhanced stature at the United Nations today absent his labors. In 2000, it was Holbrooke’s advocacy as U.N. ambassador in the Clinton administration that secured Israel’s inclusion in the regional grouping of European countries at the U.N. This came after decades in which Israel had been excluded from the Middle East group by hostile Arab states. Israel’s membership in the European group has increased its role at the world body since much of the work there goes on in these regional groupings. As Israel’s U.N. envoy, Meron Reuben, confirmed to me, Holbrooke’s tireless effort made this happen.

We are immeasurably saddened by Holbrooke’s death on December 13, but thankful for his lifelong commitment to justice for refugees and victims, Jewish and non-Jewish, and for using his enormous talents to help make this a better world.