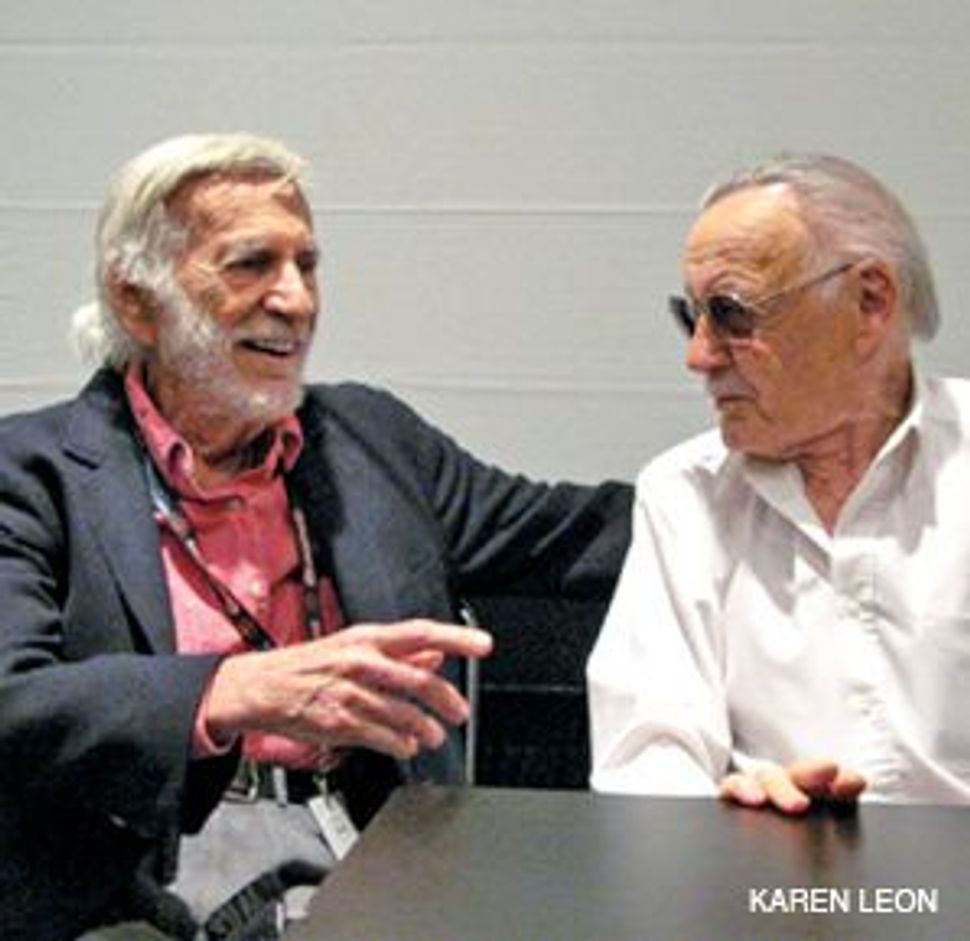 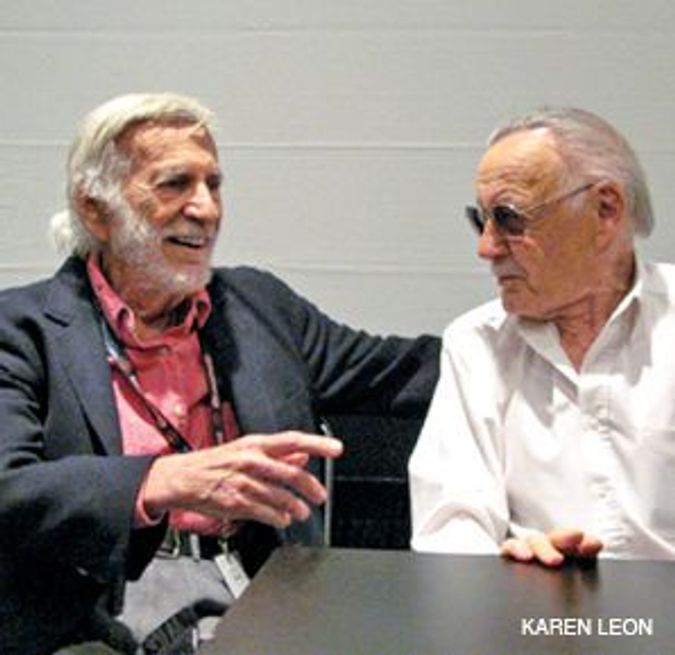 Michael Uslan, executive producer of the Batman movies, hailed the nine panelists at the “The Legends Behind the Comic Books” forum, for which he served as moderator. Uslan called the forum, which was held at the Jacob Javits Center as part of the recent New York Comic Con event, a “once-in-a-lifetime gathering” and said that the panelists are “the greatest living creators in the history of comics.” They included Joe Simon, co-creator of “Captain America;” Jerry Robinson, co-creator of the Batman character The Joker”; Stan Lee (nee Stanley Martin Lieber, son of Romanian Jewish immigrants) co-creator of Spider-Man and Iron Man, and height-challenged Irwin Hasen, creator of the comic strip “Dondi.” Hansen said, “Comic books prepped me for drawing Wonder Woman and started me out on a history of going out with tall women.” Uslan proclaimed Lee “the Shakespeare of comic books. Lee revolutionized the genre and made comic books cool.” When asked what his greatest achievement was, Lee said: “I think it is for posterity to determine.… My wife would probably say it’s the allowance I give her.” Robinson would later tell me: “We spoke English at home, but my father read the Forward and took the greatest delight in translating the Yiddish jokes from the Forward. My great-grandfather, who came from Russia, lived to 116 — the oldest man in New Jersey and maybe in America at the time.” He then said, chuckling, “You know, bankers used to hide the comics in The Wall Street Journal.”

Addressing Simon, Uslan noted: “In the era of Roosevelt, you created Captain America. In the era of George Bush [Sr.], Captain America was murdered.” Simon replied: “I think Captain America should come back to the original. recover the real spirit… I am the oldest guy here. Stan Lee is my brightest student… at the top of the heap.” Simon added, “Doing cartooning is trying to make a living without a parachute.” When asked, “Who is the most creative person you worked with?” Robinson replied, “Stan Lee.” Lee, in turn, told the fans in the room, “I’ve always been in awe of these guys on the panel.”

Regarding Simon, Lee said: “He is a wonderful artist… I saw the first copy of ‘Captain America.’ Joe has not gotten enough credit.” Then, in an aside, he joshed, “Joe taught me to smoke cigars and yell at people.” Simon added: “I worked with Jack Kirby on ‘Captain America’ for 25 years. The first issue, published in December 1940, has Captain America punching Hitler in the face. He created a whole new category of art and action.”

Jack Kirby, who died in 1994, was born Jacob Kurtzberg to Jewish Austrian parents and grew up on New York City’s Lower East Side, in the Delancey Street area. His father, Benjamin, a Conservative Jew, was a garment-factory worker.

Hasen informed: “The minute I was born, I knew I was going to do a comic strip. Dondi was my alter ego. Doing a syndicated comic strip is a labor of love.”

Robinson curated the recent exhibit The Superhero, the Golden Age of Comic Art 1938-1950 at New York’s Jewish Museum. He told me that the exhibit is now on display at the Bremen Heritage Museum in Atlanta and will move on to the Jewish Museum in Miami Beach. On a personal note, outside of school, my supplementary English reading sources in Montreal were — to my mother’s dismay — American comic books, including the first issue of “Captain Marvel” (which, regretfully, I did not save). After school, when I attended classes at the Workmen’s Circle/Arbeter Ring synagogue on St. Lawrence Street, I assigned my mother the responsibility of listening to the daily radio installments of Milton Caniff’s “Terry and the Pirates.” My daughter Karen, a professional cartoonist [and this column’s photographer], studied with Robinson. Animated sequences of her military comic strip are included in a film edited by HBO, used to entertain troops overseas and wounded veterans in hospitals abroad and stateside.

DANCING WITH SHLOMO CARLEBACH AT THE POLISH CONSULATE

The musical “Shlomo,” based on the life and music of Rabbi Shlomo Carlebach, was showcased last month at the Museum of Jewish Heritage. It brought back a Carlebach memory. The happening took place in March 1993 at the Polish Consulate in New York during a commemoration of the 25th anniversary of the March 1968 antisemitic epidemic that had sent thousands of Jews into exile. Consul General Jerzy Surdykowski decried “that sad and shameful moment in Polish history” and vowed “to pay symbolic tribute to all victims of antisemitism, no matter where or when it occurred.” He then announced to the guests (among whom were several Polish Jews who had fled Warsaw in 1968), “You are in for a treat!” And there was bright-eyed and bushy-bearded Shlomo Carlebach! Strumming his guitar and singing ecstatically, Carlebach insisted that everyone join him in “ya-ba-baying,” hand-clapping and dancing. As Surdykowski joined the bearded and yarmulke-clad men snaking through the consulate’s gilt and mirrored rooms, Teresa Surdykowski, his wife, followed the women and me in a separate chain. Carlebach whispered to me, “This is unbelievable!” For me, born in pre-World War II Warsaw where antisemitism flourished, this was an almost surrealist moment.

Still, I want to underscore that my mother and I owe our lives to a Polish woman who risked her safety, as well as that of her family, to hide us. She was one of thousands of Poles who defied the Nazis and certain execution to save Jews. Among such extraordinary souls was Irena Krzyzanowska Sendler, a member of the Polish underground movement Zegota. Sendler helped save 2,500 Jewish infants and children whom she smuggled out of the Warsaw Ghetto in suitcases, baskets and coffins, and whose true identities she secreted on slips of paper in a jar that she buried, making it possible to later reunite some of the children with those parents who had survived the Holocaust. Sendler died last week in Warsaw at age 98.

It is a case of art imitating life. In 1943, Zakynthos’s bishop, Chrysostomos, and the island’s mayor refused to provide the German occupation authorities with a list of the Jews on Zakynthos. Instead, they submitted only their own names. Remarkably, there was no loss of Jewish life on the island. In “Fugitive Pieces,” Jeremy Podeswa’s haunting new film based on the novel by Anne Michaels, Zakynthos is where Young Jakob (Robbie Kay) is brought by Athos (Rade Serbedzija), a Greek archaeologist, who, while on a dig in Poland in 1942, rescues the boy after the Nazis have slaughtered his family. With flashbacks and flash-forwards, brutality explicit and implied, this beautifully nuanced film luxuriates in memory and survivor pain. Athos’s compassion and gentleness are a template for anyone dealing with a trauma-obsessed child. And it is to Zakynthos that the adult Jakob returns to find resolution for a lifetime of haunting memories that blocked love and creativity. Jakob is sensitively realized by Stephen Dillane (who portrays Thomas Jefferson in the recent HBO stunner “John Adams”).

In Canada, Jakob befriends a survivor family whose young son, Ben (later portrayed in adulthood by Ed Stoppard), is traumatized when his father, a camp survivor, goes ballistic when the boy throws out a half-eaten apple. It is one of a number of intelligently structured scenes that will long resonate for those who are survivors themselves or who have parents who are survivors. The film is visually lovely, and its heartwarming resolution — including a luscious gastronomic love scene — adds to its poignant pleasure. Among the film’s memorable lines are Athos’s words to Young Jakob: “You need to be buried in ground that will remember you.” Even those “tired” of Holocaust films will find “Fugitive Pieces” a rewarding, emotional journey. See it!

Podeswa, a son of survivors, boasts a directorial résumé that includes a number of episodes of HBO’s “Rome” and the network’s Emmy-winning series “Six Feet Under,” Showtime’s “The Tudors” and “Queer as Folk,” FX’s “The Riches” and “Nip/Tuck,” and the final two-hour movie of the miniseries “Into the West,” set in the 1890s and produced by Steven Spielberg for DreamWorks Television and TNT.