Does Declaring It ‘Palestine’ Lead to a State? 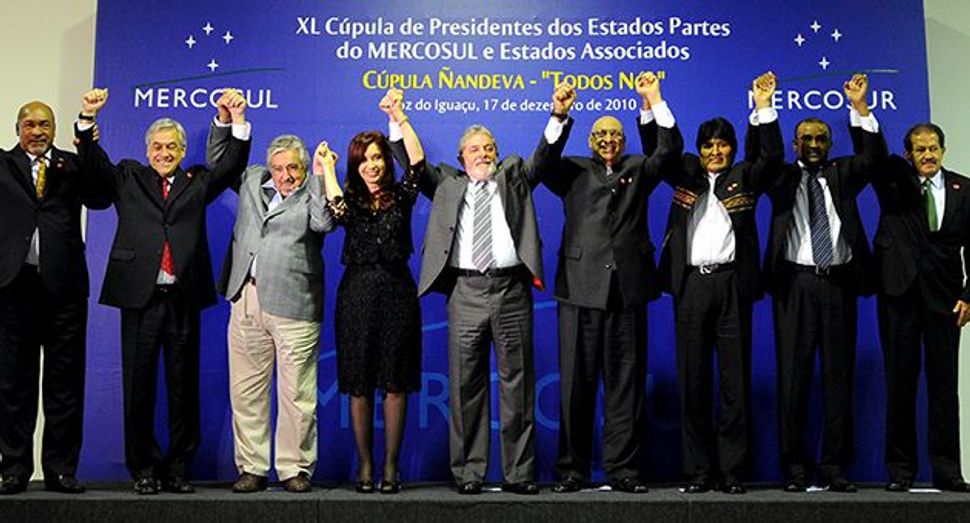 As peace talks between Israel and the Palestinian Authority remain at an impasse, the Palestinians seem to be moving closer to their ultimate goal on a separate front: international recognition of their own independent state.

In just the past few weeks, Argentina, Uruguay and Bolivia have recognized Palestine within the borders that separated Israel from the territories before the 1967 Six Day War. These recognitions follow Brazil’s example from earlier in the year.

Saeb Erekat, the longtime chief Palestinian negotiator, also recently announced that 10 undisclosed states of the European Union would soon upgrade Palestinian representation in their countries, moving them closer to becoming full-fledged embassies. Norway has in fact already announced in December that the Palestinian “general delegation” will be upgraded to a “diplomatic mission.”

This string of diplomatic achievements suggests to some that the Palestinians are pursuing a unilateral route to statehood, turning this international legitimacy into a fait accompli. And the recent moves have certainly annoyed Israelis and Americans for just this reason.

But veteran observers of the conflict think that it would be a mistake to confuse what are essentially symbolic gestures with a unilateral declaration of any sort.

“I don’t think the Palestinians are driven by a strategy to actually declare statehood at this stage,” one former Israeli official said. “Ultimately, a state that doesn’t resolve [the status of] Jerusalem or the refugee issue is problematic from their perspective. It would not be all that different from the provisional state idea which the Palestinians have consistently rejected.”

This has not, however, stopped these recent moves from being denounced by both Israelis and American officials. On December 15, the House of Representative unanimously passed a resolution calling on the administration to “deny recognition to any unilaterally declared Palestinian state and veto any resolution by the United Nations Security Council to establish or recognize a Palestinian state outside of an agreement negotiated by the two parties.”

But it’s not clear that these recent Palestinian moves actually circumvent negotiations or undermine the peace process, as critics charge. Some observers see them as simply contributing to the openly stated effort by P.A. Prime Minister Salam Fayyad to build the infrastructure of statehood so that the Palestinians are ready for the day when negotiations do lead to a resolution.

“There is no end run around a negotiated settlement between Israel and the Palestinians, brokered by the Americans,” said Hussein Ibish, a senior fellow at The American Task Force on Palestine. “What we have seen lately is a kind of bilateralism, with the Palestinians building up their relationships internationally. It also solidifies the idea of a Palestinian state as inevitable. But all of this is of a piece with what Fayyad is attempting on the ground.”

Ibish points out that the Palestine Liberation Organization declared statehood in 1988 and that it effected absolutely no change in the Palestinian situation. Though Argentina’s announcement made news, it joined 103 other countries that, according to the Palestinian diplomatic mission at the United Nations, have recognized Palestine over the past two decades.

Fayyad himself has insisted that he is not interested in a unilateral declaration and that the type of international recognition that is gaining support should not be mistaken for a move by the Palestinians to bypass negotiations.

Many people have mistaken Fayyad’s pinpointing of August 2011 as a date when the Palestinians will be prepared to take on the responsibilities of independence as an ultimatum. But in his public statements he has never stated it in these terms.

According to a former senior Israeli official, who spoke to the Forward on condition of anonymity, the recent push toward South American and European recognition might be more the work of the old guard of Fatah, which for decades was focused on these types of symbolic achievements.

“Fayyad represents a different trend,” the former senior Israeli official said. “He wants to create momentum and harness international support for building the actual foundations of the state. He is less interested than Fatah in symbolic gestures of recognition, and more interested in the manifestations of statehood in daily Palestinian life.”

Ibish agreed with this analysis, calling the search for recognition “more of a piece with the Arafat era in which Palestinian nationalism was concerned with the grand gesture and grandiloquence.” The new Fayyad era is a “paradigm shift away from this traditional Romantic style.”

The goal of countries like Argentina might not necessarily be to undermine the peace process, observers also said. It might be more an indication of dissatisfaction with the stalemate in peace talks and an attempt to prod it along.

In Argentina, the decision to opt for recognition was taken by Foreign Minister Hector Timerman, son of Jacobo Timerman, the Argentinean political prisoner who gained refuge in Israel and died in 1999.

At a press conference December 6 announcing his initiative, Timerman explained that Argentina was “deeply frustrated” by the impasse and saw its move as “based in the desire of its authorities to favor the process of negotiation aimed at ending the conflict.”

He also reaffirmed Argentina’s “irrevocable position in favor of the right of Israel to be recognized by everyone and to live in peace and security within its borders.”

Does Declaring It ‘Palestine’ Lead to a State?