Eritrean Tells of His Cruel Odyssey to Israel 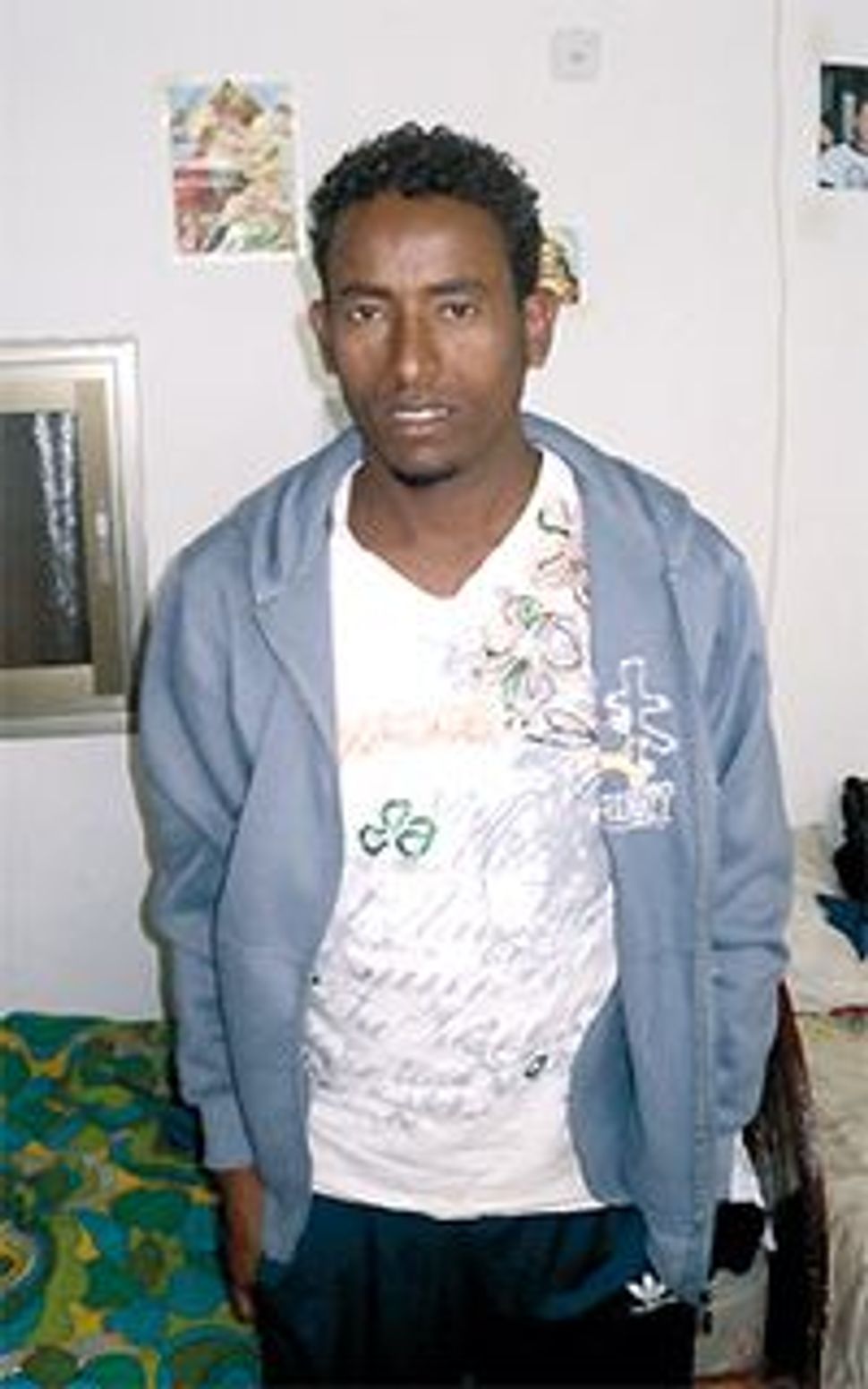 Survivor: Mekonen Kefete, at home in Tel Aviv, says he was kidnapped and tortured by African traffickers. Image by Nathan Jeffay

On a bed in his tiny shared apartment in Tel Aviv, Mekonen Kefete bares his right leg to illustrate the story of his journey to Israel. It is dotted with dark black marks where red-hot iron bars were cruelly poked into his skin. 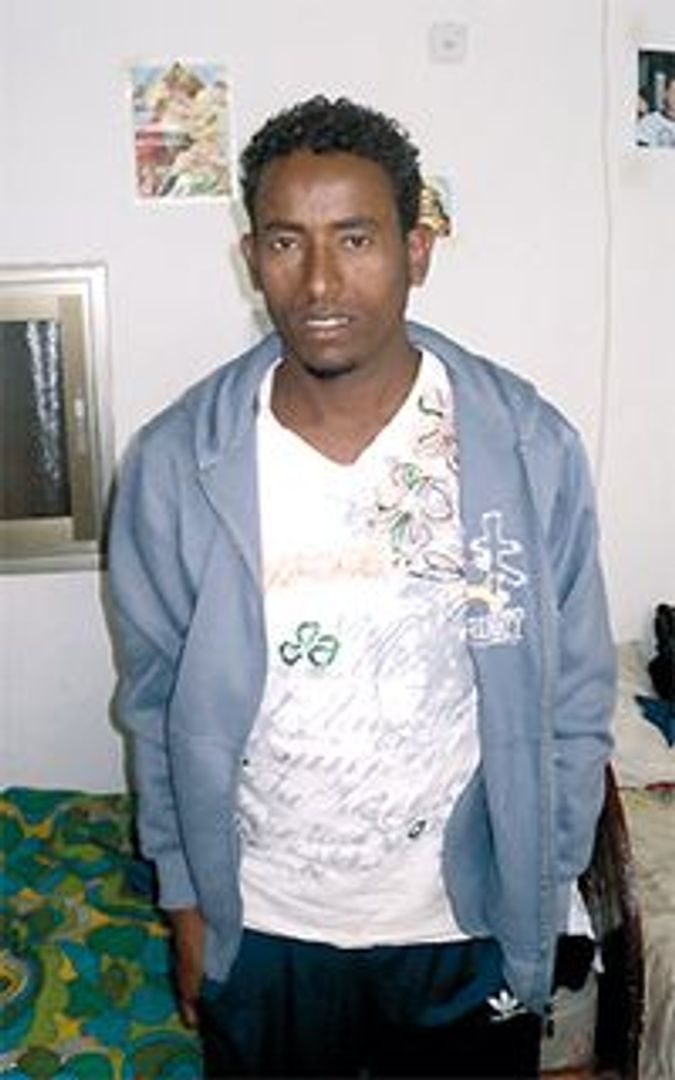 Survivor: Mekonen Kefete, at home in Tel Aviv, says he was kidnapped and tortured by African traffickers. Image by Nathan Jeffay

Kefete, 26, fled his native Eritrea a little more than a year ago, destination unknown, to escape an open-ended draft in the country’s army. After the eight-hour trek from Eritrea to Sudan, he related, traffickers forcibly detained him, ordered him to pay $500, decided that his destination was Egypt’s border with Israel and said they were taking him there.

This was just the start of a three-month nightmare in which Kefete became a piece of chattel passed between different traffickers, beaten and abused daily as part of a scheme to extort money from relations and countrymen. “Every time that they beat me I was afraid they would kill me,” he told the Forward.

Kefete, who crossed over into Israel in late 2009, was one of the first victims of a violent new culture among the traffickers of Sudan and the Sinai who bring Africans fleeing their native lands to places where they can sneak into this country.

On the evening of December 21, a visit to a free clinic in Jaffa for illegal immigrants from Africa found dozens of recent arrivals waiting for consultations. In a makeshift consulting room, nurse Aziza Kidane was visibly shaken. “I’ve been working in England with refugees and have never heard the stories I am hearing here — not even in horror films have I seen such things,” she said.

Since 2005, there has been an influx of Africans to Israel. The vast majority who arrive today come from Eritrea, where the country’s 18-month national-service obligation has been indefinitely extended, and where religious and political freedom is limited. An April 2009 Human Rights Watch report found “human rights violations by the Eritrean government, including arbitrary arrest, torture, appalling detention conditions, forced labor, and severe restrictions on freedom of movement, expression and worship.”

More than 35,000 illegal African immigrants have reached Israel via Egypt, and most are thought to have paid traffickers at some point to help with their journeys. The traffickers did their part, but in early 2010 Israeli medics began to see signs of a sinister new business venture: Sinai traffickers holding their prey for ransom for large sums and using extreme abuse to nudge such “deals” along.

Kidane’s clinic, which is operated by the nonprofit Physicians for Human Rights-Israel, first noticed in January a surge in requests for treatments commonly needed by victims of abuse, such as orthopedics. In October, PHR-Israel began surveying patients asking what really went on in Sinai, and the results were shocking: Of 167 people interviewed, 77% said they had been physically assaulted and some 38% of women said they had been sexually assaulted.

The aim of the abuse is simple: Extract as high a price as possible from relatives and anybody else who will pay to release the captives. “From the picture we see here, in Sinai there are camps of extortion, exploitation and torture,” said Ran Cohen, the nonprofit’s executive director.

Officials at both PHR-Israel and the Hotline for Migrant Workers, which advocates on behalf of the illegal African immigrants, said that PHR’s survey data suggest that the traffickers reserved the worst extortion and violence for Eritreans (and a small number of Ethiopians who make the journey). Sudanese, the other main group fleeing their homeland, are mostly Muslim and Arabic-speaking, like the Sinai traffickers themselves, and less subject to harsh treatment.

Cohen estimated that since late 2009, when the traffickers turned to extortion and violence, 6,000 to 7,000 Eritreans have entered Israel, almost all of them with help from the traffickers. The majority reported being subjected to abuse, he said.

For some, medical attention in Israel heals their wounds. Others bear more difficult burdens, such as pregnancy. “Today was very terrible,” Kidane said, sadly. “I interviewed five people. One lady was sexually abused for 15 days, she was pregnant and the [Israeli] government helped her to get an abortion. She was abused by many, many men.”

Kidane observed, “She’s married and has children and said, ‘I never dreamed this could happen to me.’”

As of November, Kidane’s clinic facilitated 165 abortions this year. She suspects that half were requested by women who had been sexually assaulted in Sinai.

The sexual nature of the abuse in Sinai first became clear in March, when volunteers from the Hotline for Migrant Workers visited Saharonim prison in southern Israel, where infiltrators are detained. They interviewed six female infiltrators, selected at random by prison wardens, and found that only one was without complaint regarding the smugglers’ behavior.

One of the women said she had been held by smugglers in the desert for three weeks and was raped numerous times during this period. Two women said that traffickers had hurt them on the way, and while neither of them gave details, one asked to see a doctor saying that she had vaginal pains and had not menstruated during her three months in detention. Two other women said that the smugglers tried to rape them, but that the men in their group prevented them from doing so.

Kidane, a soft-spoken Eritrean-born British nun, is deeply affected by the information she hears from male and female patients alike. “It makes me sad, I feel so sad,” said Kidane, whose order sent her to Tel Aviv five months ago to volunteer at the clinic. “They feel helpless and I feel the same.”

In Kefete’s case, the maltreatment started soon after he handed over the initial $500 that his captors demanded. Deeply traumatized by his experience, Kefete was hazy on some of its details. But he remembers that soon after leaving Sudan in their car, the traffickers told him to hand over another $2,000. This was the last of his money, which he had secreted in his toothpaste tube.

They then demanded $5,000 more, and that’s when the abuse began. They encouraged him to use their phones to call people who could pay. His family in Eritrea, in turn, called relatives in America, who paid $2,000, and people from his village who had made it to Israel, who came up with $1,000.

Kefete was held in one location for about two months, then transferred to another with different traffickers for another month. At the first site, he said, there were 17 people: four women and 13 men; in the second, about 20 people.

He recalled a daily routine that consisted of a wake-up call followed by beatings around the face with shoes and on the legs with a wooden pole. The prisoners then were shackled together to work as a chain gang. While some who were trafficked reported being shipped to towns as slaves for building or cleaning, Kefete was not.

On several occasions, Kefete saw bodies of people from other nearby camps who had died from beatings. The bodies were left on the ground for several days. He thinks the message was: “You see them? You’ll be like them, too [if you don’t meet our demands].”

Eventually, after about three months, prompted, he believes, by the realization that there was no more money to be made from his chain gang — his group was put into vehicles and each person was given $50. They were dropped near Egypt’s border with Israel and told to run.

Egyptian soldiers shoot at people trying to cross the border, and he was shot in the right leg. Inquiries when he reached Israel led Kefete to believe that of the Eritreans at the border with him — he does not remember how many there were in addition to his gang — two were held by Egyptian police and two were killed by soldiers’ bullets.

The young Eritrean regards his arrival in Israel as the end of his nightmare. Israeli authorities picked him up and took him to the Soroka Medical Center in Beersheba, where he stayed for 10 days, three of them unconscious, as a result of his wound. His treatment was free.

He was then transferred to detention facilities at the nearby Ketziot prison, soon afterward back to Soroka and then once again to Ketziot. He stayed in Ketziot for three months until he found an Israeli willing to sponsor him in the country — a requirement that Israel has since dropped. Kefete considers his treatment by the Israeli authorities, including the medical care in Ketziot, to have been good. Now, he works collecting garbage on one of Tel Aviv’s municipal refuse trucks.

Today, Kefete is glad that he left Eritrea, but “when I was being beaten, I was sorry I left,” he said.

Most people with stories like Kefete’s or those of Kidane’s patients refuse to talk to journalists, in part due to a fear of recrimination and in part because they do not want to relive the traumas. But the survey conducted by PHR-Israel provides insight into their experiences.

People from Eritrea or Ethiopia paid traffickers — or had paid on their behalf — an average of $2,672, the survey indicates; those from other countries, mostly Sudan, paid an average of $741. Almost half of the 167 immigrants PHR surveyed reported being locked up or tied up. Most were kept in buildings; some were kept outside, in caves or containers.

Eritreans and Ethiopians recounted the harshest treatment. Some 94% and 74%, respectively, wrote that they were deprived of food and water. Their average stay in Sinai was 15 days. In addition to the 77% who were beaten, 10% were burned or branded; 8% were buried in sand or soil; and 8% were hung by their hands or feet.

Sigal Rozen, public activities coordinator for the Hotline for Migrant Workers, says she dreads to think what things will be like several months down the line. “I fear that the prices will just get higher and the abuse to secure them more intense and terrifying,” she said.

Eritrean Tells of His Cruel Odyssey to Israel